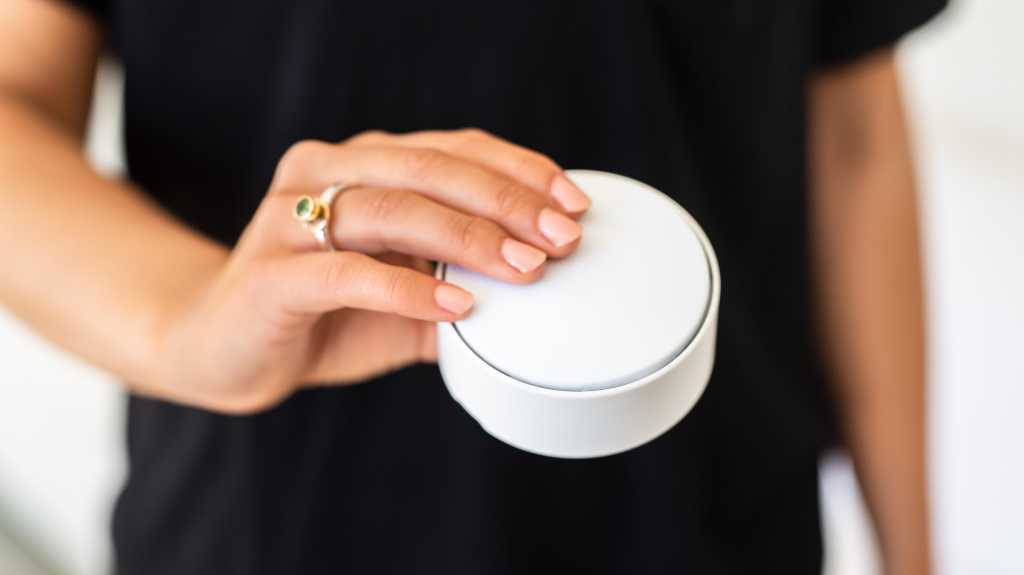 Minut is a very good alarm for people looking for simple, unobtrusive home security or those who don’t want cameras in their home. It monitors motion, noise levels, temperature, humidity and more and sends you customisable alerts. However, to get further functionality – like adding other users – you’ll need the £6.99/$7.99 per month subscription service, which we think is a bit too expensive for personal use.

It has an 85 decibel siren. It monitors temperature, humidity, air pressure, motion and sound. It calculates your property’s mould risk. It will alert you to other alarms that go off in your home, the sound of breaking glass and any attempt to tamper with it.

As a home security system, Minut is basically pretty chill. It doesn’t catalogue your every move. It doesn’t blow up your phone with alerts, as you can set thresholds and turn on notifications individually. It’s the kind of alarm that would make a good housemate.

It would also make a good landlord’s assistant. It’s a monitoring device that can give guests or tenants privacy (no cameras, no sound recording) but allow an Airbnb host or homeowner to keep a discreet eye on things. (Have the guests arrived? How noisy are they? Have they left the door open?)

If you want to use the device’s advanced functions, you’ll also need a Minut subscription. In the UK, this will cost you £6.99 per month. In the US, it’s $7.99 per month. We think that this is a pricey service for a single device. The equivalent service from Ring is £2.50 per month (or £24.99 per annum if you pay for a year in advance).

However, what we like about Minut is that a single user on a single phone can still use its features without a subscription.

The standard functions are motion, noise, temperature and humidity monitoring, a tamper notification, customisable alert thresholds and an alarm, all controlled by a free-to-download and use app. You’ll also have access to your monitoring data on a 90-day rolling basis. Minut can also recognise and alert you to the sound of glass breaking or another alarm going off in your home.

If you want to unlock more functionality, like adding another user with full access, or alerting neighbours when your alarm goes off, you’ll have to pay for a subscription.

Other subscription-only features are a multi-property web dashboard, unlimited data storage and access, and the ability to control your Minut via your Google Assistant.

To use Minuts at different properties, you’ll have to pay a subscription for each property. (If you want to buy more than one device,  head to the Minut site, where you can get bundle deals with significant savings.)

Minute is a white cylinder, 8cm across and 4cm high. It’s about the same size and shape as a creme caramel, although we are willing to bet it’s significantly less delicious. Its mount has an adhesive back, which you stick to your ceiling – although you have the option to screw it in, if you like to kick it old-school. The Minut fits onto the mount with a magnetic attachment. It’s a very neat set-up, allowing you to detach it for easy recharging.

The ceiling is the recommended spot for the Minut, although you can fit it elsewhere to monitor other items. If, for example, you’re always worrying about having left the window open or the hob on, you could place a Minut nearby and check the temperature data for reassurance.

Minut has a light ring around its circumference that illuminates in violet during the set-up process and, when pressed, in white once the set-up is complete. Most of the time, it’s not switched on but there’s a new feature on the app that allows you to use it as a motion-activated night light.

The app is available for both iOS and Android and getting going is quick and simple. You download the app, charge the device, connect it to your wi-fi and monitoring will begin.

The app is clearly laid out and intuitive to navigate. There’s a home page that features your profile, your homes (you can add more than one), integrations (in the UK, it’s currently only Google Assistant-compatible; US users can also add Alexa) and a support centre.

Then there are four main pages: the alarm; Minuts; groups, where you can add family members who’ll share full control of the Minut and friends who’ll get an alert if the alarm sounds and you don’t respond; and finally a log of events.

From the Minuts page, you can access data from all of the monitors.

What is really impressive about the app is the level of information you can access. We recently reviewed the Wave Plus radon detector and air quality monitor, and one of our issues with an otherwise good device was the fact that you have to go to a desktop dashboard in order to get a granular look at the data. Not so with the Minut, where you can tap on a day to get hour by hour readings of temperature, noise level and so on, as the following screenshots show.

In conjunction with the monitoring, you can set threshold alerts. So, for example, you’ll receive an alert if the noise level goes above 85 decibels, or the temperature drops below 22 degrees.

I used the decibel alert to let me know if my dog was barking while I was out. (He wasn’t as it happens, because he’s a very good boy.) An Airbnb host could use the same alert to let them know if their guests’ noise level was going to bother the neighbours.

There is also a window break alert, which detects the sound of breaking glass and a tamper alert, that lets you know if someone moved the Minut from its housing.

I discovered another great feature accidentally. My smoke alarm went off after an overzealous bit of cooking and the Minut detected it and sent me an alert. This means that, with the help of Minut, you can turn a dumb device like a smoke alarm into a smart one. Knowing that Minut would be able to alert me to a fire at home was a hugely useful and unexpected benefit of the device.

The manufacturers claim that Minut has a six-month battery life, which we can’t confirm, although it was still going strong after a month. It’s easily recharged with a USB-C cable and the charging process takes five hours.

Minut is compatible with Google Assistant in the UK and Google and Alexa in the US. There are plans to integrate it with Apple HomeKit. But these options are only available with the subscription.

We’d recommend the Minut as a low-key, low hassle alarm option. If you live in a flat with good building security, Minut could be the extra layer of safety you need for peace of mind. However, we’d recommend using it as a straightforward, solo alert service as we think the subscription, at almost £84 per year, is not worth the few extra features it gives you.

We also think that Minut would be a good fit for is landlords and Airbnb owners. The device provides security and information about your property, without infringing on guests’ privacy – or their rights – with cameras or sound recording. And if you’re using it to safeguard your business, the subscription service is probably a good investment.