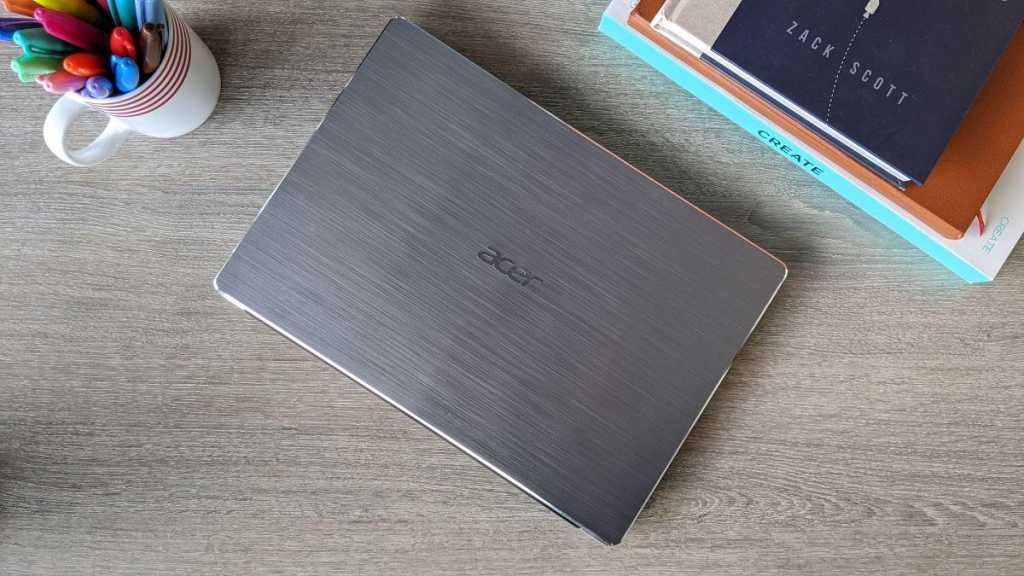 The Acer Swift 3 is an excellent choice for those after an all-rounder laptop at a reasonable price. It combines nice design and good build quality with a range of features and adequate performance.  Some rivals are better in some areas, but the Swift 3 has its pros so it depends what’s more important to you.

Acer has established itself as a force in the laptop world, offering great value for money. The latest version of the Swift 3 is no exception with both AMD and Intel models to choose from.

The same is true of the Lenovo IdeaPad S340, one of the Swift 3’s key rivals in the budget laptop market.

Very few laptops come in just one model and therefore once price. The Swift 3 (SF-314 by model number) is no exception and can be found in a number of different configurations.

Making things a little more complex is the fact that you can choose AMD or Intel processors.

We’ve tested the cheapest AMD model here which is powered by a Ryzen 3 and costs £499 from Currys PC World. There are also Ryzen 5 and Ryzen 7 models should you want more power at your fingertips.

Over on the Intel side of the fence, things start at £449 if you’re happy with a Pentium processor and there are also 10th-gen Core i3, Core i5 and Core i7 options to choose from going all the way up to £1,099. Either way, these laptops run Windows 10.

In the US, it’s available from $499 as this comes with an AMD Ryzen 5 – view the other models at Acer.

We’re focusing on the AMD Ryzen 3 model here, which must compete with rivals such as the Lenovo IdeaPad S340 and HP 250 G7. Check out all the best budget laptops in our chart.

For a cheap laptop, the Swift 3 is a rather attractive product. You wouldn’t guess the price tag if you picked it up and had play.

The main thing making it look more premium is the brushed metal on the lid and surrounding the keyboard. Bevelled edges give it a little extra flash of style. Granted, other sections are plastic but these are areas you will rarely see.

A small lip on the lid helps you open the laptop up, although the hinges are stiff enough that you’ll need to use two hands.

You’ll notice what looks like a small black button below the keyboard on its own. This is actually a fingerprint scanner which helps you log in securely.

The Swift 3 is a middling 1.5kg so it’s not crazily light, but it’s also not too heavy either.

We have mixed feelings about the keyboard. On the one hand it’s pretty decent, sitting slightly sunken so the keys are level with the surrounding metal and they offer a nicely crisp action with a reasonable amount of travel.

There’s also a backlight, although it’s either on or off rather than having different levels of brightness.

However, as with so many laptop keyboards, there are some really tiny keys that are tricky to use. Namely the arrow keys which are all half size because up and down take up the space of one normal key, and the page up and down keys are sandwiched above left and right. The left Shift key is also smaller than usual to allow room for backslash.

It’s understandable that the top row of function keys is a little smaller, but we feel that the main keys could all be a little bigger as it’s too easy to hit the gap between letters and numbers while typing.

We’ve not run into any issues with the trackpad. It’s a good size and responds well to input, whether it’s a single digit or multiple-finger gestures.

The display on a budget laptop is often the biggest downfall, but Acer hasn’t gone for the cheapest panel it can find for the Swift 3.

It’s Full HD (1080p) like most nowadays but importantly using IPS technology. This ensures viewing angles are good so when you tip the screen or look at it from the side, you can actually still see what’s on it.

The slight downside is that it doesn’t have a huge amount of brightness available. We were still able to write this review using the laptop on a train with bright sunlight streaming in the window, but it wasn’t particularly easy.

During the day, we expect you’ll need the brightness set to maximum. We measured it peaking at just 183cd/m2.

The confusing world of laptop models isn’t going away any time soon and as such, the Swift 3 is available in a wide range of models (or SKUs).

We’ve tested the AMD Ryzen 3-3200U model, which comes with 4GB of RAM. That matches the IdeaPad S340 exactly.

You can also get the Swift 3 with various Intel processors, too, including Pentium, Core i3, Core i5 and Core i7.

We’ve found performance to be good during use, as long as you keep things at the basic end of the spectrum. This is a budget laptop after all, so you’re going to need to pay more if you want to do things like video editing smoothly.

If you’re less fussed about things like design, the Lenovo V330 and Acer’s own Aspire 3 have more power at similar prices.

Inside is a healthy 256GB of storage and the fingerprint scanner we mentioned earlier works well most of the time to log in quickly.

The Swift 3 also has a nice range of ports. Something that budget laptops do better than premium models as they’re not trying to be thin and flashy. You still get the modern USB-C, but alongside three full-size USB ports and HDMI.

A headphone jack and full-size SD card reader round things out nicely – plus you don’t need to take up the USB-C port for power as the Swift 3 has a dedicated power input of the old barrel style.

Acer claims the Swift 3 will last up to 10 hours and in our video loop test that all laptops go through (we loop a 720p video at 120cd/m2 screen brightness), the result wasn’t far off.

At nine hours and 33 minutes, that’s closer to the advertised length than many laptops get. While it’s a good result, there are rivals that last longer.

The Lenovo IdeaPad S340 we reviewed recently managed a whopping 14 hours and 26 minutes.

Also, in actual use, the Swift 3 struggled to get through a day of work – and we’re only talking a bit of web browsing and word processing. We only got around 5-6 hours before the battery was low enough that we plugged into the mains.

There’s a lot to like about the Swift 3, especially considering the model we tested comes in at under £500. It’s well-made and stylish, both of which are rare in the budget laptop world.

For once, advertising this as an all-rounder is pretty accurate. You get a nice balance of style, specs, features and performance making it a great choice for mixed usage.

Bear in mind we’ve tested the AMD Ryzen 3 model here but there are plenty more powerful models available too, including Intel processors.

One of the highlights is the IPS screen, which is an unusual feature for a budget laptop. As is the fingerprint scanner for quick and secure log in.

However, the Lenovo IdeaPad S340 is worth consideration if battery life is more important and the V300 or Aspire 3 have better performance if design is lower down your priority list.