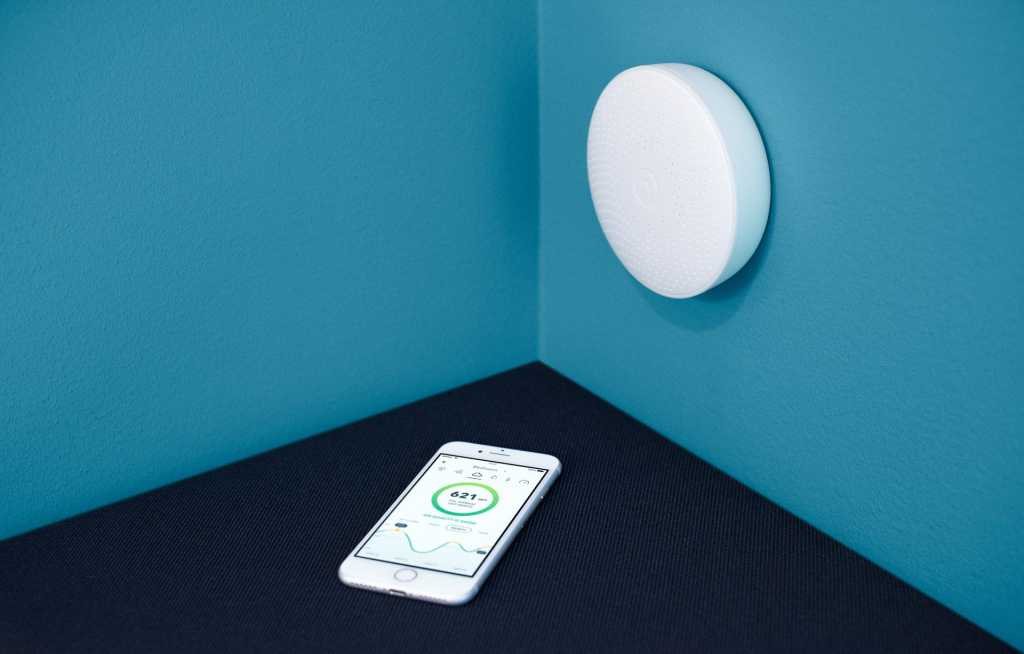 If you live in an area with a high radon risk, you should get a radon monitor and this is what Airthings does best. As a general air quality monitor, however, you’ll have to bear in mind that it doesn’t measure particulate matter.

The design of the device can best be described as no-frills. It’s a chunky white disc, approximately 12cm in diameter. Most of the time, the Airthings Plus looks a like a generic smoke detector – that is, until you wave a hand over it, when a coloured ring illuminates in green, yellow or red to give you a top-level indicator of air quality.

Still, you’re probably not buying an air quality monitor for its aesthetic appeal.

The illuminated ring is also of limited usefulness, as, if the air quality isn’t perfect, it doesn’t tell you at a glance which of the monitored air quality factors is affected.

After being met with a green ring each time I waved my hand over it, I was at one point startled to see a red ring. But in order to find out whether the problem was CO2, VOCs, temperature, humidity or air pressure, I had to get my phone and scrabble around to open up the app and check. (The issue turned out to be a drop in humidity below the recommended 30% – to 24%.) 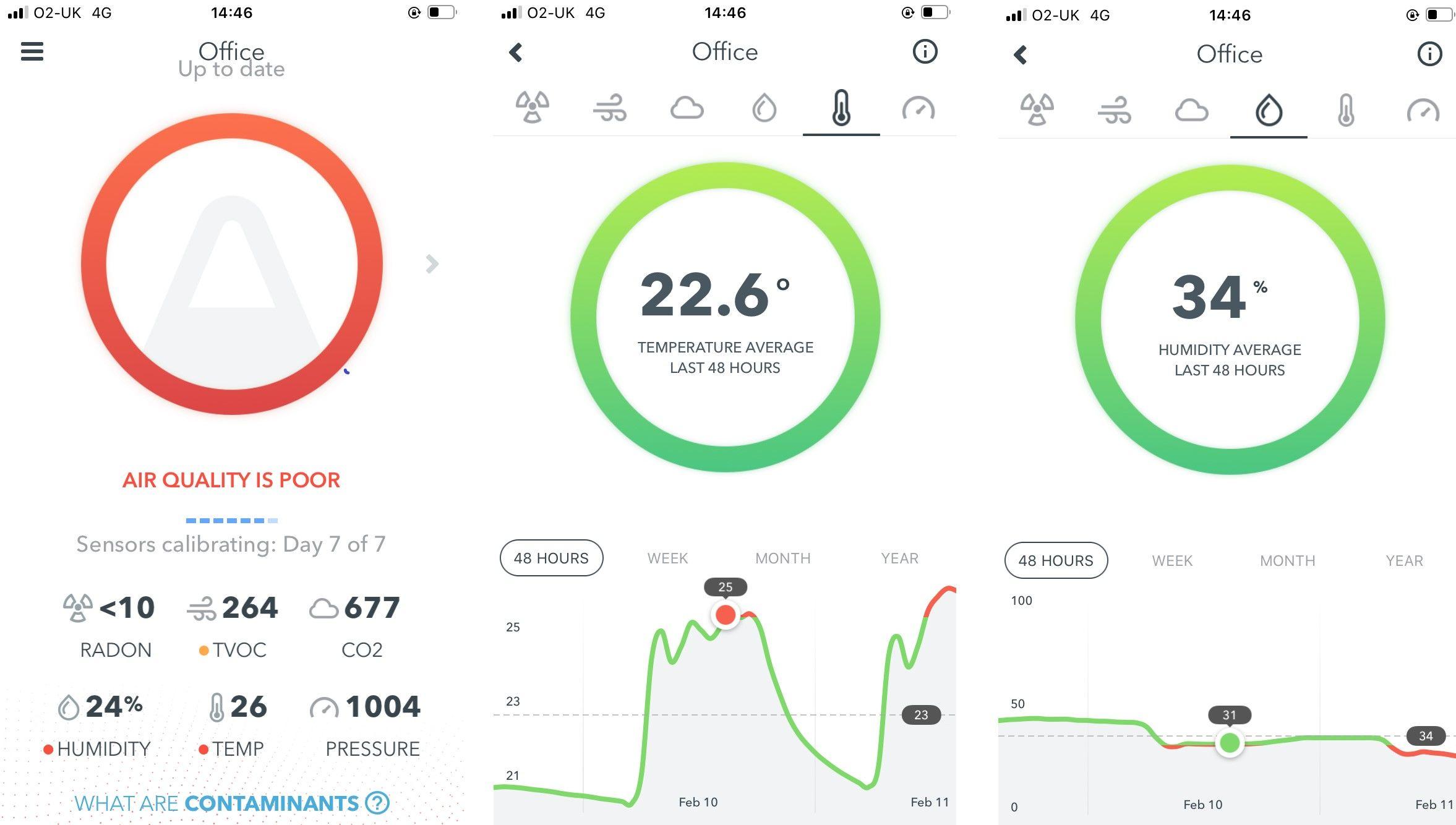 Do you need a radon monitor? If you live in a higher-risk area, it would be a sensible purchase. Radon gas is one of the leading causes of lung cancer. Radon tends to rise up and enter buildings from rocks and soil and can reach dangerous concentrations in basements and other low-lying areas. UK residents can check this radon map to get a sense of their risk.

The Wave Plus measures not only radon – and has a radon alarm to let you know instantly of any danger – but TVOCs (total volatile organic compounds), carbon dioxide, humidity, temperature and pressure.

VOCs are gases found in the air. They’re emitted by burning fuel, food or candles, or by products as they’re used. There are a number of things in your home that may produce VOCs. This includes cleaners and disinfectants (and if you use cleaning sprays, there will be more VOCs floating around in your air), air fresheners, paint, solvents, dry-cleaned clothing, cosmetics and more.

In the short term, some VOCs can cause respiratory problems, headaches, tiredness, nausea and skin irritation. Longer-term, they may affect the health of your heart and lungs, as well as causing damage to your immune system.

We tested the VOC monitor by spraying an aerosol near the sensor and, as you can see in the screenshot below, the TVOC measure spiked shortly afterwards. (Incidentally, this view is from the desktop dashboard and it’s the only way to get a granular look at the data. It’s not available on the app.)

Carbon dioxide is produced by fuel burning, so improperly ventilated open fires, furnaces, gas ranges and other gas appliances can increase the carbon dioxide levels in your home.

Overcrowded rooms can also have a higher concentration of carbon dioxide (which perhaps explains why you feel exhausted and headachey during a big family get-together. No, really, it does. Well, anyway, it’s a good excuse to leave).

While there is not much of an outdoor humidity issue in the UK, indoor humidity is important to respiratory health. Too low and you can suffer from an irritated nose and throat and an increased risk of viral infection. Too high and you will encourage the growth of mould and bacteria in your home.

While the TVOC, CO2 and humidity sensors are of benefit, we were less convinced with the air pressure sensor. The help section on the Airthings site says that “drastic changes in air pressure can cause headaches/ migraines”. But unless you’re in a building with a bizarre ventilation system that’s affecting indoor air pressure and which you can shut down, there’s not much you can do about it.

That’s one of the flaws of the Wave Plus. While the monitoring creates data, it would be useful to have some guidance about what to do in the event of a red air quality reading. Some rival monitors feature tips to help you improve your home air quality. The Wave Plus doesn’t offer advice.

The Wave Plus also doesn’t measure the particulate matter in your air, which would be a nice feature and, arguably, more useful than an air pressure sensor. Particulate matter can affect your heart, lungs and immune system.

For part of the testing period, I placed the Wave Plus in the kitchen and found that TVOCs spiked while cooking a Sunday roast and that CO2 rose afterwards. As I was using a gas cooker, which releases fine particles into the air, it would have been very interesting to see what was happening with the particulate matter content as well. 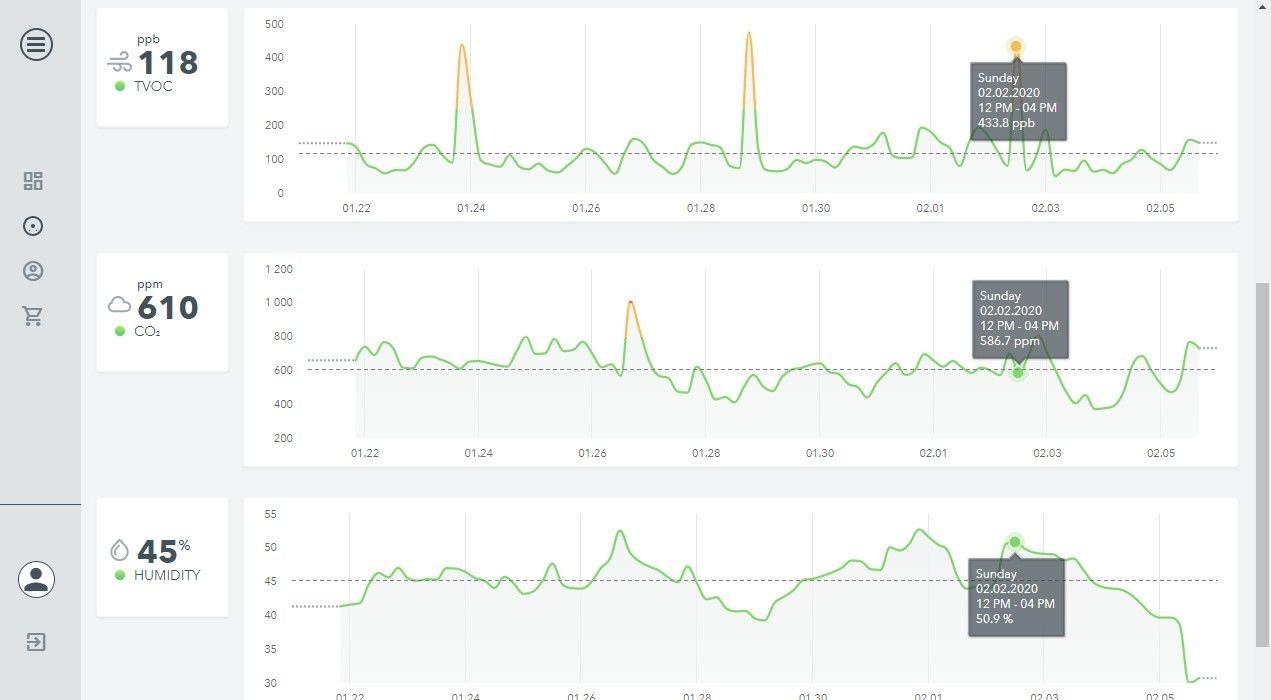 The app is free to download and simple to use. Pairing it to the device and getting set up was swift and straightforward. Once you’ve chosen a room and named it on the app, find a home for the device – you can mount it or sit it on a shelf – and the Wave Plus will begin a week-long calibration process.

During this period, you’ll still get data, but the results may not be entirely accurate. We found that the data collected during calibration was much the same as that displayed once it was fully set up.

The app is nicely laid out and easy to navigate. Our one reservation is that if you spot something interesting in a trend line and want to investigate further, you’ll need to move to the desktop dashboard to identify the exact times of spikes and troughs. This isn’t ideal and represents an issue with the overall display. You need to move from device to app to desktop to really understand the data.

Following is a screenshot that demonstrates the closest look you can get at the data on the app and, as you can see, it’s quite hard to figure out when air quality events took place. 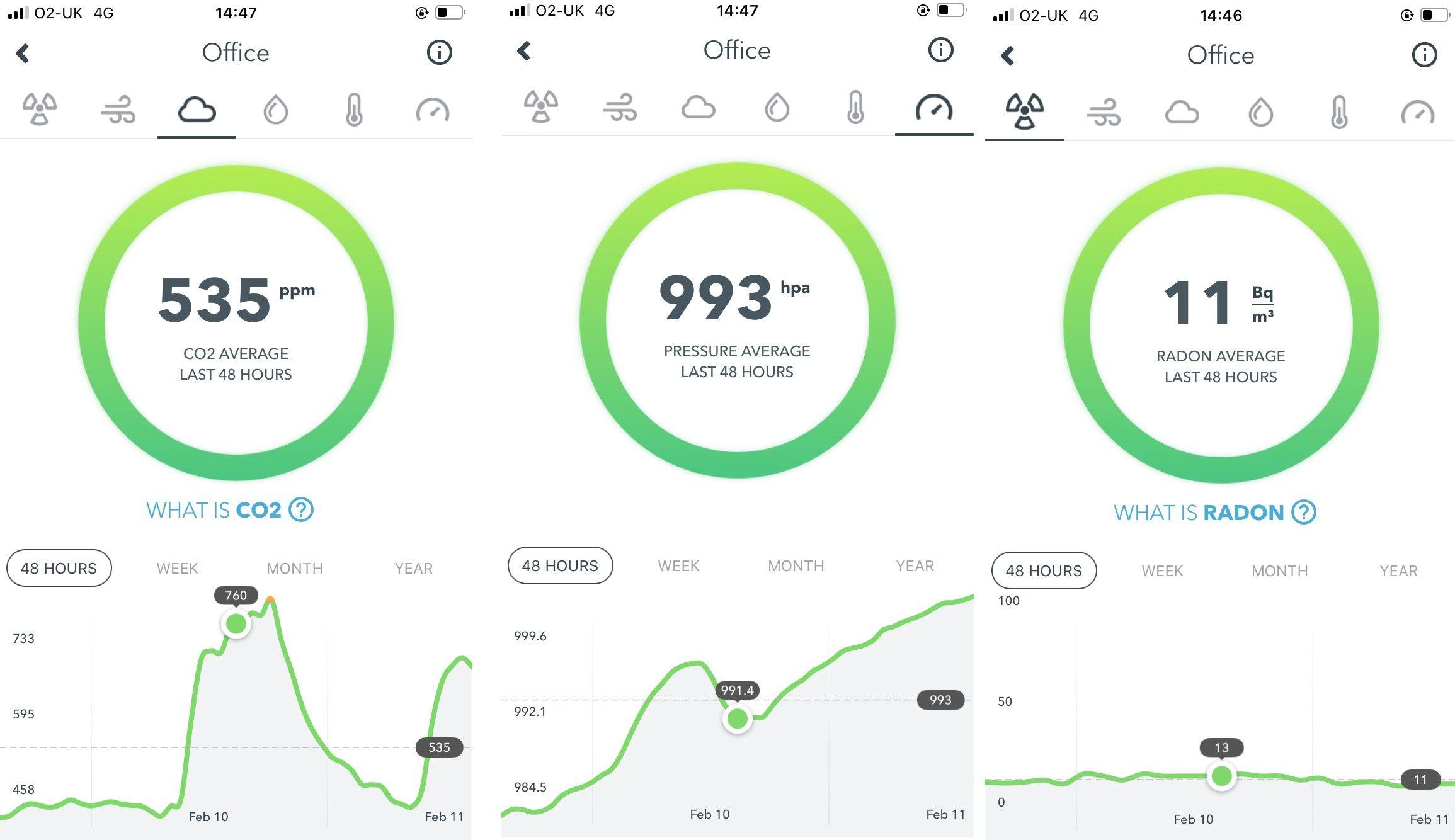 The Wave Plus is IFTTT compatible, which means you can get air quality notifications and sync it to other devices such as Hue lights, for an expanded display, or to a smart fan to come on if the temperature rises.

If you need a radon monitor, we’d recommend an Airthings device. However, if you only want an air quality monitor, you may want to consider buying one that measures particulate matter as well.

The air quality factors that the Wave Plus monitors, it monitors well. However, this is where the service stops. It doesn’t offer alerts or suggestions to improve your air quality. If you want to get the most from the device, you’ll need to use it in conjunction with IFTTT.

There’s also a display issue. The light ring on the device is not particularly helpful, as the information it provides is so limited. The app gives you more information but if you really want to know how your routines and habits are affecting your air quality at home, you’ll have to move beyond the app and use the desktop dashboard.