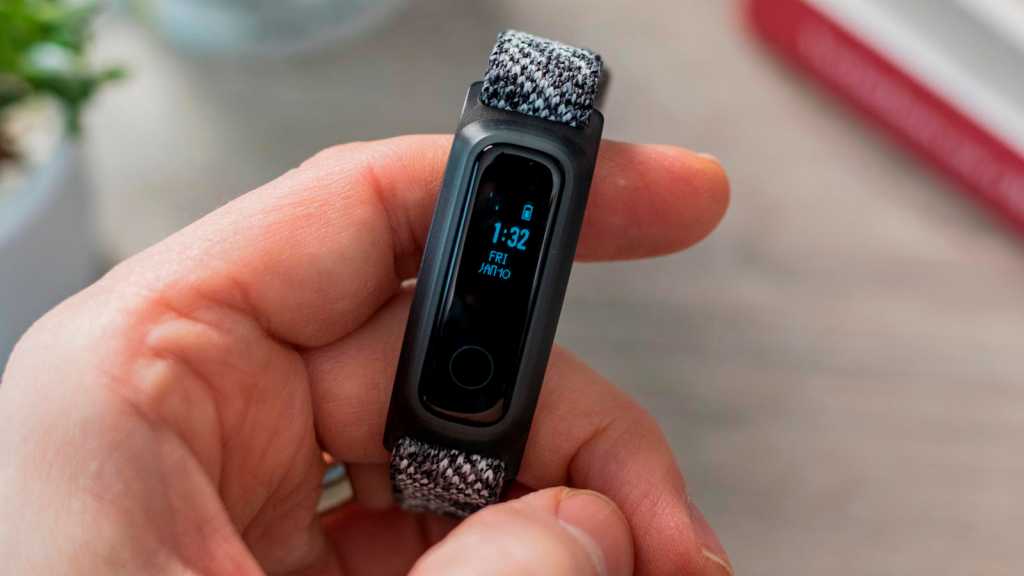 The Honor Band 5 is a compelling alternative to the regular model, offering distinctive features that will appeal to many people. Its major selling point is the secondary footwear mode, which offers a superb range of stats when on the court or travelling by foot. However, there are just a few too many compromises to recommend this to general users, particularly when you can get the standard Band 5 for a few pounds extra.

Hot on the heels of September’s regular model, this version is among the most affordable fitness trackers you can buy. There are a few notable differences though, with an emphasis on specific sports and some subtle changes to the user experience.

But is it worth buying if you’re in the market for a budget fitness tracker, or should you spend just a little extra to get the regular Band 5?

You can buy the Honor Band 5 Sport (also known as the Basketball Version) for £19.99/ US$27.99 from Amazon .It’s also available from  GearBest, eBay and AliExpress for a similar price.

The official Honor UK site doesn’t list the Band 5 Sport, which might explain why our review sample was imported from China.

Nonetheless, this makes it one of the cheapest fitness trackers you can buy, undercutting the regular model by around £10.

Its price is definitely worth taking into consideration when you compare it to the other entries in our best fitness tracker chart, most notably the Xiaomi Mi Band 4 and Huawei Band 2 Pro. 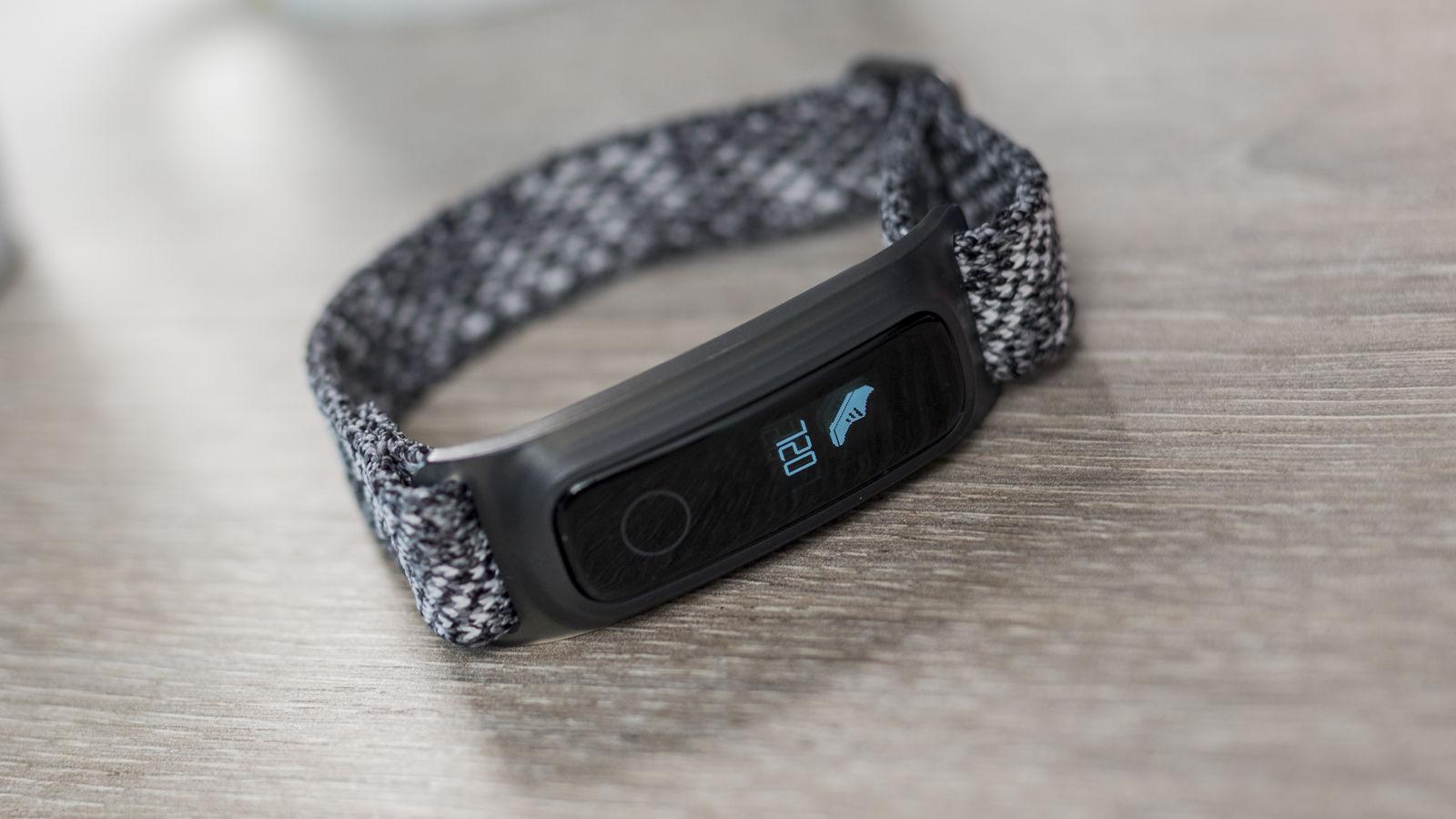 Given the name and form factor, it perhaps goes without saying that the Band 5 Sport focuses on being an activity tracker first and foremost.

The built-in 6-axis Motion Sensor claims to track stats with up to 97% accuracy, especially when attached to your shoelace via the included attachment.

There’s an impressive level of detail on offer here, and without direct skin contact it’s incredibly easy to forget you’re wearing it at all.

With many fitness trackers aiming to minimise intrusion, this alternative attachment is a big draw for the Band 5 Sport. Just make sure you securely attach it to your shoe!

Even after a brisk walk, you are presented with tons of data, everything from foot strike pattern to landing impact. My eversion excursion was apparently too high, putting me at an increased risk of spraining my ankle. Ground contact time was also high, meaning I was covering the ground less efficiently. These sorts of insights are very useful, and particularly impressive at this price point. 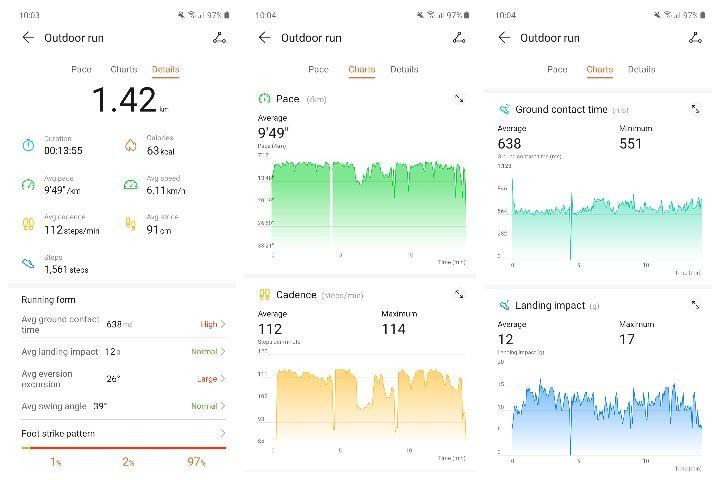 Honor’s claim that the Band 5 Sport can become your virtual running coach don’t seem to be far wide of the mark. We could definitely see our technique improving as a result of the tips offered at the end of a session, be it a walk or run.

It’s a similar story when playing basketball, giving you all the tools you need to improve your skills on the court. In fact, all court games can benefit from the ten types of motion data, so you’ll get similar benefits even if you prefer tennis or badminton.

However, it does lack the same level of coverage across all activities, particularly when compared to more expensive fitness trackers. Running and basketball modes are the only ones that can be manually triggered from the device itself, so Honor is clearly prioritising people who enjoy these activities. 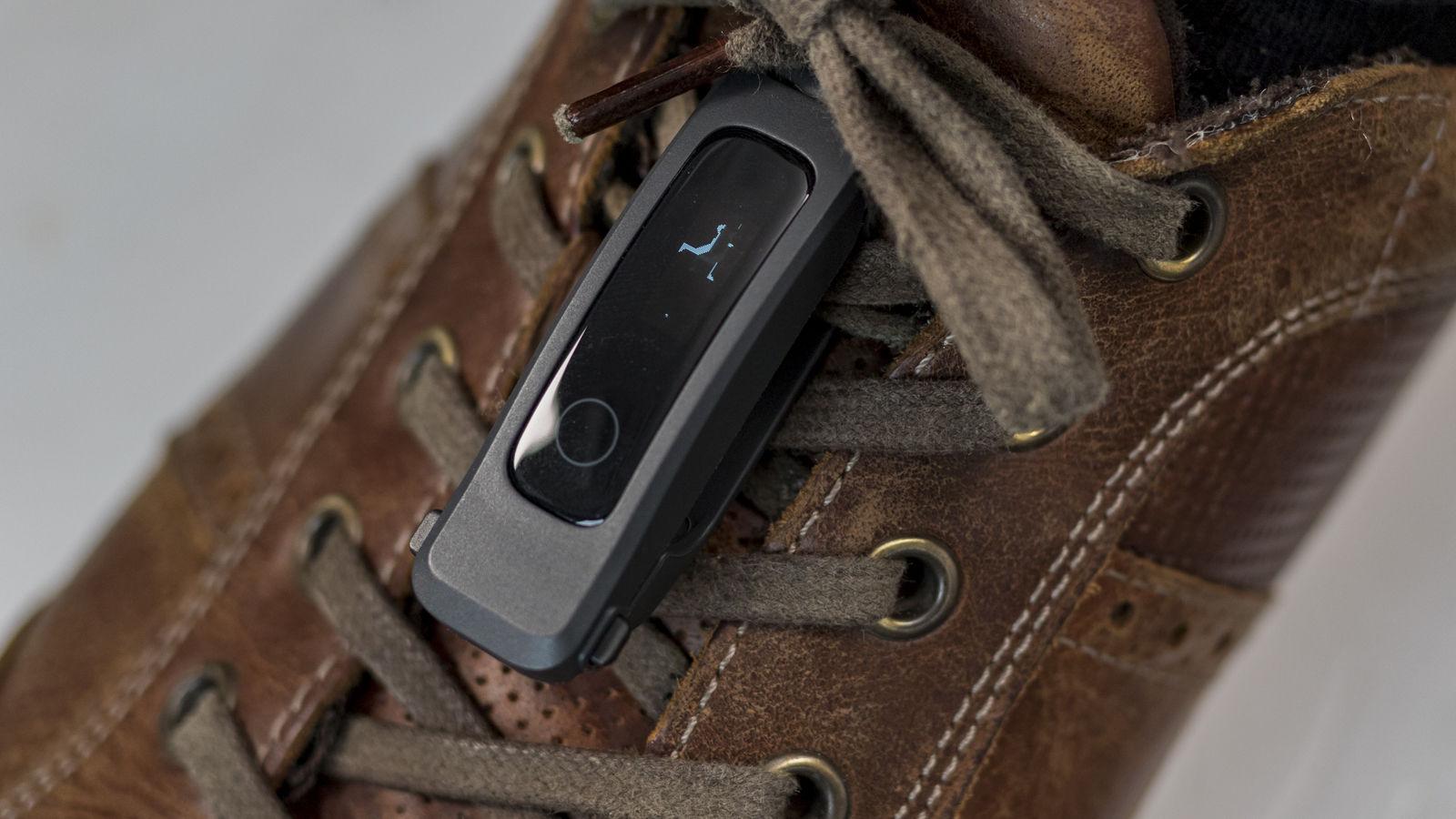 We tried using the Band 5 Sport in the pool, an area where the regular Band 5 was so impressive, but it was sadly lacking. Despite being water resistant up to 50m, being so heavily reliant on a steady Bluetooth connection means it’s practically useless unless you want to risk your phone at the poolside.

Even without this major drawback, swimming would not be the Band 5 Sport’s forté, as it offers little insight beyond distance travelled and calories burned. The strap is also not best suited to getting wet, as it absorbs water and can be left smelling of chlorine for quite a while.

It was a similar story with sleep tracking, despite Honor advertising this as one of the device’s main features. While it was nice to get an overview of how long we were in each stage of sleep and our total shut-eye time, the lack of a heart rate sensor means more in-depth insights were simply not possible.

This is probably the most notable omission in the Band 5 Sport. We could have accepted it not having continuous monitoring like the regular model, but to not even have the option to track your heart rate while exercising is particularly disappointing.

The Band 5 Sport has a pretty typical design for a modern fitness tracker, with an adjustable band wrapped around a small LCD screen. This screen is tiny though, even smaller than the 0.95in panel on the regular model, and as a result is able to display less information at any one time.

As such, there was little benefit to a colour screen, so you’ll have to make do with black and white.

Your only options for interacting with the display are via the capacitive touch button below, or by activating the swipe gestures via the Huawei Health app, which acts as a hub where you can manage and connect your device.

Honor describes the Band 5 Sport as “the world’s most eco-friendly fitness band”, with the strap made almost entirely from recycled water bottles. In a world where tech products are discarded more regularly than ever, it’s refreshing to see a company try to become more environmentally sustainable. 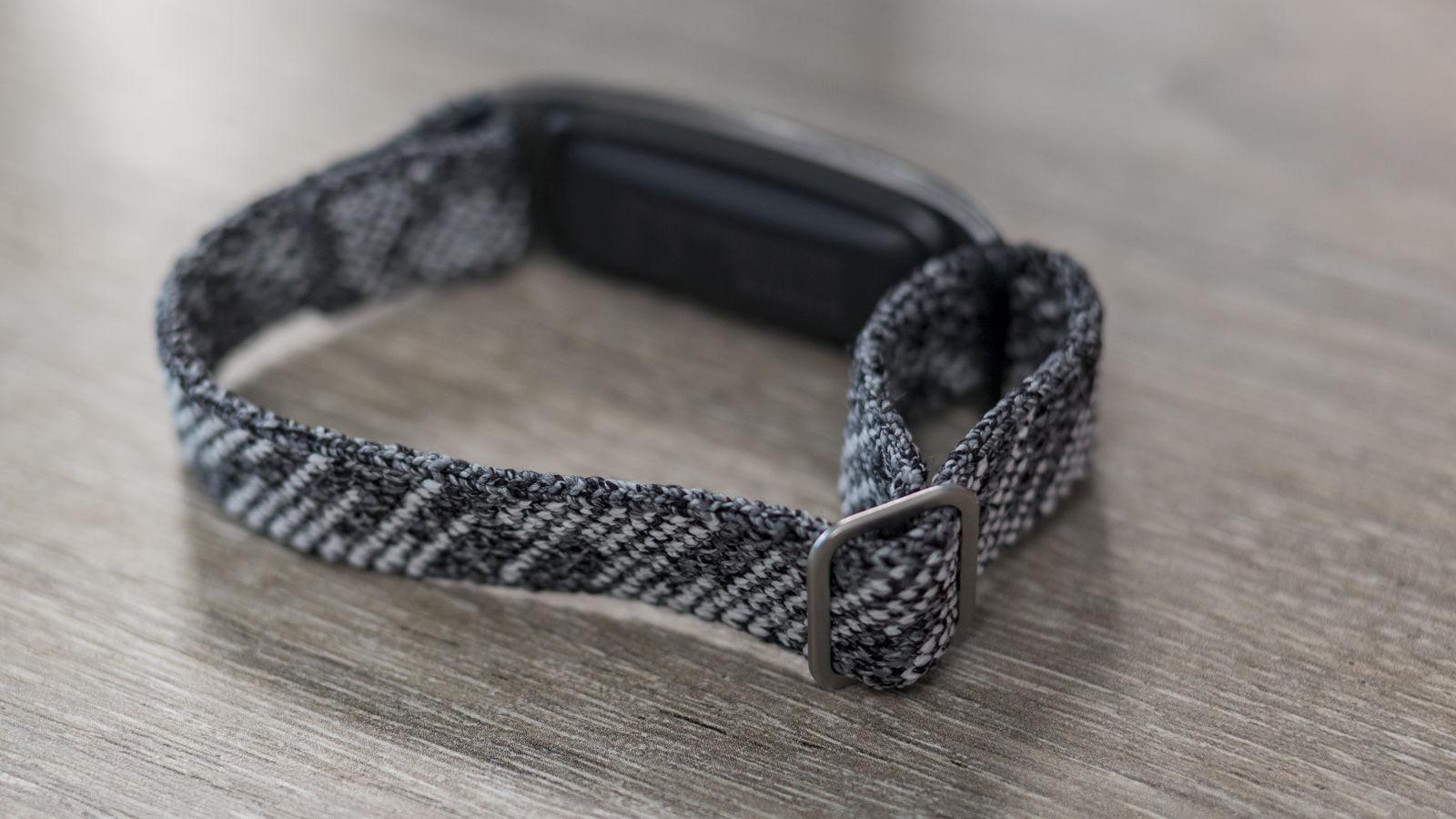 As a result, all the bands have a similar marled pattern, but we particularly liked the Glacier Grey variant we tested. It doesn’t compromise on flexibility though, with an aluminium clasp allowing for easy adjustment of the elasticated strap.

The bands themselves are interchangeable, but not in the way you might expect. A forceful press will see them pop out of the plastic casing, where it can then be transferred to a new strap.

The same process is used when transferring it to the USB charging adapter, and when attaching to your shoelace (more on that later).

As is to be expected with wearables, Honor’s fitness trackers use the company’s own, stripped-back software. This means they are unlikely to be significantly impacted by the Huawei-US ban, unless you rely on a Huawei phone to connect to of course.

There’s not much to report on the software side. It’s fairly intuitive and easy to use, and at this size it makes sense to not have a touch screen. The aforementioned touch sensitive button allows you to cycle through the different settings, but in most cases this provides an overview of each area, rather than allowing you to adjust anything. 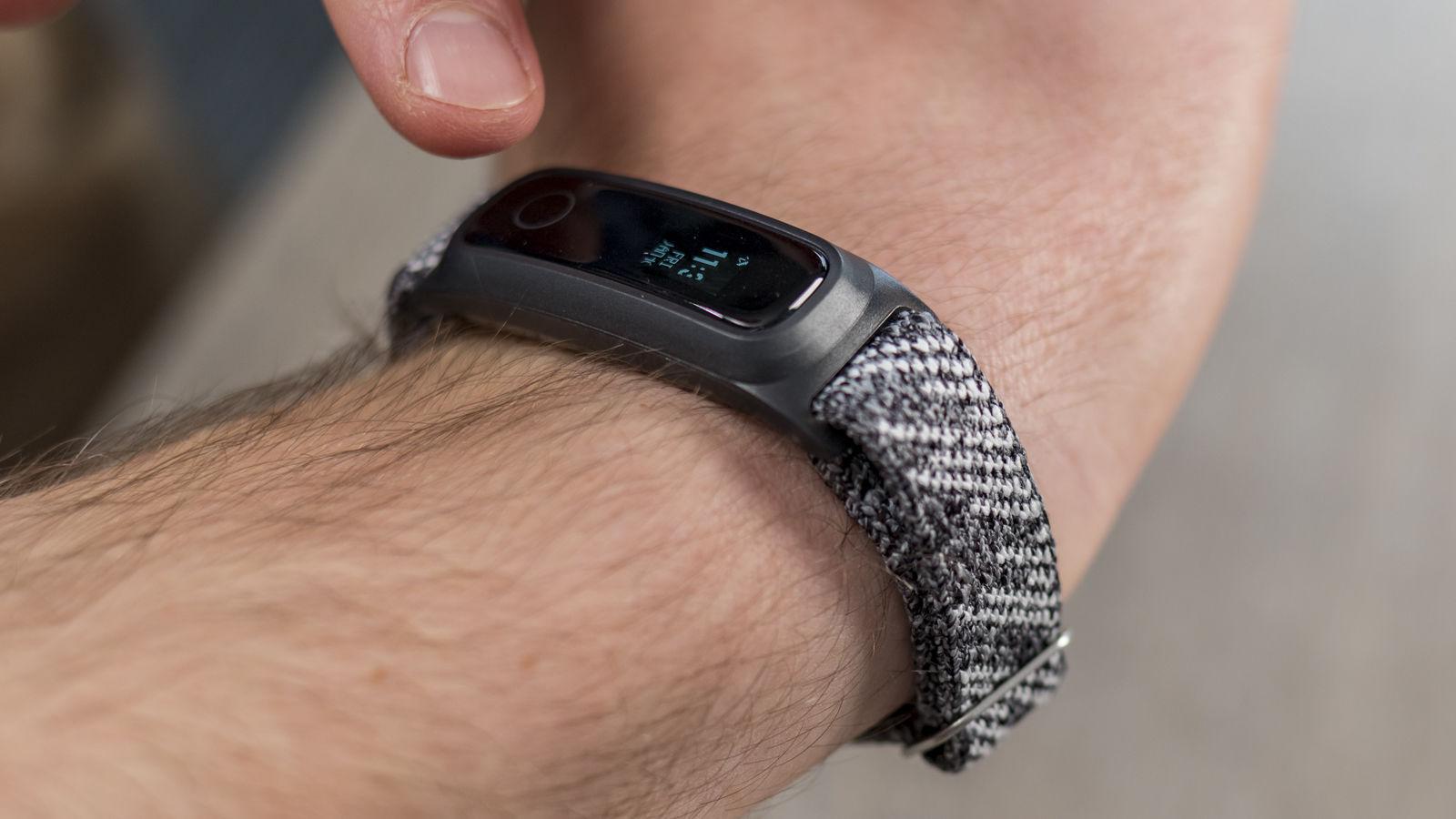 Other features include stand up reminders, notifications for calls and messages and a discrete alarm clock. Like many fitness trackers, the latter aims to wake you up when you are at your lightest stage of sleep, and means you can wake up without disturbing everyone else around you.

It will also notify you where your phone is, albeit with an annoying ‘I’m here!’ repeated until you disable it. Crucially, this setting won’t be available unless you have an active Bluetooth connection.

The Band 5 Sport comes with a claim of up to 14 days of battery life. Honor doesn’t give a specific capacity, but we were pleasantly surprised with how long the device lasted before having to reach for the charger.

This is due in part to the lack of a colour display and fairly stripped back feature set. However, the fact that Bluetooth and Location Services need to be kept on for a steady connection, your phone’s battery life could be the one that suffers.

When the Band 5 Sport does need a top up, you’ll have to pop it into the included USB adapter. Honor doesn’t’ include a power brick, but it’s highly likely that you’ll already have one lying around at home. After about an hour, you’ll be fully charged once again.

Despite being so similarly named to the regular model, the Honor Band 5 Sport more than justifies being a standalone fitness tracker.

Spending around £10 less allows you to wear the device on your wrist or attached to a shoelace, with the latter offering in-depth statistics with next to no intrusion.

Unfortunately, most of these insights are reserved for the handful of activities that support the foot mode, so it lacks the all-round ability of the regular Band 5.

You’re making compromises in a number of other areas, including the low quality display and lack of full sleep tracking.

We can’t blame Honor for the slightly impractical strap material though, as this is made almost entirely from recycled plastic bottles.