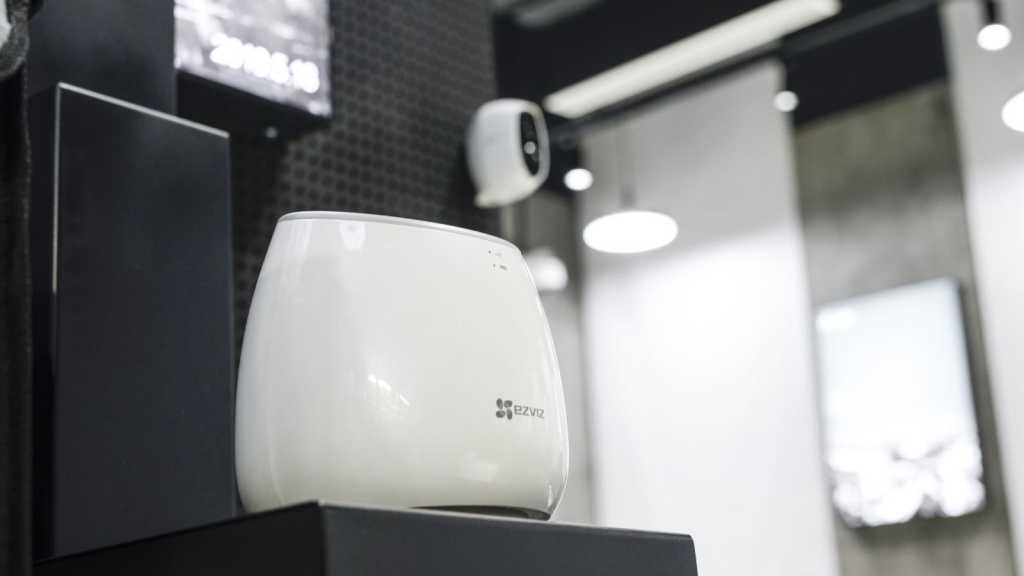 For a starter kit, the EZVIZ is surprisingly expensive. The hub supports up to six cameras, but the only real reason for its existence is to offer 4G backup and power if your broadband goes down or there’s a power cut. While there’s also a siren in the hub, you can’t extend its use with other home alarm sensors. Cloud storage is expensive as well – all of which makes the kit hard to recommend.

Anyone looking for a home security set-up at the moment is spoiled for choice and the cost of entry is low. For £19.99, you can buy an indoor smart security camera – the Neos Smart Cam, which we reviewed and liked a lot.

That means you’d need a really good reason to spend upwards of £329 (the best available offer right now) on this home security kit, which features a hub and a single camera.

EZVIZ, a subdivision of Chinese security giant Hikvision, aims to provide you with that reason: but does it succeed?

You can get the EZVIZ hub and battery cam kit from a number of retailers. Amazon is selling it for £329, as is AO.com. Very is asking the full RPP of £379.99, while Robert Dyas is currently charging £399.99, along with BT.

This range of prices suggests that these retailers aren’t exactly sure what people will pay for the EZVIZ kit yet, so if you really want it, be prepared to shop around. Or better still, give it some time.

The EZVIZ is marketed as a starter set for home security. You can connect up to six C3A cameras to the hub and use them both indoors and out. It’s important to note that other types of EZVIZ cameras and devices such as door sensors don’t work with this hub, so you can’t use this kit to expand an existing EZVIZ ecosystem.

The hub and camera are both attractive items, with a rounded design and shiny white finish. The hub is a bit larger than you might expect – approximately 13cm in diameter and 14cm high. It’s by no means an inconspicuous item and if your decor isn’t modern, it won’t blend in.

The kit was really well packaged, with quick start guides and all the necessary accessories (a mount and charging unit for the camera; a charging unit and Ethernet cable for the hub). Once the camera’s removable battery was charged and the free app downloaded, the set-up process took just a few minutes.

The only items not provided are microSD cards, which can be used with both the camera and hub as an alternative to paying for a Cloud storage subscription (which EZVIZ also offers). We think the local recording is a nice feature of the kit – it’s not an option on Nest or Ring cameras, so you have to pay for their Cloud storage if you want video to be recorded.

But here’s the kicker – that figure is per camera. That means that if you were to use this hub’s full capacity of six cameras and wanted the 30-day playback option, you’re not going to get much change from £600 for a year’s service. (By comparison, in the UK,  Ring offers unlimited devices with a 30-day video history for £80 per annum.)

You should also bear in mind that because it’s battery powered, the C3A does not support continuous recording. So for this extravagant sum, you will only get to watch recaps of motion-activated events.

The app is functional but not as intuitive as others of its kind. Saved videos, for example, appear in a folder called ‘My Album’ on your user profile page. Meanwhile, video alerts (taken after a camera is activated) appear on your messages page. To find your live feed and save a clip, you click on a video still from the camera feed on your homepage, which takes you through to a second, camera-specific page.

Wait – so where was the video clip I just saw?

It’s likely that this layout would make more sense if you had six camera feeds set up, but in either case, it’s not straightforward to navigate between different pieces of footage.

We only had one issue while using the app, which occurred while trying to share access to the camera – a feature the app allows. The second user was only able to get partial access. They received the alerts but were unable to view the attached videos, or the live camera feed. When this was attempted, they got a notice that the camera was offline.

It’s possible that this issue was related to the fact that the main account was on the iPhone app and the secondary was on Android but here, we’re really just speculating.

The hub has some good features for the security-conscious. It’s got 4G LTE capability and can function as a router (it also has a micro-SIM card slot). If power and/or broadband connections go down, for example, in the event of a power cut, the hub will continue to work for over an hour.

Also in the event of a power cut, you can use the hub as a hotspot to connect two other devices, such as a phone and a laptop.

These are good features on paper but as wireless cameras will continue to function in the event of a power cut, the hub (which is not strictly necessary for a security set-up) is really only protecting itself.

The hub also has a 100 decibel siren that can be set to sound when a camera is activated. That’s painfully loud. For reference, exposure to a noise this loud for more than 15 minutes could result in permanent hearing loss. As a means of alerting you to the fact that a camera has detected someone, it’s overkill.

As a deterrent to trespassers, it’s not ideal either. If you have cameras outside, the siren going off indoors isn’t going to do much to deter someone wandering around your garden. Nor will it be loud enough to alert neighbours or passers-by to an intruder. What it will do is deafen any people or pets stuck indoors.

According to the manufacturer, the hub can be up to 10 metres (33ft) from the camera. We were unable to test it to its limit but what we can tell you is that there was no loss of function from 6 metres (20ft).

The C3A camera is a sleek little device. It’s weatherproof (it’s IP65 rated, so it should withstand a jet of water from any direction for up to 15 minutes) and battery-powered and measures approximately 5cm by 10cm.

Most security camera brands (including Ring) use a different type of motion detection system based on whether or not the camera is battery-powered.

If it is, then power conservation is key and the system will use the more basic PIR (passive infrared) detection. PIR only allows customisation based on the level of heat detection, so it may allow you to choose a low, medium or high setting. On the positive side, PIR sensors can cut down on false positives such as trees swaying in the wind or moths flying by the camera.

But the best indoor cameras don’t use PIR. They use software-based motion detection, which allows for a much greater level of customisation. You can usually choose areas within the camera’s field of vision to focus on, while cutting out others.

More advanced detection options – such as pan and tilt cameras or facial recognition software, available on devices including the Netatmo smart indoor security camera – are also not an option for the C3A, although the Netatmo costs only £27 more.

The other piece of functionality that’s lacking is continuous recording. Once again, this is a feature that’s largely confined to wired cameras. So, if you were hoping to place one of your cameras in your living room and check out a feed of your dog’s movements at the end of the day, this set-up is not for you.

Although you won’t get complete coverage, you can tune in to a camera via the app at any time to observe and, if anything interesting is happening, you can record and save footage.

You’ll also notice something else missing if you use the C3A indoors. You can’t switch off the camera and there’s no privacy mode. This means that if you have a camera set up in your sitting room, it will constantly detect and record motion. If you’re in the room and don’t want to be recorded every time you move, you have few options. You can choose to record without sound, or stop receiving alerts, or simply turn the camera away. Obviously, this is less than ideal.

In terms of specs, the C3A has HD 1080p video quality. Its 126-degree field of view translated to an excellent perspective over an entire, large room during this testing period. The camera also has night vision up to 7.5 m (25 ft), which provided an extremely clear view.

The C3A has a rechargeable 5,500 mAh lithium battery, which should last for several months. Being connected to the hub in fact extends that battery life – EZVIZ claims – to up to nine months. It does this by using radio frequency, not wi-fi, to contact the cameras, as RF uses less battery power.

Finally, the camera has two-way audio. This allows you to accost and hold a conversation with any trespassers, delivery people – or indeed friends – who wander onto your property.

These are very good specs and we do feel that this is a great-quality outdoor camera. It is solid and sealed and really seems as though it could hold up outside for a very long time.

However, the Ring Stick Up Cam (its outdoor battery camera) matches these specs at the much more attractive price point of £89.

You can buy the C3A separately from Amazon from £116.45 in the UK or $79.99 in the US. In the UK, at least, this is still a relatively expensive camera. If you were to take advantage of the hub’s six-camera capacity, the full set-up would set you back £911.25 at current prices. That feels very steep for a camera set-up without advanced options.

Although the camera and hub hardware is high-quality (and the app is functional), you simply don’t get enough for your money. And once you factor in the cost of buying extra cameras to complete your set-up and make an investment in the hub worthwhile, the price is even more prohibitive.

The kit also lacks flexibility, as only C3A cameras can connect to the hub. For this to be a great product, you’d want to be able to use it with a variety of EZVIZ cameras and sensors.

In addition, you’re paying for unnecessary functionality, including a siren that’s more likely to deafen you than an intruder.

The other issue is that the kit is marketed for indoor and outside use but the camera is really best suited to the latter. As an outdoor camera, it’s very good, if expensive, but you’ll be missing out on all of the best features a wired, indoor camera would provide.

The best value way to use the kit is to take advantage of the card recording option, which will then save on the cost of a Cloud subscription. But you still wouldn’t get continuous CCTV-style recording and we don’t think that this makes up for the high cost of the hardware to begin with.