Though not cheap, the A129 Pro Duo is still one of the more affordable 4K dash cams. It does the basics well and offers great video quality, but note that the rear camera is not 4K.

4K dash cams are still few and far between, and when you do spot one, it’s likely to be expensive. Viofo is a relative newcomer to the world of dash cams but has already proven that it has the right recipe.

It sticks to what people want from a dash cam: high quality recording at a decent price. It largely dispenses with unnecessary frills such as lane-departure warnings and other stuff that doesn’t work too well and which dash cam buyers don’t want.

The A129 Pro Duo looks and sounds similar to the A129 Duo, reviewed, but has one key difference: it records in 4K. So is the extra cost worth it? That’s what we’ve been finding out.

(Note that the video above has been compressed, and is not the original 4K quality.)

Whichever version you go for, there are a few things that you won’t find in the box. First is a microSD card, and you’ll want to go for a large-capacity card because the 4K video files take up a lot of space. Even a 128GB card will only store 3.5 hours of footage if you set the front camera to 4K and have the rear camera recording at full HD. 256GB is the maximum capacity supported.

Third, there’s an optional polariser for around the same price as the hardwire kit. This cuts down on reflections from your car’s windscreen and dashboard, and can lead to clearer video with better contrast.

Finally, you can buy – though we haven’t found it on sale at Amazon – a Bluetooth remote button which sticks to your dashboard and locks the video file currently being recorded when you press it. This prevents it being overwritten when the microSD card is full. It’s not really necessary as there’s already a G-sensor in the dash cam which will lock a recording automatically when triggered by an impact.

You’ll find a bunch of alternative choices in our roundup of the best dash cams.

It’s hard to tell the A129 apart from the A129 Pro. They look identical and have identical GPS mounts. They also have the same 2in colour screen, buttons and ports, so it was a one-minute job for us to swap out the A129 Duo already present in our test car and install the A129 Pro in its place: we simply used the power wire and GPS mount from the A129 and plugged the rear camera directly into the side of the A129 Pro.

As mentioned, the rear camera that comes with the A129 Duo is the same model that’s supplied with the A129 Pro Duo, and therefore records at 1920×1080 and offers exactly the same field of view and video quality. 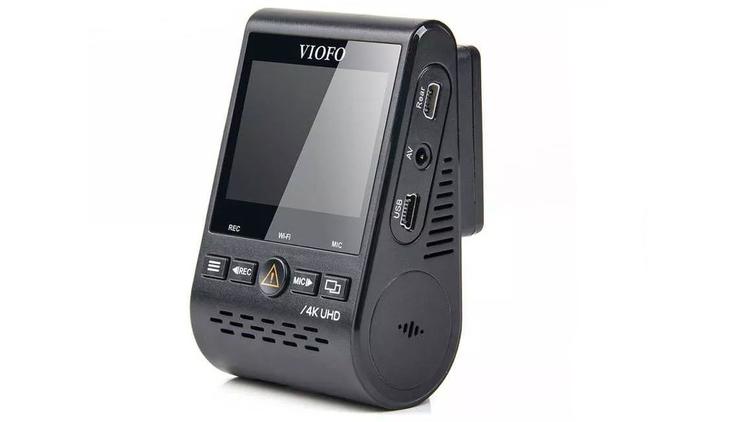 Up front, there’s an 8.29Mp Sony sensor and a different lens which offers a 130° field of view. I’ve seen plenty of people criticise dash cams for having a narrower field of view, but I think it’s actually a benefit since it means cars and other objects directly in front of you appear larger than on lenses with a wider angle of view. And that means details such as registration plates are larger, so are readable when they wouldn’t be on ultra-wide-angle dash cams.

The 2in screen is not a touchscreen, but it’s easy enough to navigate using the buttons – easier, in fact, than some touchscreen dash cams.

There are rather a lot of settings, but the main ones you’ll probably want to deal with when first setting up the A129 Pro are the resolution and bitrate.

For the former, you’re somewhat limited if you’ve bought the version including the rear camera. That’s because the front camera can only be set to record at 30fps when the rear cam is connected, and it makes no sense to record at a lower resolution than 4K. (Remember the rear camera tops out at 1080p).

In terms of bitrate, you have four choices: Low, Medium, High and Maximum. At the latter setting, which is 60Mb/sec, each minute of 4K video takes up about 450MB on the microSD card (the rear is about 120MB). So that’s a total of 570MB per minute.

You can also enable WDR to improve clarity at night, and choose exactly what information is stamped onto the video: date, gps coordinates, speed, car registration and custom text.

It’s worth noting that there is no battery in this dash cam. It uses a super-capacitor instead and also has a built-in overheating protection system, so should be reliable even when baking in the sun in a car park.

There are the same three parking modes available on the A129 Duo: motion detection, low bitrate recording or timelapse (you pick between 1 and 10 frames per second).

For the former, it works on a buffer so it’s able to record 15 seconds before the impact and 30 seconds afterwards, which should ensure you see what happened (assuming it happened within the view of the front or rear cameras, of course).

To use any of these, you’ll need to have the camera hardwired rather than using the bundled cigarette socket adapter. (You could instead use a USB power bank while parked, but the advantage of the hard wire kit is that it will automatically switch to your chosen parking mode when you switch off the ignition – much more convenient). The hardwire kit has a slider so you can choose at what battery voltage it shuts down the dash cam to avoid a flat car battery.

Like almost all dash cam apps, Viofo’s is clunky and basic. It’s possible to view the live feed from the dash cam (which might be useful for adjusting the angle of the lens) and adjust the settings more easily from your phone instead of using the buttons on the camera itself.

The main use, though, is to view and download recorded video. Fortunately, this part works well. I selected 5GHz under the Wi-Fi menu before holding down the picture-in-picture button for a second or two to switch Wi-Fi on. Then, after picking the Viofo network and entering the default 12345678 passsword, it’s possible to connect to the camera and tap the bottom-left icon to see the list of files.

These are divided into days, but the front and rear clips are shown separately, not combined. The fast connection speed afforded by 5GHz Wi-Fi means you can watch clips as if they were already on your phone, and they can be quickly downloaded to your phone for editing and sharing. 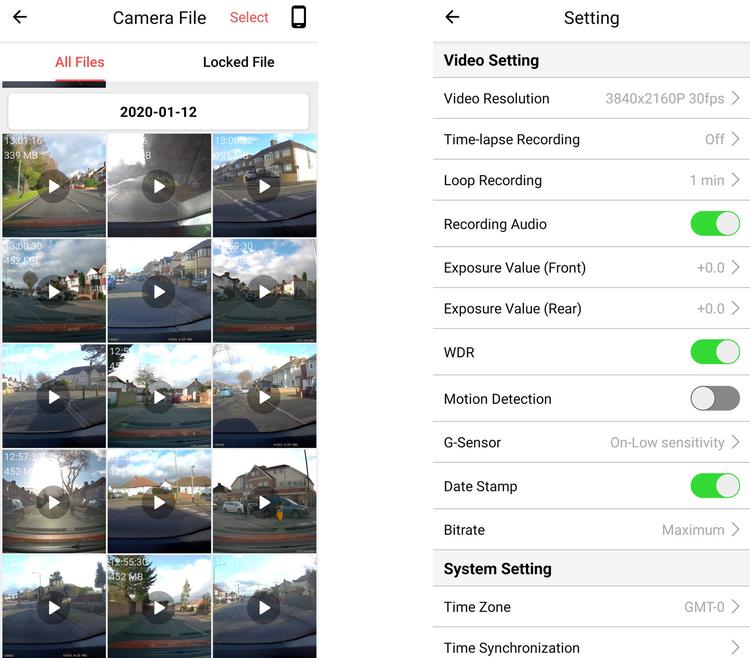 At around 8MB/sec it takes about 45 seconds to download a minute of 4K video, and 12 seconds for a clip from the rear camera. This is a real boon as it means that, for once, here we have a dash cam that doesn’t have to be removed from the car and taken to your PC or laptop to offload footage.

Having been disappointed with the footage from Nextbase’s 612GW, I was more impressed with the 4K video from the A129 Pro. Even without the polariser, images are crisp and detailed. It’s possible to see registration plates of other cars on the road (both parked and driving) and to read signs and other text.

Detail levels are perhaps not quite as amazing as you might expect, but this frame grab shows that plates are mostly readable even when cars are reasonably far away, or parked to the side. 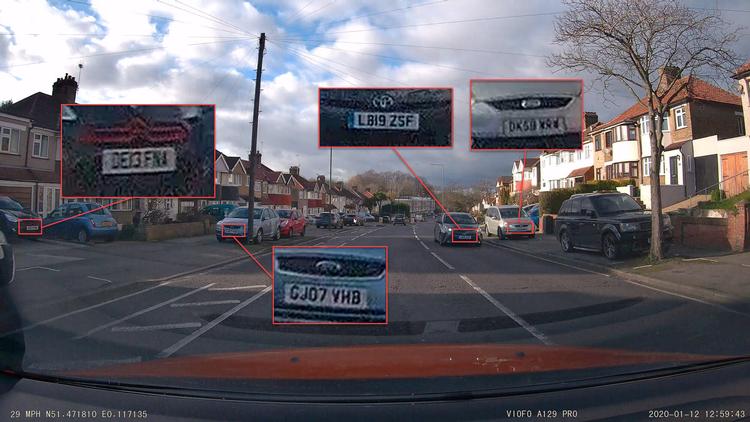 At night, there’s a good amount of detail in shadows with WDR enabled, but the same problem that all dash cams suffer from: overall quality is vastly reduced. 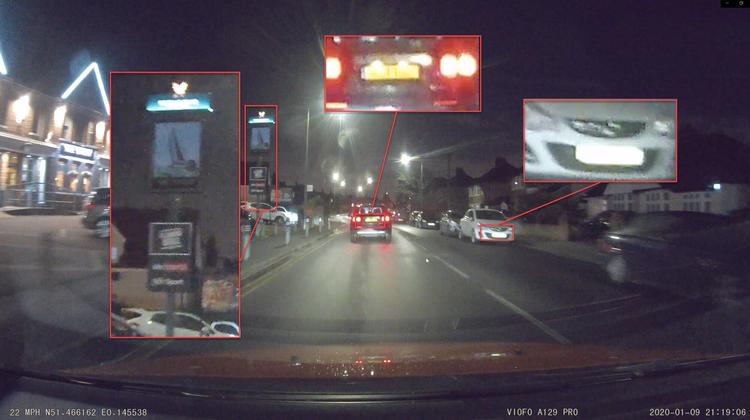 Plus, because number plates are reflective, it’s impossible to read them when your car’s headlights are shining on them. Reviewing footage, almost every registration plate was illegible at night unless the car in front stopped at a well-lit junction, whereupon its registration was nice and clear as soon as I had pulled up behind it.

Quality from the rear camera is – as mentioned – the same as from the A129 Duo. It’s better than most rear cameras, and delivers pretty sharp footage. Again, quality drops at night considerably, and there’s certainly not the level of shadow detail available from the 4K front camera. 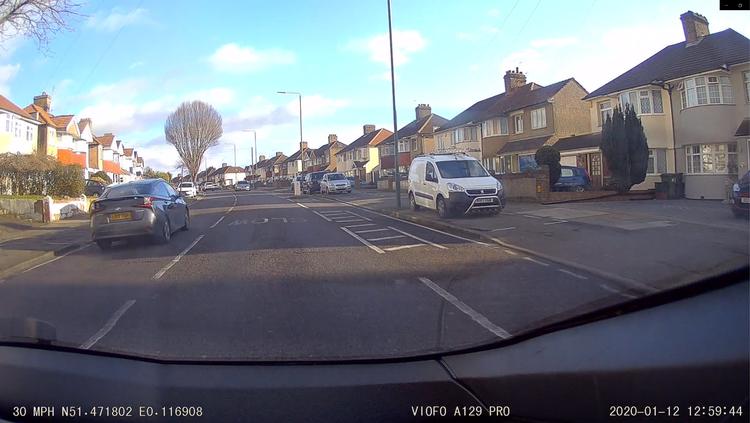 The A129 Pro Duo is one of the cheapest dual-channel dash cams around, so even though it costs a lot more than the A129 Duo, it’s worth it if you really want the extra detail available with 4K recording.

There’s also the dual-band Wi-Fi which makes it a lot faster to download clips to your phone. If we’re being critical, the app could be slicker, but fundamentally the A129 Pro Duo records excellent-quality video for the price.