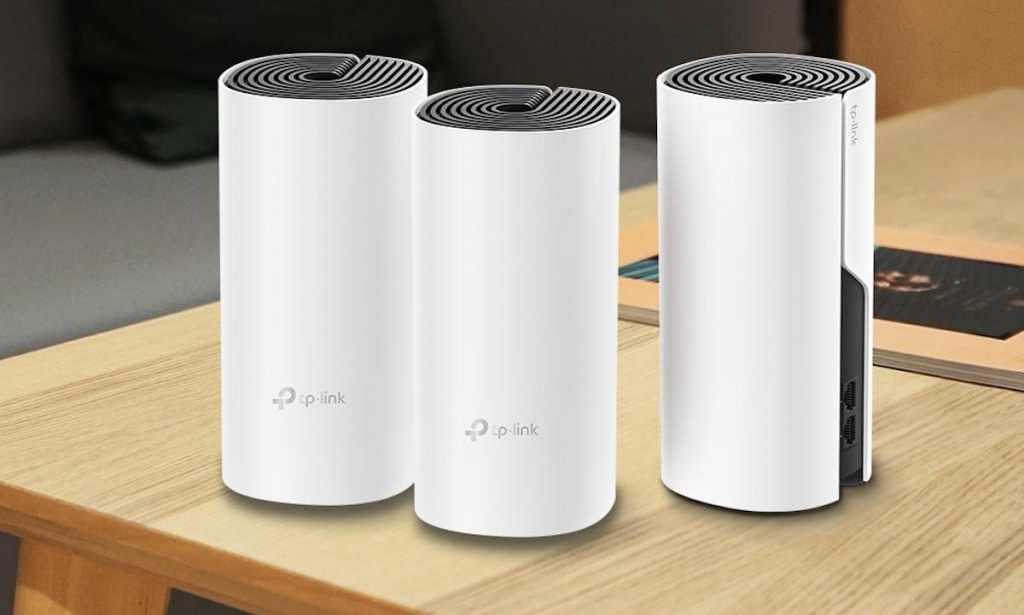 Mesh Wi-Fi systems are all the rage at the moment, offering a user-friendly way to extend and improve Wi-Fi performance across the home without having to use annoying range extenders. But while Mesh Wi-Fi works well, it can still struggle to transmit through thick walls, creating dead spots in the home.

Thankfully, the TP-Link Deco P9 has impressive tech under the hood that should help negate the issue, providing a solid, reliable wireless connection throughout the home.

It’s a tall drink of water

The Deco P9 comes in a pack of two or three, and each unit is identical – there isn’t a ‘main’ unit and other points like some mesh Wi-Fi systems.

The cylindrical P9 units themselves are largely nondescript, although we must admit they’re a lot taller than the likes of the Google Nest Wi-Fi and Tenda MW6. That means the units stand out in the room, and the fact that they only come in one finish – white – means you’ll probably notice them no matter where they’re placed.

Atop each unit, you’ll find a grille in the shape of the TP-Link logo, with a glowing logo in the centre that doubles as a status indicator for easy troubleshooting if something goes wrong. Don’t worry, TP-Link understands that LED lights can be annoying – especially if placed in a bedroom – and included an option in the smartphone app that lets you disable the indicator during the night.

On the rear of each Deco unit you’ll find an Ethernet port, providing a stable wired connection for PCs, consoles and any other Ethernet-equipped device you might want to connect to the internet. It might sound like a basic feature that’s not worth mentioning, but you’d be surprised at how many mesh Wi-Fi systems don’t offer the functionality.

The Deco P9 might not be the most stylish option available, but it more than makes up for it in terms of smarts and power.

A breeze to set up and use

Like most Mesh Wi-Fi networks, the Deco P9 is incredibly simple to set up; you simply download the Deco app for iOS or Android, plug the units in, connect a unit to your router and follow the instructions in the app to set up the Wi-Fi network. In our case, setup took no longer than five minutes and there were no issues during the process.

Once set up, you can begin to set up the various features of the Deco P9 system. Via the app you can easily create a guest network, blacklist specific devices from connecting to the internet, prioritise devices (like consoles and streaming devices) and, most importantly for families, parental controls.

You can create a separate profile for each family member and associate devices to each account, and from that point you can control various aspects like limiting the time spent online and blocking access to categories of websites or specific sites. You can even track user browsing history to make sure that your little ones aren’t going on websites they shouldn’t be.

There’s also integration with Amazon Alexa, allowing you to completely shut off internet access at important times – like dinner – with your voice.

There’s power under the hood

Of course, it’s all about the Wi-Fi connectivity, and the Deco P9 has a trick up its sleeve. Unlike most mesh systems, the P9 combines both AC1200 Mesh Wi-Fi and AV1000 Powerline capabilities, using your home’s electrical wiring to create a stronger connection between the individual Deco units to improve not only the network speed but the stability and range too, with TP-Link claiming the three-pack Deco system can cover an area of up to 6000 square foot – more than enough for most homes.

The Wi-Fi and Powerline combination also means the Deco P9 system thrives in an area where traditional mesh Wi-Fi systems struggle; transmitting between thick walls. We’re not saying you won’t notice any difference as you put some distance between you and the Deco units, but it’s certainly better than what we’ve experienced with the mesh-only Tenda MW6 system and is backed up by our benchmark results.

The Deco P9 can also connect up to 100 devices, perfect for smart home enthusiasts. We don’t have 100 devices to test the claim, but we do have around 30 connected at any one time and we’ve not noticed any connectivity issues across smartphones, tablets, consoles, smart home gadgets or anything else we’ve got connected to the Mesh Wi-Fi system.

Now, on to the all-important benchmark results.

We tested the three-pack Deco P9 system in four places in a typical three-bed terraced home. We started off right next to the router, located in a room upstairs at the front of the house. We then moved into the bedroom next door at a distance of 5m, before going downstairs to the rear of the house and, finally, into the garden for the ultimate test of range and network speed.

Compared to the mesh-enabled Google Nest Wi-Fi, which topped out at 400Mbps, the Deco P9’s 609Mbps offers more bang for your buck, but it deteriorated as we made our way through the house. Bear in mind that Wi-Fi benchmarks are only designed to give you an idea of performance, and you might get better – or worse – performance depending on various factors including the layout of your home, Wi-Fi channel congestion and more.

Either way, it’s still a significant improvement compared to the Virgin Media Hub 3, which struggled to maintain a connection at the rear of our house and didn’t reach our garden at all.

The TP-Link Deco P9 system isn’t as expensive as some triple-unit options in the market, costing £199.99 from the likes of Amazon and Currys in the UK. For those with smaller homes, TP-Link also offers a smaller two-pack at a more affordable £149.99.

Though it wasn’t available at launch, the Deco P9 is now available to buy in the US – but only in the original three-pack edition. It’ll set you back $199.99, and it’s available from Amazon.

While it might not have the Google Assistant smarts of the £239/$269 Google Nest Wi-Fi or Alexa integration like the £329/$429 Netgear Orbi Voice, the Deco P9 is more budget-friendly and offers unique features that improve wireless connectivity, the feature that really matters.

To get a better idea of the mesh Wi-Fi market, take a look at our selection of the best Mesh Wi-Fi systems.

The Deco P9 might not have the most conspicuous design, but that’s a relatively minor complaint. The combination of mesh Wi-Fi and Powerline adapted by the Deco P9 is a huge bonus, offering both impressive speeds and a stable connection – even though thick walls. It supports up to 100 devices at any one time, and each unit features ethernet ports to connect wired devices where necessary.

The accompanying app, unlike some counterparts, is well-built and user-friendly, offering the ability to customise the Wi-Fi network, create a suite of parental controls, prioritise specific devices and more. You’ve even got access to a monthly internet connectivity report if you want – it’s niche, admittedly, but it’s there if you want it.

Most importantly, it blankets the home in Wi-Fi, completely eliminating any dead spots you might have and – like in our case – extending coverage further than ever before.

The only downside? It misses out on the faster Wi-Fi 6 support, meaning newer devices won’t run at their theoretical top speeds.