Foldables still have a long way to go to prove their worth, and Lenovo’s decision to pitch its folding PC at the more conservative business market is a sign of the company’s confidence in the X1 Fold. And so far that confidence seems well placed. The X1 Fold looks slick and feels slicker from a hardware perspective, leaving us only with a few concerns about how well Windows 10 Pro will handle the new form factor – and how long buyers might have to wait for 10X to come along and make it right.

Foldable phones have been grabbing headphones for so long that they almost feel like old news, but folding PCs have gotten a lot less attention.

That makes a certain amount of sense – computers haven’t made the same transition to full-screen devices that phones have, and regular laptops have technically covered folding pretty well for a decade or two anyway. That won’t stop companies from wading in and doing their best anyway, and the first to actually bring a foldable PC to market looks to be Lenovo with the ThinkPad X1 Fold.

We got the chance to play with it at CES 2020 to find out whether Lenovo is ready to raise, or if it’s time to fold.

The X1 Fold is due out in summer 2020 – which is still pretty vague – and will cost the princely sum of $2,499. That’s undeniably an awful lot of money, but with foldable phones like the Galaxy Fold and Motorola Razr hovering around $2000 themselves, dropping two and a half grand on a PC-sized equivalent begins to sound almost reasonable. 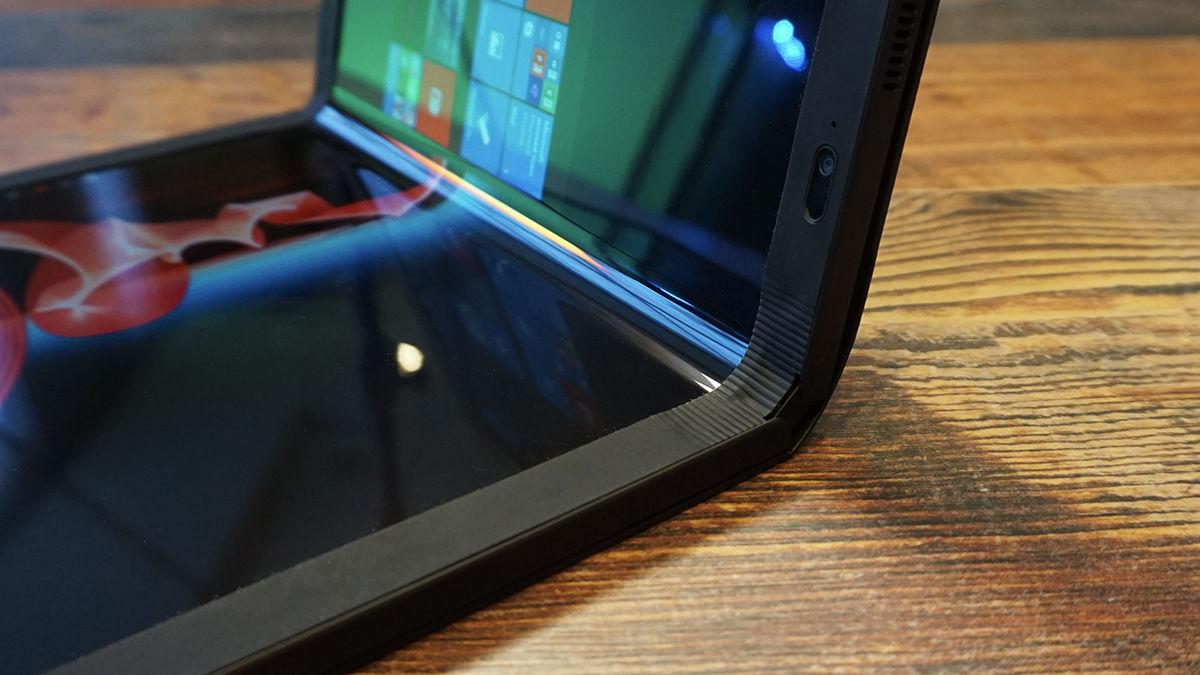 Design and build: A Fold that won’t fail

If there’s one thing that Lenovo is keen to push with the X1 Fold, it’s essentially that it doesn’t want to be associated with Samsung’s phone of almost-the-same-name.

That made headlines for all the wrong reasons when it launched, promptly broke, and had to be re-launched a few months later. By contrast, Lenovo’s message is clear: this thing is sturdy, it’s safe, and it’ll last.

That’s part of why it’s a ThinkPad (Lenovo’s business line) and not a Yoga (the consumer side of the business). ThinkPads are designed for durability, and so the engineering team was able to leverage that expertise here.

The screen itself is a 13.3in pOLED built out of multiple layers, with flexible plastic on top and foil and carbon fiber underneath that help minimise dents and scratches. The bezel is wrapped in silicone that a) gives you something to grip onto, and b) adds drop protection and a bit of extra dust proofing.

Then there’s the hinge. This uses a similar mechanism to the upcoming Razr from Motorola (a Lenovo subsidiary), pushing the screen crease into the back of the body as it folds. That keeps a larger curve even when the Fold is closed, making the screen less vulnerable and the crease much harder to spot. 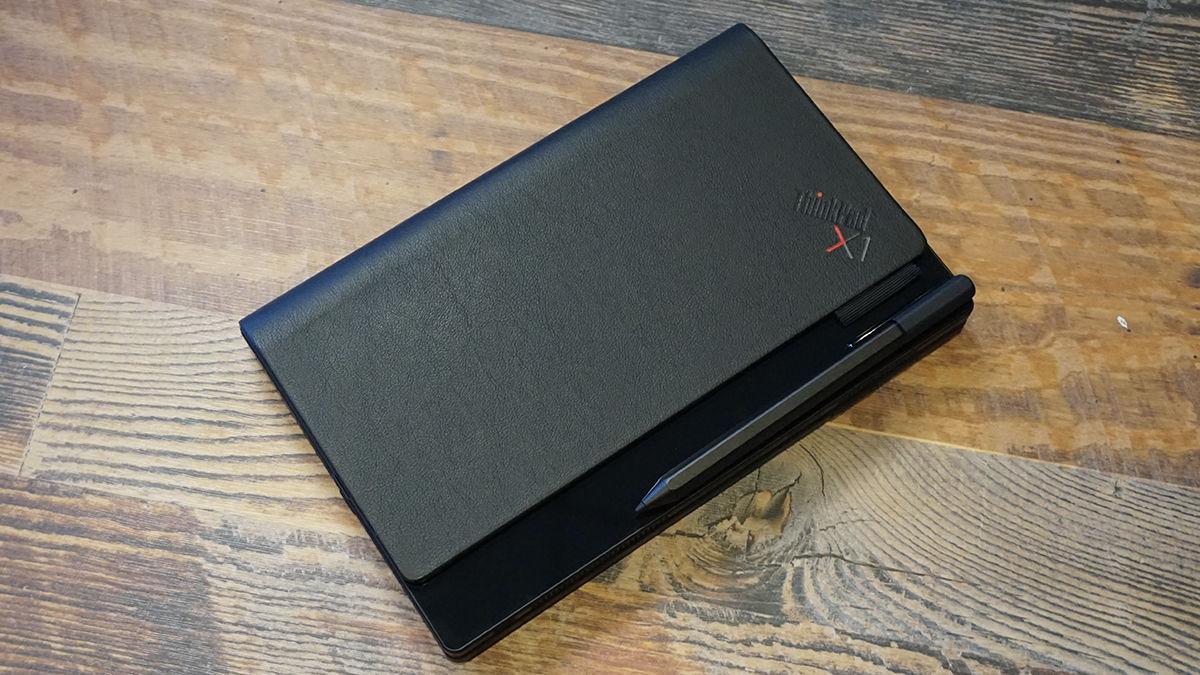 There are plenty of other smart touches across the X1. The outer leather layer sits an inch away from one edge of the device when it’s closed, but moves across to cover the full body when open – a snazzy touch that also lines up the included stylus to the edge for easy access when the PC is open, while tucking it away from the edge when it’s shut.

The leather layer doubles as a stand, with a bright ThinkPad red accent on the inner layer to prop the machine up in either landscape or portrait. The USB-C ports are on different edges of the device, so whichever way you hold it you’ll have one on the top and one on the side too.

Then there’s the keyboard. A small wireless keyboard with built-in trackpad is included as standard with the X1 Fold, but there’s more to it than that. It can be used away from the display for a desktop monitor setup, or can magnetically attach to one half of the screen to create a traditional tablet form factor. Close the device like this and the keyboard not only comfortably sits inside the closed device, it even wirelessly charges while it’s there.

The end result is a foldable that feels functional. Lenovo has done its best to cover as many use cases as possible, with convenient design touches to make each feel as painless as possible and enough durability that you can use it day in, day out without having to worry about being too precious with it. 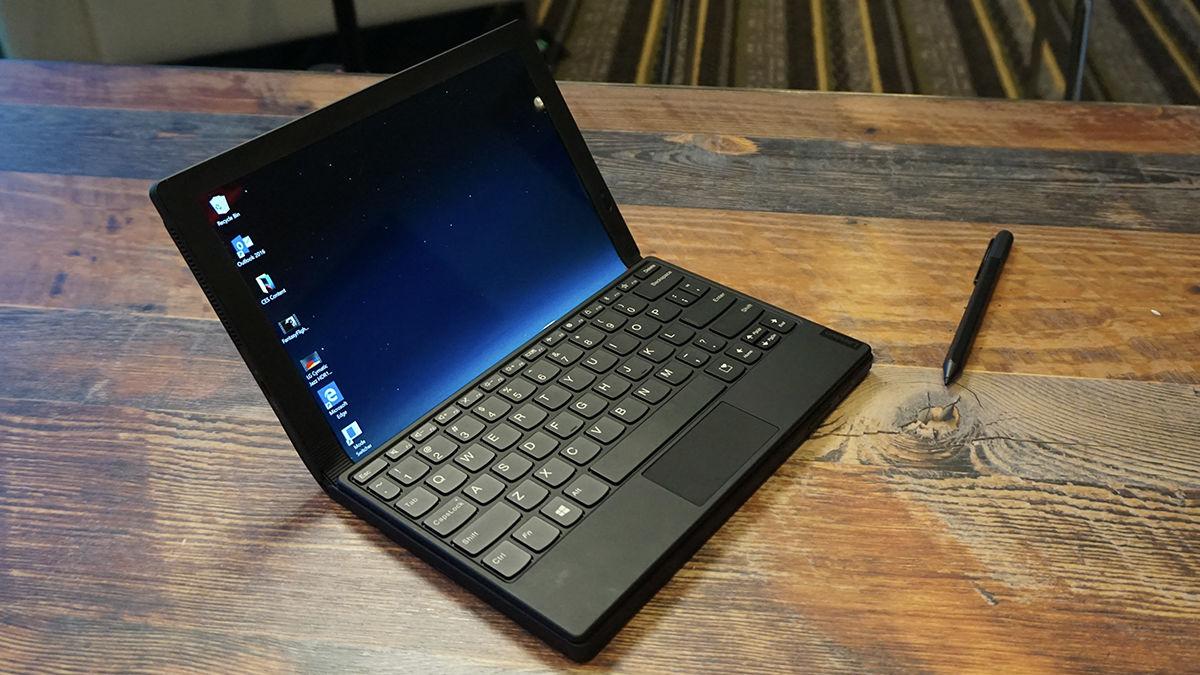 Specs and software: Built for pros

With a form factor that’s closer to a tablet than a traditional PC, you’d be forgiven for assuming that the X1 Fold runs on lighter hardware and software than some rivals, but Lenovo has done its best to prove that the new form factor doesn’t require skimping on specs either.

The company is still being coy about the processor – an ‘Intel Core Processor with Intel Hybrid Technology’, which sounds a lot like Lakefield, but we can’t be sure. Unsurprisingly there’s no discrete GPU, but other specs include 8GB RAM and up to 1TB of storage.

The 50Wh battery should deliver a really solid 11 hours of use, and the Fold includes 4G connectivity as standard, with an option to upgrade to 5G. 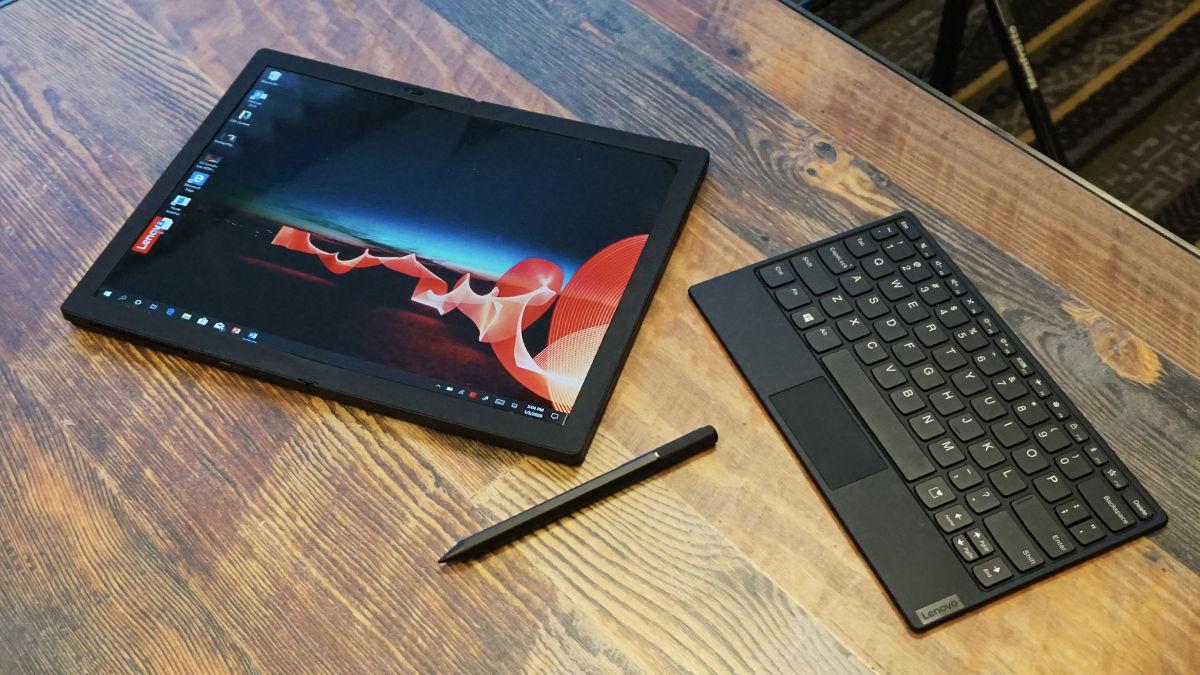 Since this is a ThinkPad Lenovo is shipping it with Windows 10 Pro as standard, but there’ll be an upgrade to Windows 10X – Microsoft’s upcoming dual-screen take on its OS – as soon as it ships.

In the mean time Lenovo has included its own basic software implementation, which lets you switch between using the screen as one display or pinning software to each half for split-screen. It gets the job done, but it’s a little awkward, and you’ll also still have to manually re-size windows when you attach the keyboard, as it won’t automatically switch off the display underneath it and re-size windows accordingly.

Foldables still have a long way to go to prove their worth, and at first blush Lenovo’s decision to pitch its folding PC at the more conservative business market might feel misguided.

It all begins to click when you factor in the ThinkPad line’s strong rep for build quality and lightweight, practical designs – essentially this is a sign of Lenovo’s own confidence in the X1, a bold declaration that it’s already good enough to meet the demands of its business consumers – and their deeper wallets.

And so far that confidence seems well placed. The X1 Fold looks slick and feels slicker from a hardware perspective, leaving us only with a few concerns about how well Windows 10 Pro will handle the new form factor – and how long buyers might have to wait for 10X to come along and make it right.