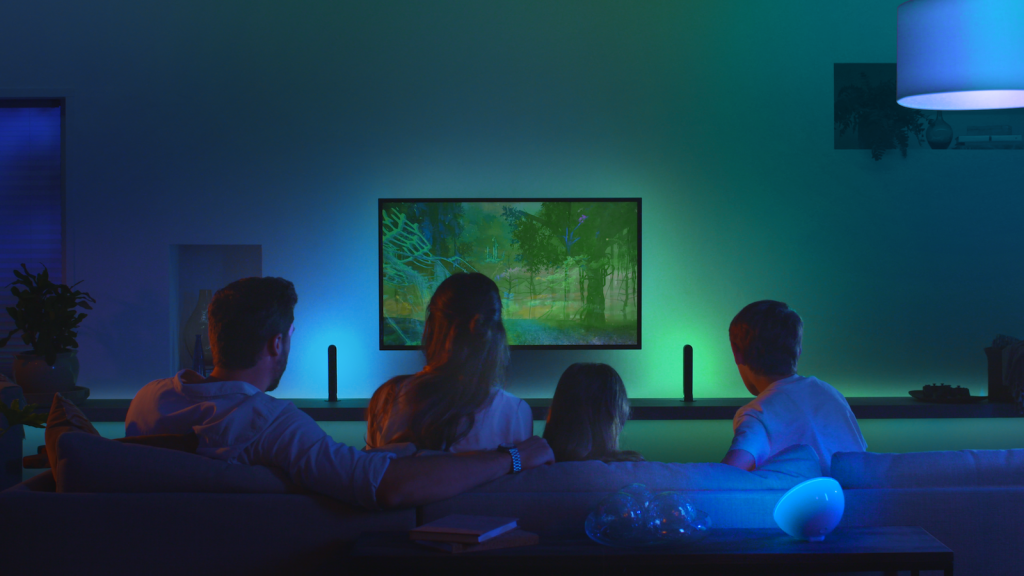 The Philips Hue Sync Box is an essential accessory for any Philips Hue owner, offering an immersive TV-synced light show that really enhances the movie-watching experience, although small issues like not being able to switch source without the app and performance issues when gaming stop it from being perfect.

The Philips Hue Play Sync Box is the ultimate accessory for Philips Hue smart light owners, offering a way to connect your TV to your lighting system for a more immersive viewing experience. It’s not a new concept, as it has been available in the form of the Philips Hue Sync app for PC for a while, and there’s similar functionality available on Philips Ambilight and Ambilux TVs, but it’s the first time the tech has been available for the masses.

But at £229/$229 without any Philips Hue lights included, does the Sync Box offer enough to tempt consumers? I’ve spent a lot of time using the Philips Hue Play Sync Box when watching movies, binging series and playing games, and here’s what I think.

The Philips Hue Play Sync Box isn’t the most budget-friendly accessory in the world, coming in at £229/ $229 exclusively via the Philips website – and that’s not including the cost of the smart lights you need to make the most of the system if you haven’t got them already.

With that being said, we’d only recommend picking up the Philips Hue Sync Box if you’ve already got an existing Philips Hue setup that you can link it to. You’re free to splash out on an entirely new setup, of course, but you’ll be spending quite a bit of money to get started.

The Philips Hue Play Sync Box brings TV smarts to your Hue setup, but the box itself is largely nondescript; it’s black, just under an inch tall and sports a single front-facing LED to display the current status. There’s also an IR passthrough to presumably control your devices via the Sync Box, but according to Philips, that’s not in use just yet.

The main action can be found at the rear; it’s where you’ll find the four HDMI inputs, along with an HDMI output that goes to your TV.

All four HDMI 2.0 inputs support 4K@60Hz playback with HDR10, making it ideal for playing games as well as watching movies, but while it does offer Dolby Vision and HDR10+ passthrough, it can’t sync the content with your Hue lights. Considering the Hue Sync Box is a premium product  – especially when you combine it with the cost of the various Hue bulbs – it’s a surprise to not offer support for Dolby’s high-end processing tech.

Like most smart devices these days, the Philips Hue Play Sync Box is controlled exclusively via the Philips Hue Sync app for iOS and Android. Yep, that’s a separate app from the main Hue app you use to control the lights, and you might find yourself switching between the two quite a bit. I’ll go into more detail about what the app can do next.

The setup of the Philips Hue Play Sync Box is actually quite straightforward assuming you’ve already got a Philips Hue light system set up in your house. All you need to do is plug in the box and download the app – the app should pair with the box automatically via Bluetooth, making the Wi-Fi setup process much easier.

The only time you’ll need to venture away from the box is when it comes to connecting to the Hue Bridge, as you have to push a button on the Bridge to kick-off the pairing process.

Once you’re all connected, the next step is to select an Entertainment area. If you’ve used Philips Hue Sync app for PC in the past, chances are you’ll have already set one up, but most users, including me, have to set up an Entertainment area from scratch. That’s totally acceptable – it’s just the fact that you have to switch to the main Hue app to create it that’s a bit of a pain. It’s certainly not a streamlined process, that’s for sure.

The actual process of creating an Entertainment area is easy – you drag and drop the locations of your lights relative to your TV so the box knows which colours to display and when to create an immersive viewing experience. Once you’re done, you can head back to the Hue Sync app and carry on adjusting your setup.

The main purpose of the Hue Sync app is to tweak how your lighting performs depending on the content you’re watching; you can switch between movie, music or game modes to change how the lights respond to content, with, for example, the music mode reacting to audio rather than video. You’ve also got the option of disabling it completely if you just want to watch a bit of TV without all the bells and whistles of smart ambient lighting.

Beyond selecting the correct mode for your content, you can change the intensity of the light show. You can opt for a subtle change of colour that’ll take a few seconds to a more intense setting with near-instant replication of what’s on-screen. It largely depends on the kind of content you’re watching, as fast-paced Hollywood blockbusters perform better on a higher intensity than standard TV shows, but again, this is all down to your personal preference.

The Hue Sync app not only allows you to tweak the setup of your lights, but also provides a way to manually switch HDMI sources if your device(s) don’t play nicely with HDMI-CEC.

It’s an improvement over standard HDMI switches that force you to press a button on the unit to switch inputs, but it’s also a far cry from the convenience of having an actual remote to use – especially if other family members or friends want to use the TV when you’re not around. That’s made worse by the fact that it takes the app a few seconds to connect to the box, so you’re sat waiting when you want to change the source.

It comes down to preference, of course, but it’s worth considering before you pick one up.

An immersive, but not perfect, experience

The basic idea is to have the Hue light bars behind or either side of your TV, but you’re free to place them anywhere, and that in part defines the type of experience you’ll have. If you have lights behind the TV you’ll get the full Hue Sync Box effect, while having lights set up at either end of your sofa, for example, provides light effects you’ll only catch in your periphery – but even that’s enough to improve the standard movie-watching experience.

Before I talk about the experience on offer, it’s probably a good idea to explain the layout of my setup; I have two Light Bars either side of the TV, along with a Hue-enabled lamp in the left-hand corner of the room (level with my sofa) and a LightStrip Plus roughly aligned with the lamp in the right-hand corner.

I must admit my TV is also Ambilight-enabled, which does further improve the light show, but I turned it off for much of the review period to better reflect the standard experience. Nonetheless, if you’ve got the Sync Box and either a Philips Ambilight or Ambilux TV, it’s safe to say you’re in for even more of a treat.

Generally speaking, the Hue Sync Box tries to recreate the same lighting conditions as the scene being displayed, whether that’s bright sunlight streaming in from the left of the display – causing lights to the left of the TV to brighten while those to the right dim – or displaying bright, vivid bursts of colours showcased in nature documentaries like David Attenborough’s Seven Worlds, One Planet.

It’s a transformative experience that’s hard to put into words; much like virtual reality, it’s something that has to be experienced for yourself to truly understand what’s on offer here. It’s a simple idea with great execution that really intensifies the movie-watching experience. It does work with standard TV shows and I’ve used it while binging series like Peaky Blinders on Netflix, but I find it’s best suited to watching dramatic Hollywood blockbusters and vivid animations.

The biggest issue I really have with the Hue Sync Box performance is when it comes to playing games. Despite offering support for 4K@60fps playback and a dedicated Game mode to improve the reaction times of the connected lights, the gaming experience is currently the Sync Box’s problem area.

When it works, it works very well. That’s partly because of the nature of game design, utilising a continuous single camera shot rather than different camera shots with different compositions and light effects, making the light effects flow more naturally and allowing you to become more immersed in the game you’re playing.

The issue is that, due to some kind of glitch in either the hardware or software, the Hue Sync Box occasionally glitches out when playing games, leaving me faced with a black screen (or static, as there was on one occasion) and while it usually fixes itself in a few seconds, timing is crucial when playing games – especially when it comes to online multiplayer games where you can’t pause and wait for the signal to return.

The glitch happens sporadically, and I can’t get to the bottom of what triggers it, making it impossible to predict. I’m hoping that it’s a software issue that can be fixed via a software update, rather than an issue with the hardware itself, but I hope it’s fixed soon – it’s not exactly what you’d expect from such a premium product, after all.

The Philips Hue Play Sync Box is the ultimate accessory for any Philips Hue owner, offering an immersive TV-synced light show that improves the movie-watching experience to no end, and it only gets better with more connected Hue products. Lighting conditions match that of the scene you’re watching, and thanks to the customisation on offer via the Hue Sync app, you can tweak the performance to match your preference.

It’s not perfect though; the Sync Box requires a second Philips Hue app to be installed, and the app – at the time of writing – is the only way to switch between HDMI sources if your set-top box or media player doesn’t offer HDMI CEC support.

There’s also an issue when playing games that randomly causes the screen to go black for a few seconds when the smart lighting is enabled. I’m hoping it’s a quick fix instead of a hardware issue as, when it works, games really showcase the best of the smart lighting tech.