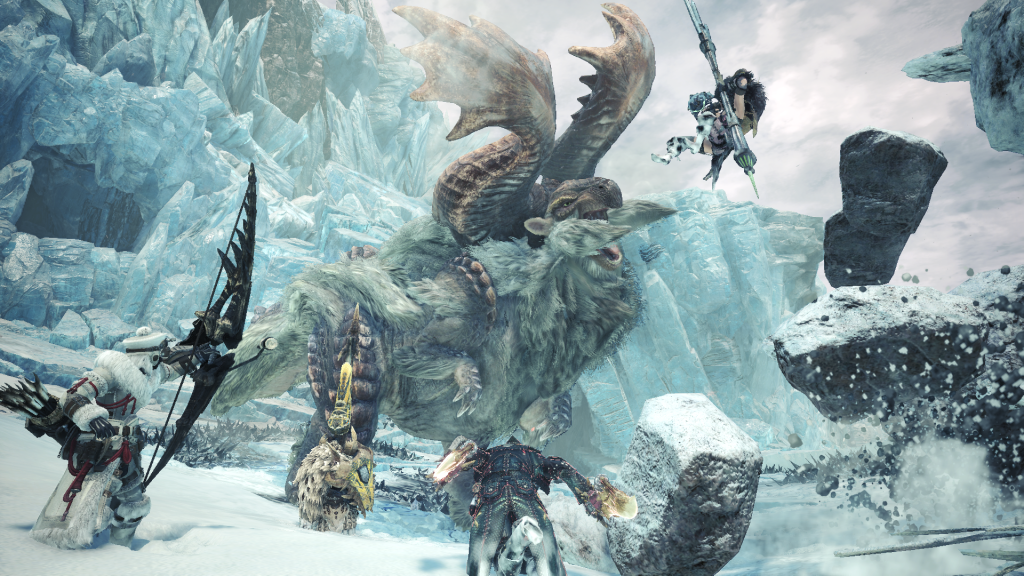 Iceborne is another generous layer of content for Monster Hunter World fans, but along the way it also makes a lot of welcome changes that existing players and newbies will enjoy.

There’s a lot of new additions to the Monster Hunter World formula with Iceborne, and I’ll talk about a few of them, but the one that sits at the front of my mind when i’m playing is the Clutch Claw.

The Clutch Claw is a short-range grapple gun that allows you to tether yourself to a monster’s body part and pull yourself towards it: this is great for closing the distance on smaller monsters to give them a good stabbing, but you can also use it to, say, affix yourself to a flying monster’s wing and attack the wing directly, tossing yourself into the sky to bring the hurt.

But you can also use it to stick yourself to a monster’s weak spot – latching on to their face perhaps, or an area you’ve torn the armour away from – and start unloading slinger roads into their face to hit them with status effects while your monster hunting colleagues move in for the kill. 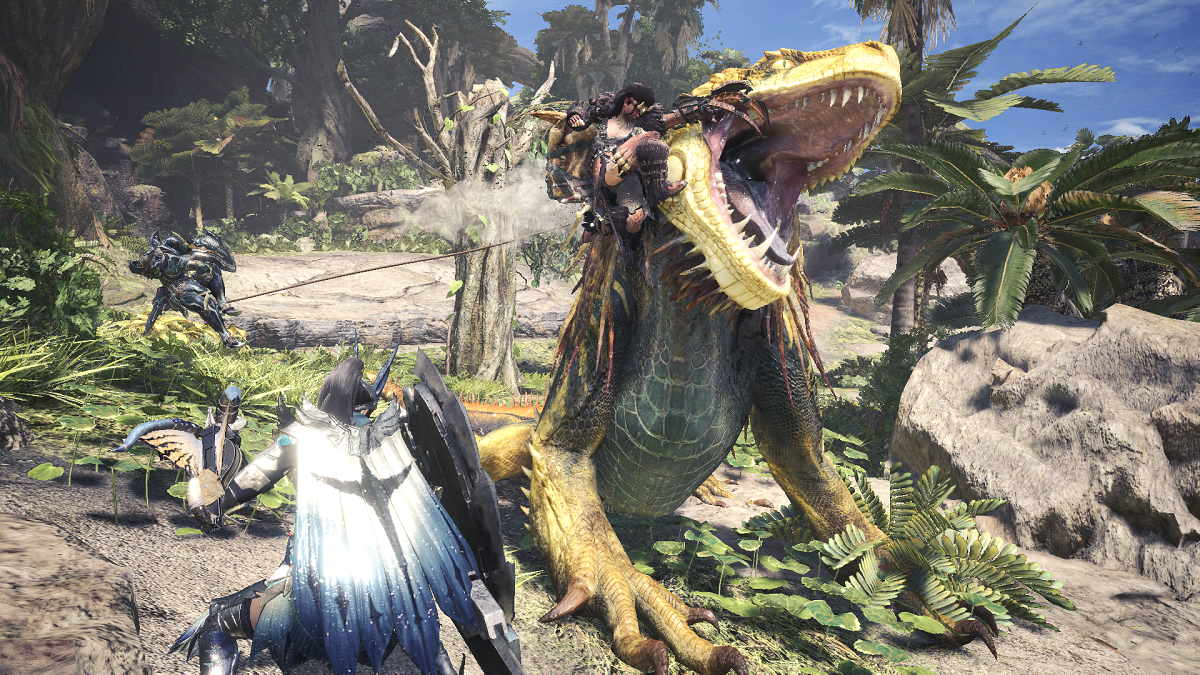 I like the Clutch Claw because it ups the pace of combat significantly, and gives you more to do, which is a huge improvement on the combat of Monster Hunter World which, despite the mesh of interconnected systems that underpin the combat, could devolve into you leathering a monster’s leg until it fell over.

Iceborne does a lot to even out some of the thornier parts of the Monster Hunter World experience: MHW (as i’ll be calling it now to save myself a huge headache) is an intricate collection of different systems, locking together to create a compelling MMO-like experience.

The core loop of grouping out with other monster hunters, eating the right type of meal, buffing the right type of weapon, gathering the right type of gear and then tracking the monster before an inevitable clash is… phenomenal. There’s nothing else like it in video games. However, these deep systems can make it a tough game to love, especially if you’ve not been keeping up with the game’s PSP entries.

Personally, MHW is a game that I could clearly see the quality of at launch, but I struggled to actually get into. Iceborne has, for me, eased that burden. While the game is pushed as a DLC for Monster Hunter World, the amount of changes and content here is substantial and it feels like a whole new game, even if the core of that game can still feel dense and impenetrable.

These are the best PS4 games to play.

Stranger in a strange land

MHW, and by extension Iceborne, is a game about breaking down impenetrable things and asserting dominance. Each monster you fight is an enigma and then over time you learn more and more about them. Whether that’s how best to throw down with them, what they have that you can exploit and eventually every enemy in the game goes from a huge obstacle to a simple exploitable resource node. 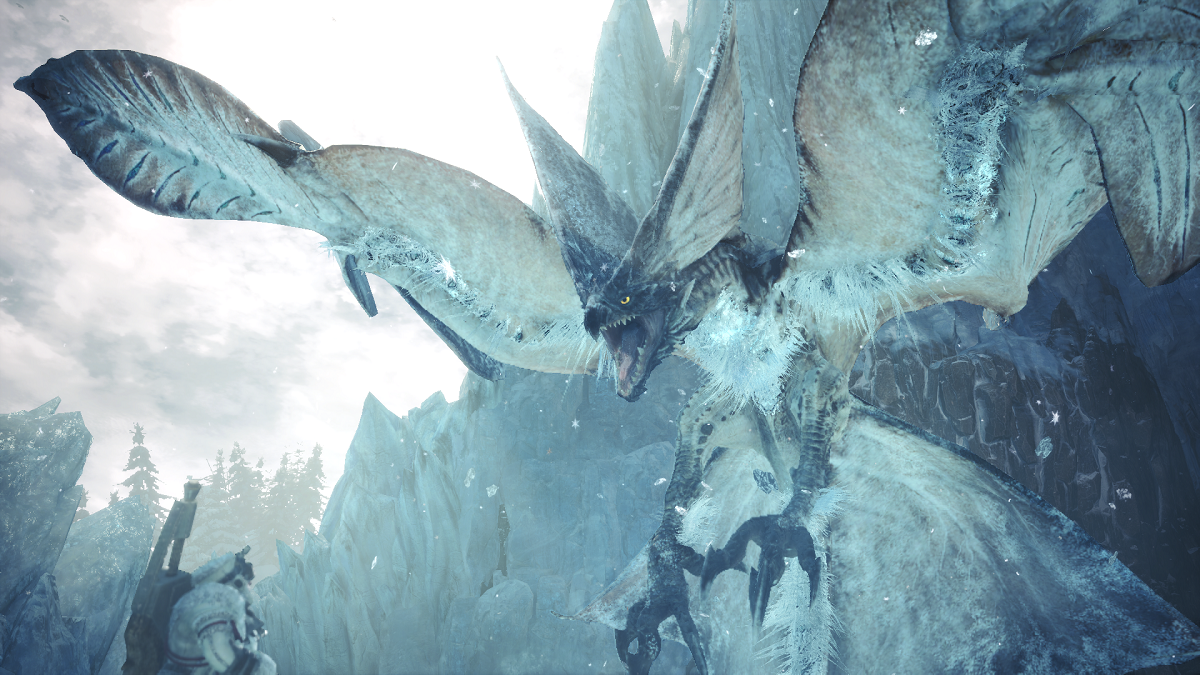 That’s kind of what Iceborne does too. The systems are terrifying and alien and then little by little you learn to prize bits away from the tough outer shell and you get to the meat underneath. Players who have done this already with the base game will have a leg-up but at the very start of Iceborne you’ll be tossing out all of your gear from the old days and starting fresh.

I frequently oscillated between tourist and conquerer. Gawping at a bunch of things that would definitely kill me and then, hours later, seeing those same things cowed, ready to be shipped off for research or harvested for parts. Take a look at our top  Monster Hunter: World tips and tricks.

While you can play MHW with people, when there’s no one else you’ll be joined by an adorable little cat, a Palico, that’ll help you do the things you need. If you’re playing with a ranged weapon the Palico will get stuck in, elsewhere it can heal you, stun monsters, play music or even toss Meowlotov Cocktails at monsters. No, seriously. 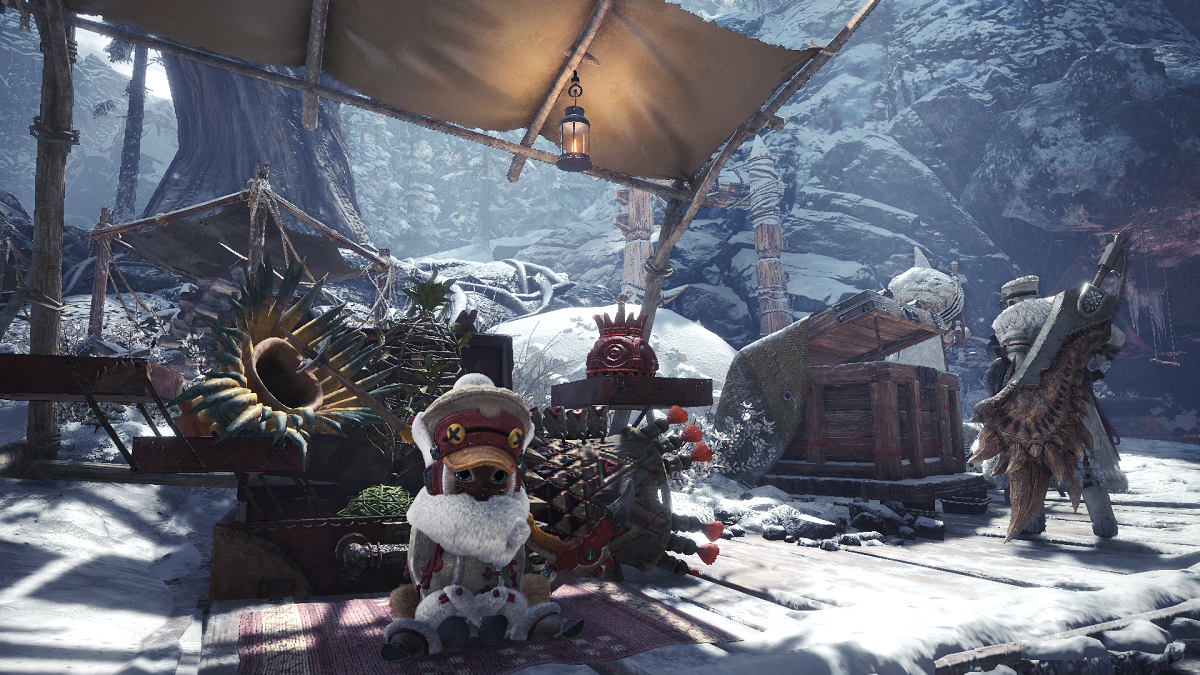 This makes the pain of playing solo easier, but you really want to experience Iceborne with other players. Teaming up makes it more bearable and if the console launch of the game and PC multiplayer of the base game is anything to go by, it’ll be easy to pick up groups of people to play with.

The combination of several different builds and the unexpected interactions with other players can make even rote fights interesting, and while we’ll have to see how it goes after launch, at the moment there’s a supportive community here dedicated to kicking seven shades of snot out of every monster going.

Not that repetition is a big problem because while MHW definitely had a narrower selection of monsters that some of the previous PSP-based games in the series, Iceborne adds a ton of new stuff. Some of these additions are simple such as an Anjanath that spits lightning during fights.

Elsewhere, you meet things like the Beotodus, a snow-churning wyvern that is Iceborne’s first real test and a stunning reward for finishing the main game’s story. Then there’s the Tigrex, a tiger dinosaur hybrid that celebrating meeting me the first time by jumping on my face and ruining my day. 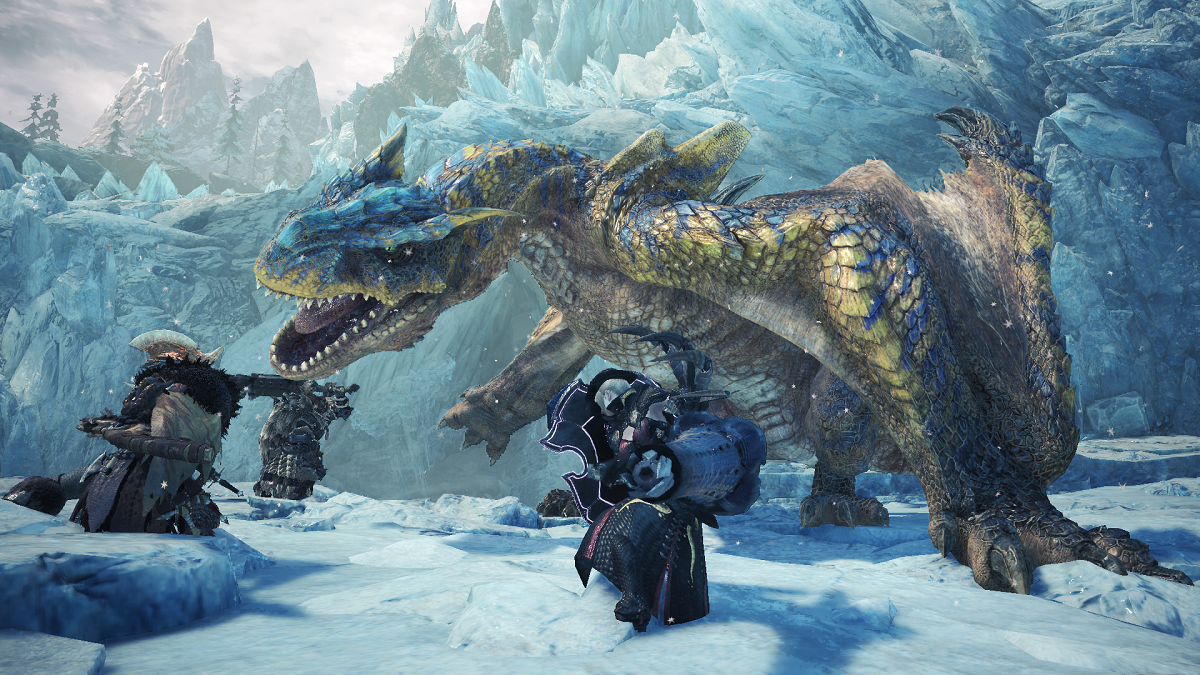 Iceborne’s newest fights aren’t 10-minute battles, with many of these new fights being 40-minute slobberknockers. The game requires commitment, and as a result, it’s not the perfect point for new players to jump into, but it is the most polished entry in the series so far.

Honestly, Monster Hunter World and Iceborne are somewhat impenetrable to me. But it’s hard not to admire the spectacle of the game, and I’d like to applaud Iceborne.

The addition of the Clutch Claw shows how deeply Capcom understands Monster Hunter and how it flows, with this single addition completely changing up how fights play out. There’s also something to be said for grappling up to a huge monster’s face and stabbing him repeatedly in the eyes, which is a pastime I didn’t appreciate until I was out there doing it.

If you love Monster Hunter World, this is a must-have expansion. If you bounced off it, this is a good chance to reevaluate. Many of the additions here are thoughtful, and it’s definitely the high point of the series so far.

The game can be exhausting and difficult, but it rewards your patience with a real sense of accomplishment.