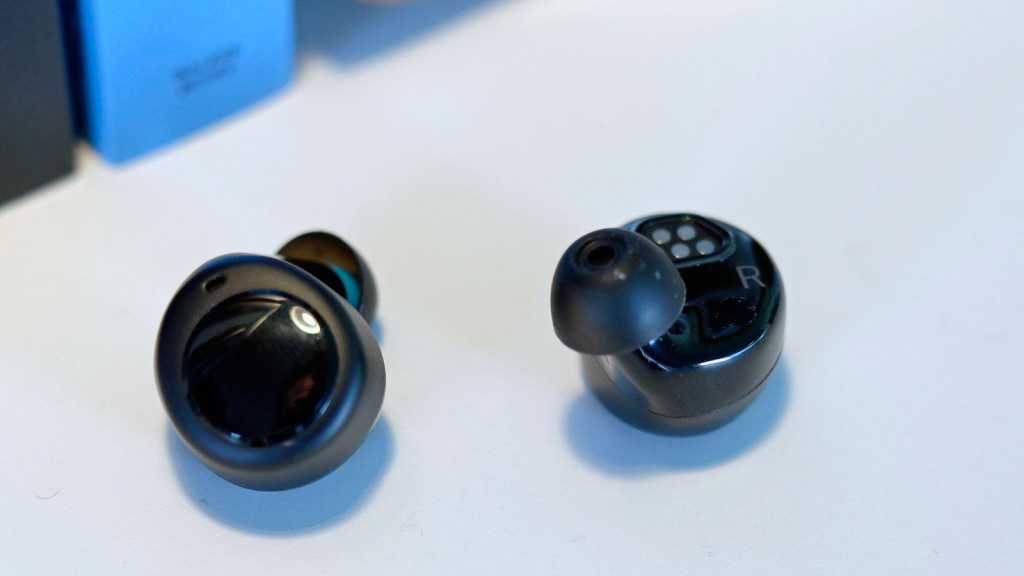 They might look plain, but the Echo Buds offer active noise cancelling at a great price. Hands-free Alexa is useful too, and audio quality is good enough for most people.

Amazon’s desire to integrate Alexa in as many products as possible has led to the Echo Buds. A category of headphones kick-started by Apple, it was almost inevitable that Amazon would want to have a pair of true wireless earphones to compete with the AirPods as well as Samsung’s Galaxy Buds and numerous other rivals besides.

And there’s certainly plenty of competition: just search Amazon for true wireless earbuds and there’s no end of choice – whatever your budget.

Oddly, Alexa is not the main headline feature here: it’s Bose Active Noise Reduction. And that’s a surprise at this price: the AirPods Pro cost more than twice as much while Sony’s WF-1000XM3 will set you back around £180 / $200.

Given that Amazon is late to the game, the Echo Buds’ design is plainer than you might expect. They’re all black, as is the soap-bar charging case. In fact, the only hint that this set of ear buds is made by Amazon is the glossy logo on top of the case. 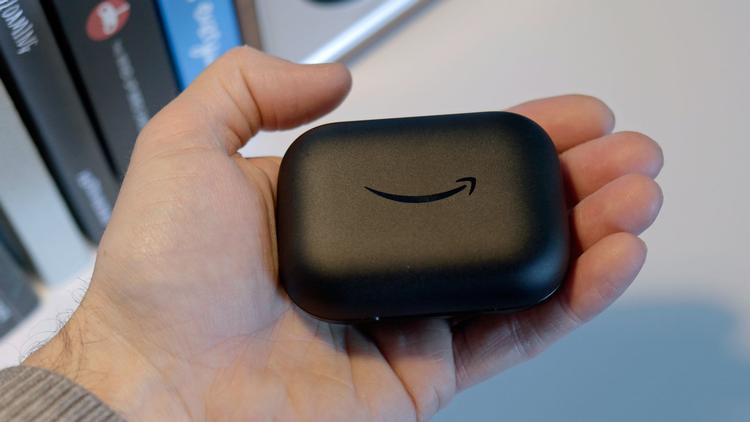 The buds have a similar design to the Galaxy Buds, Creative Outlier Air and Jabra Elite 65t, and rely on a great fit in your ear canal for three reasons: noise isolation, sound quality and so they don’t fall out when you move.

To achieve the latter, there are three sizes of ear tips in the box along with three sets of ‘wing tips’. These rubber bands go around the body of each Echo Bud to help ensure a snug fit. You don’t have to use them, but you can if you find the rubber tips alone aren’t enough.

We found that they stayed put for activities such as walking, but anything more energetic the wing tips were essential to prevent them falling out. And they’re not as comfortable to use for long periods with the wing tips fitted.

The glossy circle on each bud are touch-sensitive buttons. By default a double-tap will enable pass-through, or if already in pass-through mode, the action will disable it and enable noise reduction. A tap and hold action will call up your phone’s assistant, whether that’s Google Assistant or Siri. 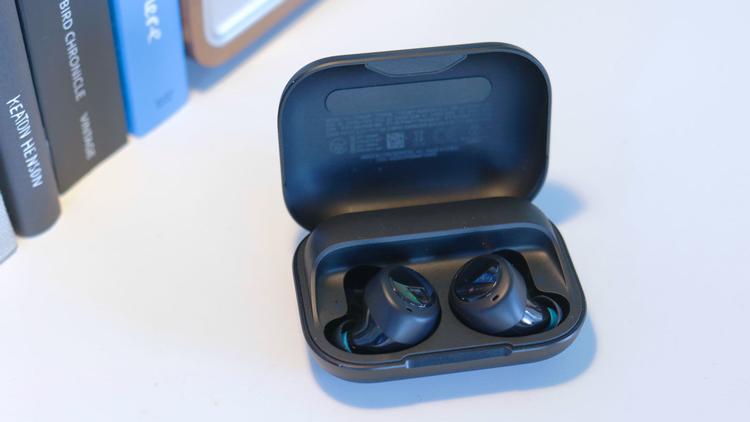 Via the Alexa app you can change what these actions do, per bud. So you can configure four different things, including calling up Alexa as a backup if the wake word doesn’t register in a noisy environment. We found they worked reliably even with wet fingers.

Each bud has three mics, and these can be disabled (to stop Alexa listening) from the Alexa app. 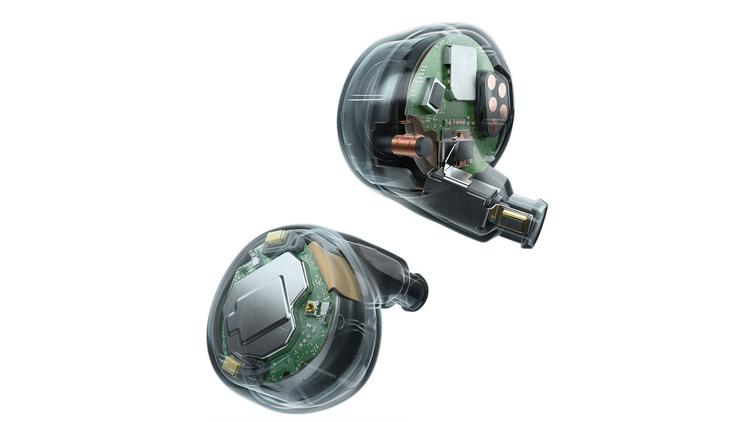 You’ll need the app on your phone to use Alexa: when paired with another device such as a laptop or PC, you can’t use Amazon’s assistant. 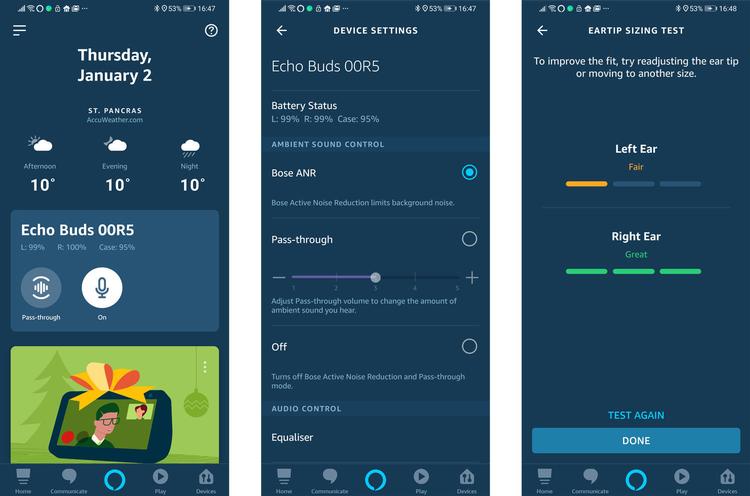 The buds are good for about five hours’ playback and the case’s battery will recharge them around three times, giving a total runtime of 20 hours or so. A brief 15-minute charge will give you about two hours’ use, which is handy if you’ve just boarded a plane but the batteries in the buds are flat.

Five hours per charge is about average for true wireless earbuds, but it’s made more impressive here because that’s with noise reduction on and we found the claim was a bit conservative, if anything.

An LED on the case glows green, yellow or red to indicate how much power remains, and it pulses blue when the buds are in pairing mode: the buds themselves have no LEDs. Handily, there’s a button on the bottom of the case so you don’t have to open it to check the battery level.

One of the attractions of the Echo Buds is built-in Alexa. She works exactly as she does on an Echo smart speaker, which means hands-free activation. All you need to do is say “Alexa, what’s the weather tomorrow” and you’ll hear her answer in your ears.

That’s an advantage over rivals which force you to press a button or tap one of the buds to activate the phone’s assistant.

Alexa’s capabilities here are identical to any Echo speaker, so you can add items to your shopping list, turn on compatible plugs, switches and lights at home, set timers, get a news briefing or find out what’s next on your calendar.

Some skills are obviously more applicable than other to the Echo Buds, such as music control. You can ask her to play a specific track, album or playlist from any compatible streaming service or turn up the volume (there’s no physical volume control on the buds).

Similarly, you could say “Alexa, resume my audiobook” or “Alexa, play the Criminal podcast on TuneIn”.

While on the move, Alexa’s ability to make calls and send messages can be useful. Strangely, this isn’t part of the setup process when you pair the buds in the Alexa app. Instead, at least on Android, you have to dig into the phone and SMS settings to allow Alexa access. 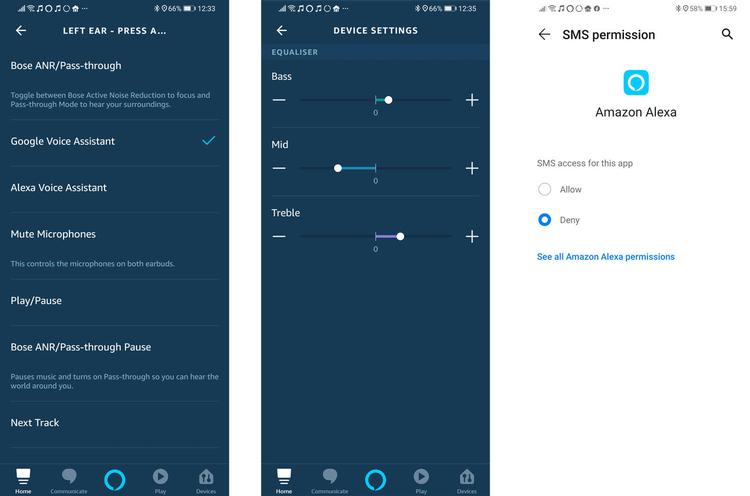 Plus, you can ask her to answer an incoming call to make the process completely hands-free.

Frustratingly though, she can’t yet send messages in Whatsapp. If you merely ask her to “send a message to Lewis Painter”, she will default to using the messaging part of the Alexa app which no-one really uses and, of course, won’t work if the contact doesn’t use the Alexa app.

Bear in mind that Alexa needs an internet connection to work, so won’t be great if you don’t have a good 3G or 4G signal.

The Alexa wake word is picked up reliably when it’s fairly quiet, but not in noisy environments such as a busy road, a train station or a restaurant. And in any busy environment you do feel a bit of a fool shouting “Alexa, play the next song”.

Before we talk about sound quality, let’s first deal with noise reduction. This is, as we said at the start, the headline feature of these earbuds. It isn’t the same as the active noise cancelling on Bose’s own headphones and is reduction rather than cancelling. We’ve forgiven other sets such as the identically priced Cambridge Audio Melomania 1 for omitting this sort of feature.

And the good news – as you’d hope from Bose – is that it’s great. Once you’ve found the right combination of ear tips and, optionally, wing tips, you’ll already have excellent noise isolation. But enabling noise reduction by double-tapping a bud or using the Alexa app, things become much quieter. You can still hear loud noises, but it removes a lot of background noise.

That applies not just in relatively quiet environments, but also in noisier ones such as at train stations. It means you can still hear whatever you’re listening to without having to really ramp up the volume (of which there is plenty with these buds).

Amazon has used Knowles dual balanced-armature drivers here. These should offer more clarity than your run-of-the-mill dynamic drivers but in practice clarity is one of the Echo Buds’ weak spots.

They use Bluetooth 5.0 and support AAC when used with an iPhone, but it’s disappointing there’s no aptX support for Android users.

Auditioned alone, the Echo Buds are fine. Whether you listen to pop, rock, jazz, metal or any other genre, they handle everything equally well. They’re just not the best-sounding earphones we’ve tried: too little bass, too heavy on the mid-range and lacking overall clarity.

Interestingly, using the three-band Equaliser in the Alexa app can fix most of these gripes. Just take out some of the mids and add some bass and treble. Or, if you happen to own a Huawei P30 Pro – the phone we tested the Echo Buds with, just enable Dolby Atmos for a similar effect.

Obviously, using an equaliser or other audio trickery to ‘fix’ these issues isn’t ideal, but since virtually everyone who buys the Echo Buds will pair them with a phone and the Alexa app, it’s acceptable.

Overall sound quality isn’t bad at all, but you might prefer to spend more on the Sony WF-1000XM3 if you want noticeably better sound along with active noise cancelling. Conversely, you can spend less if you’re happy to forego the latter: try Creative’s Outlier Air for size at under £80 / $80.

If you’re wondering about microphone quality for phone calls, it’s very good. On our test calls, recipients said they could hear us loud and clear.

Audio lag isn’t bad at all, and we had no real issues with dropouts or Bluetooth connection problems. In fact, the only annoyance was that Alexa didn’t always respond to the wake word, or complained that she was “having trouble connecting.. please open the Alexa app to reconnect”. This was despite the Bluetooth connection being fine.

We wanted to like the Echo Buds more than we did. In so many ways they’re great: the noise reduction works well, they’re well priced, have decent battery life and of course there’s Alexa.

But they’re let down by slightly sub-par audio quality and – for us at least – that they weren’t as comfortable to wear as other true wireless buds we’ve tested.