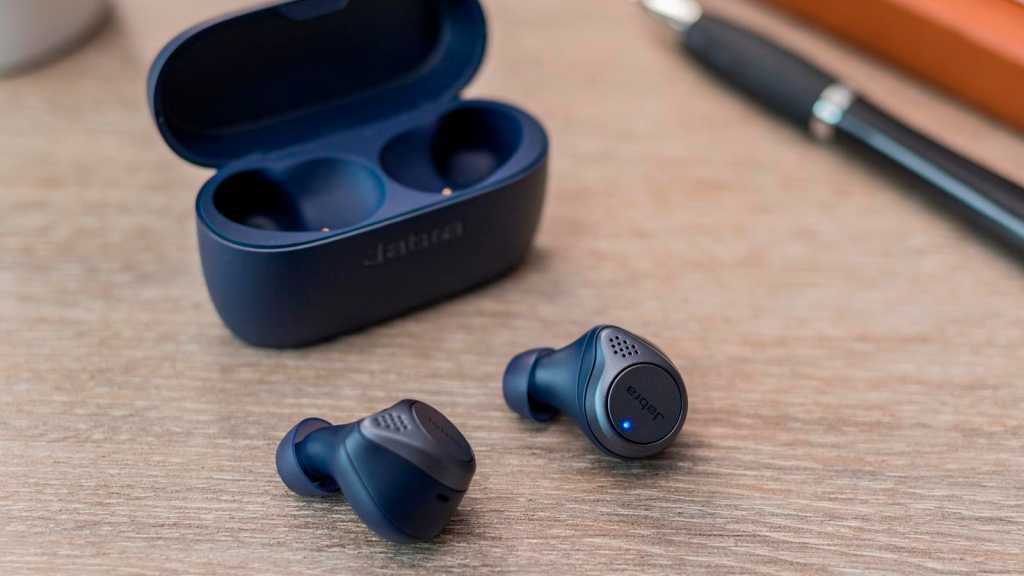 Top battery life, a durable waterproof design, and noise-cancelling all make the Jabra Elite Active 75t a well-rounded package for anyone looking for sports headphones and willing to pay to be sure that they’ll make it to the finish line.

True wireless headphones may still be in their infancy (it wasn’t that long ago that wearing AirPods in public was something to be embarrassed about…) but as Jabra enters its fifth year of making wireless earbuds it’s pretty clear they’re not going anywhere.

Its latest pair of buds, the Elite Active 75t – unveiled at CES 2020 in Las Vegas – follow firmly in the lineage of its first ever pair: 2016’s Elite Sport. Here’s how they shape up. 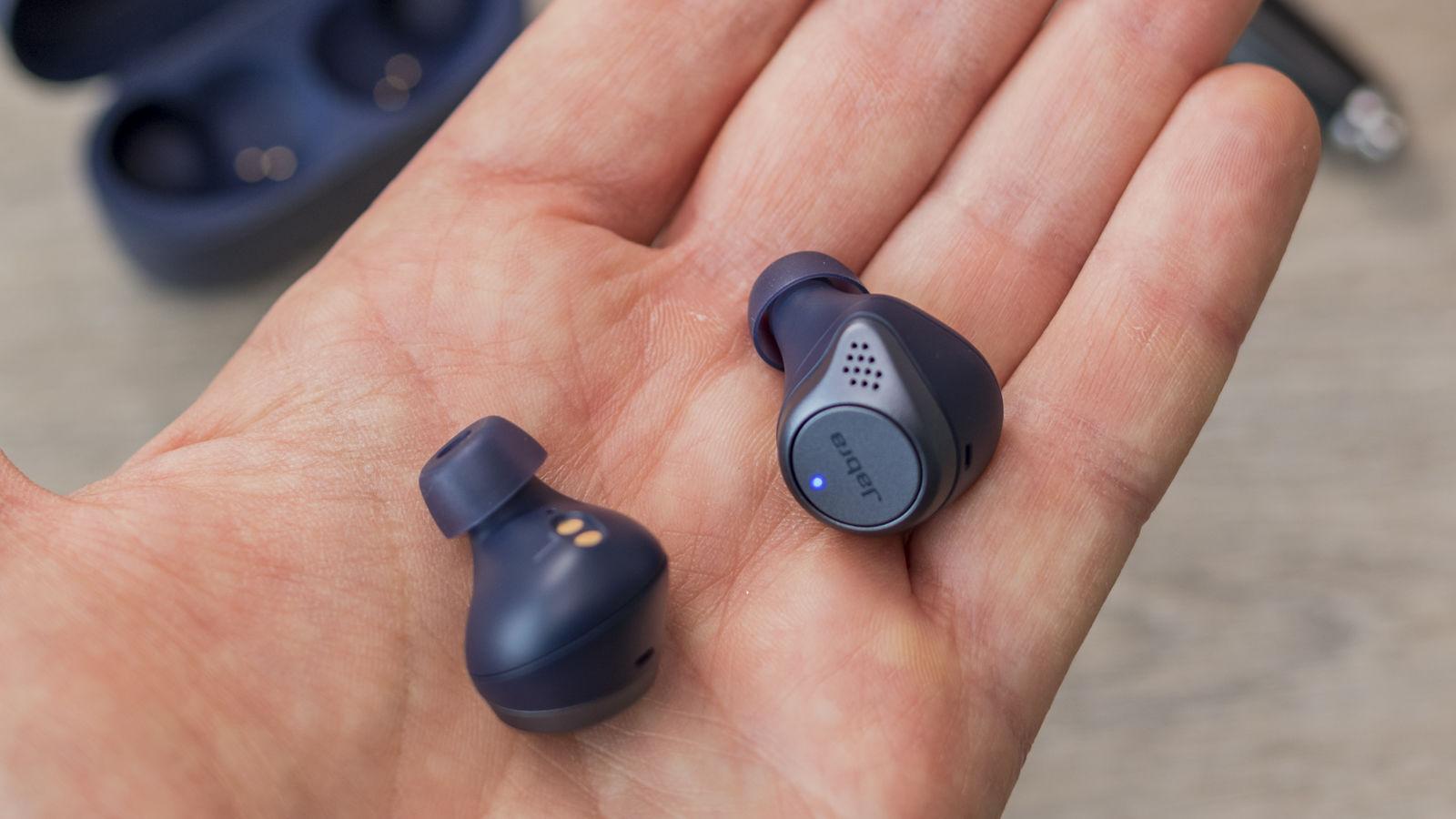 Jabra hasn’t exactly torn up the rulebook in designing the Elite Active 75t – in fact, set them next to 2019’s regular Elite 75t headphones and you’d be hard pushed to spot the difference.

In fact, the easiest way to tell isn’t to look at them, it’s to pick them up: the ‘Active’ ones are coated in what Jabra calls an ‘active grip’ surface. It’s a subtly tacky, grippy finish that makes the buds much less slippy without changing how they look. To be honest it’s something I’d love to see on more non-sporty wireless headphones – they’re all easy enough to drop without throwing push ups into the equation.

Controls are handled through a big physical button on each bud – both easier to use and more reliable than the touch controls you’ll find on less sporty headphones these days. As with any true wireless, you’ll have to learn which arcane combinations of button presses achieve specific functions, but you should get the hang of it before too long, and you can use the app to customise the controls as you wish, with different effects for a single, double, or triple tap on each earbud.

These are compact buds – some of the smallest on the market, and a whopping 22% smaller than last year’s Active 65t – which means you’re less likely to knock them out of your ears with an errant arm movement, especially combined with the grippy finish. That’s essential for anyone hoping to use them to work out beyond the confines of a gym, but the low profile is immediately appealing for the kind of weight lifting and HIIT training I prefer too.

Together with an understated aesthetic, the small size makes these less immediately iconic than the AirPods, but less obtrusive too, and they still look better than the likes of Bose and Sony have managed so far in the space. Function has definitely come first here, but form hasn’t been forgotten entirely. 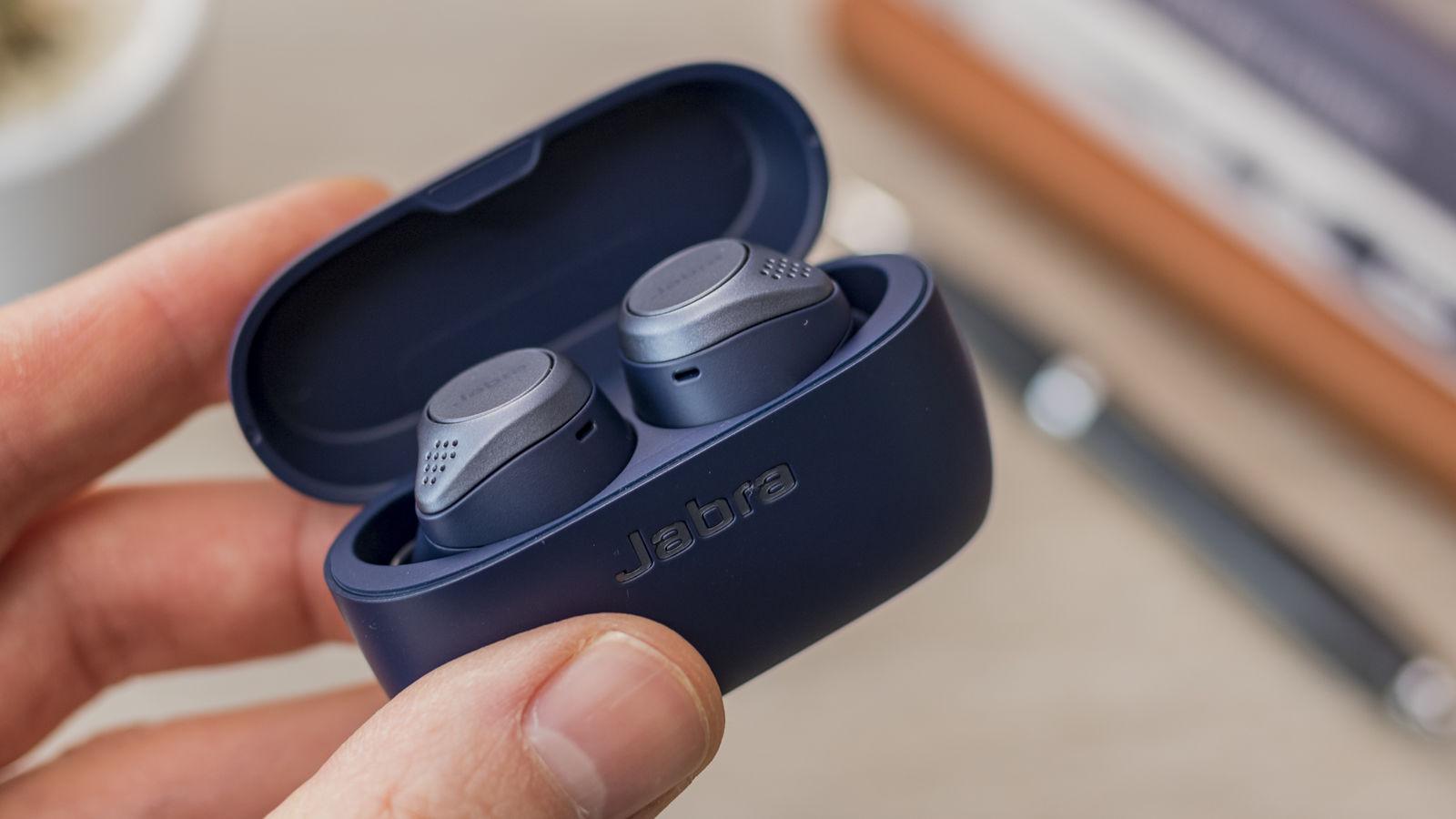 The range of colours helps. Most other brands still limit you to white or black, but Jabra is jumping on Pantone’s 2020 colour of the year bandwagon with a ‘Classic Blue’ finish, backed up by options including copper, titanium, grey, sienna orange, and mint.

Each colour comes with a matching compact battery case, and the buds attach magnetically so won’t fall out easily – something that probably should be standard but still isn’t. There’s not a lot else to say about the case: it’s compact, comfortably rounded, and has a simple engraved Jabra logo and a single USB-C charging port. There’s a single LED on the back that gives a rough sense of battery life by changing colour.

Finally, in line with the sporty aim these are waterproof, with an IP57 rating. That basically means they’ll be able to handle rain, sweat, and probably even a shower, but I wouldn’t take ‘em swimming. They’d fall out anyway. 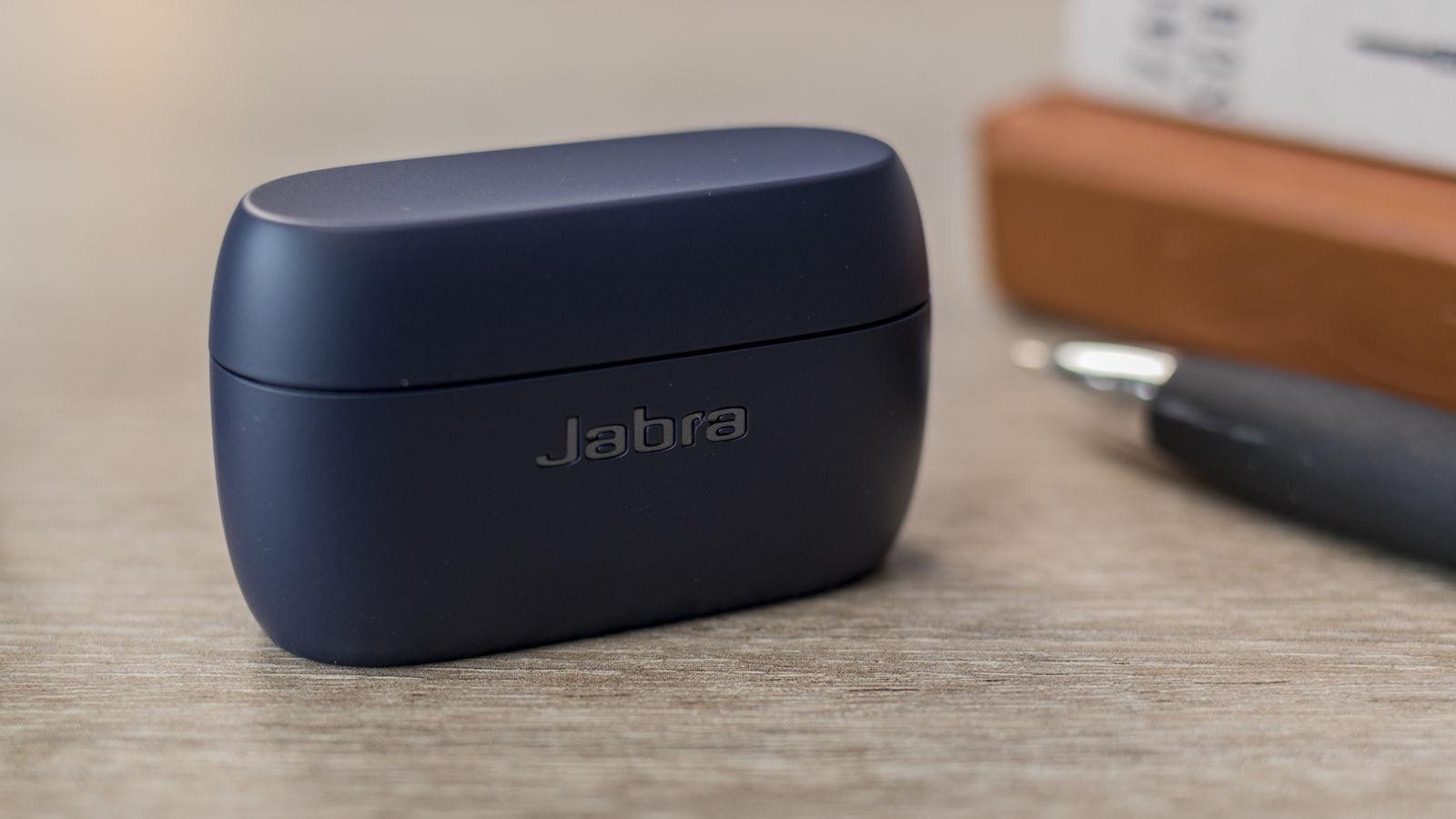 When it comes to sound, expect something solid but not exactly surprising. The default sound profile is fairly balanced, but the Jabra Sound+ app gives you the option to tweak things pretty extensively, with five separate sliders across the frequency spectrum, so you’re not limited to audio presets (though there are a few of those to help you decide what works for you).

There’s a decent range, and you can get quite a strong bass response if you crank it up, and conversely great clarity from the trebles, though I struggled to find an EQ setting that delivers meaningful bass without muddying things up a bit.

Since the headphones launched Jabra has updated the app to include a mode called MySound. This involves a quick hearing test – a couple of minutes or so – that assesses the frequencies you can hear and tunes your audio accordingly. I’ll admit I didn’t notice a huge difference in sound quality after applying it, but depending on your hearing range you may get more impressive results.

A separate post-launch firmware update has delivered noise-cancelling, and considering that the tech was added after the fact and not baked into the design it’s surprisingly solid. It helps that with a choice of three tip sizes you can get a decent sound seal to start with, but when activated the ANC is more than capable of blocking out the sound of cars on a busy road, which is all I could ask for, and there’s a slider with a range of settings so you can set the strength you prefer.

One annoyance is that there’s no option to add the ANC controls to the buttons on the buds, but I’m confident Jabra will add support in. And if ANC is a bit much for you, there’s also a hear-through mode you can turn on when you want to hear the sound of people (or traffic) around you.

Battery is more impressive. Jabra claims the earbuds will last 7.5 hours between charges, with 28 hours total in the case – one of the bigger battery lives you’ll find in wireless buds.

It’s partly because these are among the first to use a new ultra-low power Bluetooth component from Qualcomm, which means power consumption should stay just as light during calls or voice assistant queries as it does when simply listening to some tunes. 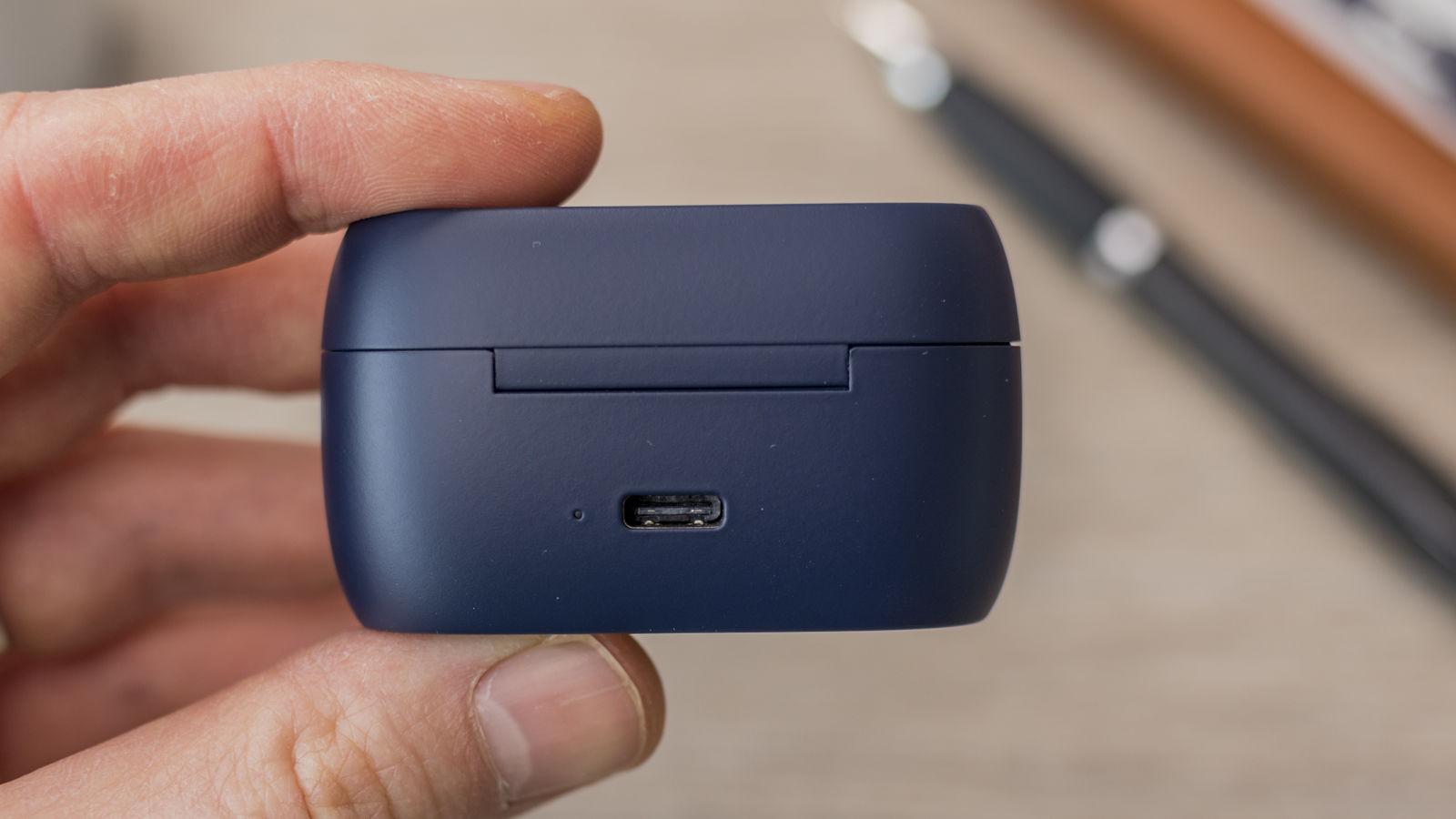 I’ve charged the case twice over a couple weeks of usage, so Jabra’s figures seem about right. The battery life for the buds themselves isn’t quite as extreme as the 11 hours from the Samsung Galaxy Buds+, but it’s enough to last all day which is all most people will need – and the 28-hour total charge is one of the best around.

Speaking of charging, 15 minutes in the case will give the buds an hour of playtime. That may not sound like a lot compared to phone charging speeds these days, but it’s not too shabby for true wireless. There’ll even be some wireless charging variants in certain colours, but not until April.

That’s actually more than the £159/$159 AirPods (though not their high-end Pro variant), but the strong feature set and sport-friendly design mean the high price shouldn’t rule these out for anyone who exercises enough to get the most out of them.

If you’re tempted but not sure what else is out there, check out our ranking of the best true wireless earbuds to get a sense of how the new Jabras stack up.

If your top priority is sound quality, you can probably do better than the Elite Active 75t while spending less. But that isn’t really the point here.

Top battery life, a durable waterproof design, and noise-cancelling all make this a well-rounded package for anyone looking for sports headphones and willing to pay to be sure that they’ll make it to the finish line.