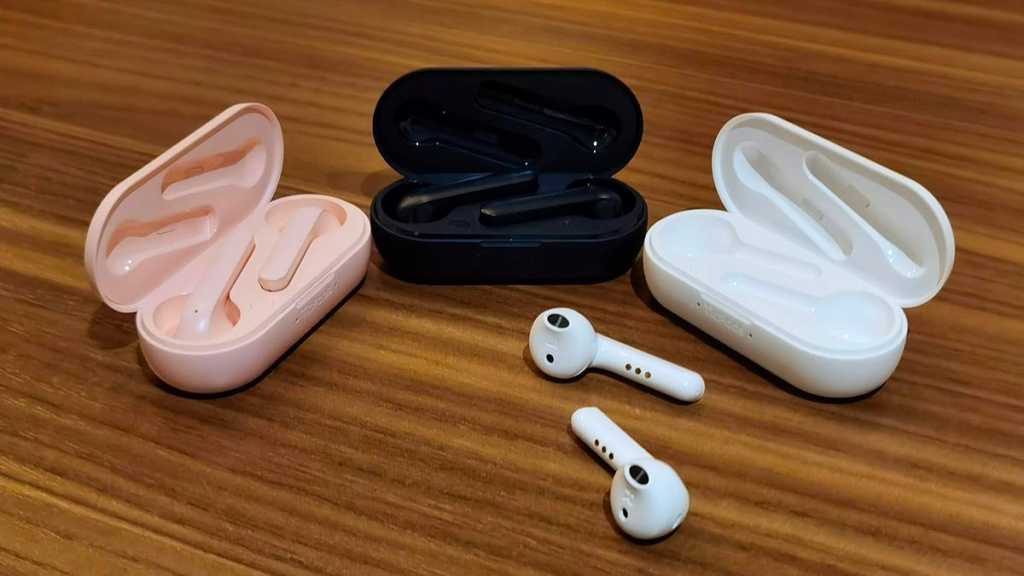 Mobvoi is giving users even more control when it comes to interaction with the TicPods 2 Pro. Alongside the return of “Tickle Touch”, new gesture and voice-based control make these a versatile set of truly wireless buds. An impressively small charging case and a considered range of colours also appeal, but not everyone will back Mobvoi’s decision to ditch the in-ear design of the TicPods 2 and 2 Pro’s predecessors, nor will some of the performance inconsistencies encountered.

Chinese AI specialist Mobvoi is bringing its second-generation true wireless buds, the TicPods 2 and 2 Pro, to the world.

Originally launching in China at the end of 2019, these new buds step in the opposite direction to Apple’s most recent wireless earbuds in one regard, whilst also gaining new functionality absent from their predecessors, the TicPods Free, in another.

The Chinese company first stepped into the true wireless space in early 2018, with the TicPods Free. Their stalked design immediately led comparisons to be drawn with Apple’s iconic wireless buds.

If you’re already sure you’re not tempted by TicPods 2 or 2 Pro, why not check out our roundup of the Best True Wireless Earbuds you can buy right now – comprised of everything we’ve reviewed so far.

While both the TicPods 2 and 2 Pro are already available to purchase in China, international variants were announced at CES 2020 (the Consumer Electronics Show) on January 7 and made available to pre-order on the same day.

Both versions are available to purchase through Mobvoi’s existing retail channels and its regional online stores starting January 15.

With this year’s iterations, the company is more closely aping Apple’s original true wireless buds from a design perspective, with an all-plastic body that forgoes the TicPods Free’s extended ear tips for a less-intrusive vented design (meanwhile, Apple’s new AirPods Pro move in the other direction embracing silicone ear tips, which are absent on the classic  AirPods).

While open-bud designs such as these are few and far between (Apple, Huawei and Razer being among the few major companies with similarly-fashioned products), Mobvoi apparently made the change from one generation to the next based on user feedback. The new design allows for passive passthrough of external sounds, for those who like to maintain a level of audio awareness about their surroundings.

The trade-off is weaker sound isolation, compared to the likes of the TicPods Free, plus a looser fit – especially when working out, where sweat against the plastic finish can cause the buds to slide out of your ears if you’re not careful (it’s worth mentioning these buds’ IPX4 certification against dust and water, though).

While functionality differs between the TicPods 2 and TicPods 2 Pro, the actual design and finishes you’re able to pick these buds up in remains consistent across both variants.

The included charging case resembles that of the previous generation, with accentuated wave-cut detailing along the top to add a bit of interest, however, Mobvoi’s also managed to make it 42% smaller, with the intention that it’s compact enough to fit into the coin pocket generally found in the average pair of denim jeans – a trait that does hold water in practice, even though it’s an undoubted squeeze.

The case and buds come in one of three colour-matched hues at launch: Navy and Ice (dark blue and white) which the TicPods Free were also sold in, alongside a new Blossom (pale pink) colourway – again, an inclusion that came out of Mobvoi listening to its users.

The punchy Lava (orange/red) found on the original TicPods is also set to feature, but not until later in the year, coinciding with the likes of Valentine’s Day in relevant markets.

While there’s no doubting how impressive the compact nature of the TicPods 2 charging case is compared to most of the alternatives out there, the layout and finish leaves a little to be desired.

For one, the plastic feels a little cheap and this sense carries across to the flimsy lid design too, which was likely kept thin to keep weight down but flexes all too easily when handled.

The buds snap magnetically inside the charging case with an angled overlap but the positioning of each bud seems counterintuitive to how the average user would pry them from their respective beds.

Like their predecessors, the TicPods 2 line features a touch-sensitive strip along the stalk of each bud. Both variants offer touch controls which the company calls “Tickle” touch; letting you change the volume, pause, play and skip tracks, make and end calls, and envoke your device’s virtual assistant.

Questionable naming aside, it’s an impressively robust means of interaction and intuitive enough to work out without much practice. Some controls can be customised by way of Mobvoi’s companion app too, which also doles out battery percentage breakdowns for each bud, plus the charging case.

Here’s where the Pro model steps out in front most prominently. Unlike the standard TicPods 2, the Pro model also packs in what’s called TicHear and TicMotion.

The first adds voice controls to the experience, letting you summon your phone’s virtual assistant (be it Android or iOS-based) using the phrase “Hey, Tico”, which works reliably well, even in noisy surroundings. There are also voice commands for the aforementioned touch controls, covering both media playback and call handling.

TicMotion, meanwhile, adds gesture-based controls, such as shaking your head up and down or side to side to accept or reject incoming calls.

We were dubious about this feature’s reliability but sure enough, so long as you make deliberate shaking motions with your head (just a couple of nods or turns – no need to give yourself an injury), the TicPods 2 Pro convert your motion into call acceptance or rejection with surprising reliability.

Once you start to gauge the sensitivity of the accelerometers at work, this feature comes in handy when your hands are full and someone’s trying to ring you.

Despite different Qualcomm-based Bluetooth chips between the two variants, both 2 and 2 Pro make use of the latest Bluetooth 5.0 standard. Support for the company’s own aptX audio profile is on hand when the TicPods are paired with compatible Android phones too, but the buds default to standard AAC support when used with iOS devices.

We did encounter an inconsistency across devices, with one bud sometimes failing to connect to iOS devices, while some Tickle touch gestures, like pause and play, only partially seemed to work on mobile, but then behaved as promised when used in conjunction with MacOS.

Noise reduction is serviceable on the 2 Pro, with call recipients stating that conversations are discernable, even with background din, however, switching to the phone’s own microphone and earpiece still makes for a cleaner call experience.

The buds themselves each contain a 30mAh battery, while the case sports a 390mAh cell of its own. Battery life across the board is par for the course, considering the competition, with the richer feature-set of the Pro model actually resulting in weaker longevity compared to the more reserved TicPods 2.

Mobvoi quotes four hours of music playback from the buds themselves but a reduced 20 hours, compared to 23 hours, by the time you exhaust the 2 Pro’s charging case.

In practice, four hours seemed conservative, with our testing leading to around five hours of use from the buds before needing to go back in the case, however, without clear understanding of the setup, audio source and volume that Mobvoi gleaned its official figures from, it’s unsurprising that there’s a level of variability when it comes to longevity.

As for the case – expect to charge it daily and you should be fine. 20 hours, broken down into intermittent stints actually only means you’ll likely have just-enough to get through a day’s use. Based on the figures, the standard TicPods 2 should get you from one day to the next with a little more breathing room.

It’s also worth noting that, for whatever reason, the TicPods can only be charged via a USB-A to USB-C lead, and USB-C to USB-C leads simply won’t work.

Mobvoi’s new true wireless buds offer a rich feature set, a considered range of colours and aggressive pricing for those after some AirPods alternatives.

The functionality offered up by the TicPods 2 Pro in particular highlights the company’s strengths in AI and user interaction – something that’s prevalent across its other products, like the equally fresh-faced TicWatch Pro 4G LTE.

Where they fall down is with regards to a couple of fundamentals: the open-style ear tip’s fit won’t be for everyone and longevity measures in at just enough for daily use, no more.