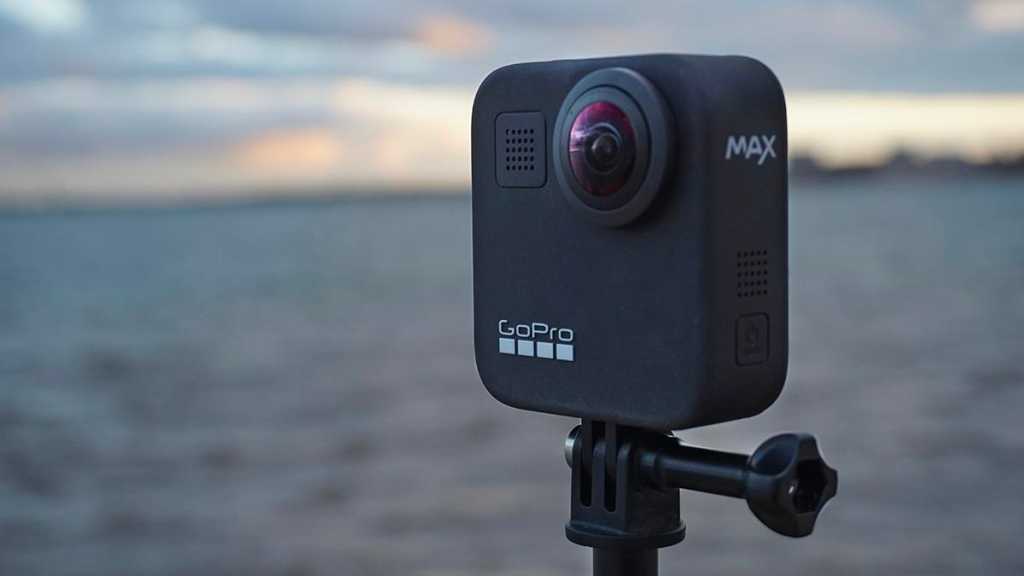 The GoPro Max completely rethinks how to shoot and edit 360-degree video compared to the company’s last attempt, the GoPro Fusion. It makes working with 360-degree footage a breeze and doubles as a capable GoPro Hero action cam too, boasting astounding image stabilisation and great versatility across its feature-set and shooting modes. Better colour science, low-light performance, image fidelity and UI stability are all areas to work on but the issues in their current guise are minor when you look at the overall offering provided by the Max.

GoPro is known for its line of Hero action cams, the latest Hero 8 Black being one of the best upgrades to the series so far. However, the company also dabbles with other imaging dark arts, including 360-degree video, and its latest offering in that department is the new GoPro Max.

A spiritual successor to the company’s first attempt at a 360-degree camera – 2017’s GoPro Fusion – the Max (stylised as ‘MAX’) tries to fix the missteps that the Fusion presented users and, in a more general sense, make working with 360-degree video an easier and, dare we say, more enjoyable process; all while trying to stay true to what a GoPro should be.

The Max launched alongside the Hero 8 Black and comes in at £479.99/US$499.99; £100/US$100 more than the 8 Black, claiming the title as the company’s most expensive camera right now. The Fusion cost a whopping US$599 when it launched and upfront, everything that the Max offers leaves the Fusion in the dust.

You can pick up the GoPro Max directly from the GoPro website, where the company will throw in a 64GB SanDisk Extreme microSD card for good measure (in select markets). It’s also available for less from the likes of Amazon, Currys PC World and  John Lewis in the UK, as well as Amazon US and  BestBuy, Stateside.

If you want to see what else GoPro (and its competitors are/) is working with, check out our Best GoPro 2020 feature.

GoPro opted for a decidedly standout aesthetic with the Fusion that set it apart from the standard Hero cameras of the time. With the Max, it looks as though the company has reversed its approach, meaning the camera looks far more in-keeping with GoPro’s standard lineup of action cams.

The near-square silhouette boasts well-rounded corners, making it easy to grip, helped by that fact that the majority of the body is covered in a lightly-textured rubber-like finish. The battery door (which is hinged but is also completely removable) is finished in black anodised metal, with a reassuringly solid latch mechanism that doesn’t feel like it has any risk of coming unclasped by accident. 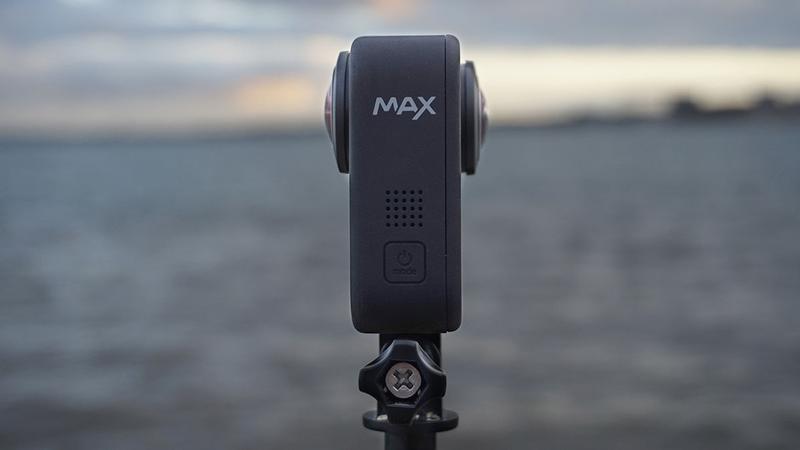 Sliding the latch down to open the battery door also reveals a USB-C port (for both data and charging) and the microSD card slot – just one this time, as unlike the Fusion, which was effectively two cameras ‘fused’ together, the Max only needs to record to a single SD card – one of a number of notable improvements over its predecessor.

You’ll find two buttons on the Max: a power/mode switch button on the side and a shutter/record button on top, while on the bottom resides two fold-out black metal prongs.

Unlike previous GoPros, both the Max and Hero 8 Black feature these metal ‘fingers’, which negate the need for a separate mounting bracket and instead let you attach the camera straight into or onto any GoPro mounts, sticks or the like that you plan on using. When you’re done, you can simply fold the prongs away and they sit flush with the bottom edge of the Max’s body. Very tidy.

GoPro explained that, like the battery door, if the camera did take a severe tumble, the hinges on the prongs are designed to break off without damaging the camera itself and can be easily replaced. There’s also a touchscreen on one side but no monochromatic screen on the other, as on the Hero line, primarily because the Max doesn’t technically have a fixed ‘front’ or ‘back’. 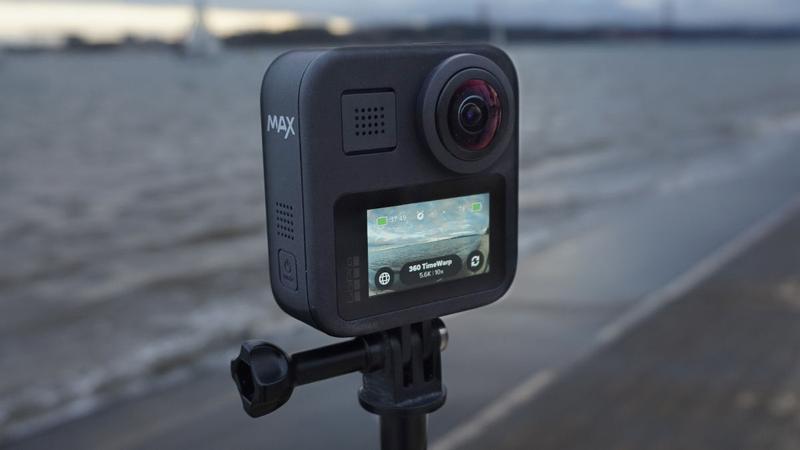 It’s important to note that the Max is a 360-degree camera first and a rugged camera second. It’s waterproof up to 16ft (5m) and can take a tumble without issue but those protruding lenses are far more susceptible to scrapes and damage than a standard action cam’s recessed lens, if you’re not careful.

Thankfully, GoPro includes thick, sturdy lens caps for both lenses, which fit snuggly in place and are unlikely to pop off without a lot of persuasion. What’s more, if there’s a scenario where you think the Max’s lenses will be at risk of damage when filming, you can also attach clear protective covers to each – the trade-off being that image clarity may take a hit, as well as an increased risk of glare and lens flare when using them.

The Max relies on the same GP1 chip that’s powered GoPro’s cameras since the Hero 6 line, and despite issues in the past, here it seems to produce results with little issue. The camera did freeze up a couple of times early on in the testing process but such instabilities seem to have ironed out as it’s been used more and the company has pushed out software updates.

You may also encounter the odd UI malady or touch input mishap when interacting with the Max’s 1.7in LCD, but while not ideal, it’s more or less par for the course where GoPros UX is concerned.

When shooting in Hero Mode, you have the choice of four ‘digital lenses’ emulating different focal lengths from 27mm (‘Narrow’) to an equivalent 13mm, with the newly-coined ‘Max SuperView’ field of view – the widest interpretation of SuperView ever on a GoPro. You’re essentially just capturing across a different crop on the sensor but the results are consistent across all these options, for the most part.

Being the Max, Go Pro has also instilled the camera with its most powerful (or aggressive, depending on how you look at it) image stabilisation ever, dubbed ‘Max Hypersmooth’, which paired with the Horizon Lock feature is an astoundingly powerful combination.

By the company’s own admission, not everyone likes their action footage to look as though it was captured using a steadycam, but if you want to keep content in-frame sharp and stable, there isn’t really anything else at the size of the Max with such a powerful interpretation of the technology.

To round out the video experience, you also have the choice to swap to Time Lapse or TimeWarp mode. Both allow for up to 1440p 4:3 capture using any of the camera’s four digital lens options. Time-Lapse is a conventional interval shooting mode where you can choose how often the Max captures a shot, TimeWarp, meanwhile gives you a speed ramp instead, along with an Auto mode that will choose the best playback speed based on the length of the recording time.

TimeWarp is essentially Time Lapse with the added benefit of GoPro stabilisation at play, meaning handheld time-lapses where you move the camera around during capture are wholly possible; the results are also very effective.

Audio is a huge part of the improved video capture process with the Max, upgrading the Fusion’s planar audio recording, to full 360 ‘ambisonic’ audio capture, which it achieves through a total of six microphones. This basically gives you full directional audio but the Max also has a talent for honing in on voices and cutting out background noise.

An improved wind-reduction algorithm also has to be commended. It’s not full-proof as when things really whip up it’ll start chopping into voice capture too, but it’s good – to the point that you might actually be able to rely on the in-camera audio if you’re using this to vlog and the like.

On the stills side, the cream of the Max’s crop has to be its PowerPano feature, which lets you snap a 6.2MP, 270-degree panorama with a single shutter press. Results are generally free of artefacts and, while lacking in dynamic range, are addictively easy to capture, without having to twist slowly from left to right – something those who shoot panoramas on a smartphone will be accustomed to.

Beyond PowerPano, the Max can take 16.6MP 360 photos or 5.5MP conventional stills, using either a 16mm ‘wide’ digital lens or the 13mm ‘Max SuperView’ lens.

Like PowerPano, dynamic range still gets called into question and depending on the environment, I found the colour science to struggle with accurate colour representation. Such shots are fine for social media but might struggle to suffice for any scenario more demanding.

There’s a 1600mAh battery inside the Max – you may notice that it’s larger than the 1220mAh battery that powers the Hero 8 Black and therefore isn’t cross-compatible with other GoPro cameras. If you’re not planning on charging it while it’s inside the Max, it also requires a separate fast-charger to the one that works with the 1220mAh cell used by the recent Hero cameras, which may be annoying if you’re already invested in GoPro’s wider ecosystem.

Depending on how you think of using 360 footage, this won’t be the only camera you shoot with. If it is, you’ll definitely need to carry at least one spare battery around with you, as a day’s shooting is beyond a single cell’s capabilities. I didn’t fork out an additional £30 for a second Max cell, so instead left the battery door open and had the camera hooked up to a power bank when I wasn’t shooting to keep it topped up.

In rethinking its efforts with 360 video, no area of the experience has changed more than the handling of footage. Unlike the Fusion, 360 video is stitched in-camera, taking a huge amount of hassle out of the equation and saving minutes, if not hours overall.

Previously, the user had to pull two microSD cards out of the Fusion, load the files into GoPro’s software and stitch them there – now, you can simply pull 360 video straight from the camera as a single file and work with it, stitched and ready to go, from both GoPro’s Android and iOS apps or its Mac/Windows desktop clients. 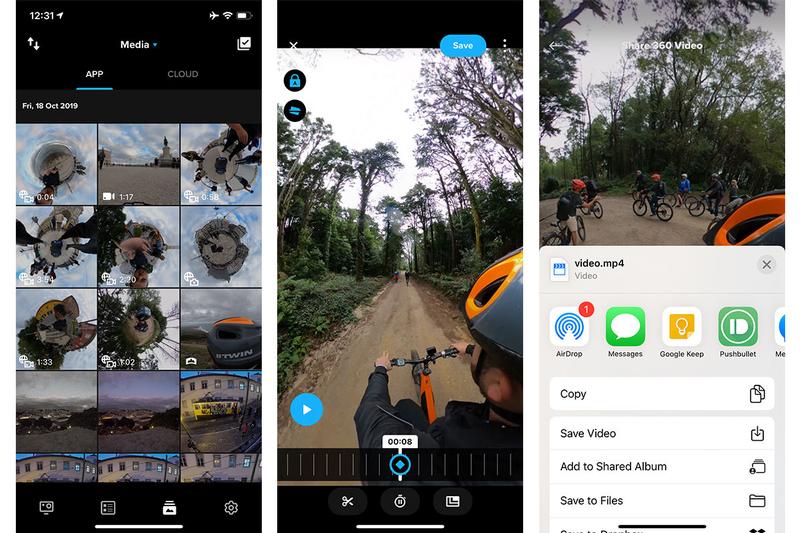 This might also be one of the few cases where editing on a mobile device is preferable to the desktop experience. GoPro has made working with 360-degree video and absolute breeze. The app lets you control the Max remotely and change settings on the fly, as well as choosing which media to import OTA (over-the-air).

Once footage is in-app, the phone’s gyroscope and touch controls, paired with keyframe selection, make it incredibly easy to frame and reframe 360 footage in moments; including virtual camera movements and zooms, to produce an edit you’re happy with. You can trim footage, export stills from it and export it out to your camera roll and onto social media incredibly easily too.

GoPro’s also gone a step further, releasing 360 Max plugins for Adobe Premiere Pro and After Effects, for those who want to elevate their editing to even greater heights.

The GoPro Max clearly undoes the missteps of the GoPro Fusion, but it goes so much further than that. It’s an excellent, easy-to-use 360-degree camera to work with that doubles as a sort of ‘GoPro Hero Lite’; boasting action cam traits and talents that other 360 cameras, like the Insta360 One X, lack.

You may encounter the odd UI bug here and there, the dynamic range, low light performance and colour science could always be better, but if getting the shot takes precedence above all else, the Max is a great choice.

The variety of shooting modes and options is appreciated, but the efforts put into the company’s mobile apps and the editing workflow, where the Max’s 360-degree footage is concerned, are really worth applauding.

The camera is just one half of the bigger picture here, but if you want to make more unique content and bring a new perspective to your videos, the GoPro Max might be the missing piece of such a puzzle.