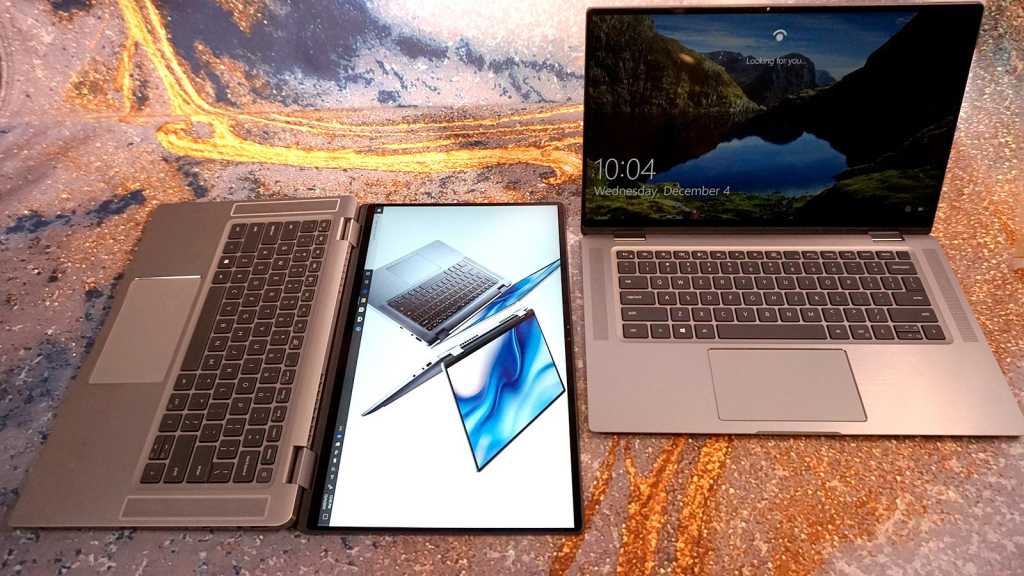 The Latitude 9510 looks good and promises beastly performance in a lightweight form. You get 5G connectivity, Wi-Fi 6, AI-support, and a gorgeous 15in display cleverly squeezed into a 14in chassis. There’s a lot to like, though we anticipate a high asking price for the privilege of owning such a versatile machine.

Dell has added a new ultra premium 9000 series to its Latitude range and we had the chance to get up close and personal when the products were showcased at a sneak preview event in New York, in December 2019.

The 9000 series kicks off with the Latitude 9510 laptop, which is also available as a 2-in-1. The range offers super suave features like 5G connectivity and AI-supported performance, with the clear aim of appealing to top-level executives.

While we can’t go into benchmarks and performance just yet, we can dive into the specs and give you a taste of what to expect in terms of look and feel (we loved it, if you’re keen to know).

Pricing is yet to be confirmed but we anticipate RRPs in the mid £2000 to £3000 range. The 7000 series, which was previously at the top of the Latitude hierarchy, boasts pricing in the £2000 range, so we expect the 9000 to push slightly higher.

Expect availability on 26 March, 2020 for both the standard laptop and the 2-in-1 variants.

As far as first impressions are concerned, the Latitude 9510 devices are undoubtedly beautiful. The large display shines thanks to minimal bezels, making it compact enough to fit a 15in “InfinityEdge” screen within a 14in body. The brushed aluminum chassis only reiterates the premium feel of the product.

The backlit keyboard is spaced comfortably and types silently, with minimal travel, while a large trackpad also features.

In top configurations, you can also get a fingerprint scanner integrated into the power button – a security feature available in conjunction with facial unlocking.

Both the 9510 laptop and 2-in-1 are impressively light, considering display size, weighing just 3.2lbs. In addition, Dell has ensured that they’re ergonomically pleasing to use, with a design that allows for easy one-handed opening.

In terms of ports, there isn’t much the Latitude 9510 leaves unattended: you get a one USB 3.1 USB-A, 2x USB-C Thunderbolt 3 ports with Power Delivery and DisplayPort compatibility, 1 x HDMI 2.0, 1 x USIM card tray, an audio jack and a memory card reader. You should also be able to configure models with a Contacted SmartCard reader and/or the fingerprint scanner in the power button, as mentioned.

On the inside, Dell has introduced a carbon-bladed fan for better, quieter cooling – though we’ll have to test this out for ourselves when the time comes.

What’s most interesting about the 9510 is that it will support 5G connectivity, thanks to an integrated Qualcomm Snapdragon X55 Global 5G modem. The Latitude isn’t the first laptop to consider 5G support, however. Lenovo flirted with 5G in its ‘Project Limitless’ concept laptop shown at the Computex event, held in May 2019.

The ultra-premium Latitude 9510 will also support 4G eSIM connectivity, allowing the device to lock into global networks if you’re traveling. There’s also Wi-Fi 6 support, expected to be exponentially faster than Wi-Fi 5. All this connectivity only cements the 9510’s intention to appeal to business professionals who travel often. You should also be able to add your own SIM if you don’t want to rely on the eSIM.

Of course, Dell’s push for premium features doesn’t end there, with AI thrown into the mix too – one that adapts how the laptop operates based on how the machine is utilised. For instance, the Latitude 9510 can track how applications are used so that the most common programs are optimised to deliver smoother performance.

It can also learn how and when you charge your laptop. If it spots that you’re always unplugged, the ExpressCharge Boost should add 35% in 15 minutes, while the standard ExpressCharge should add 80% in an hour.

You’ll also find the ExpressSign-In feature in the 9500 series, which is also found on the 7000 series, formerly Dell’s most-premium range. ExpressSign-In uses a combination of facial recognition and an infrared camera to detect when you approach the machine. This automatically unlocks and logs you in before you sit down to work and will also lock the laptop when you leave.

While our official benchmarks and day-to-day performance review will have to wait until we receive a model for testing, the Latitude 9510’s specs foreshadow a mobile machine geared for high performance.

Under the hood, you should be able to configure the 9510 with an Intel Core i7 vPro Comet Lake processor and up to 1TB of SSD storage, paired with 16GB RAM. The Latitude should also accommodate 30 hours of battery life, which Dell claims is the highest for any 15in business laptop.

From what we’ve seen of the Latitude 9510 laptop, we are without a doubt impressed. It looks good and promises beastly performance for such a lightweight form.

We anticipate that these premium features will come at a high price, especially if you’re after all the trimmings. As mentioned, we wouldn’t be surprised to see the RRP exceed the £2,500 threshold, given that the former top-tier Latitude 7000 series offer RRPs in the £2000 price bracket.

5G connectivity is perhaps what’s most promising about the devices, though lack of 5G infrastructure in some regions could make this feature unnecessary for some. Thankfully, the Latitude 9510 promises a whole host of other features that should make it an ideal work companion – we can hope, at least until we get our hands on a model.