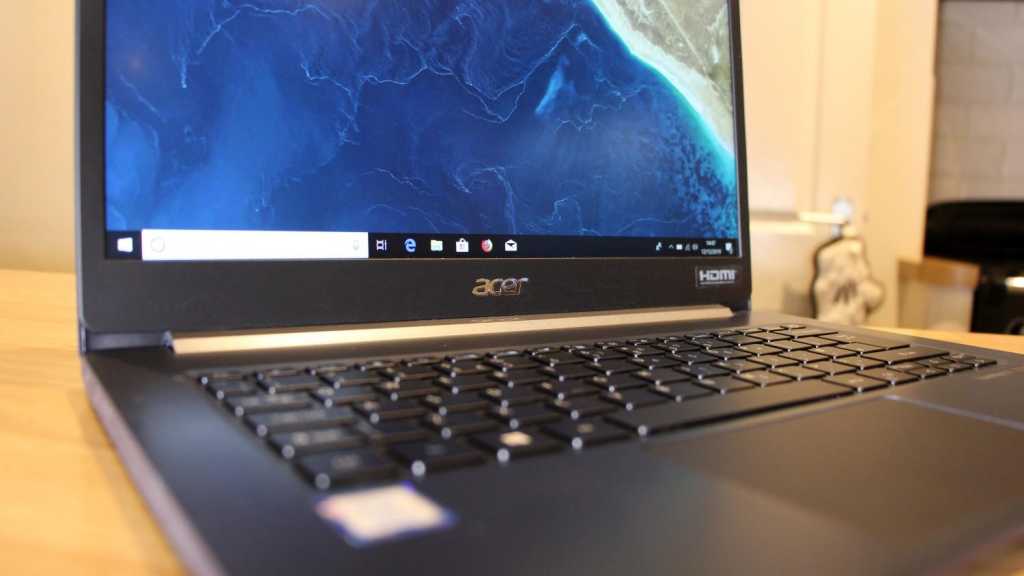 Acer’s machine is slim, light and strong enough to be tossed into a bag without making a dent – and it has decent ergonomics and performance too. However, rival machines are stronger, with better screens, and often have superior battery life and CPU speed – so it’s not the top all-round option.

The Acer TravelMate X5 is a business laptop that has two main missions: to be extremely slim and light and to provide an impressive amount of computing power.

It’s got the design to handle it on the outside and it’s got the silicon on the inside to get the job done – but it faces stiff competition from several key office rivals.

The more expensive £1,199 model retains much of the same specification but doubles the memory allocation. There’s also a £999 machine that keeps the 8GB of memory and 512GB SSD but drops the CPU down to a Core i5 model.

In the US, this machine is called the Swift 5. Search for part number ‘NX.H7HAA.002’ and you’ll find a $1,079 laptop with the same specification and dimensions as the notebook reviewed here.

Acer’s machine weighs just 980g. That sub-1kg figure is impressive, and it immediately undercuts rivals. The MacBook Air, for instance, is a 1.25kg machine, and the 13in Microsoft Surface Laptop 3 tips the scales at 1.3kg. The Acer is slim, too – the TravelMate’s 15mm body is just as svelte as any competitor.

This light design doesn’t cost any more than rivals either. The MacBook Air starts at £1,099, and the Surface starts at £899 for the Alcantara fabric model and £1,139 for a metal version.

It’s one of the slimmest and lightest laptops around, which means that it’s easy to sling the TravelMate into a bag and barely notice its presence. If you want to travel as light as possible, that’s great.

The light design does translate to inconsistent build quality, with a reasonably sturdy base but a lid that moves a little too much. The TravelMate is still strong enough to be slung into a bag without concern, but the MacBook Air and Microsoft Surface are both noticeably stronger.

The TravelMate X5 stuns with its svelte dimensions, but elsewhere it veers between odd and ordinary.

Take the port selection. There’s a headphone jack on the left-hand edge, but the rest of the ports are on the right-hand side – there’s a USB-C port that supports charging and DisplayPort, two full-size USB connectors and an HDMI output.

That’s a reasonable selection, but it does make the port placement awkward if you’re using a USB mouse. There’s also no card reader or Thunderbolt connection.

Still, it’s arguably better than rivals: the MacBook Air only has two Thunderbolt 3/USB-C ports, while the Surface Laptop only has one full-size USB port alongside a USB-C connection.

This isn’t the best-looking machine. The TravelMate may be made from magnesium alloy, but it’s plain: the metal is dark, with no patterns and no extra touches like bevelled edges or shining, smart hinges. There’s also no IR webcam – this machine only has 720p unit.

There are no surprises when it comes to the TravelMate’s typing gear: the Acer has a chiclet keyboard with no numberpad, just like both rivals.

The keyboard is fine – good enough for handling mainstream work. The buttons are consistent, comfortable and quiet, with a clear font and a white backlight. There’s not much travel, though – in this respect, the shallow buttons are similar to the MacBook Air’s typing gear.

They’re not perfect, though. They’re a bit too small – disappointing given the amount of spare space on the chassis. The white backlight doesn’t have brightness adjustment. The power button sits at the top-right, which is awkward.

This is an area where the Microsoft Surface is better. Its keys have a tad more travel, and the buttons are bigger too.
We have no concerns about the Acer’s trackpad, meanwhile: it’s large and response, with two snappy, fast buttons. A fingerprint reader is also installed below the keyboard.

The Acer’s 14in panel has a Full HD 1920 x 1080 resolution, which is enough for mainstream work applications and web-browsing alongside basic photo-editing

Quality levels are fine, but not outstanding. The contrast level of 1,159:1 is decent – high enough to provide solid punch and clarity in everyday situations. The brightness level of 313cd/m2 is reasonable, and high enough for indoor use. However, it’s not really good enough for outdoor use.

The colours are middling, too. The average Delta E of 2.45 is merely fine, and the colour temperature of 7,642K is too cool – so the whole panel looks chilly and washed out. The sRGB coverage ratio of 92.9% is reasonable, but the Acer can’t handle the DCI-P3 or Adobe RGB gamuts – it only rendered around 65% of those colour spaces.

None of these issues are ruinous, but they do mean that the Acer’s panel is only suitable for mainstream productivity applications and entry-level photo-editing rather than anything where colour accuracy is crucial.

Both Apple and Microsoft’s machines have sharper, brighter screens with better colours, and the Surface Laptop also has touch functionality.

The Acer’s speakers are noticeably worse, too: weedy, with a muddy, indistinct mid-range. They’re barely good enough for casual music and YouTube videos.

Acer’s machine still relies on an Intel 8th-gen processor. It’s not a surprise to see a lot of laptops using this older tech, because 9th-gen chips barely delivered a speed boost and 10th-gen CPUs have only just arrived.

This model of TravelMate uses the Core i7-8565U, and cheaper variants use the Core i5-8265U. The Core i7 part is a quad-core chip that supports eight threads, and it has base and boost speeds of 1.8GHz and 4.6GHz.

It’s the same pair of chips used in MacBook Air models, but it lags behind the Surface – one of a handful of laptops with Intel 10th-gen hardware. The Surface is available with new Core i5-1035G7 or Core i7-1065G7 CPUs.

The TravelMate’s specification is rounded out by 8GB of memory, Intel’s integrated graphics and a 512GB SSD that uses Acer’s ProShield software to cleverly encrypt drives and files and shred sensitive data.

This Core i7-based specification delivered Geekbench results of 4,744 and 11,192 points. Those scores are fine, and around 700 and 3,500 points ahead of the Core i5 version. The Core i7 delivers a solid leap over the Core i5 in Cinebench R20, too – the Acer’s score of 1,209 points is nearly twice as quick.

It’s good speed – enough to handle web-browsing and browser-based apps, Office tools and mainstream photo-editing applications. There’s enough grunt here to run all of those apps at once, too, which isn’t really possible on the Core i5 chip.
It’s good pace, but there’s a huge gulf between these older 8th-Gen parts and the new 10th-Gen chips.

The Acer doesn’t have huge gaming power, either: this machine’s Sky Diver result of 3,391 is half as good as the Surface, which has a new integrated Intel core.

The TravelMate X5 is not slow – it’s easily got enough speed to tackle mainstream work tasks, from Office apps and browser-based tools to photo-editing software. However, bear in mind that newer 10th-gen CPUs are far faster – so the Microsoft Surface laptop is a better bet for pure performance.

The TravelMate isn’t entirely quiet, either; during tougher benchmarks we detected subtle fan noise. Don’t buy this machine if you want a silent notebook.

Connectivity is another area where the TravelMate is middling. This machine has no Gigabit Ethernet and no USB adapter in the box. There’s dual-band 802.11ac but no future-proofed 802.11ax and there are no LTE models if you want internet without connecting to Wi-Fi.

The Acer’s two-cell battery delivered reasonable longevity. In our video loop test (720p at 120cd/m2) the TravelMate lasted for 10 hours and 43 minutes – about two and a half hours short of the MacBook Air, and an hour longer than the Surface 3.

In an everyday work benchmark with the screen at half brightness the Acer lasted for seven hours and 44 minutes.

They’re decent results, and they mean that you’ll probably get through a day of work with this laptop – although you may not make it through the commute if you push the components. The Apple laptop also remains the better option for battery life.

The Acer is one of the lightest laptops available, and it still offers ample power for day-to-day work. If you need solid CPU power in a machine that’s lighter than anything else then the Acer is a top option.

The TravelMate X5 also serves up a reasonable keyboard, a solid selection of ports and enough battery life to get through a day.

However, the competitive price and light design means the laptop falters elsewhere. Its heavier rivals are sturdier and smarter, and both have superior screens. The MacBook Air offers longer battery life, while the Surface provides better performance.

The Acer TravelMate X5 is the best option around if you need a laptop where slim, light design is a key consideration – but the strength of competitors mean that it’s not the best all-round work option.