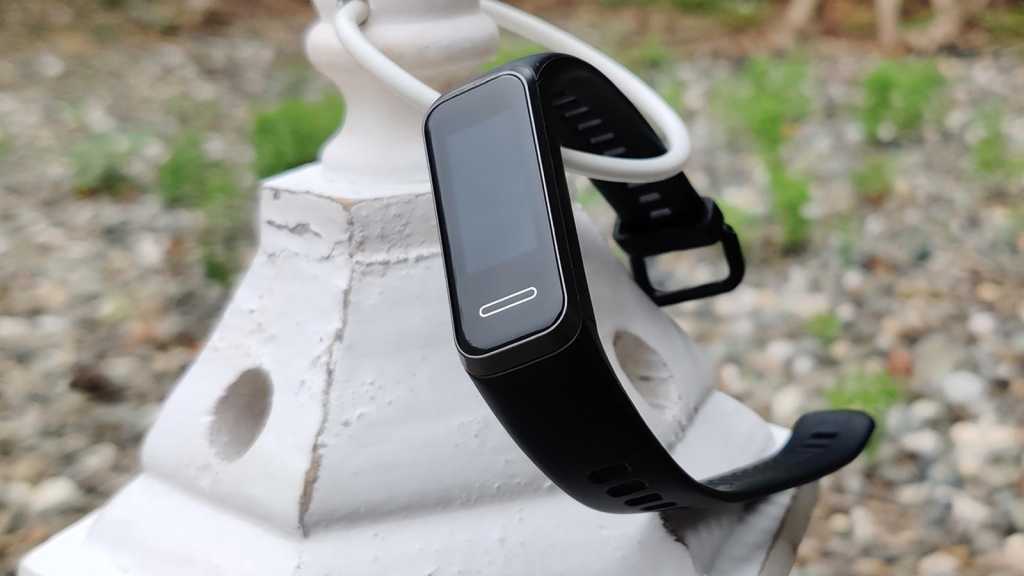 The Huawei Band 4 is one of the best cheap fitness trackers you can buy. It will track your steps, sleep and heart rate and with connected GPS will suffice for casual runners. The battery life is also excellent but it’s odd that it doesn’t have a swim tracking function despite being 50m water resistant. The party piece here is not needing a charger as the Band has a USB stick built in – a design flourish that we love and makes it stand out.

Right up front, one of the best things about the Huawei Band 4 is that it doesn’t come with a charging cable or cradle like every other fitness tracker. Instead, one half of the strap comes off to reveal the male end of a USB-A connection, meaning you simply plug the Band into any USB port to charge it.

Most fitness bands and smartwatches not only come with a cable but also a proprietary charger connection that means you’ll run out of charge if you lose or forget the accessory. Not so with the Band 4. It’s a small detail that makes me wonder why other companies don’t do the same.

Thankfully the rest of the Huawei Band 4 is just as good, and rivals the Xiaomi Mi Band 4 as the best cheap activity tracker of 2019. It has outstanding week-long battery life, a colour touchscreen and a full range of activity and sleep tracking built in.

The Huawei Band 4 is available from Argos and Amazon in the UK for £34.99, the same price as the Xiaomi Mi Band 4.

This price is far better than the cheapest comparable Fitbit, the £89 Inspire HR. For under half the price the Huawei Band 4 gives you all the same features plus a colour screen and better battery life. 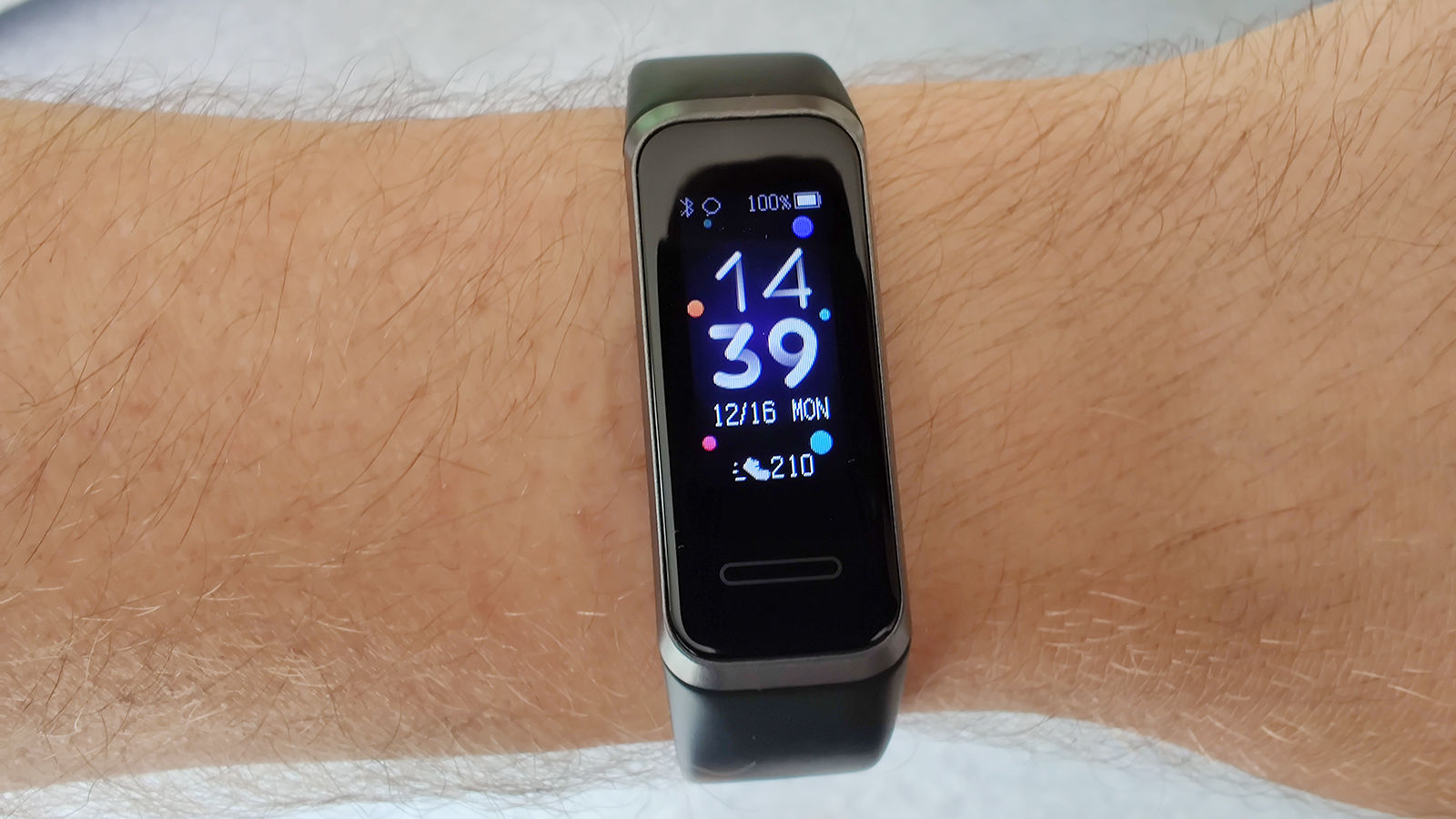 The Band 4 is as simple as fitness trackers come, and that’s a good thing. In a slim 24g design it packs in a dinky 0.96in colour display which is a little pixelated but great for the price, though difficult to read in direct sunlight. Just below the screen is a capacitive touch button that wakes the screen and acts as a back button for menus.

I reviewed the black strap model, but there are amber sunrise and sakura pink options too. It’s nice to see a proper buckle on the strap as well.

Buttons on the underside quickly release either half, with one revealing the clever USB charging connection that is otherwise completely hidden during use. The tracker itself is ever so slightly curved on the bottom to hug your wrist and has the slightest of bumps to house the heart rate sensor.

I found it very comfortable to wear all day for over a week. It’s water resistant to 50m so I wore it in the shower, and it’s slim enough to not notice when asleep – keep it on and it’ll roughly track your slumbers, too. 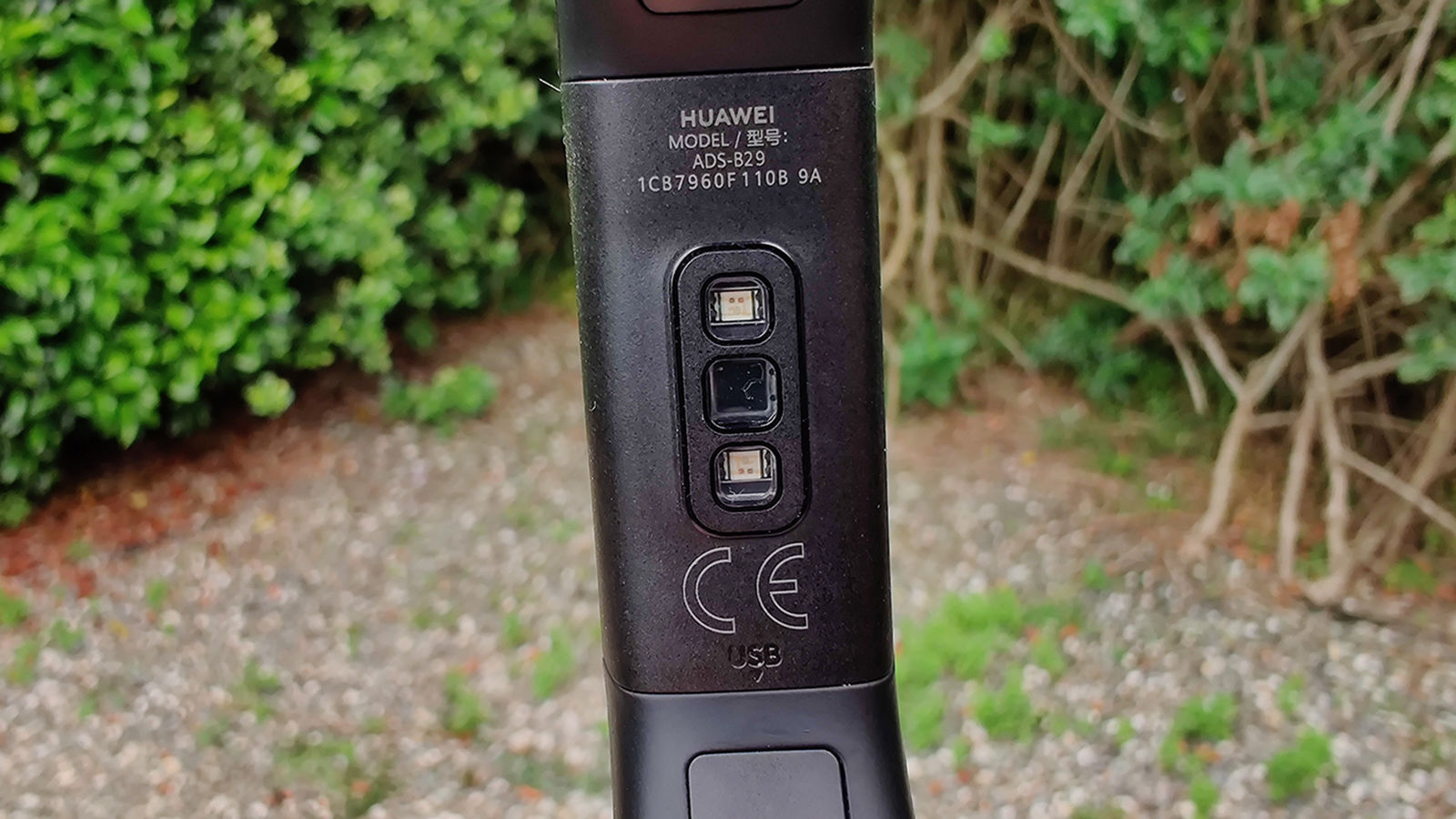 It’s not an exciting product by any means and the black version is pretty drab. But I think it looks better than the Fitbit Inspire line and it is more durable in its construction. Plus it’s difficult to make such a small band anything more than functional.

The Band 4 has a sibling in the Honor Band 5 (Honor is a sub-brand of Huawei) and both products are very similar. Although the Huawei Band 4 costs £5 more and has the exact same functionality, we prefer it as it doesn’t require a charging cable.

The two designs are a little different too, and you might prefer one. But the functionality of both similar bands is the same, apart from the odd fact the Huawei doesn’t have a swim tracking function, but the Honor does. They both run on Huawei’s Lite OS wearable software that it miniaturises for this form factor. 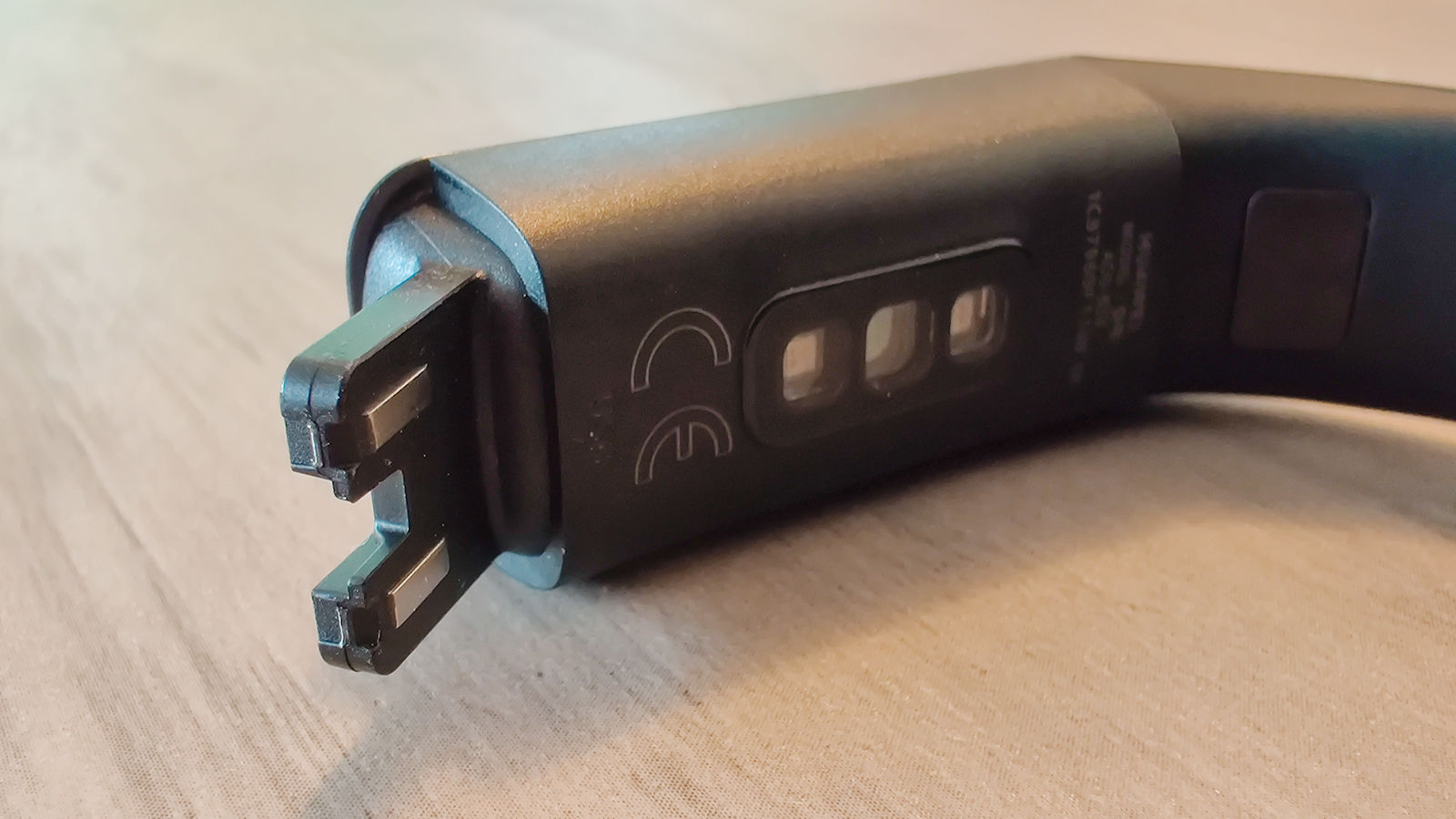 Function above its form

The Huawei Band 4 is as simple a fitness tracker can be with a screen but it overperforms when it comes to its features. It lacks built in GPS (as do most trackers this size and price) so you need to take your phone with you on runs and cycles to track your route, but otherwise it had everything every casual fitness user will want.

It counts steps, distance, calories and heart rate and you can set the latter to automatic or manual at the cost of battery life. But even with auto heart rate on and raise to wake the screen enabled (it’s off by default) I easily got a whole week of constant wear out of the Band 4.

I used the Band 4 to track runs and workouts at the gym and found it to be quite accurate. It has workout modes for indoor and outdoor runs, walks and cycles, as well as cross trainers and rowing machines. I used it mostly on free training mode for weights and it logged my heart rate and gave me a read out of the intensity according to the Huawei Health app. I resent that it looks like I should have worked harder, I was knackered. 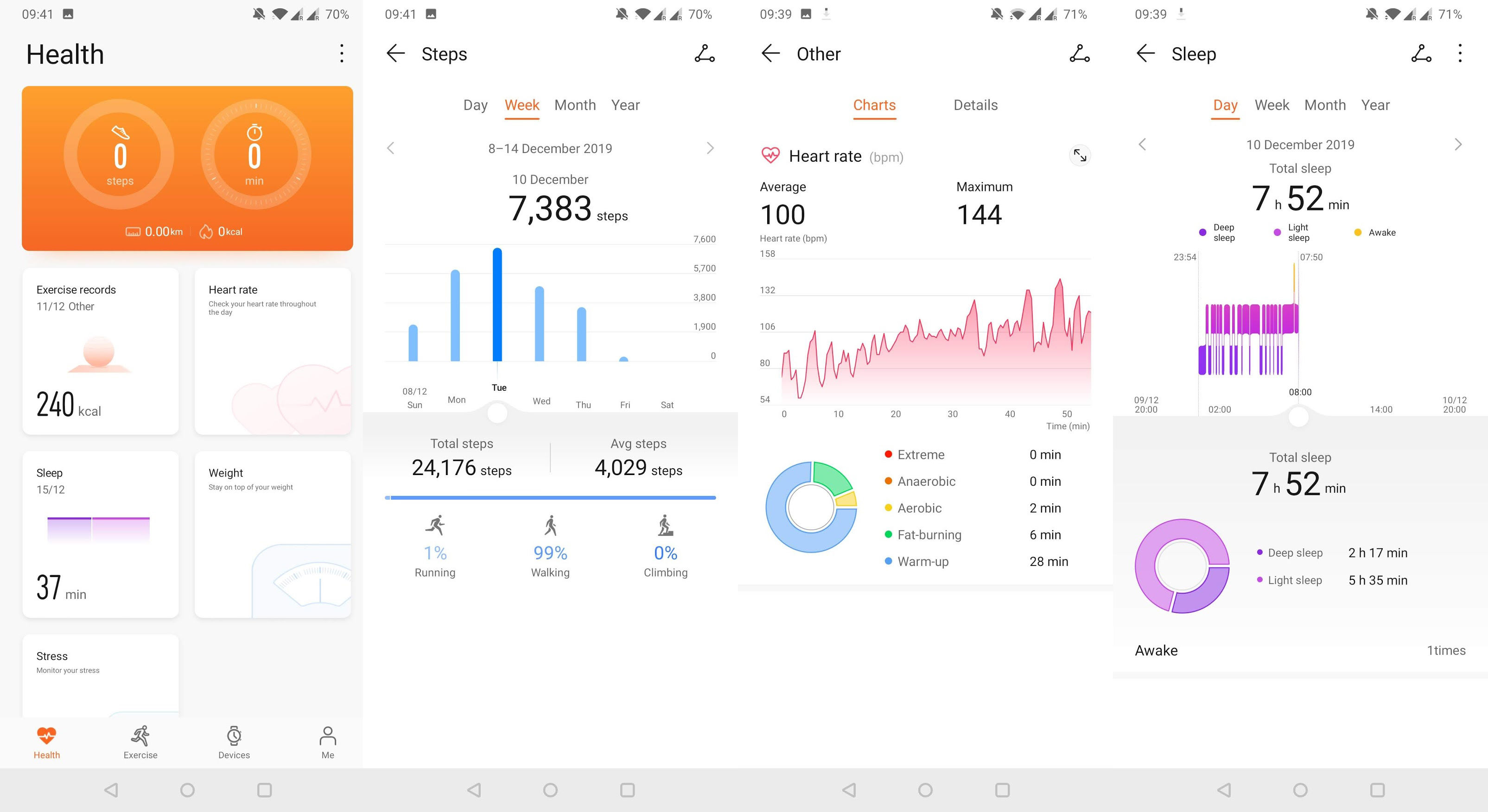 The Huawei Health app is unfortunately more fully featured on Huawei phones – in my testing I could only access the watch face store when I paired the Band with my Huawei phone. On a OnePlus 6T, the option did not appear in the app.

Huawei Health is a pleasingly simple app and once you’ve got used to a few of the quirks involved when trying to surface your fitness information and it is better suited to more casual health tracking. That said, on iPhone you can link Huawei Health to Apple’s Health app and have the two platforms working in harmony. 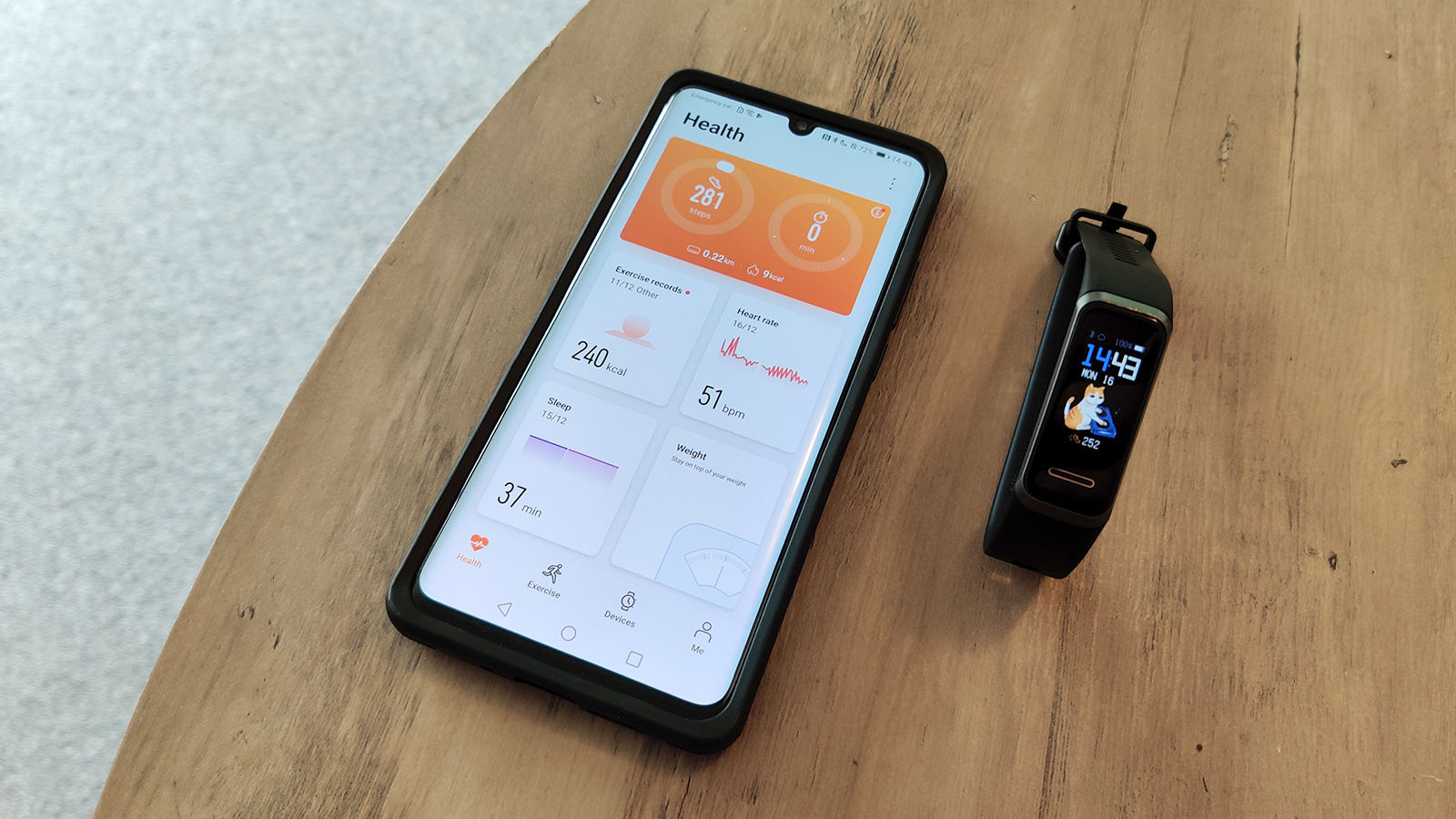 I tested the Band 4 with an iPhone to check this out, and the Huawei Health app looks quite different but has the same functionality as on Android – but again you can’t download new watch faces, and the thing only comes with three installed. That’s a shame when the retail box advertises ‘creative watch faces’ but it turns out it’s device and region dependent.

The watch face I downloaded of a cat DJing via a Huawei phone doesn’t exactly make the Band better. It is funny though.

The three best things about the Huawei Band 4 are its battery life, built in charging port and the fact you can wear it and forget about it. If you don’t want a fully featured smartwatch with all the bells and whistles then the Band 4 is all you need at an astonishingly good price.

Yet the Xiaomi Mi Band 4 and very similar Honor Band 5 are better options at the same price or less as they can both track swims, something oddly absent from the Band 4. If that matters to you, you won’t care that you’re missing on the Band 4’s neat built-in USB charger. 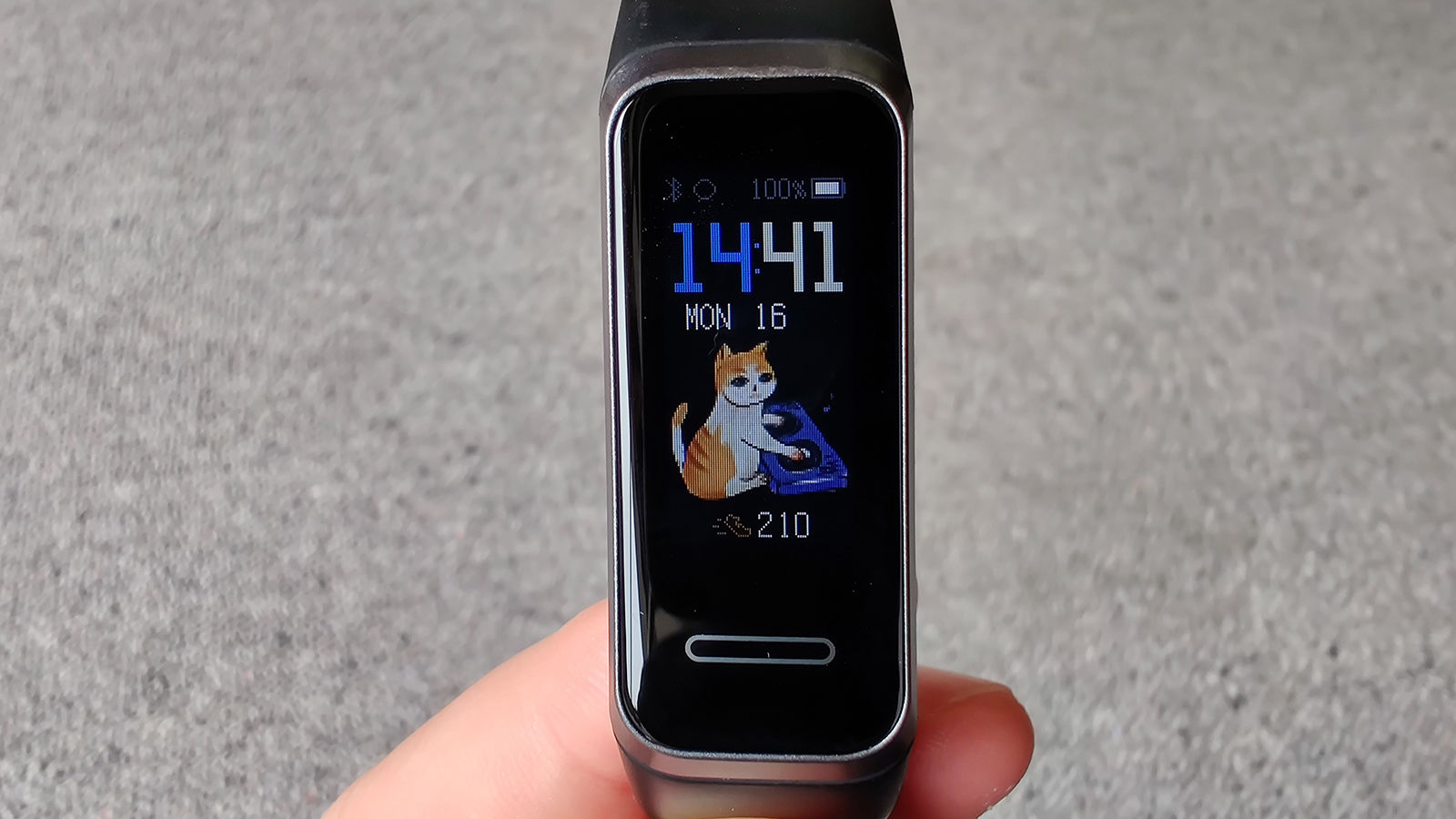