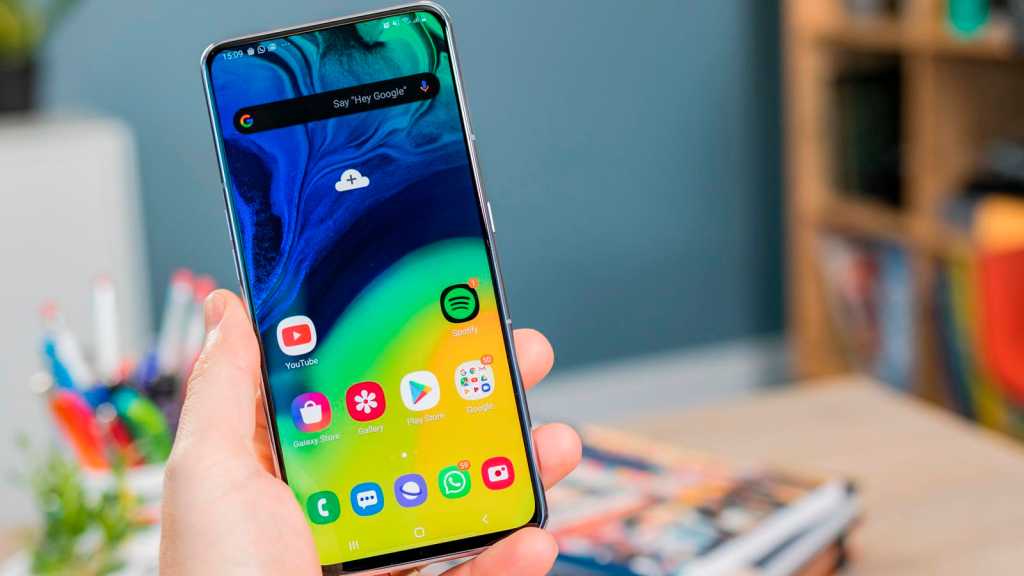 While the A80 is a very likeable and premium looking phone, though it’s a mid-range handset. The rotating camera is a clever way to maximize the gorgeous display which is one of its strongest features, making it an ideal companion for those who often watch videos and films on their phones.

The Galaxy A80 bundles a premium look with mid-range performance and price. It’s a phone that markedly caters to the social media generation, and most notably, you get a reversible triple camera that switches from rear-facing to front-facing. Beyond the novelty of the flip-cam, however, the A80’s strength lies in its gorgeous, edge-to-edge, notchless display.

The Galaxy A80 retails at £579/US$549 and is available in Silver, Black and Gold. Right now, when bought SIM-free, the phone is eligible for £100 in cashback from Samsung.

Our review sample comes from Carphone Warehouse, where it’s also available SIM-free with the cashback offer, or for free upfront with select plans if you prefer to be on a contract.

You can of course buy the A80 directly from Samsung. Other retailers carrying the Galaxy A80 include Amazon, Argos, John Lewis, Selfridges and Currys PC World.

As far as first impressions count, the A80 is undeniably a striking phone that will tempt you to flaunt it to friends. The silver model we reviewed features a sleek and smooth curved Gorilla Glass 6 back – though this looks closer to a pearly white than silver – and an all-metal frame that curves seamlessly into the slick Gorilla Glass 3 front panel. The 6.7in screen boasts a 85.8% screen-to-body ratio allowing an immersive all-display experience.

With so much glass, it’s no wonder the 220g phone feels weighty when you first pick it up – but it’s something you get used to very quickly; the weight also adds to the premium feel because you’re reminded you’re not holding something cheap and flimsy. Its general smoothness does make the A80 prone to smudges and fingerprints however, though this is more visible on the back than front.

The A80 would benefit from a case. Collateral to being so incredibly smooth, it’s also quite slippery – and with a measurement of 165.2mm across, you may struggle to use it with one hand.

Though a mid-range phone, you do get an always on display (don’t worry, you can turn it off) and an in-display fingerprint scanner – a feature found in the premium flagship Galaxy S10. The scanner was somewhat fiddly in our experience and we often had to resort to entering the PIN to unlock the phone. You may need to play around with the angle you place your thumb to get through.

We also appreciated Samsung’s nod to making the user experience seamless; the A80 detects when you pick it up and lights up the lock screen, saving you the trouble from having to press the power button. It’s a small but welcome attention to detail.

The A80 isn’t waterproof though, but the more expensive OnePlus 7T Pro (£699) – one of the best phones on the market – isn’t either.

Taking the cameras for a spin

Of course, we would be remiss if we didn’t address the A80’s crowning glory: the rotating triple camera which includes a 48Mp main camera, 8Mp wide angle and a 3D camera.

Sure, it may seem gimmicky at first glance, and in practice may even take a second longer to switch to selfie mode, but really it’s quite clever. Not only does it maximize the screen space but it lets you access the full 48Mp main camera for selfies and the 8Mp wide angle if you want to capture a group selfie or a broader background.

Plus, show your palm in selfie mode and the A80 will set off a timer – another feature that makes the user experience just a little more seamless.

What’s especially useful about having access to the 48Mp camera in selfie-mode is a better quality video. It’s a great feature for live streamers and social media natives who record themselves often, even more so because you can record in 4K Ultra HD (3840 x 2160) at 30fps; but even if you don’t aspire to be a viral TikTok superstar, it’s still an excellent feature for video calls. As someone who often video chats on Whatsapp with her overseas parents, the verdict was clear – much like the image quality – the flip cam wins.

Though the A80 is intended for the social media generation the photo quality itself isn’t particularly breathtaking. It’s great if you want to take pictures with reckless abandon – something the 128GB internal storage will readily accommodate. Yet the dynamic range in the photos vary dramatically based on lighting conditions, and pictures tend to have a soft focus.

You might get lucky in the right conditions however. In bright lighting, images look vivid and colours look sharp – which might be the lighting conditions you would work with anyway if you’re often snapping careful shots of your Sunday brunch or latte.

The A80 does well in night mode if you’re patient. You will need to hold the phone still for several seconds while it does its thing. The final image is bright though blurry in certain parts – objects in motion will definitely blur, but this is common.

There are fun video features that social media users might appreciate though, like hyperlapse and slow motion. There’s also the Live Focus option, enabled by the 3D Depth Camera which lets you control the intensity of the bokeh effect (blurring the background). The final results weren’t incredibly impressive as the effect looked artificially rendered.

Camera aside, the screen by far made the greatest impression. It’s completely notchless which makes it a pleasure to use when watching content. You get a wonderful Full HD+ screen at 1080 x 2400 pixels and a tall 20:9 aspect ratio – ideal for films. The A80 feels like a phone that’s meant to be held and looked at.

You have the option to control the level of the blue light filter and schedule it for set hours. You can also play with the Screen Mode feature to adjust how saturated colours appear (choose from Vivid or Natural). If you prefer even more control, you can manually adjust the RGB settings too. Indeed, the display is the A80’s strongest feature.

You won’t find a headphone jack on the A80. As a phone distinctly intended for millennials, this makes sense as most will use Bluetooth-enabled headphones anyway. Still, it’s a shame if you have a pair of much loved wired cans.

If you’re listening without headphones, you do get a single speaker – but don’t expect a very rich sound.

The A80 charges via USB-C and supports Wi-Fi Direct and hotspotting.

Under the hood, the A80 comes with 8GB RAM and 128GB internal storage – an impressive amount for a phone under £600.

The A80 also offers a mid-range Snapdragon 730 chip, which falls right behind the premium 800-series in performance but at a lower price. This places the A80 in the company of other robust mid-range phones like the Xiaomi Mi 9T, Oppo A9 2020 and Oppo Reno 2.

In our benchmark tests, the A80 outperformed both the A9 2020 but trailed closely behind the Mi 9T and Reno 2. Its performance scores across gaming tests were in the same range among the three phones.

What it does show is that Samsung is facing incredible competition from Chinese manufacturers. It’s not enough for a phone to be good at a mid-range price, when you can get a phone that’s great at an almost budget price like the Xiaomi Mi 9.

The A80 is equipped with an Android 9.0 and Samsung One UI, which is intended to make the user experience less cluttered and more natural. Plus you get the Samsung’s personal assistant Bixby which automatically curates all the information most valuable to you: schedules, reminders, recent photos, top visited sites, Spotify.

One UI lets you turn on the sleek dark mode too, which is great if you’re a night owl. While my experience with the A80 was generally seamless switching between apps and watching videos, it did stumble when uploading videos to Instagram, causing the app to crash twice.

The A80 offers a 3700mAh battery. I used the phone mainly to browse social media, watch YouTube and Netflix and stream music, and the A80 delivered sufficient juice to carry me through the day. Of course, throw gaming into the mix and it might demand more of the battery.

Typically, I would come home to around 20-30% of battery left. In our Geekbench 4 battery test, the A80 delivered 8 hours and 22 minutes of usage, though charged very quickly with a fast charger (it comes with a whopping 25W adapter) which rejuvenated a dead battery to 54% within 30 minutes while powered off (and to 30% within 15 minutes). Not bad at all.

The A80 is a very likeable and premium looking phone, though it’s a mid-range handset. The rotating camera is a clever way to maximize the gorgeous display which is one of its strongest features, making it an ideal companion for those who often watch videos and films on their phones.

The picture quality looks vivid and crisp, making it particularly enjoyable when streaming content on Netflix or watching videos on YouTube. In terms of camera, while the rotating set-up gives you access to a 48Mp main camera for selfies, the general detail and dynamic range of the images are mediocre.

Apart from this small fault, it is easy to recommend on the basis of its own strengths, but the price is still higher than phones with similar specs and performance from Chinese brands at much lower prices – so shop around if your heart isn’t set on a Galaxy phone.