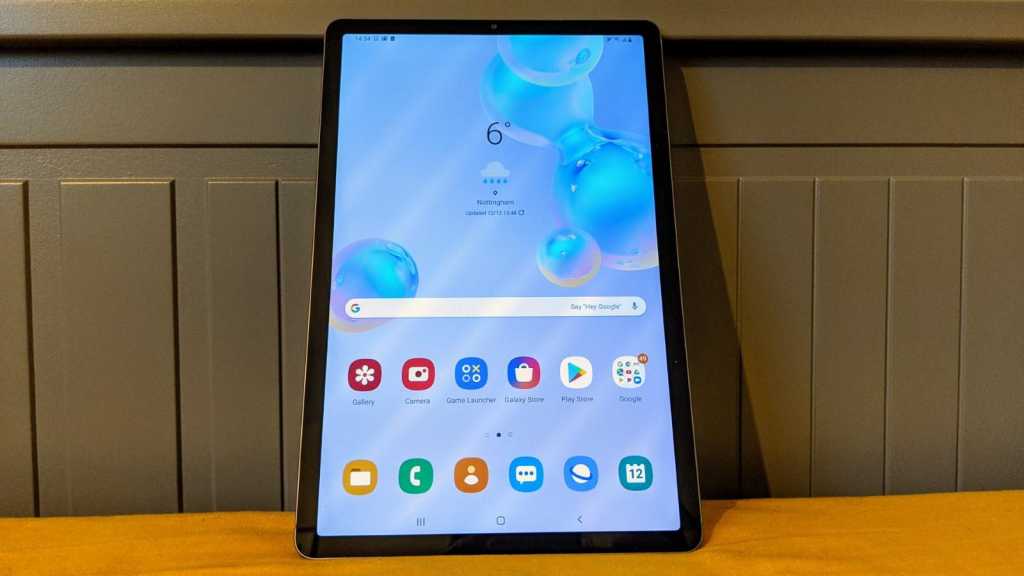 The Galaxy Tab S6 is arguably the best Android tablet ever made with a sleek design, powerful internals and handy features. However, it’s pretty pricey as an entertainment device and as a productivity workhorse there are better options elsewhere.

Another year, another flagship tablet. Well Samsung never released a full-blown Tab S5 but the Galaxy Tab S6 is here to take on the iPad and, well, the iPad.

We jest, even though there isn’t much competition in the tablet market these days, the Galaxy Tab S6 is pitched as a Surface Pro style productivity tablet with the attached keyboard and software that provides a similar experience to Windows.

If you need internet access on-the-go then the LTE model is £689/$729, but this time jumping to 256GB will cost you £70 more – go figure. The price includes the S Pen stylus but not other accessories which you might consider necessary. The Book Cover is £60 and the Keyboard Cover is £159.

It might be expensive, but it’s still cheaper than the cheapest iPad Pro which comes in at £769. The iPad Air with 256GB of storage is closer in price at £629.

Our review samples was provided by Carphone Warehouse. You can also buy the Tab S6 from Samsung, Amazon, Currys PC World, John Lewis and Argos.

Need something cheaper? Well you can opt for the Galaxy Tab S5e which is still excellent or the budget-friendly Galaxy Tab A 10.1. Check out our chart of the best tablets.

On the whole, not a lot has changed about the Tab S6 design when compared to the Tab S5e.

We’re really talking minor tweaks so you’re getting a sleek, thin and stylish tablet. Figures have gone up but only a touch at 5.7mm thin and 420g.

The metal casing comes in various colours – Cloud Blue, Rose Blush and Mountain Grey – and feels very premium. We’re glad Samsung moved on from the glass rear cover of the Tab S4 which just doesn’t make any practical sense for a tablet.

The major design feature is found on the back where there’s an indent to keep the S Pen stylus. It attaches with magnets like the iPad Pro (2018) but Apple chooses to stick it to the side instead of the back.

It sounds like a good idea and angles the tablet slightly towards you if you leave the stylus attached and place the Tab S6 on a flat surface. It also charges wirelessly while docked which is handy.

However, it only attaches if you have it in the correct position so if the Pen is the wrong way round then it’ll just fall off. Even in the right position, it’s easily knocked off when picking the tablet up – especially if you’re right handed – or putting it into a bag.

The other design change is more subtle as the side-mounted fingerprint scanner is gone. It’s now embedded into the screen like Samsung’s smartphones.

Four metal contacts on the side are for connecting the keyboard cover so you don’t need to faff around with Bluetooth. It’s called a Pogo pin connector.

Although many devices, particularly smartphones, are waterproof these days, the Tab S6 is not so you’ll be at risk if you want to watch BBC iPlayer in the bath. Another design element to think about is the lack of a headphone jack, limiting you to wireless headphones.

At over £600, it’s not much surprise that the Tab S6 comes packed with an excellent selection of hardware.

Despite being a fair bit more expensive than the Tab S5e, the display on the Tab S6 is the same.

It’s 10.5in in size, has a 2560×1600 resolution and SuperAMOLED technology. There’s really nothing to dislike here with a dazzlingly colourful and crisp image as we’ve come to expect from Samsung.

There’s plenty of brightness on offer when you need it, too, maxxing out at 436cd/m2. The screen-to-body ratio is still decent too giving a modern look but leaving enough space to hold the tablet without interfering with the display.

The 16:10 aspect ratio means you’ll get thin black bars above and below videos when you can crop in but it’s not a bit deal really and provides a bit more height when working on documents in landscape orientation.

As mentioned earlier, the screen now has a fingerprint scanner hidden within. It’s handy but not the fastest we’ve tried and can be a little awkward to use depending on how you’re holding the tablet.

To go with the brilliant screen are some awesome speakers. There are four with two at either end ‘by AKG’ – impressive considering how thin the slate is. They offer a powerful, balanced and immersive sound far better than most tablets and up there with the iPads models which also have four speakers.

The only issue, as we found with the S5e is that you might cover some of the grilles up with your hands when holding the tablet in landscape mode.

It might be the same display as its predecessor but the Tab S6 supports Samsung’s S Pen giving you a reason to spend the extra.

This stylus is much bigger than the one you get with the Galaxy Note 10 phones, hence it docking on the back rather than into a hole. It’s not the most comfortable we’ve used due to its width and looks a little odd with such a tiny tip.

Still, it works very well with the tablet and can be used for various things including drawing, handwriting, general navigation and a remote control (with the button) for apps like the camera or presentations.

The software is the same as the Note 10 so you get handy features like ‘smart select’ and ‘screen write’. Others are more gimmicky such as AR Doodle where you can draw on someone’s face and whatever you create will move around with them.

You can also use air gestures as if the S Pen was a wand. For example, you can switch between camera modes with a swipe or do a circular motion to zoom. It’s fun but we can’t imagine anyone will really use this regularly.

You might get the same screen at the cheaper S5e, but the Tab S6 comes with 128GB of storage and 6GB of RAM which is a decent upgrade. The 256GB model has more at 8GB. Either way, there’s a microSD card slot you can add up to 1TB more storage.

Samsung opts for the Qualcomm Snapdragon 855 processor which is flagship level vs the mid-range 670 model in the the S5e.

This makes sense when it comes to the price, but also the way the S6 is pitched more for productivity rather than an entertainment device. We’ve got no quibbles on the performance front as the device is silky smooth. PUBG on Extreme HDR is no problem.

You can see our benchmark results below where we’ve also included the Surface Go as a Windows comparison (we haven’t benchmarked the Surface Pro 7 yet).

The Tab S6 has the same 7040mAh battery found in its predecessor but Samsung claims an extra 30 minutes of battery life – we assume due to a different processor.

15 hours of video playback would be great but we didn’t quite get that length of time in the Geekbench 4 battery benchmark. Still, at 11 hours and 22 minutes it’s better than the S5e and one of the better results around going toe-to-toe with the iPads.

You’ll use the lone USB-C port for charging most likely, but that Pogo pin connector we mentioned earlier can also be used for charging if you get Samsung’s Pogo Charging Dock.

Samsung’s OneUI is the standard issue software on Galaxy devices now, based on Android 9 Pie here.

It’s decent but still not our favourite at Tech Advisor towers, though it might be yours and that’s your choice, of course. It’s not as refined as stock Android but it is much better than Samsung’s efforts of days gone past.

Let’s focus on the main features here, firstly the split view that allows you to use apps side-by-side with even a third one on top – without any performance issues.

DeX (short for desktop experience) is the headline feature and allows you to use the tablet as if it were running on Windows 10. It takes a few seconds to load but once you’re in you can run apps in windows and control the interface with a pointer – a Bluetooth mouse can be used if you don’t get the keyboard cover.

On the one hand it works well and it makes more sense on the Tab S6 with its powerful processor compared to the Tab S5e. However, the display feels small for this kind of use compared to a laptop and many apps work better back out in the regular Android mode.

Much of this productivity relies on the keyboard cover which also has a trackpad. We weren’t supplied with one but were surprised with how good previous ones have been. The problem is that it’s £159 and when you add this onto the cost of even the cheapest Tab S6, you can get a decent Windows 10 laptop instead which will do a much better job.

If you really want a tablet which can replace your laptop then the Tab S6 is one of the best options but it does come down to what kind of work you need to get done. We wouldn’t recommend it, really.

There’s no doubt that the Galaxy Tab S6 is an excellent tablet – arguably the best Android tablet you can buy in terms of hardware and features.

When you bring in the price, though, which is a lot more than the Tab S5e it’s not such a good deal. It’s predecessor is pretty similar and there are cheaper iPads out there, too.

Whether you should buy it largely comes down to whether you really think you’ll use it as a productivity device by taking advantage of the S Pen and DeX software. We’re not convinced though, and you’ll need to factor in the cost of the keyboard cover to take full advantage.

At this price, you’ll likely be better off with a Windows 10 laptop unless you really need a tablet instead. Still, an iPad Pro or Microsoft Surface is a superior option in the tablet market.

Otherwise, the Tab S6 is probably overkill compared to the Tab S5e which has the same screen, design and speakers and is perfectly good as an entertainment device and light work.