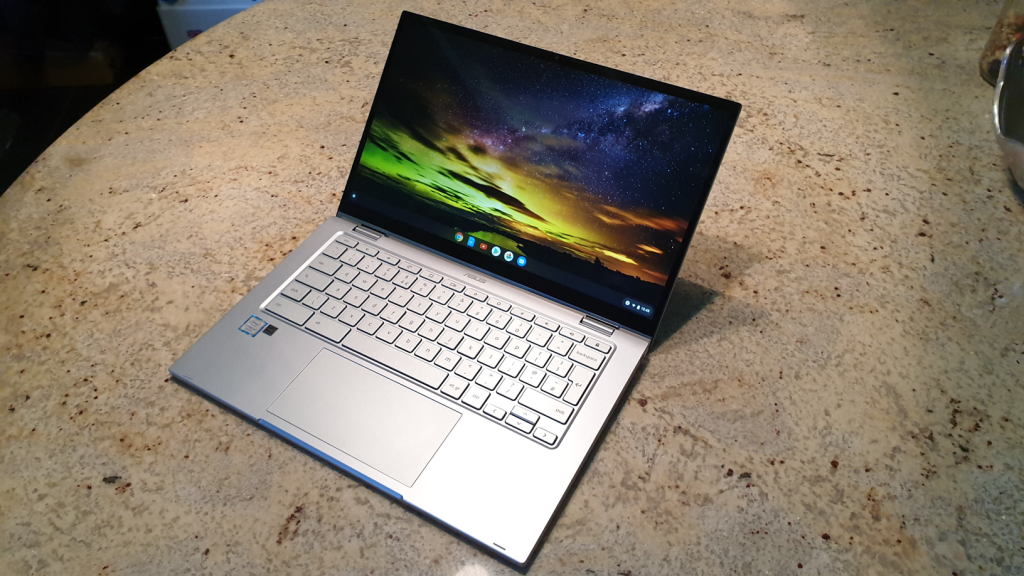 Asus has remained committed to Chromebooks for years and with the C433TA it seems to have distilled all that experience into an impressive laptop. The build quality is solid and stylish, while the power on offer makes everything smooth sailing no matter how many tabs are open. Gaming performance is the only issue, but it’s not really the market that Asus is aiming at. So, if you want a quality Chromebook that looks great, works well, and has huge battery life, this is the one.

Asus has updated its Chromebook lineup once again with the catchy C433TA, a model which boasts a 14in Nanoedge display squeezed into the shell of a 13in laptop. We see if it’s more than just a pretty face in our full review.

Chromebook prices have been creeping up in the past few years, so while you might expect one to cost £200/$250 they now regularly push past that figure by some way. The Asus C433TA is no exception, mainly due to the higher display quality and components than the initial cheaply-made devices that started off the whole Chromebook craze.

Customers in the USA will have to wait to get their hands on the new Chromebook, as the device is still to be released in North America but should appear soon.

Taking the C433TA out of its box reveals a slim, long body with a brushed aluminium alloy chassis. The top cover’s edges are bevelled and anodised, making them shiny, smart looking, and adding a touch of class to the aesthetic.

Thick hinges reveal that this is a 360-degree-style design, so you’re able to fold it flat on a desk, put it in a tent shape or wrap the display round flat against the back of the keyboard, creating a large, if somewhat cumbersome, tablet.

Opening the unit is a bit of a struggle as those hinges are stiff. This means it’s a two-handed job, as trying it with one only lifts the whole thing up off the desk. Of course, because of these sturdy hinges we were able to use the C433TA in all of the aforementioned positions without worrying that the display would slip, so it’s swings and roundabouts.

Putting the C433TA in a standard laptop mode lets the gorgeous screen take centre stage. It’s a 14in IPS panel running at 1920×1080 with a 16:9 widescreen format. Thin bezels give the whole display an 85% screen-to-body ratio, and Asus calls the configuration Nanoedge. 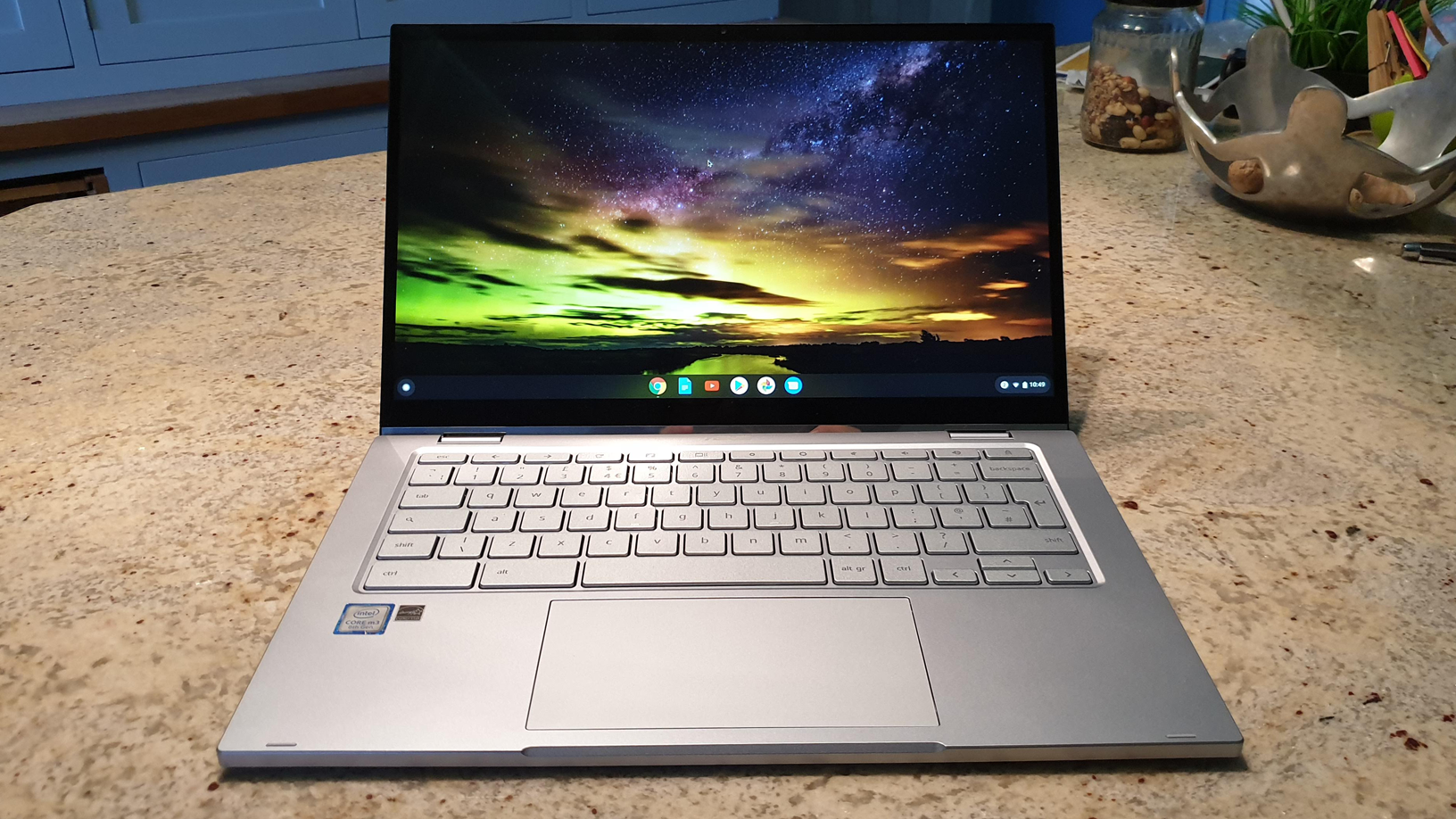 As we’ve grown to expect in modern Chromebooks it also has touch-screen capabilities, so you can either navigate through web pages, documents or play games from the Android store using your fingers.

Should you prefer more traditional methods then there’s the chiclet keyboard and large trackpad. Using the former feels a bit spongy to begin with, but we soon adjusted and found it to be a fast and accurate platform. The keys are backlit and you can control the brightness by holding down the Alt key and using the brightness keys.

Curiously, due to the key markings being transparent, putting it on the lowest brightness actually makes the letters pretty much disappear. So, either turn the lights off or up to a brighter level.

The trackpad works well for the most part, although the surface does have some friction, making the movements less smooth than we’d like. Of course, this could reduce over time as the pad gets some daily use, so we won’t count it against the C433TA.

Twin speakers are found on the underside of the chassis, with additional grills on the flanks. Volume can reach a decent level that will fill a small room, bass is on the light side but not uncomfortably so. 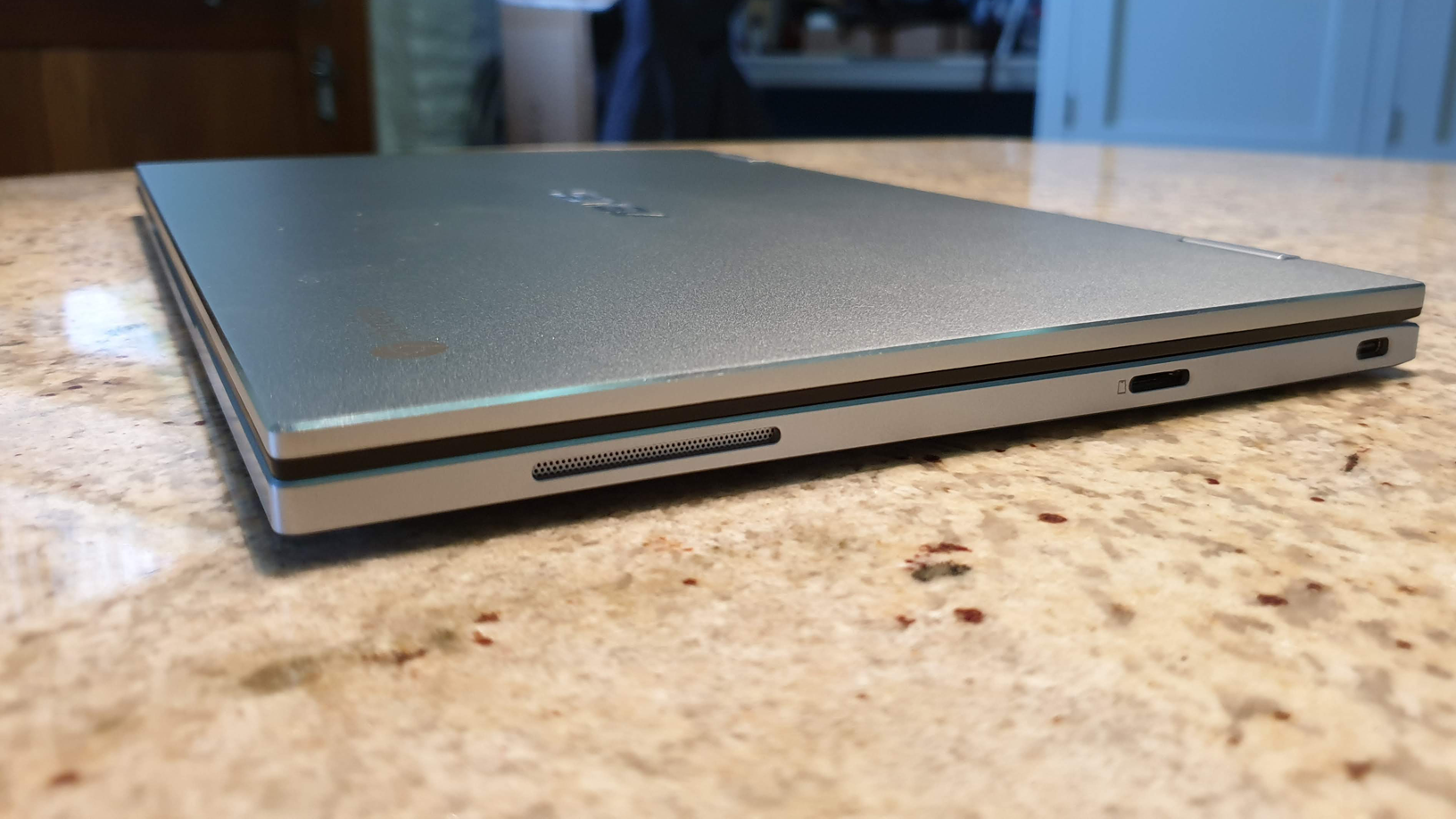 Moving on from the side speakers there’s also a microSD card slot, two USB-C 3.1 ports, a USB 3.1, 3.5mm headphone jack, plus volume controls and the power button.

Powering the C433TA is an 8th-generation 1.1GHz Intel Core m3-8100Y processor. Now, this isn’t the fastest chip around but when you consider the general duties a Chromebook is intended for – ie, creating documents, spreadsheets, surfing the web, watching Netflix, social media and other similar activities – it should be all the power most people require.

Certainly during our everyday use the C433TA performed without any noticeable slowdown, even with multiple tabs open and content streaming in the background.

One area it did struggle was gaming, although we’re unsure whether this was a power issue or the touch sensors. PUBG was hard to control, with touches and finger movements not registering on multiple occasions, plus we experienced similar issues with less graphically-challenging games that required fast responses. Because of this, we’d recommend not really considering this particular device if gaming is high on your list.

We put the C433TA through the standard benchmarks test and it scored 447.46 on Basemark 3.0 and 78 on Jetstream 2 making it one of the strongest performers we’ve seen.

4GB of LPDDR3 1866MHz RAM are onboard, with 64GB of eMMC storage keeping things ticking along nicely. On a standard Windows 10, Linux or macOS laptop this amount of storage would be a ludicrously low amount, but as ChromeOS is primarily designed to keep things in the cloud rather than on the hard drive it’s plenty.

As is standard with new Chromebooks you’re also entitled to various promotions run by Google that offer large amounts of space for free on the Google One servers.

To test the battery life we streamed a Full HD video from YouTube, a rather lovely cracking fireplace, until all the power was drained. This took a mightily impressive, 11 and a half hours. So, the C433TA isn’t going to have any problems lasting the working day and then some.

ChromeOS is coming along nicely, bolstered by Chromebooks now able to run Android apps. The interface is simple, as it’s essentially the Chrome browser with a few extra bits and pieces, so most people already know how to use it from the get go.

The Google suite of apps make it instantly productive, with Google Docs, Sheets, and Slides all free and capable replacements for Microsoft Office. Gmail integration is built right into the system, and the Web Store provides a good range of other apps.

If you’re looking for a simple, easy to use machine then a Chromebook is a great choice, so long as you realise that many Windows and macOS apps won’t work on the system. But, there are usually alternatives or online versions that will serve you instead.

With a street price of around £400/$400 Asus has pitched the C433TA perfectly. It’s a good looking machine, well built and has enough power to deliver pretty much anything you want from a Chromebook.

The sluggish gaming performance is  a disappointment, but that’s about it, and if we’re honest who buys a machine of this sort to play games?

Huge battery life is a much more useful feature and a decent selection of ports makes the C433TA a versatile laptop. If you’re looking for a quality Chromebook, this one needs your serious attention.