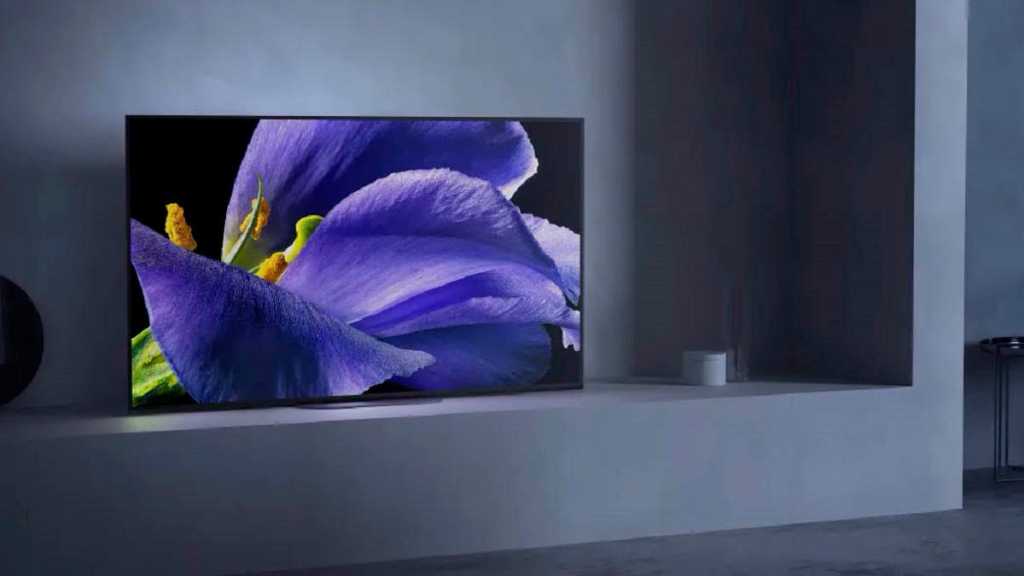 Stunning colours, contrast, localised brightness, huge sound and all the functionality of Android TV and Chromecast. It’s just a crying shame that to get all this wonder requires such a large investment in technology with a notoriously rapid turnover. You’ll love this TV, but not the hole it makes in your bank account.

Sony Bravia branded TVs have cultivated a high reputation from its use of cutting edge technologies, fantastic build quality and desirable features. The Master Series AG9 is a flagship OLED TV that brings together the best that Sony design, LG panel technology and Google operating systems into one ultimate viewing experience.

But is the high cost of this hardware justified by the exceptional colours, amazing dynamic range and superb sound that the AG9 offers?

Price & Where to buy

For those of a nervous disposition should maybe skip this section.

Check out the  latest TV Deals.

As this AG9 is OLED, it doesn’t have a backlighting system as such, each pixel is self-illuminating. That makes this TV remarkably thin and elegant, even if the lower rear portion that houses all the inputs and outputs is much thicker.

Normally, the thicker part would also be where the sound drivers are mounted, but in the AG9 the whole screen is a source of sound output through transducers mounted in it, further reducing the volume of the set. 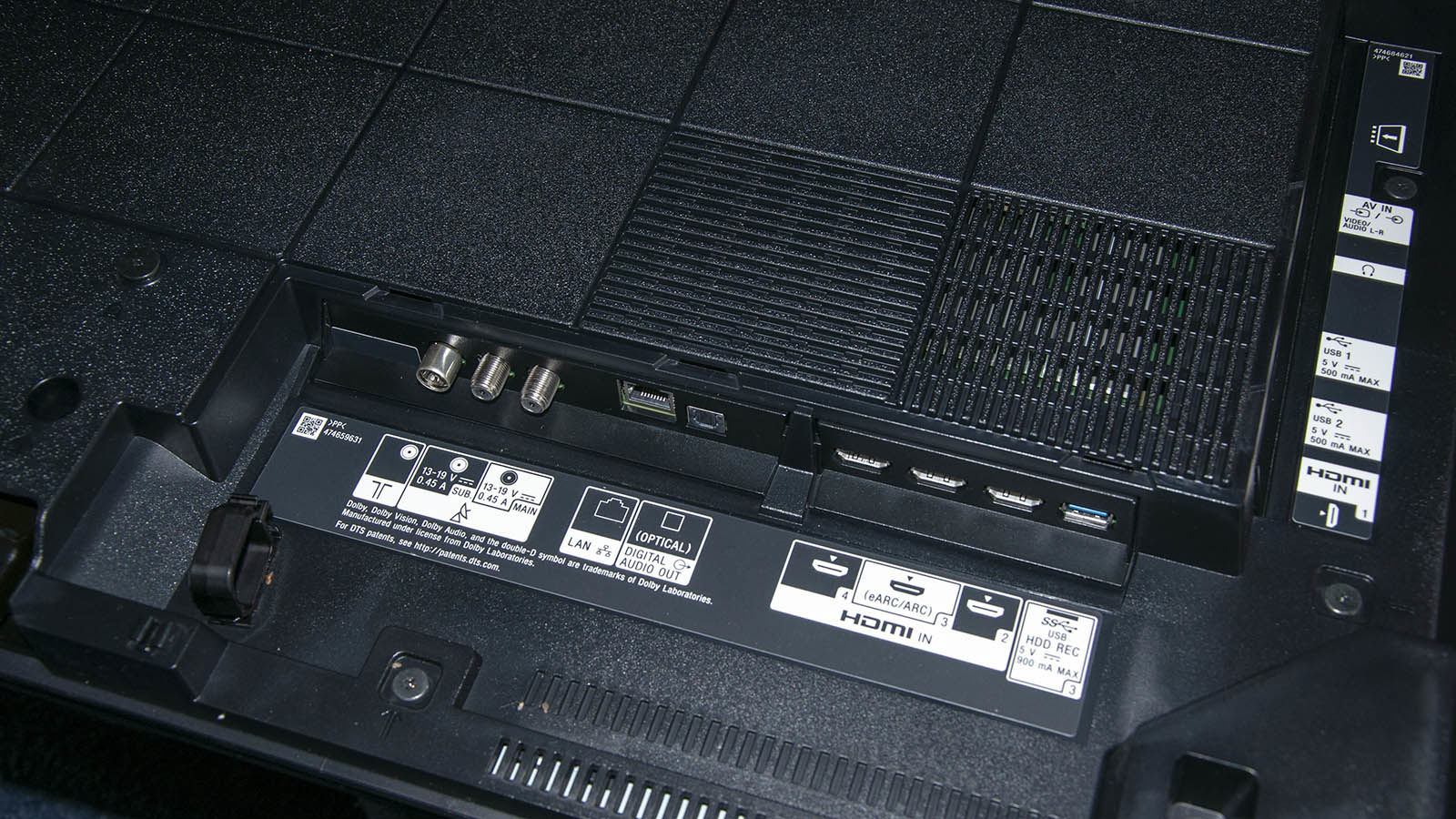 On this design all the inputs are on the left, facing the TV, and the AG9 comes with an extensive set of plastic covers to cover up the wires and make it hard to move them once mounted to a wall.

If you don’t wall-mount, the large curved foot has various cable holding elements on it, making for an exceptionally tidy installation. Our only problem with the foot is that it gives almost no clearance below the screen.

This choice hides all the cables very effectively but is problematic if you have a cable/satellite box or another device that you like to sit in front of the TV. Unless that item is remarkably flat, it will obscure the picture.

The foot connects through two short metal pressings, and these need redesigning so that you can have it as it currently sits, or a couple of inches higher. 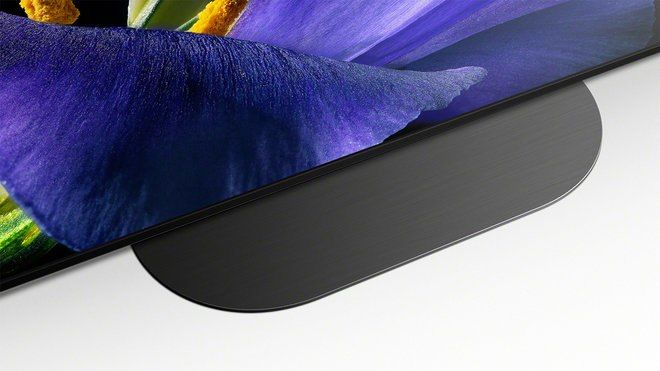 Along with the AG9, you get a single large and metal finished remote control that includes special buttons for Google Assistant, Google Play and Netflix. There isn’t a button for Amazon Prime, but it is included as a default app in the Google TV installation, along with many of the other popular streaming services for the specified region.

We should also mention that this TV has a Netflix calibrated mode and is certified for that service. But the real star of this show is the panel and the amazing natural colour representation, contrast and details available through it.

With standard HD content, the Sony X1 Ultimate processor manages to blend away annoying artefacts and shimmer, giving the impression that the stream or broadcast is better than it truly is. And, when it has 4K HDR content, this panel can represent the difference between total black and the darkest corner of a shadowy scene. 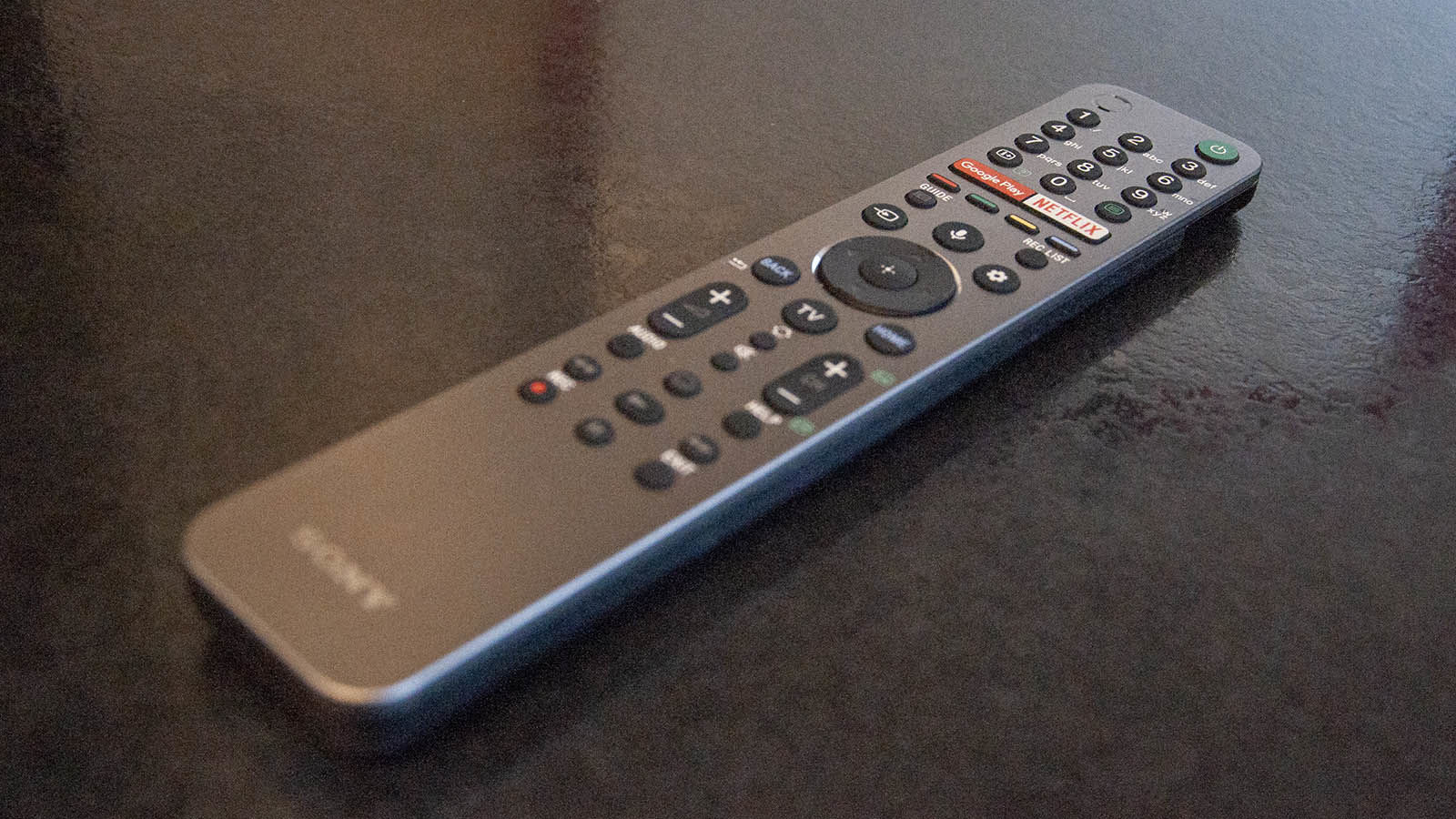 After several weeks watching this TV, we still find ourselves impressed with the contrast and subtle hues it can generate that make other HDR TV’s seem like their colour saturation is locked into ‘gratuitous’ mode.

However, it has some limits, even if only a videophile might be able to identify them.

Those that like to trawl through the specifications might notice that while the AG9 is rated for Dolby Vision HDR, HDR10 and HLG, it doesn’t include HDR10+.

What’s important to realise about HDR10+ is that part of its reason for existing is to use tone maps to help HDR TVs with limited brightness output, and that’s not an issue for the AG9 in most situations. We never saw dark scenes where all the detail was lost, or overly blasted bright images, so the worth of HDR10+ on this TV is debateable without much more content encoded to this standard.

Sony caps the pixel illumination at 500 nits generally and 750 nits for limited localised effects. Although we believe for short periods and smaller areas, we estimated that it can generate closer to 900 nits.

The same panel on the LG C9P offers greater peak brightness, but we like the balance of colour and brightness that the AG9 offers. 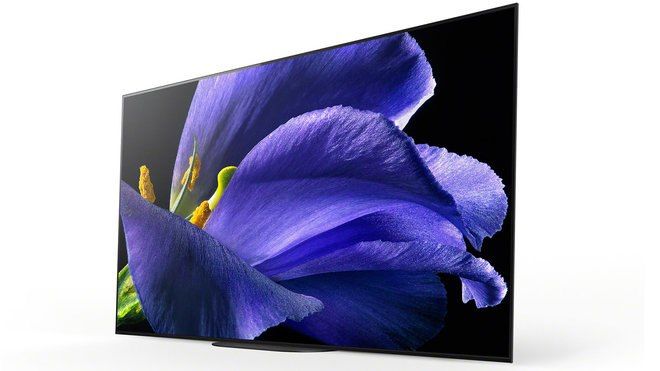 Along with HDR10+ is also lacks is any specific low latency game mode or FreeSync compatibility, although we suspect that these could be added with a software upgrade if Sony was inclined to do so.

One very interesting feature that isn’t normal is that the AG9 has audio inputs to allow the screen to act as the centre speaker in a surround sound setup. This feature allows all the other audio to be presented through external drivers but speech to come from the TV speaker, removing the physical need for that centre speaker.

For most customers, the sound on the AG9 is so good and powerful, that they won’t need external speakers or even a soundbar. But, for those that want the full home cinema experience, the centre speaker option could be useful.

We never got the sound volume to 100, because by level 60 it was getting excessively loud, and we don’t fancy hearing loss. 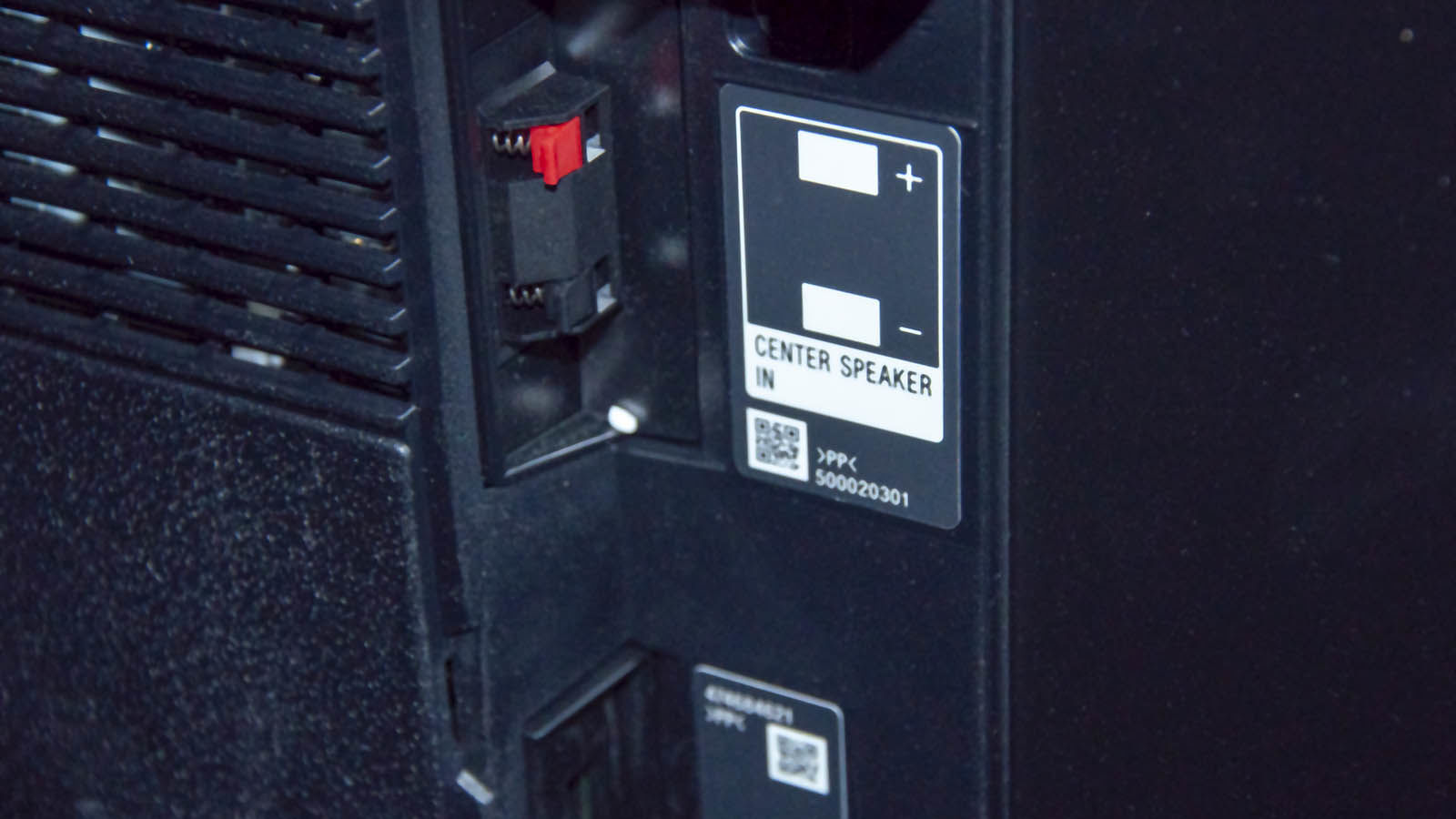 From the factory, the balance of the image is very close to perfect, although depending on the environment, some tweaks are necessary. We aren’t fans of what the ambient light sensor does to image brightness, but it can be easily disabled. And, it would be nice to have definable custom settings for SD, HD, 4K and HDR content available.

But these are minor points, and overall image quality and control are best in class.

Android TV has received some justified flack in the past, mostly because of hardware makers that throw very cheap phone electronics in their TVs and expecting that to work effectively on a 4K resolution system.

But interestingly, the Android TV (8.0) interface only runs in 1080p on this set, and the quad-core MediaTek MT5893 CPU and Mali-G71 GPU, 4GB of RAM and 16GB of storage can easily cope with typical usage.

If you install the Android VLC app, it can happily decode X264 and X265 content from inside MKV packaging and play it flawlessly.

The advantages of using Android over another OS is that you can install a wide range of standard applications, including those for lesser-known streaming services, and get all the extra Google features such as Google Assistant. 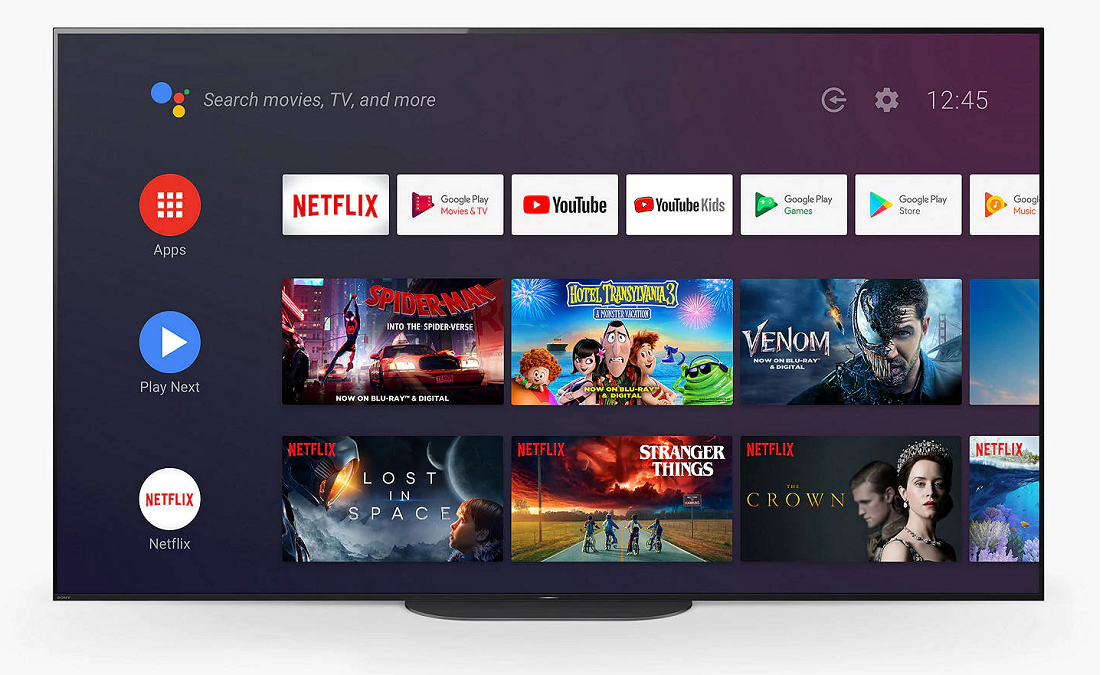 Being able to talk to the TV via the remote can be useful, even if some people will merely use it to tell the TV to look for cat videos on YouTube. And, you won’t need a Chromecast with the AG9, as it has that technology built-in.

We only have a few reservations about the Android platform on this TV.

One is that unlike other solutions once you switch over to the interface, all video and sound is disconnected from what you were watching. If you are watching a sporting event but would like to know the score on another game, you can’t do this without hiding the live source so a picture in picture would be very useful.

The other significant one is that you can only have one Google account associated with the TV at a time, making it less useful for those families that might want to swap between accounts often.

To solve both these issues would require more effort on the Android subsystem, and it would be worth that investment we’d contest.

We could spend all day thinking up exotic superlatives about this TV, but I’m sure the Sony engineers that designed it have big enough egos already. We’ve not had a TV that’s we’ve regretted returning more than this one, as it elevates whatever you put through it to a whole new level.

It’s especially impressive with HDR content, as the tonal mapping makes the most of the panel without making images look hyper-real or unrealistic. Despite the lack of HDR10+

That said, is it worth spending more on compared to the LG Electronics C9P? Perhaps not.

Because unless what you watch on TV is exclusively 4K HDR Blu-ray’s or other 4K HDR content, then the AG9 is excessive for watching a lot of broadcast TV, HD or SD cable or satellite streams and Netflix HDR content. You will be future-proofing though.

Yes, the artefact hiding routines in the image processing might make HD content look distinctly better, but it can’t create a more dynamic range or even finer detail out of that data.

And, that’s the rub right there. The Sony AG9 is the TV for a perfect audio-visual world, where we’ve all got enough broadband to stream a dozen 4K HDR movies at once, and every channel, movie or TV show squeezes the most out its source to achieve the best presentation possible.

But most people don’t live in that world, and the money spent on this TV could buy a mildly less impressive screen, like the Sony A8G, and have enough cash left over to splash on a new fridge or dishwasher. Or, you can get a similar experience with the LG C9P for substantially less.

As good as the AG9 is, and it’s marvellous, it is expensive even after a recent round of reductions. Check out the best TVs we’ve reviewed if you’re not sure about getting the AG9.