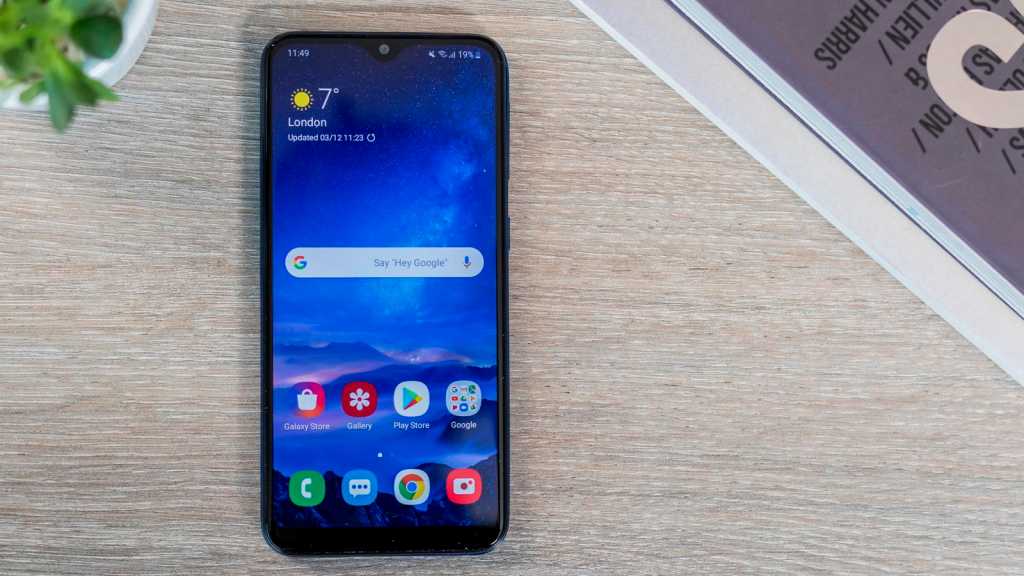 Compact phones are becoming rare nowadays, so this handset will definitely appeal to people looking for a device that’s easier to handle. The A20e impresses on first impressions, with an intuitive user experience enhanced by solid speakers and great cameras for the price. However, extended usage reveals some frustrations, most notably the low quality display and sub-par battery life.

Its flagships get the vast majority of the attention, but there is plenty more to Samsung’s lineup than the S and Note series. In fact, there have been seven Galaxy A phones this year alone!

The choice can be dizzying, even once you’ve identified the manufacturer you want to go with. Check out our best Samsung phones chart if you’re looking to simplify that decision.

The Galaxy A20e is among the cheapest phones the Korean giant makes, and on paper it offers much of what most people are looking for in a compact package.

But can it can stack up to the increasingly wide variety of capable budget handsets? Read our full review to find out. 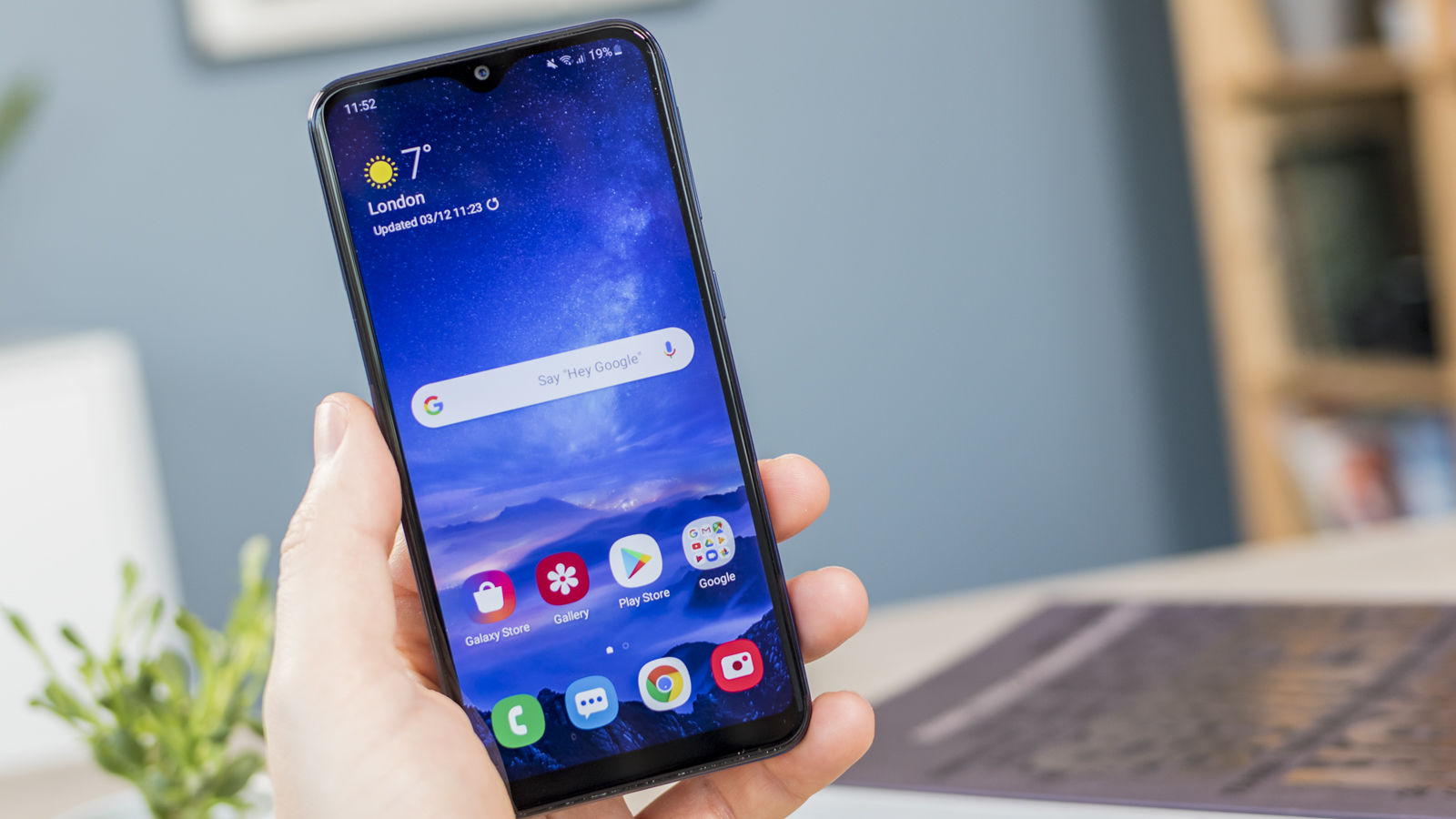 The A20e is currently available for £169 direct from Samsung. However, with the phone having been released in May, there have been some price drops if you’re willing to look elsewhere.

Our sample was supplied by Carphone Warehouse where you can get a free A20e with selected SIM-only deals. The phone is currently being sold for £129 on Amazon, while it’s also available on Currys PC World, John Lewis and Ebuyer.

Regardless of the variation in price, this phone is firmly in budget phone territory. However, to be considered among the best in class it faces stiff competition from the likes of Xiaomi, Honor and Motorola.

While the brand name might be a lure for some, it will have to do a lot more usurp these phones as the budget champ.

The design of the A20e is typical of many modern smartphones. The 5.8in, 720×1560 LCD display undoubtedly borrows some design influences from the more expensive S10e, albeit with a significantly lower screen resolution.

A 19.5:9 aspect ratio makes this a tall, narrow phone. The recent trend towards these devices is not for everyone, but the smaller screen does at least make one-handed usage a possibility if you have larger hands.

Samsung has gone with a teardrop notch to house a front-facing camera, as opposed to the hole-punch used on its flagships. While this does allow the phone to achieve a respectable 80.4% screen-to-body ratio, it seems a little unnecessary considering there’s still a fairly sizeable chin. This is probably the easiest way to differentiate it from more expensive handsets, where manufacturers are much more inclined to go for broke.

On the back, there’s a dual camera setup, and we’re glad to see that the second lens is ultrawide as opposed to telephoto. It’s great to see the camera module sit almost flush with the back of the phone

While the rear-mounted fingerprint scanner is a little higher up the device than normal, it’s still in a very natural position as a result of the smaller footprint.

It’s probably a wise decision to retain the headphone jack, particularly considering people might be less willing to separately invest in wireless audio at this price point. 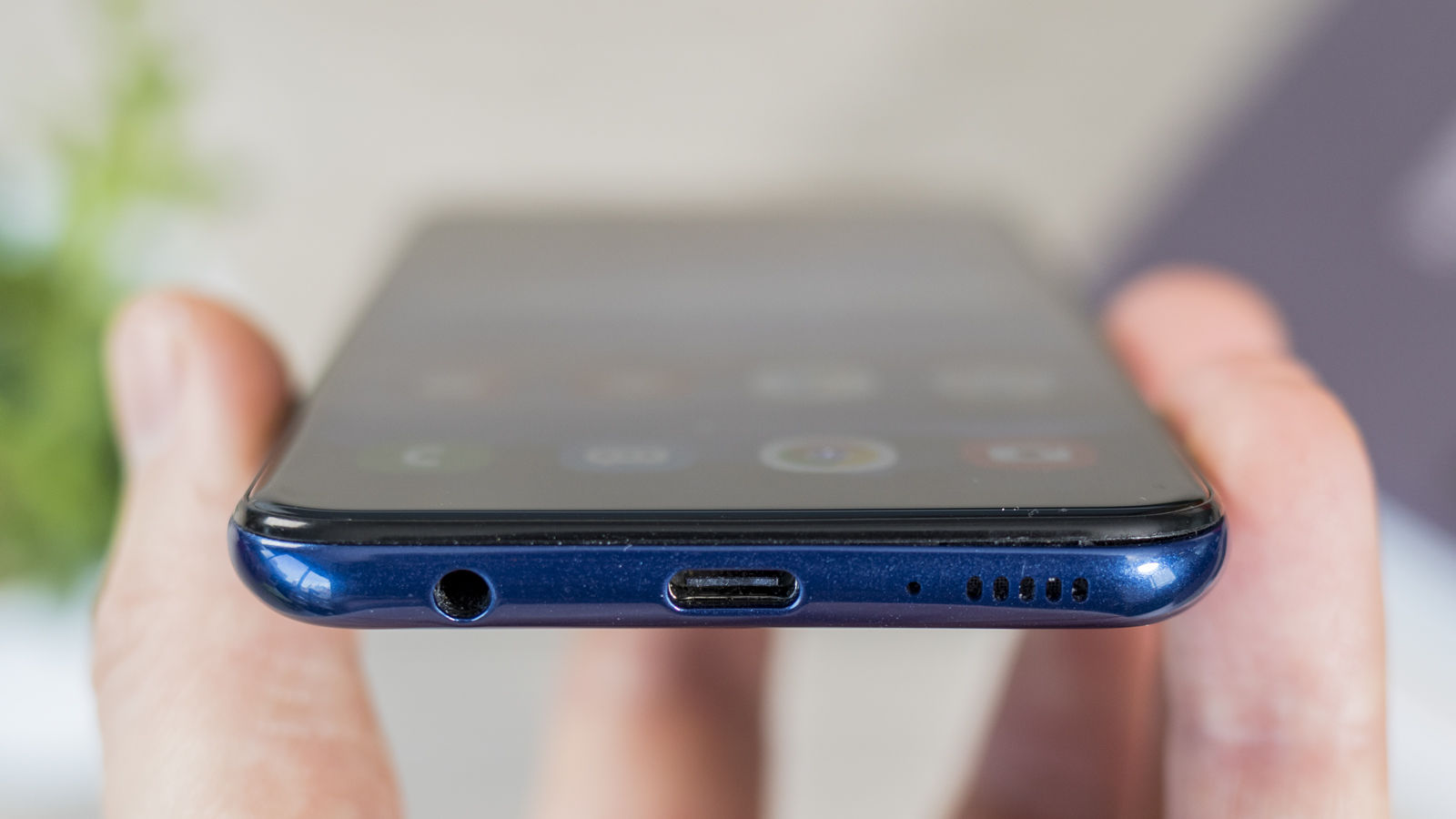 It is becoming increasingly hard to discern budget phones from more expensive handsets in terms of look and feel, and the A20e continues this trend. Samsung has gone with a tried and trusted design, one that does little to stand out but can definitely be relied on.

We tested the blue model, but it’s also available in an eye-catching coral alongside standard black and white variants.

The A20e is running the Exynos 7884 processor, described as offering ‘big performance for all’. Samsung regularly opts for ARM’s chipset as opposed to Qualcomm’s industry standard Snapdragon line, of which the 660 would be the more comparable.

Combined with a Mali-G71 GPU, it aims to provide a steady level of performance, with a clear emphasis on reliability. These are mid-range specs at best, so the A20e should be able to cope with everyday processes but struggle with anything more complex. 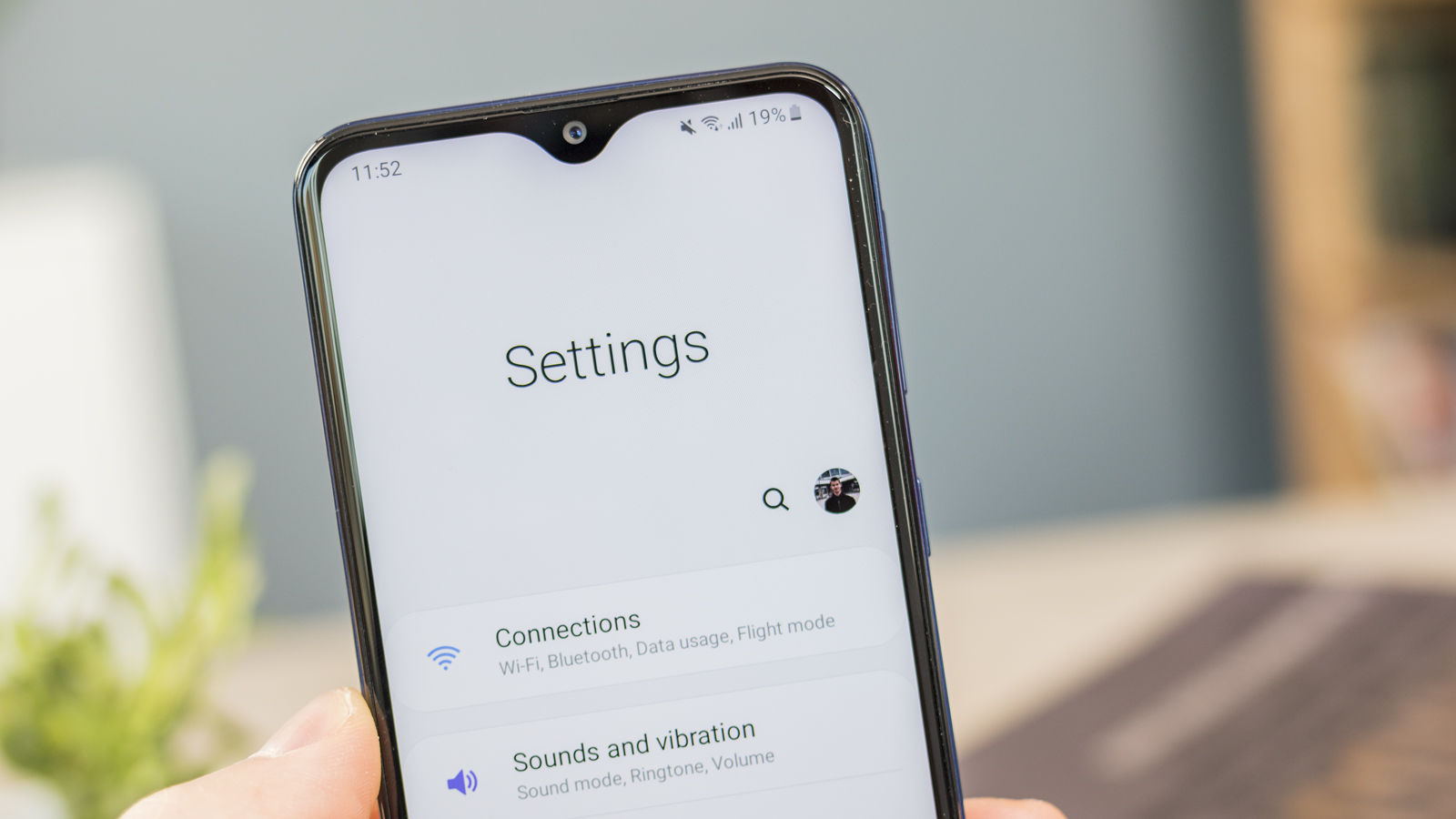 Having used it for an extended period of time, to say it succeeds in this area would be a slight stretch. While it can cope with browsing the web, streaming video and texting without a problem, issues arise when you attempt to use it as a true pocket computer.

It does suffer a little with only 2GB of RAM, lacking the synergy between hardware and software that we see on Google and Apple devices. The device does lag from time to time, even with basic app switches and launching apps. Anything beyond the most basic games is out of the question. If you’re used to a super-fast high end device, this will take some getting used to.

The below benchmarks go some way to illustrating its slowdown in performance when handling any complex processes. It performs similarly to the Galaxy A10, another budget Samsung phone, but struggles against some of the best at this price point.

Just stepping up a few pounds will get you the Xiaomi Mi 9T, which offers a huge performance boost, due in part to the Snapdragon 730 inside . The Moto G7 Play equals or betters the A20e in most tests, despite being more affordable at many retailers.

In terms of on-device storage, the only option is to go with a paltry 32GB. Considering the operating system usually takes around 3-4GB, offering under 30GB for your files is frankly inexcusable in 2019.

Many people will encounter issues with storage space before they’ve even properly started using the device. The one saving grace is that it can be expanded up to 1TB thanks to the included microSD card slot, but that’s a separate purchase that wouldn’t have otherwise been necessary. If you’re not sure which one to go for, check out our round-up of the best microSD cards.

The A20e comes running One UI over Android 9 Pie. Samsung’s custom skin has quite a different look and feel to Google’s stock OS, prioritising ease of use on devices with screens regularly in excess of 6 inches.

As a compact phone, this device doesn’t benefit from these adaptations in the same way as Samsung’s flagships, but the clean and slick user interface is still our favourite ever software experience since the Galaxy line began. We’re still surprised that Google hasn’t incorporated the option to make changes directly from the quick settings menu into its Pixel phones.

While there’s still plenty of bloatware, some of these apps are genuinely useful and add to the user experience. In particular, Gallery works well in tandem with Google Photos and the Clock app is incredibly easy to use.

And with the Google Assistant sufficiently baked into the OS, you’re not losing out on the most capable virtual assistant around. Bixby’s appearances are fleeting, and there’s not even an option to add the Bixby Home side panel, but we doubt you’ll miss it. 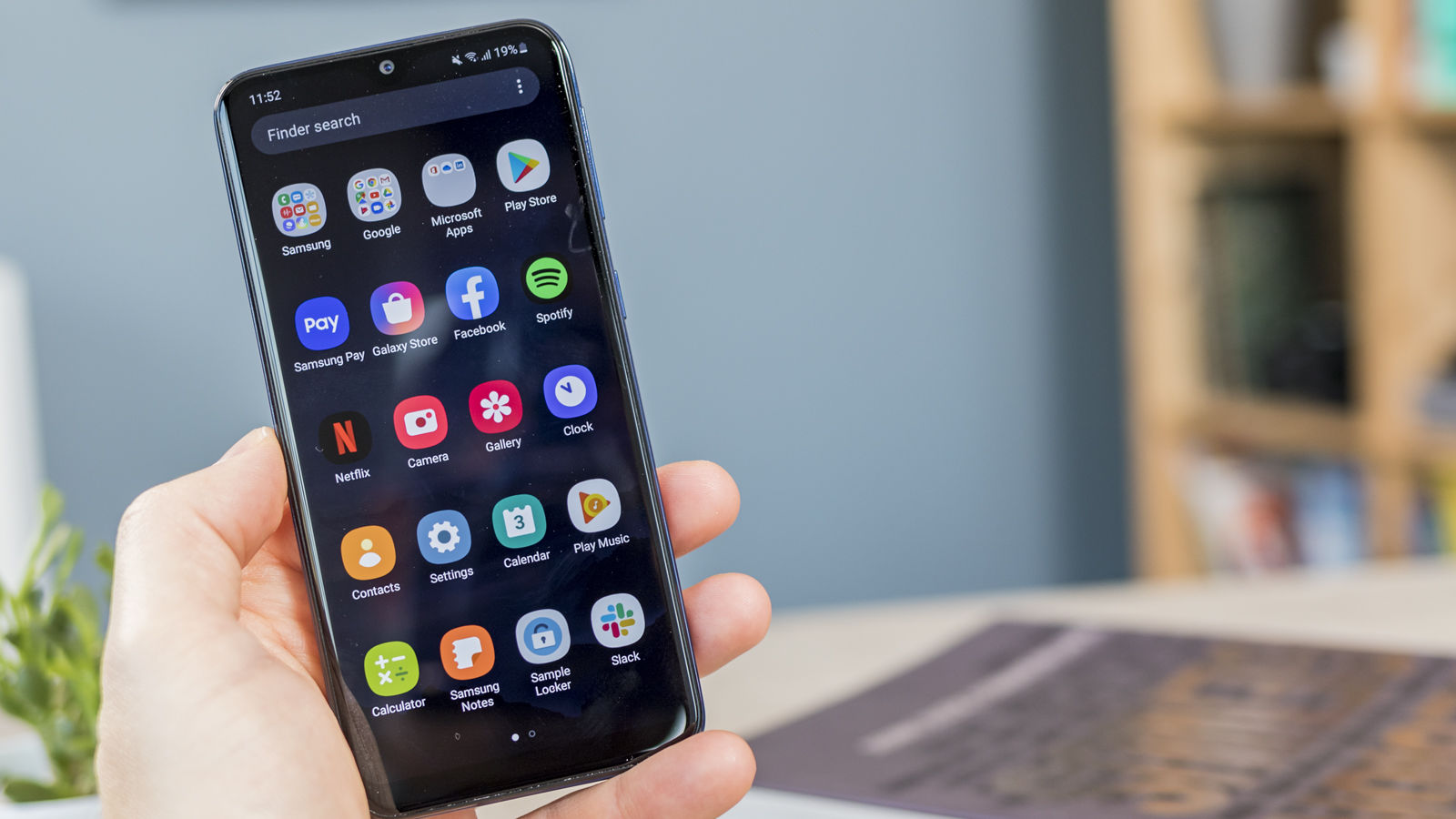 Curiously, on our review unit we were unable to turn location services off, and were presented with the message “Security policy prevents use of Location”. Samsung is particularly ambiguous about this on its official site, simply saying “security purposes” prevent you accessing this area of the phone.

Some frustrating things remain, however, including the ‘Galaxy Store’ in addition to regular Play Store and an annoyingly persistent Facebook app. Your best option is to disable them in settings, but they’ll still take up some storage space.

None of this will be a surprise if you’re coming from a recent Samsung phone, but it does highlight the considerable variation among different versions of Android.

The recently unveiled One UI 2 will be available alongside an upgrade to Android 10, which is expected in early 2020. Of course, if your main gripe with this phone is software, you can choose from a growing number of excellent launchers, which can completely change the look and feel of your device.

Considering the smaller footprint of the phone, its sound output is pretty impressive. It employs the increasingly common tactic of using the earpiece to supplement sound from the downward-firing mono speaker, and does so to good effect. For extended listening sessions, this won’t perform to the standard of the Note 10 series, but we’re confident you’ll be satisfied for occasional use.

The aforementioned fingerprint scanner is the only biometric option for unlocking the A20e, despite many phones using a single-lens front facing camera for face unlock. Enrolment is simple and it works pretty well most of the time, although it is particularly susceptible to dirt or sweat. 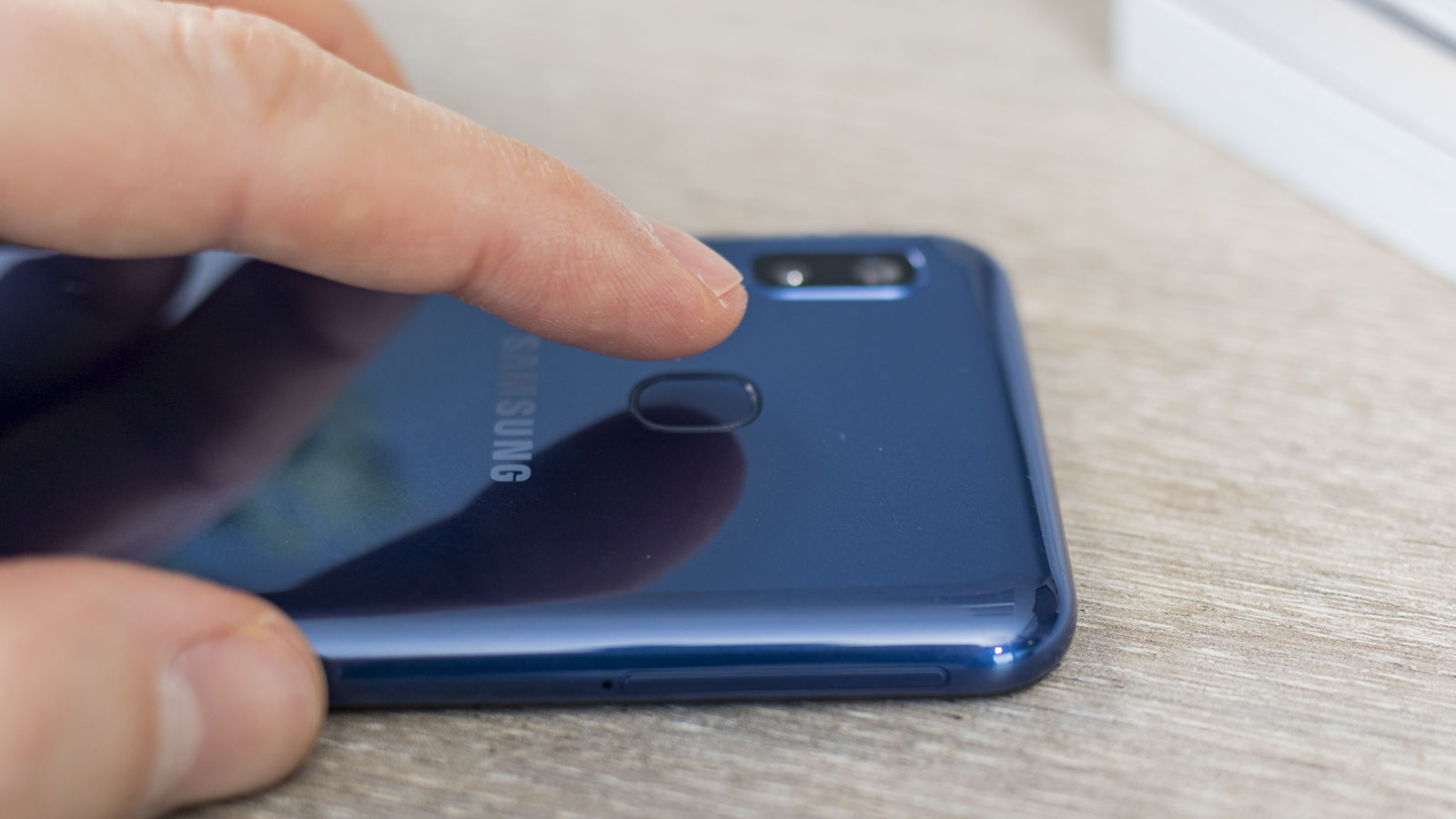 Cameras are the most common area where budget phones cut corners, but you’ll be pleased to hear the step down in image quality is relatively small.

Stills from the A20e are most comparable to older Samsung flagships, and retain their tendency to produce vibrant, saturated shots with a good level of dynamic range.

We’re glad to see that the secondary lens is a wide-angle as opposed to telephoto, which gave us the flexibility to add context to photos in a way that just wasn’t possible before.

However, we’d recommend going for a different handset if you enjoy taking lots of portrait shots. The A20e doesn’t even offer the option for a software-based blur effect, as has become more common recently.

The camera was particularly suited to the beach landscapes, which looked stunning even when overcast. Natural light is a key factor here, as without a dedicated night mode you’re reliant on good shooting conditions to get the best shots.

Check out more of our images in the slideshow below, which you may have to click to view in full: 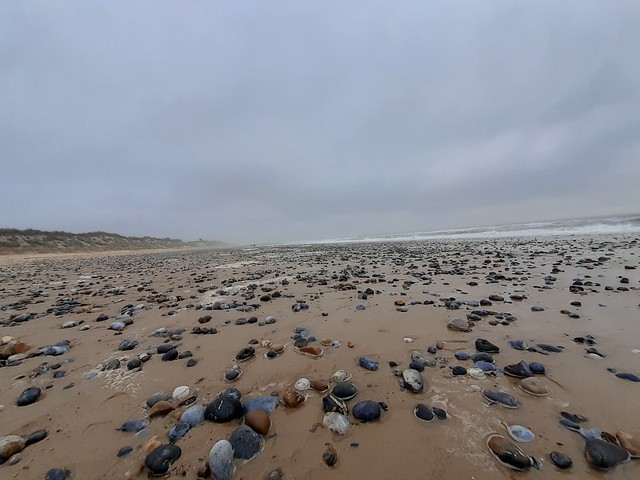 Video is pretty solid too, despite 1080p video up to 60fps being incredibly common nowadays. Footage from the A20e is crisp and clear, although lacking just a little in detail when compared to stills, while the build in OIS avoids the juddery video of some similarly priced handsets.

On paper, the 3000mAh battery should ensure solid battery life on a smaller resolution display, but we feel a bit let down by the A20e’s staying power.

It recorded a rather disappointing 5 hours and 51 minutes in Geekbench 4’s battery test, barely half of the time recorded by a fellow budget handset in Xiaomi’s Mi 9T.

While this isn’t always the best metric of day-to-day usage, it does suggest that the full capacity is not being optimised in the same way as Samsung’s flagships. It becomes all the more curious considering the dedicated battery section within ‘Device care’ remains.

The device does support Samsung’s 15W fast charging, and we were able to get 38% of battery in 30 minutes from off. There’s no wireless charging here, although that’s hardly a surprise at this price point. 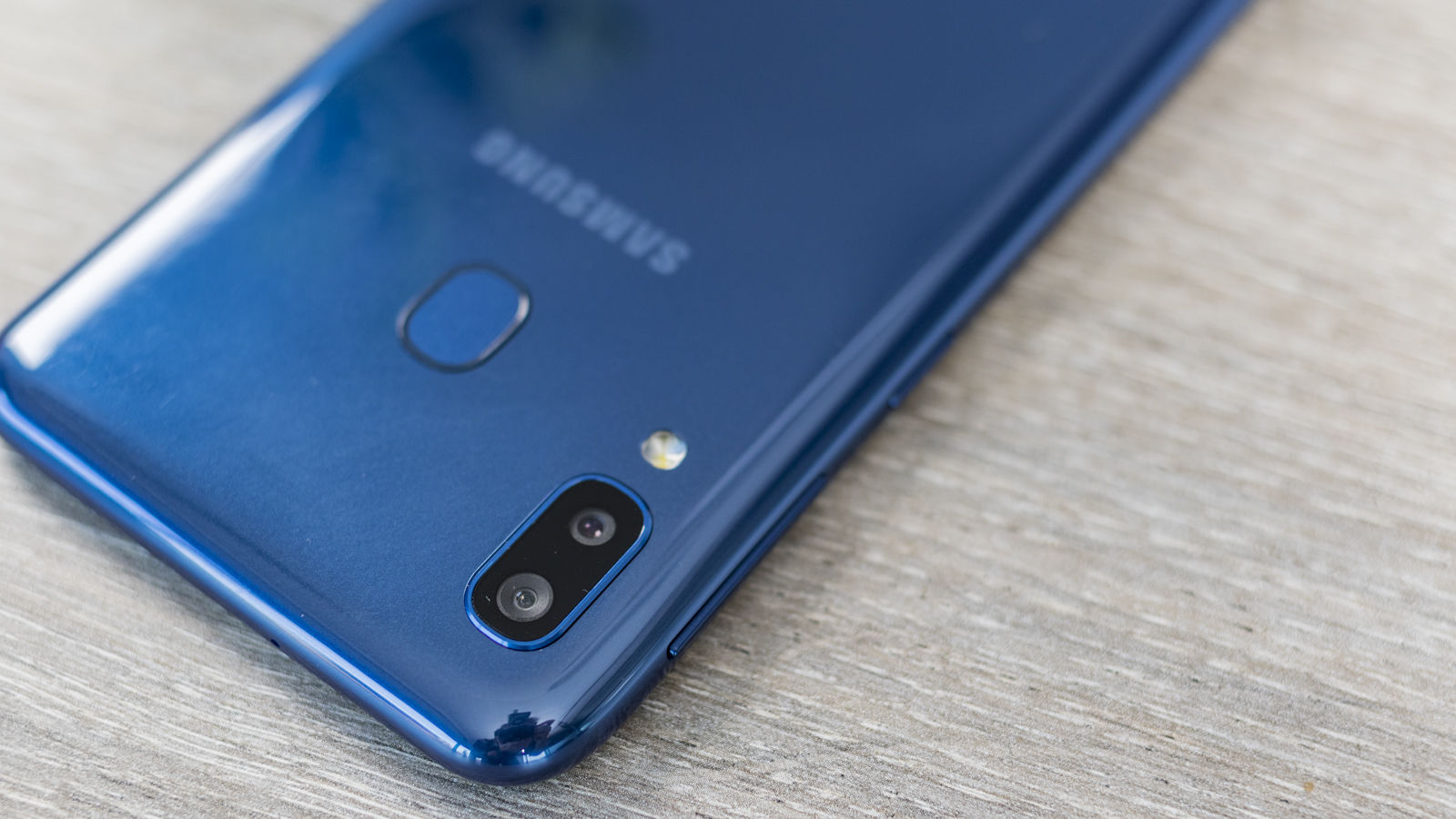 The A20e is one of Samsung’s most affordable handsets, but for many people this stripped back feature set will provide everything they need.

It retains the polish of One UI, while boasting solid cameras and a decent set of speakers. However, it is let down by a low resolution screen and disappointing battery life, two key areas for a phone to be considered a success.

While these faults could have been forgiven at this price point in the past, the number of highly capable handsets under £200 make it harder to recommend.

If you really want a budget Samsung phone, you’ll probably be satisfied, but there’s likely to be a superior Android experience that is not too dissimilar with other manufacturers.