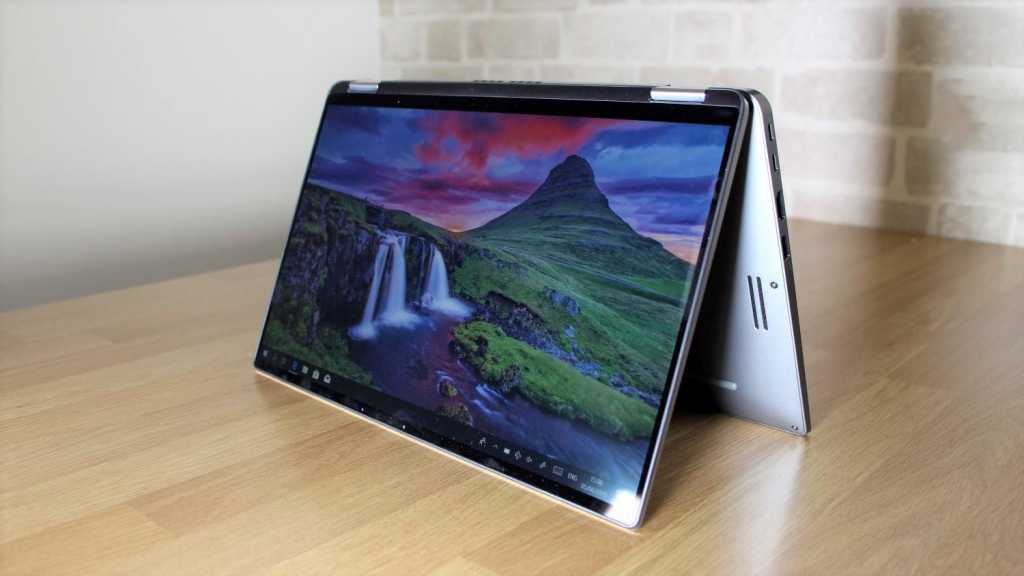 Dell’s machine is one of the best-looking business laptops around, and it has a great hybrid design, a superb screen and excellent battery life. However, it can’t compete when it comes to connectivity and keyboard quality and it falls behind rivals on performance, too.

The Dell Latitude 7400 2-in-1 is one of the best-looking business laptops around, with a stylish metal design and a smart hybrid mechanism – but that’s not enough to earn plaudits in the competitive world of office machines.

This rig pairs its smart looks with a price of £1,679, which is a hefty chunk of change to invest in any laptop – even if it’s your IT department’s money to spend rather than your own.

Customisation options are available, but the Dell isn’t as versatile as the Lenovo ThinkPad X1 Carbon 7th-gen – there are no 4K or 1440p screen options, for instance, and fewer memory and storage options available in the UK.

You’ll also find the 7400 2-in-1 at Amazon and the non-hybrid version is available from Laptops Direct at under £1000.

The Latitude is made from brushed aluminium that looks fantastic, and the design is rounded out by precision-milled edges, tiny screen bezels and shining hinges and logos. It’s certainly better-looking than its main rival – the Lenovo ThinkPad X1 Carbon. That machine uses a classic ThinkPad design that just isn’t as eye-catching. 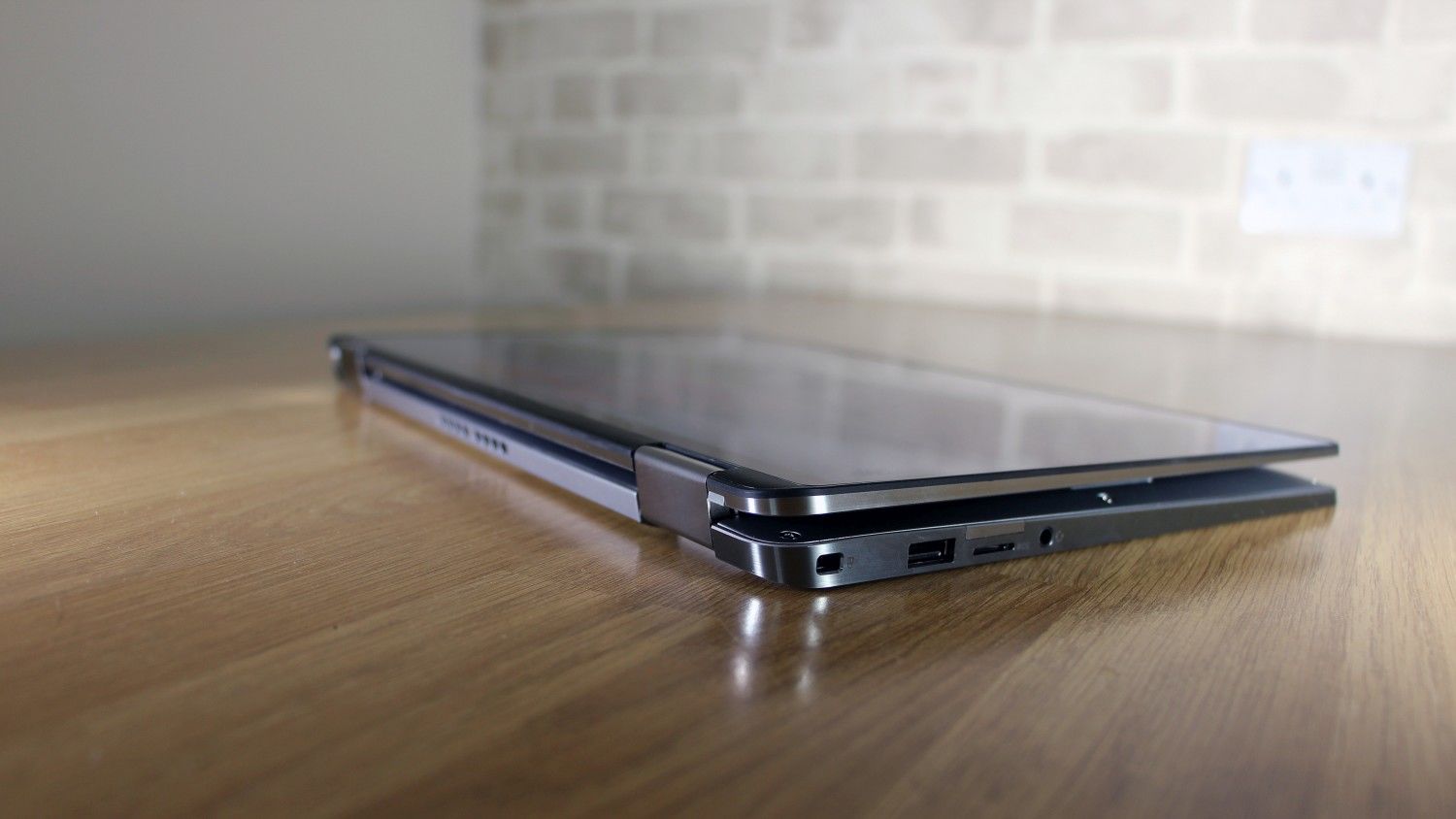 The Latitude is good in a practical sense, too: the 360-degree hinge rotates smoothly, allowing it to quickly flip to tablet mode – or to tent and media positions too.

It uses a 13in chassis with a 14in screen, which means it’s 320mm wide and 200mm deep – and so slightly smaller than the Lenovo. Sadly, though, its 1.3kg weight makes it weightier than the ThinkPad, although the fine margins here won’t impact most users.

Get closer, though, and the Dell does reveal the occasional weakness. The screen and the area around the keyboard are sturdy, and the Latitude has MIL-STD certification, but the metal underside can be pushed all the way to the components inside. For that reason, we’d use a protective sleeve with this laptop, and that isn’t strictly necessary with the Lenovo.

The Dell’s connectivity can’t quite match up, either. It starts well, with pairs of USB 3.1 ports and Thunderbolt 3 connectors, and this machine does have a microSD card slot – something the Lenovo doesn’t include. On the inside, the Dell has dual-band 802.11ac wireless, optional 4G modems and Bluetooth 5.0 and it’s got a SIM card slot. 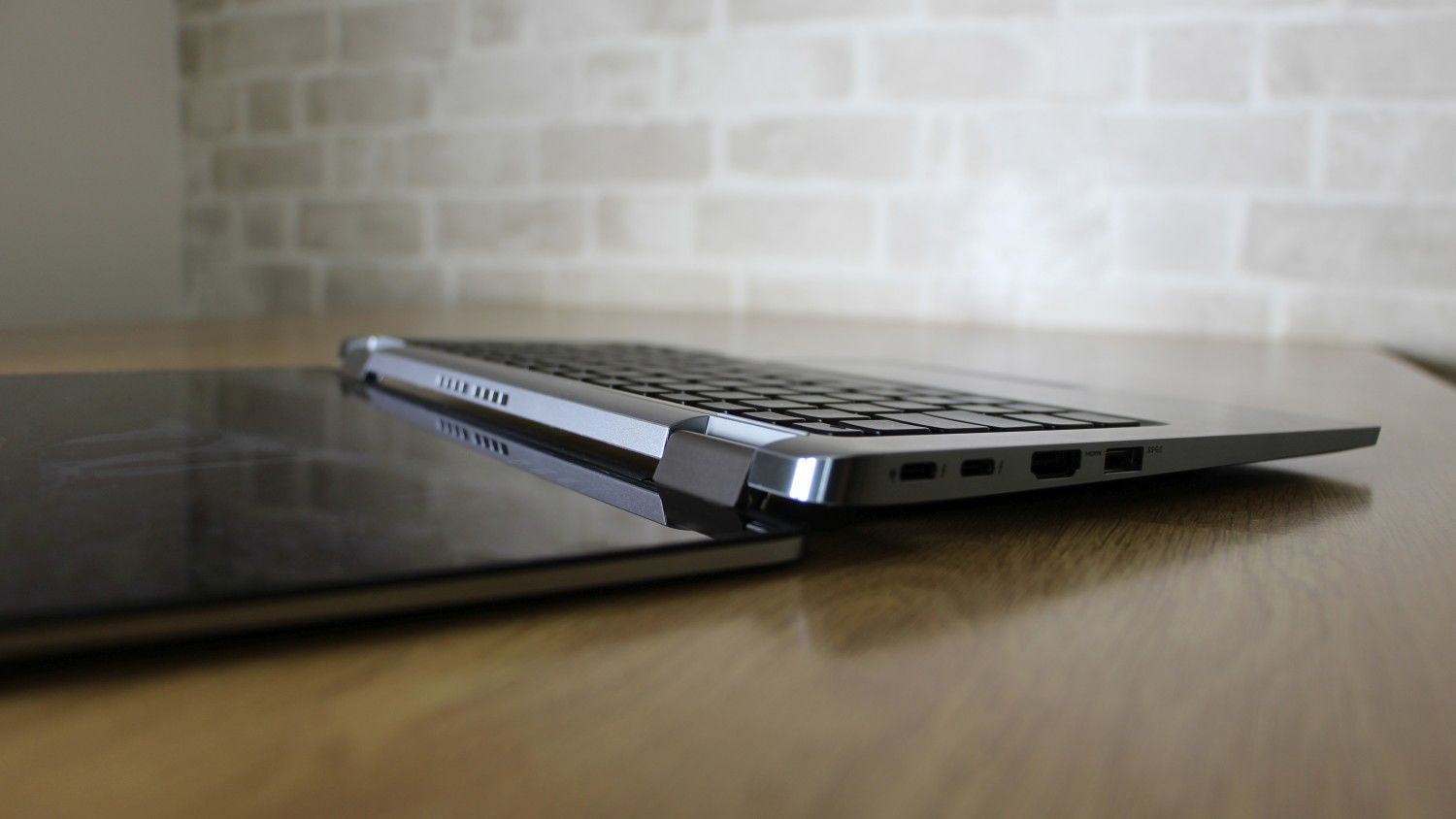 There’s no Ethernet port, which is no surprise, but you’ve got to pay extra for a USB adapter. Lenovo’s machine includes an adapter and has its own interface, which means you don’t need to occupy a USB port.

And, while the Dell’s IR webcam has proximity sensing and works well with Windows Hello, it doesn’t have a physical block like the Lenovo. The fingerprint reader isn’t included by default like it is on the Lenovo, either – that’s something else you need to pay extra for.

The Latitude’s keyboard isn’t quite as good as the famous ThinkPad offering. The layout has several small weaknesses: the Return key is it smaller, the Cursor buttons are cramped, and neither machine has a numberpad.

The ThinkPad also has more on the function row, including Bluetooth and Wi-Fi toggles and a settings shortcut. Dell offers none of this which is a shame. 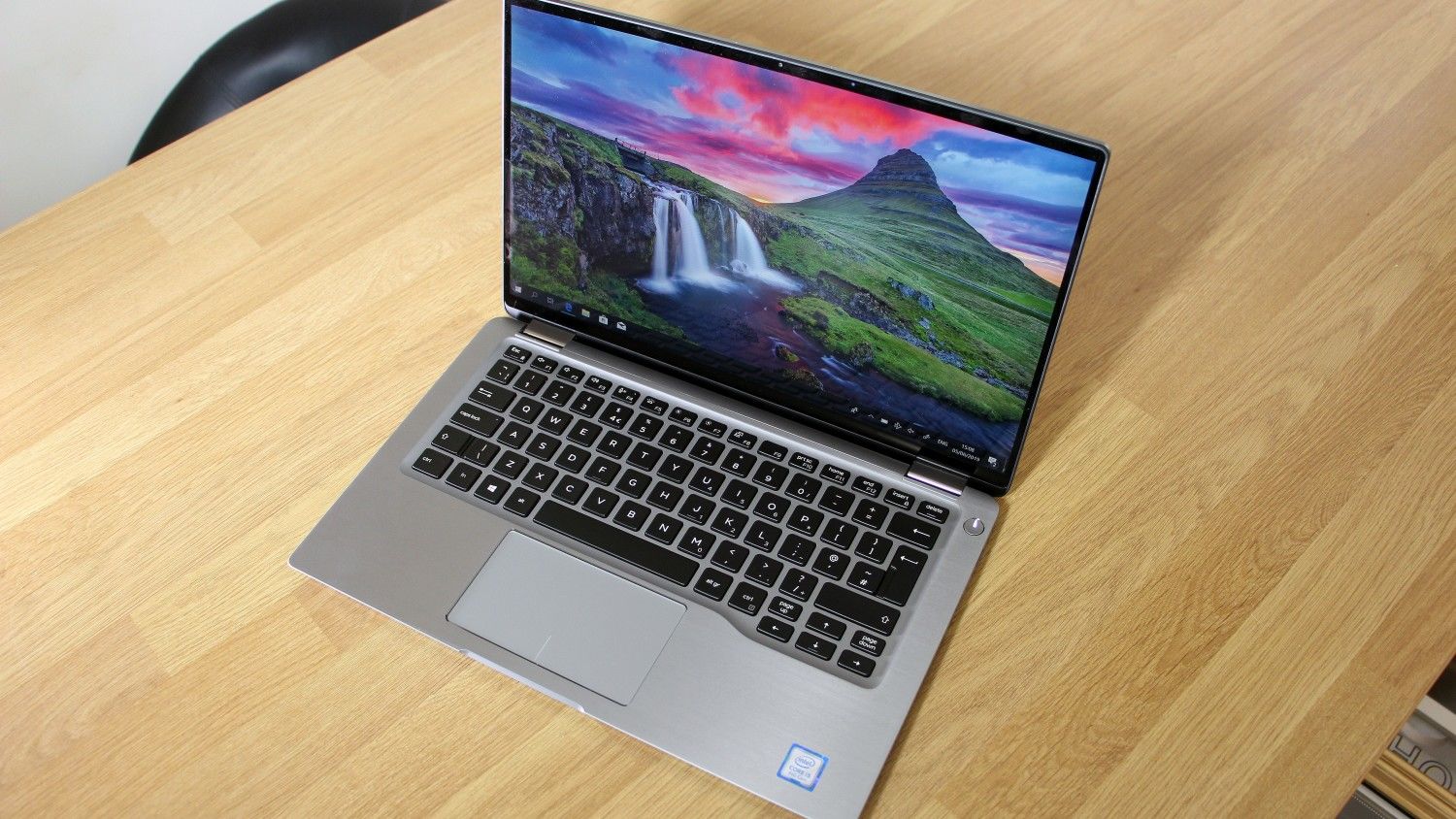 The Dell’s buttons are noticeably smaller, too, and their typing action is soft and hollow when compared to the weighty Lenovo keys. The keyboard is fine, but it doesn’t care.

The trackpad is a little wider than the ThinkPad’s unit – and its surface is precise, with full gesture support. Its in-built buttons are just as responsive as those on the Lenovo. However, Dell’s machine doesn’t have a touchpoint.

The Dell’s 1080p touchscreen that has superb colour quality, and the screen offers good precision when used with fingers or with Dell’s Active Pen accessory. The panel’s Delta E of 0.97 is one of the best on the market, and the colour temperature of 6,182K is good – a little bit warm, but not wayward enough to cause issues.

The panel has impressive uniformity and renders 99.7% of the sRGB colour gamut, which is an excellent result. Then there’s a great black point of 0.12cd/m2, which means that darker areas have excellent depth, and the screen’s contrast ratio of 1,766:1 is fantastic – a result that delivers huge punch and vibrancy.

The Dell’s biggest issue is brightness level of just 212cd/m2. That’s low – poorer than most business notebooks and even some cheaper non-business focussed models. It’s not an issue in the office, but it means that it’s tricky to use this panel outdoors. 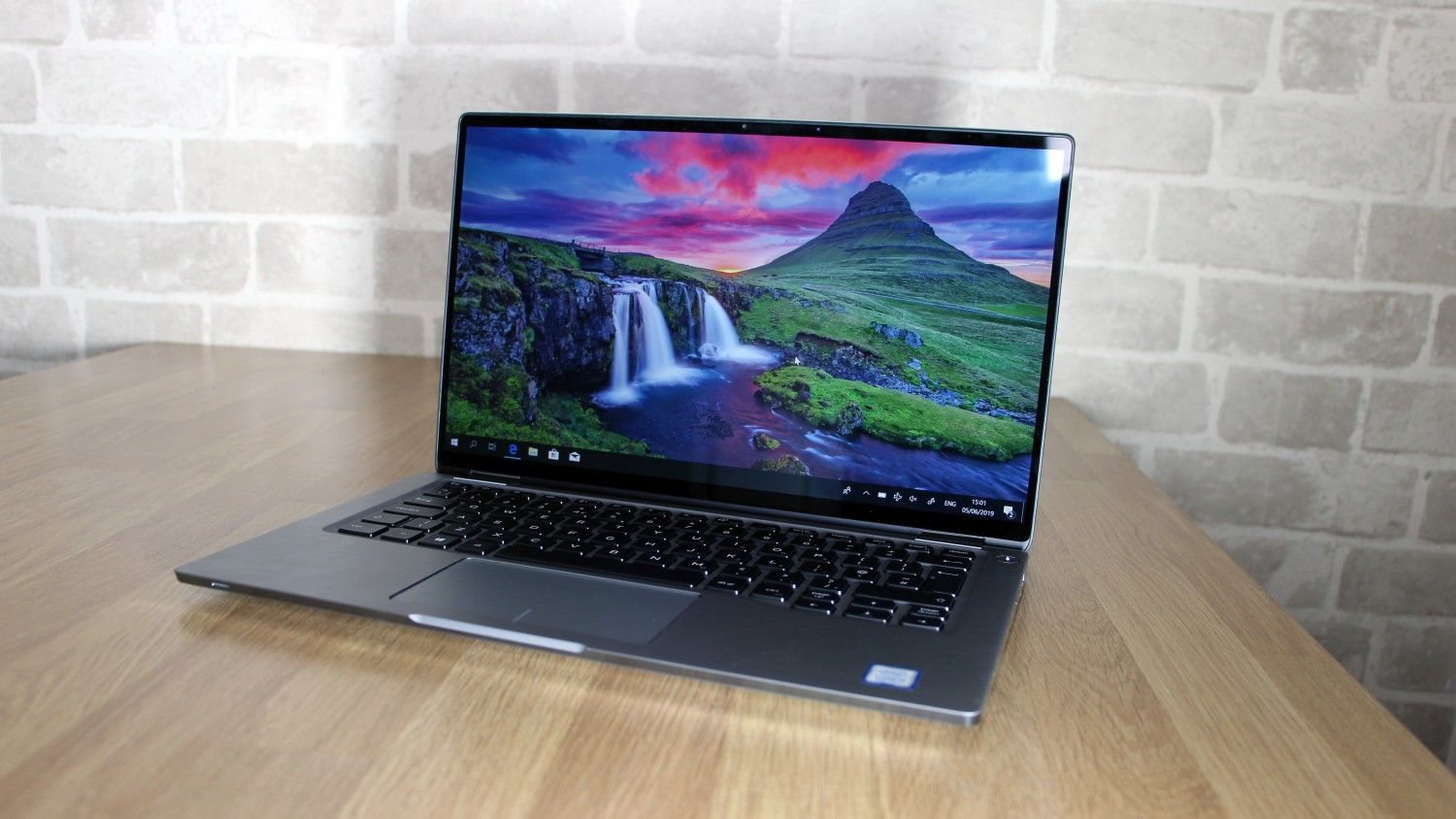 Still, there’s lots to like about this screen. Its colour accuracy and black point are better than the X1 Carbon, and the lack of brightness won’t be an issue if you’re working indoors. Leovo’s 4K panel only fights back with better brightness and more pixels, but the 4K panel is far from essential for many tasks and 1080p panels are far better for battery life anyway.

If you’re indoors, then, Dell’s screen has fantastic colours and contrast. That makes the Latitude’s panel great for design work and photo-editing, even if its 1080p resolution means that it’s not quite as crisp as some.

The speakers are good, too; there’s no real bass here, but Dell’s audio kit is a bit crisp and clear – so it’s fine for casual music and media duties.

We’ve tested the chepest model here so it comes with a middling set of specs. The Core i5-8265U has four cores that support eight threads, just like the Lenovo’s Core i7 chip, but it has clock speeds of 1.6GHz and 3.9GHz – speeds that are lower than the Core i7 part.

The rest of the Dell’s components are a step down, with 8GB of memory rather than 16GB and a 256GB SSD that offers half the space of the ThinkPad’s drive. 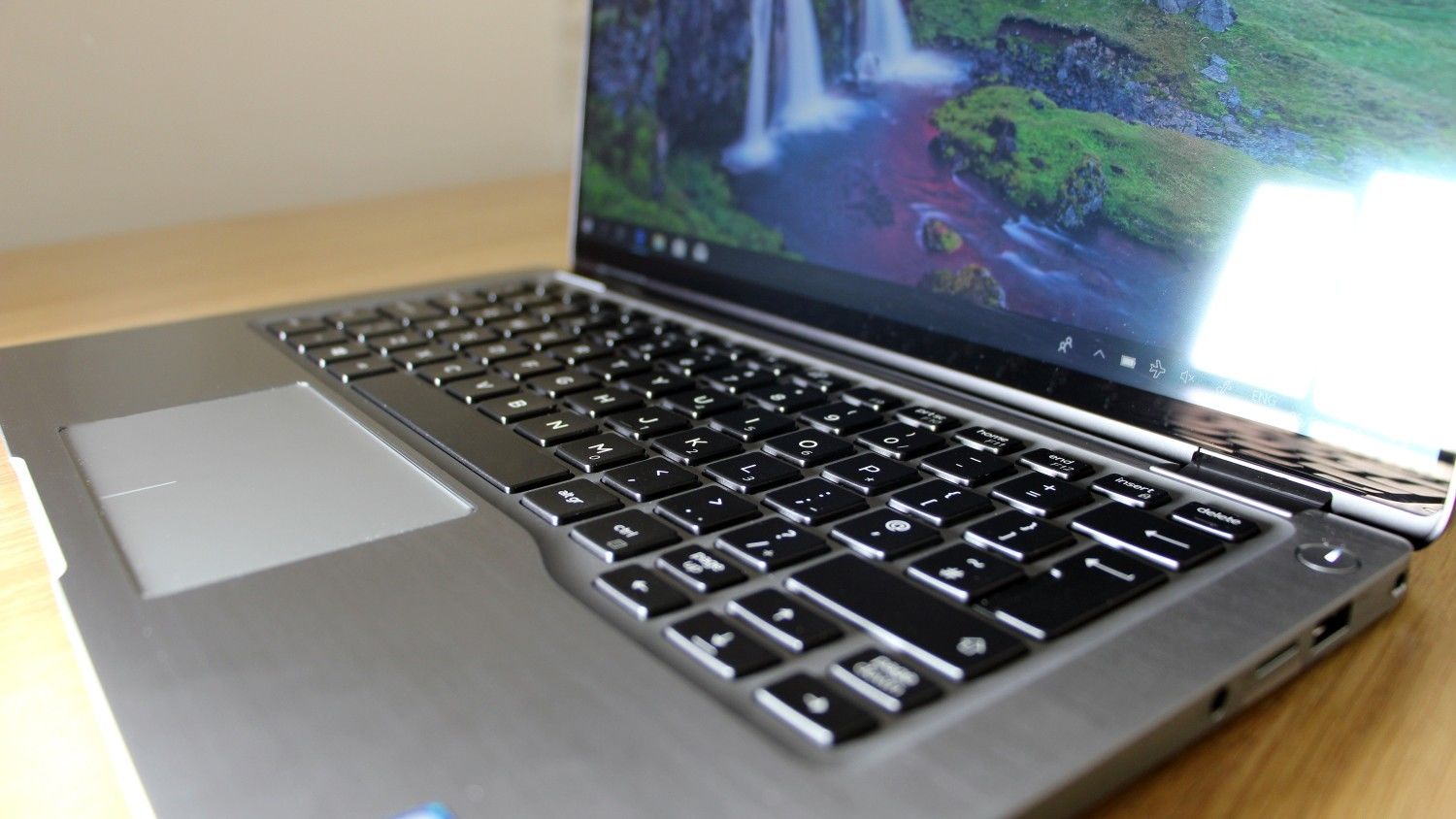 Understandably, the Dell can’t compete with the Lenovo in benchmarks considering the price difference. Its Geekbench results of 4,413 and 14,784 are a little slower, and in PC Mark 10 the Dell scored 3,684– a couple of hundred points back.

Both machines use Intel’s integrated UHD Graphics 620 GPU, and in 3D Mark Sky Diver the Latitude’s result of 4,751 is marginally slower. The Dell does lag behind the Lenovo, but not by much. There’s still enough grunt here to handle day-to-day Office applications and web browsers, and it’ll run modest photo-editing tools too – a boon for the touchscreen.

Here are the benchmark results compared to the ThinkPad X1 Carbon and some regular (often cheaper) consumer laptops, like the Surface Laptop 3, for context.

Try to run lots of apps at once and the Latitude will struggle, though, and it’ll be a little slower than the Lenovo in lots of work applications. It’s generally not quite as responsive when booting, loading and saving, either, because the Dell’s SSD read and write speeds of 1408MB/s and 236MB/s are only average.

The Dell wasn’t quite as good as the Lenovo in thermal tests, either. When the whole CPU and a single core was stress-tested the CPU ran at 1.7GHz and 2GHz – both speeds which are behind the Lenovo in the same tests. The Dell’s CPU was hotter, too; its peak temperature of 100°C was seven degrees higher than the Lenovo.

During a CPU and integrated GPU stress-test the Dell’s underside became uncomfortably hot. It’s a rare situation and the exterior never warmed up during a CPU test, but the Latitude is toastier than the Lenovo.

The Dell’s weaker CPU and lesser screen resolution contribute to stunning battery life. In our movie-playback test the Latitude lasted for more than 16 hours, and it lasted for nearly nine hours in a work benchmark.

That former result is more than twice as good as the Lenovo, and the latter result is about half an hour better. It means that you’re easily going to manage a full work day using this machine – and maybe even two if you’re careful. 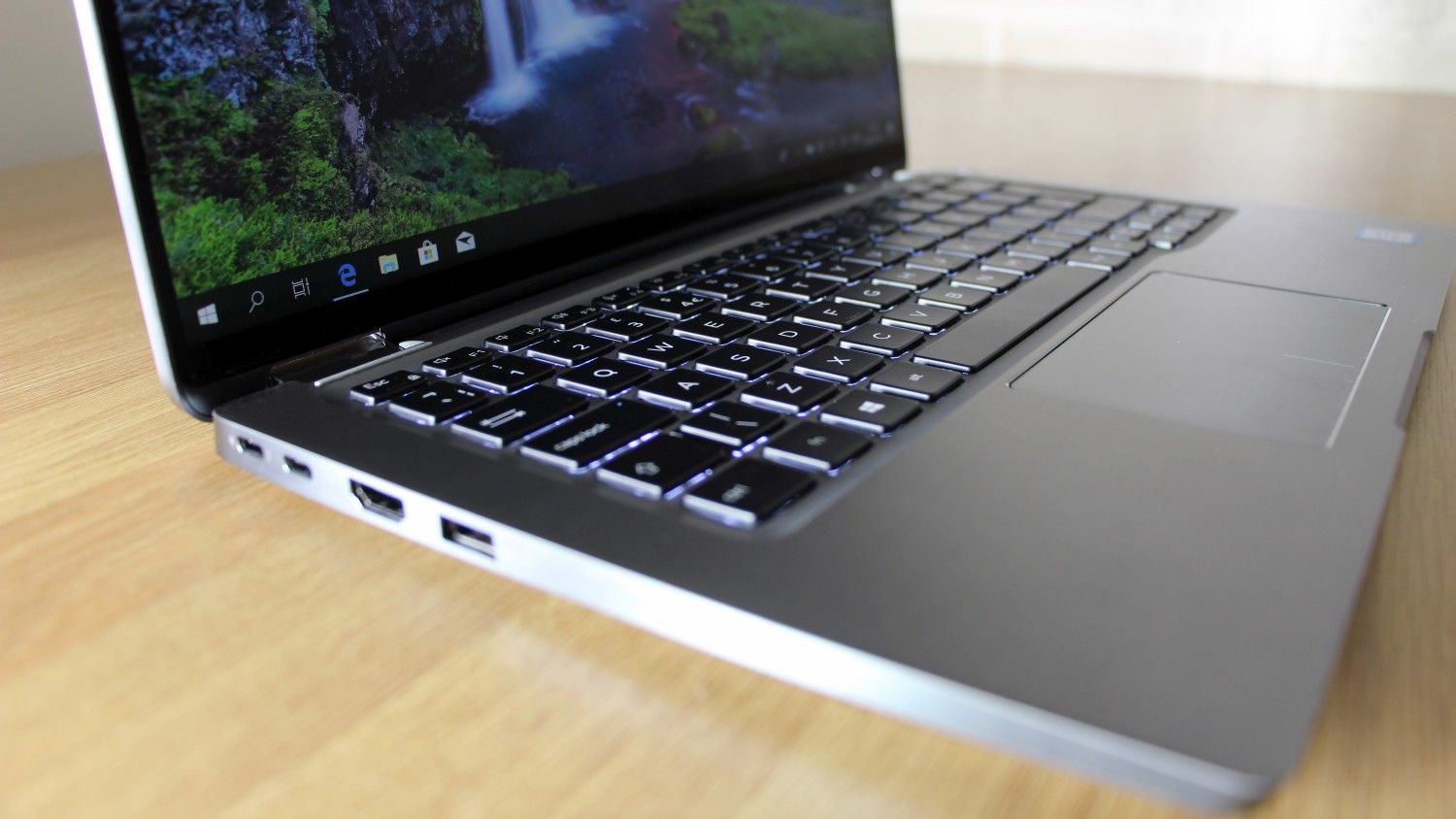 Lenovo’s machine is behind, especially in that media test, because it’s got a 4K screen and a Core i7 CPU. If you dropped the Lenovo’s 4K screen and opt for a Core i5 chip then the two systems will have competing longevity thanks to their similar battery capacities. The Dell does have a marginally bigger battery, though, so it’s the better choice if lifespan is key.

Similarly, it’s a superior option if you want a hybrid machine for tablet and laptop use – or if you just want something that looks more stylish than the ThinkPad.

However, the Latitude falls behind elsewhere. Its keyboard and trackpad aren’t as good as the ThinkPad’s hardware, and Dell’s machine has marginally weaker build quality while being a little heavier. Its connectivity isn’t quite as broad, and the Latitude doesn’t always better value, especially when you start experimenting with screen resolutions and system specifications.

The Dell Latitude looks the part, has a great screen and has a decent range of business features- and battery life is excellent. However, this stylish system doesn’t have quite as much office substance as the ThinkPad.