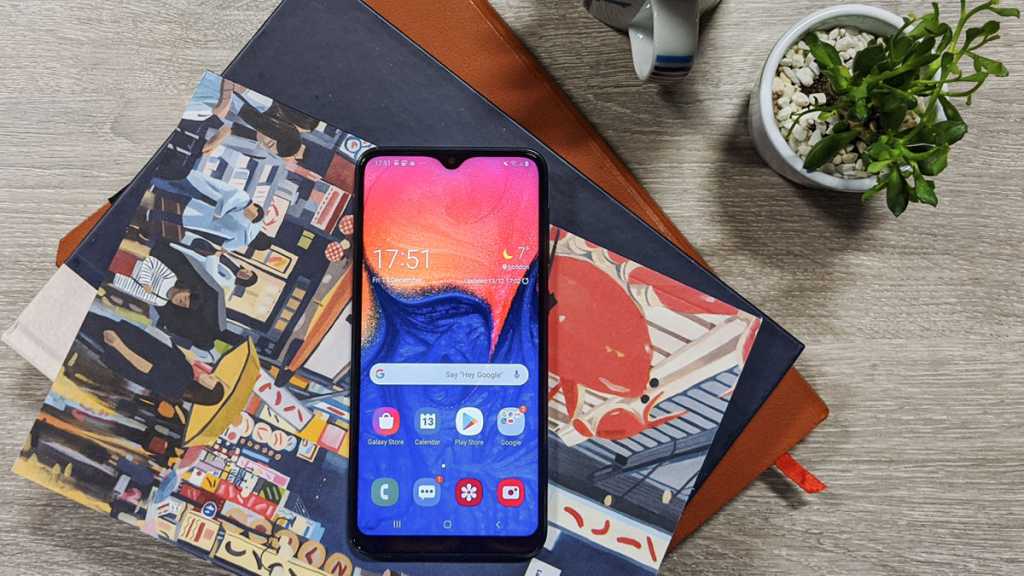 Samsung’s done well to distil many of the same experiences from its more premium smartphones down into something as affordable as the Galaxy A10. That said, aggressive new competition in the budget phone space from Chinese rivals and the likes of Motorola mean you should think twice before dropping £140 on this particular member of Samsung’s A-Series, even if it seems like a steal at first glance.

This year’s Samsung Galaxy A-Series is arguably the company’s most diverse lineup of smartphones to date. At one end, you have flagship-class features like the ones found on the Galaxy A90 5G, while the other serves up impressive affordability, in the likes of the humble Galaxy A10.

The baby of the current bunch, the A10, doesn’t have the same design flair or photographic feature-set of its numerically-superior A-series siblings but it still manages to distil down that Galaxy DNA into a sub £140 device.

Samsung continues to square off against Apple in the flagship space but it’s the growing number of Chinese brands now present at the budget end of the market that the company needs to watch out for.

Companies like Oppo, Xiaomi and Realme are all pushing into what were previously Samsung strongholds with equally affordable phones that deliver experiences beyond anything you’d expect for the price.

Depending on where you’re looking to pick up the phone, it comes with varying amounts of internal storage and RAM, which affects pricing. In the UK you’re most likely to encounter the base model, with 32GB of internal storage (plus microSD expandability) and 2GB of RAM.

Our review sample was provided by Carphone Warehouse which offers the A10 on both PAYG and Pay Monthly plans, with the former costing £139.99 and the latter starting at £11.99 a month, with zero upfront cost.

You can also pick it up from Samsung directly, as well as the likes of Amazon.

‘Functional’ springs to mind when looking at the Galaxy A10’s form. It’s not all that surprising that, at such a price point, Samsung’s simplest A-series device doesn’t exactly stretch its legs in the design department. A chromed accent here or some more dynamic colourways there wouldn’t have done its appearance any harm, though.

While even the humble black Galaxy A50 is elevated by an eye-catching holographic top-coat, the A10 opts for simpler block colours, rendered in shiny, fingerprint and scuff-prone plastic. Depending on where you pick the phone up, you might be able to land the more adventurous red hue, otherwise, your options fall to a conservative dark blue or the mainstay black option – although in this case, the phone is closer to a dark gunmetal grey when the light hits it. 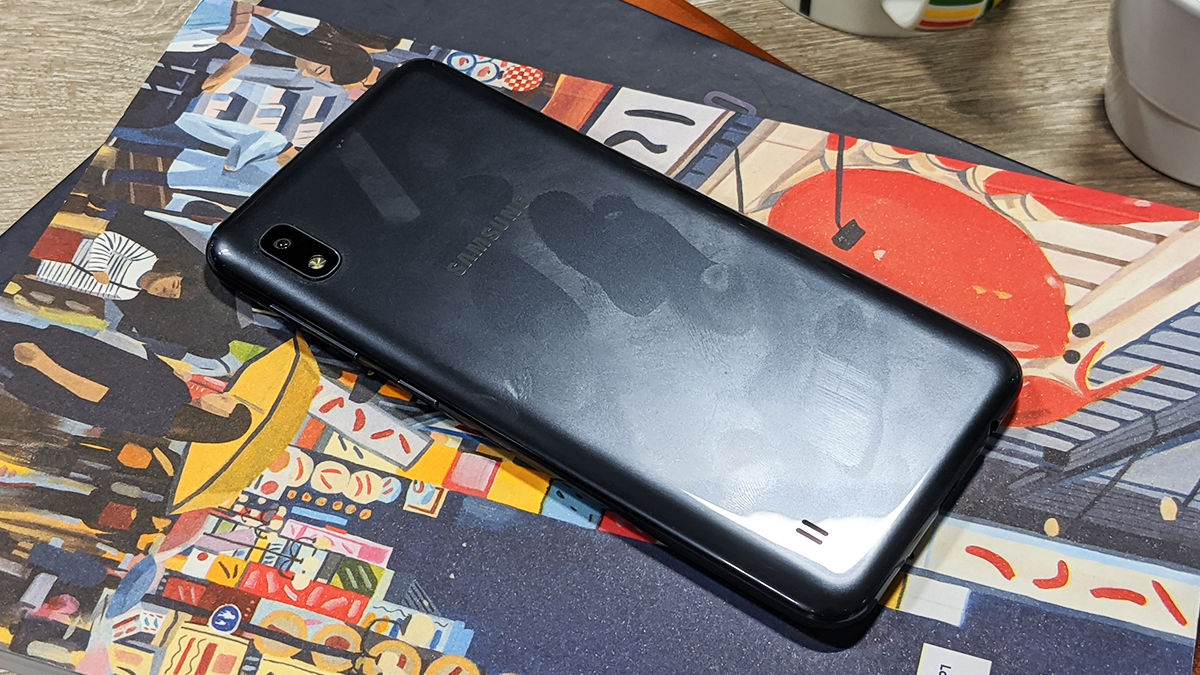 Despite the use of polycarbonate instead of glass (the standard for most phones below the £200-mark), the A10 does, at least, feel solidly built. The wraparound unibody features cut-outs for the standard assortment of plastic hardware controls on the right side, as well as ports along the bottom edge; while the display protrudes slightly, in such a way that the A10 looks and feels slimmer than it actually is.

While USB-C is now commonplace, this budget Galaxy still sports a now ageing microUSB port. It’s a minor annoyance if you’ve enjoyed the reversible convenience of newer Type-C connections, but if not, chances are, you’ll have plenty of compatible cables floating still around, making finding somewhere to charge up a doddle.

One vestigial that we are happy to see endure on the bottom edge of the A10 is the classic 3.5mm headphone jack. In some markets, Samsung even throws wired headphones in-box and with an FM radio onboard, getting to some good tunes is arguably far more accessible than it is on pricier handsets that either don’t include earbuds or a headphone jack natively.

The pop-out tray on the phone’s left side also accommodates either one or two nanoSIM cards (depending on the version of A10 you’ve opted for) as well as a microSD card, if you have one (up to 512GB).

One of the most premium aspects of the A10 has to be the display; not so much as a result of its resolution or the choice of panel Samsung has used, but in its integration into the phone’s design as a whole.

The bezels surrounding the top and sides of the phone’s 6.2in, 19:9 aspect ratio screen are pleasingly thin, comparable to the likes of an iPhone 11 in this regard. 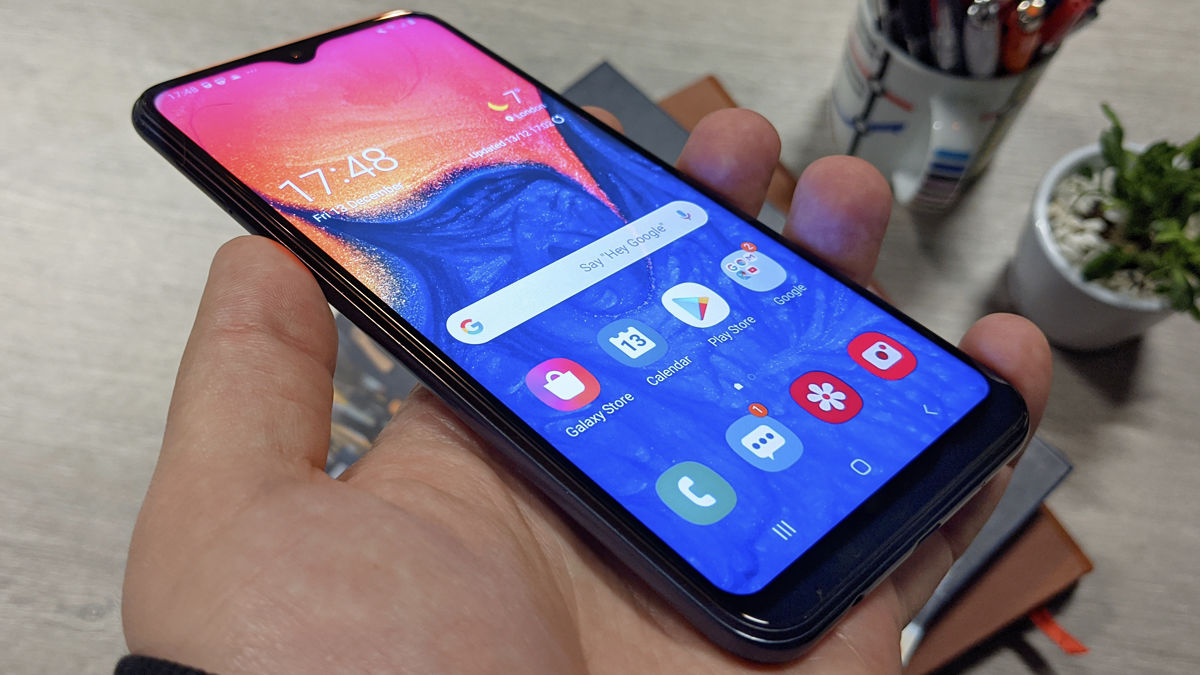 What Samsung calls an ‘Infinity-V’ display really refers to the shape of the notch at play here and like the OnePlus 6T, the A10 features a nicely rounded, but not-too-obtrusive, dewdrop notch, which itself houses the phone’s single 5MP front-facing camera and the phone’s earpiece.

Most other phones around this price point tend to feature a less elegant alternative, similar to the one found on Samsung’s own Infinity-U displays. The A10 does also have a slightly thicker ‘chin’ of bezel compared to the top and side edges of the display’s surround, but this too still appears to be slimmer than the phone’s most closely-priced rivals.

As for the panel itself, Samsung has opted for an extended HD+ TFT LCD. It impresses with its viewing angles, while its sheer size also renders the A10 a great phone for enjoying media on a budget. A one-handed mode does also feature, so it’s easy enough to use, should you not have both hands free.

The lower-than-average resolution is noticeable, but not to any hugely detrimental effect – individual pixels are only just discernible and the screen is still more up to the task of displaying fine image detail and text, even if it lacks the crispness of the more senior members of the A-Series.

The phone’s Night mode switches various elements of the interface’s theme from light to dark to make viewing easier; a feature which can be controlled manually or automated based on sunrise and sunset. Dark mode is native to the latest Android 10, which the A10 still lacks, so the fact this feature still appears here is doubly appreciated.

The phone’s display settings do also include a blue light filter, which helps with viewing content in low light or late at night but it’s one of the most rudimentary implementations of the technology we’ve seen. You can toggle it on or off from the phone’s quick settings menu but that’s it.

Control over the filter’s intensity, tone and scheduling would all have been appreciated inclusions and it seems strange that Samsung left such functionality out in this instance.

Android 9 is fast-growing long in the tooth and yet the move to Android 10 for Samsung’s most modest Galaxy devices from the past year, is still a ways off.

The company’s own One UI overlay does go some way to reduce the effects of this disparity by bringing features like the aforementioned dark mode, forward. Meanwhile, there’s a consistency from the humble A10 right up to the Note 10+ that helps unify the user experience, irrespective of the hardware on offer across Samsung’s many smartphones. 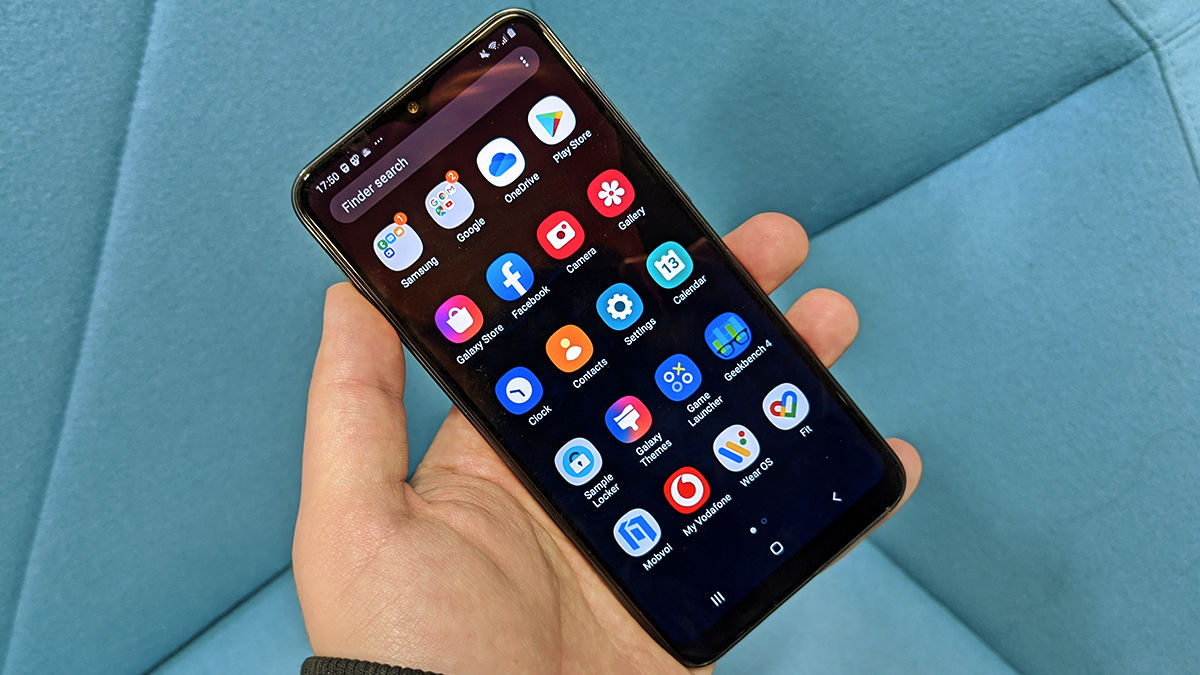 Moving around the A10’s OS is a clean and gesture-driven experience, making one-handed navigation easy, even without needing to shrink the UI down. Standout features that differ from stock Android include the ability to run multiple instances of select apps like Messenger or WhatsApp – particularly useful for those who like to keep work and personal worlds separate.

The Galaxy Store does double-up on offerings from the Play Store, but some might find value in it thanks to exclusive discounts or deals, as well as access to phone customisation; from fonts and wallpapers to full system-wide downloadable themes.

Gamers may also appreciate the inclusion of Samsung’s Game Launcher. Not only does this software collate all the games installed on the A10 into one place, but it also spits out stats based on playtime, rankings relative to other players and friends, and makes recommendations on new titles you might like.

As an offshoot, Game Booster then steps in during gameplay to manage aspects like device temperature and available memory to offer an optimised experience. In truth, being able to feel some of these benefits isn’t easy, but certain features should hold tangible value for a lot of players.

Nowhere does the budget nature of phones like the Galaxy A10 manifest more prominently than with the camera setup. The A10 sports a conservative photographic arrangement considering the many-sensored phones now permeating the market; with its single 13MP primary snapper and a 5MP front-facer. 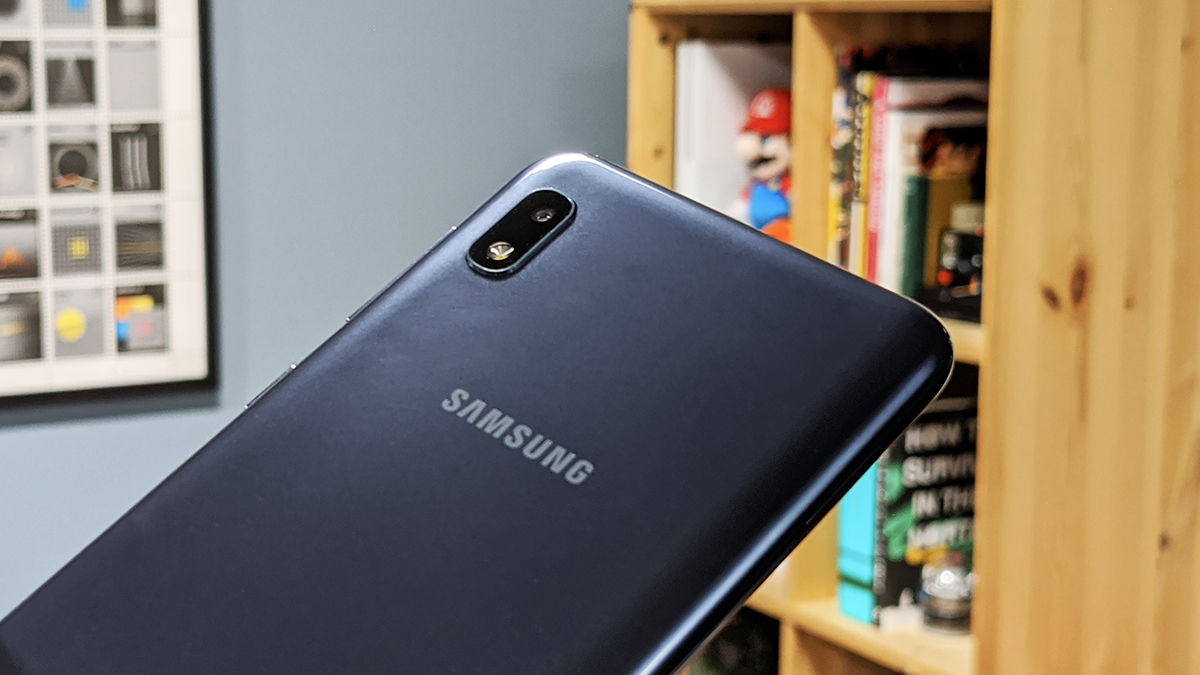 When shooting with the main camera, photos are captured with HDR (high dynamic range) enabled by default, or so the phone says. In actuality, it looks like dynamic range is one of the A10’s camera’s biggest weaknesses.

In bright scenarios, darker areas are crushed to flat black all too easily, while night time shooting suffers from the opposite problem; that’s before you acknowledge that image quality falls off a cliff, succumbing to grain and severe detail loss in such situations too. 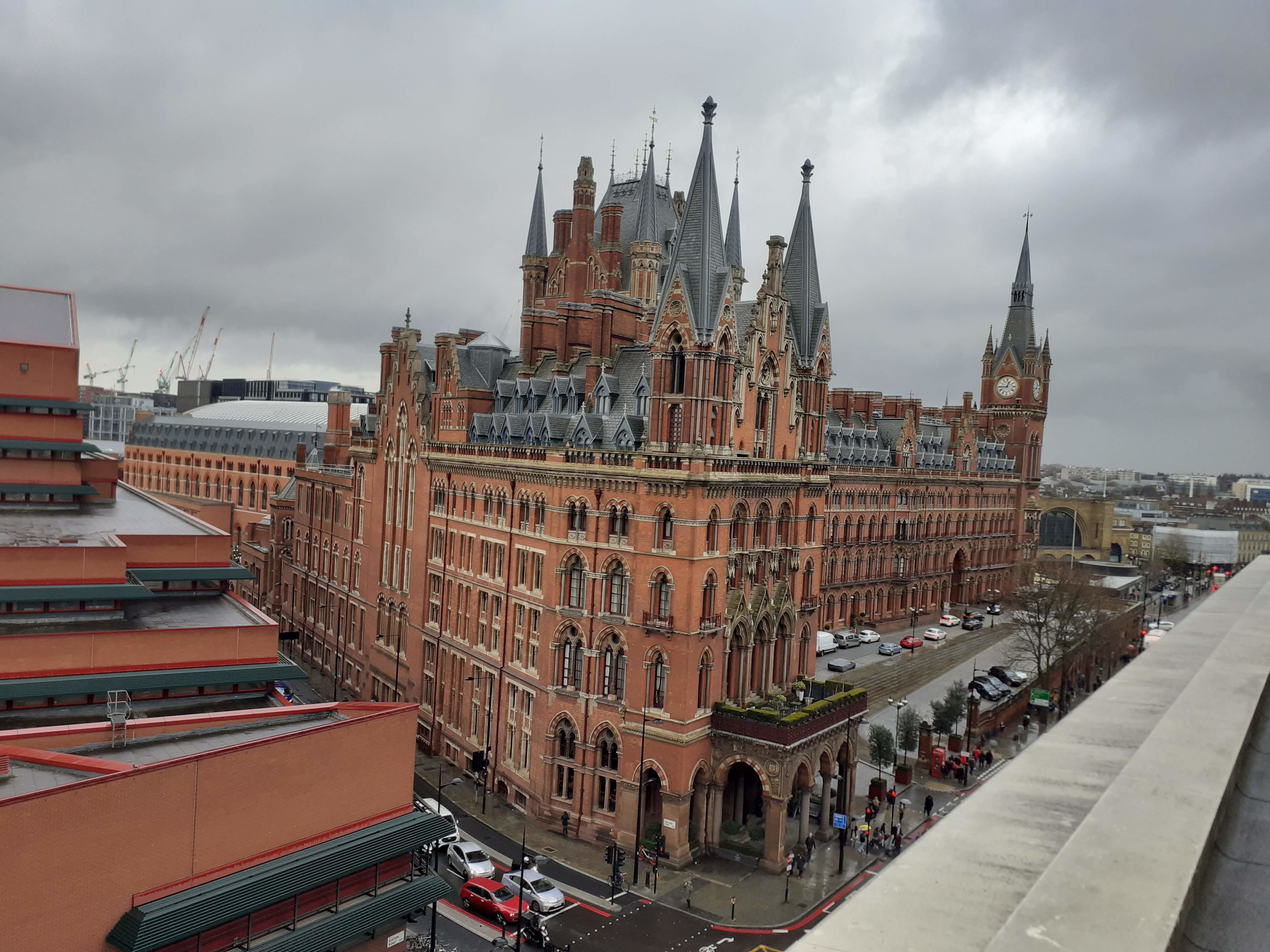 There are manual controls on-hand (under the ‘Pro’ setting) to grant you some chance of recovering from shooting in more challenging conditions, but they only fall to white balance, ISO and exposure adjustment – no focus or shutter speed options present themselves. 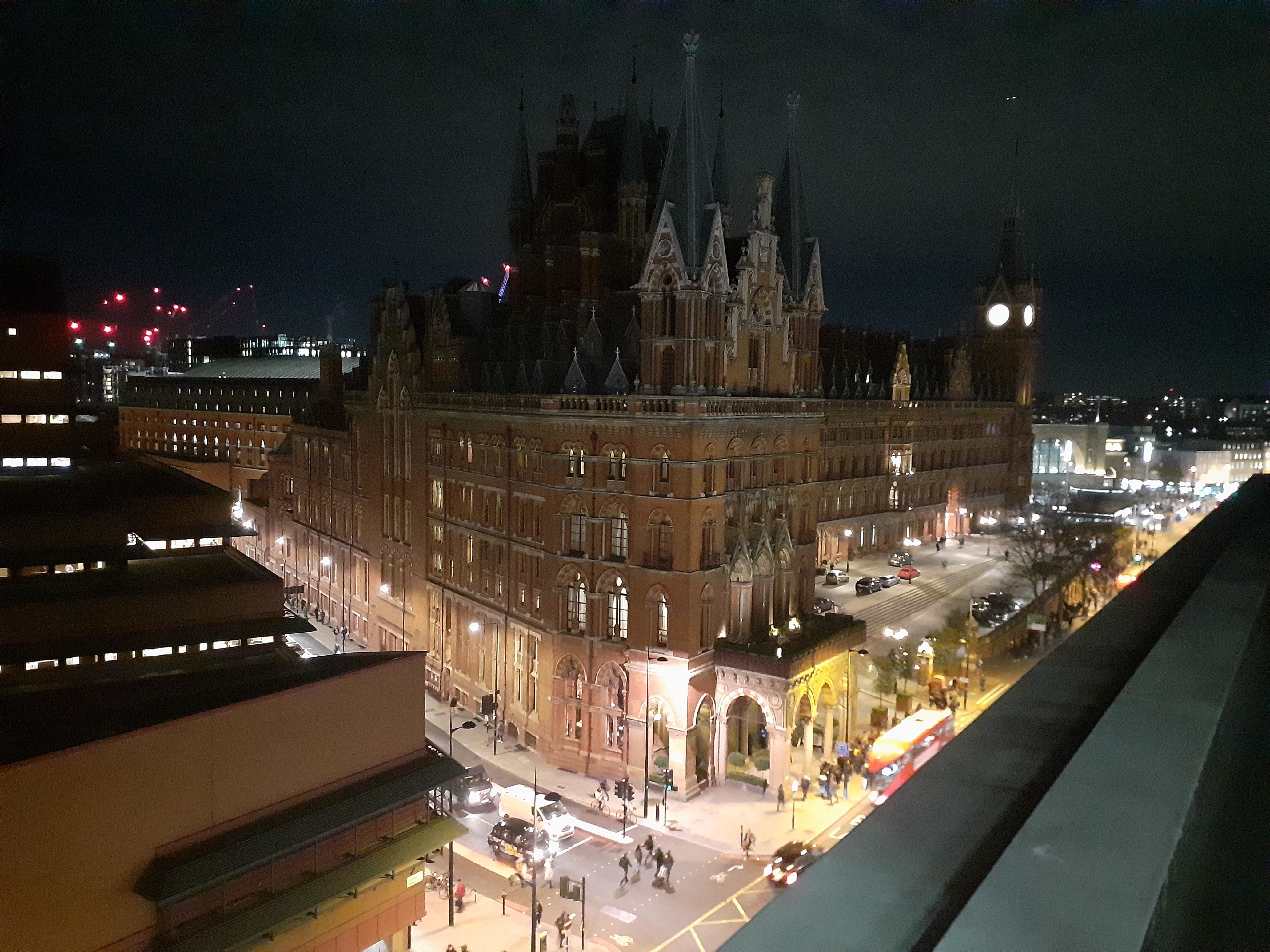 The A10’s camera works best in bright, neutral lighting – anything else and while shots might remain usable, the shortcomings of the imaging hardware will present themselves in obvious ways.

The heart of the Galaxy A10 takes the form of the company’s own Exynos 7884B SoC; in this instance, paired with 2GB of RAM.

Generally speaking, there’s little to scoff at with regards to the mid-range chip at play here (unless you’re looking for decent gaming on the go), it’s the memory that throws up concerns. 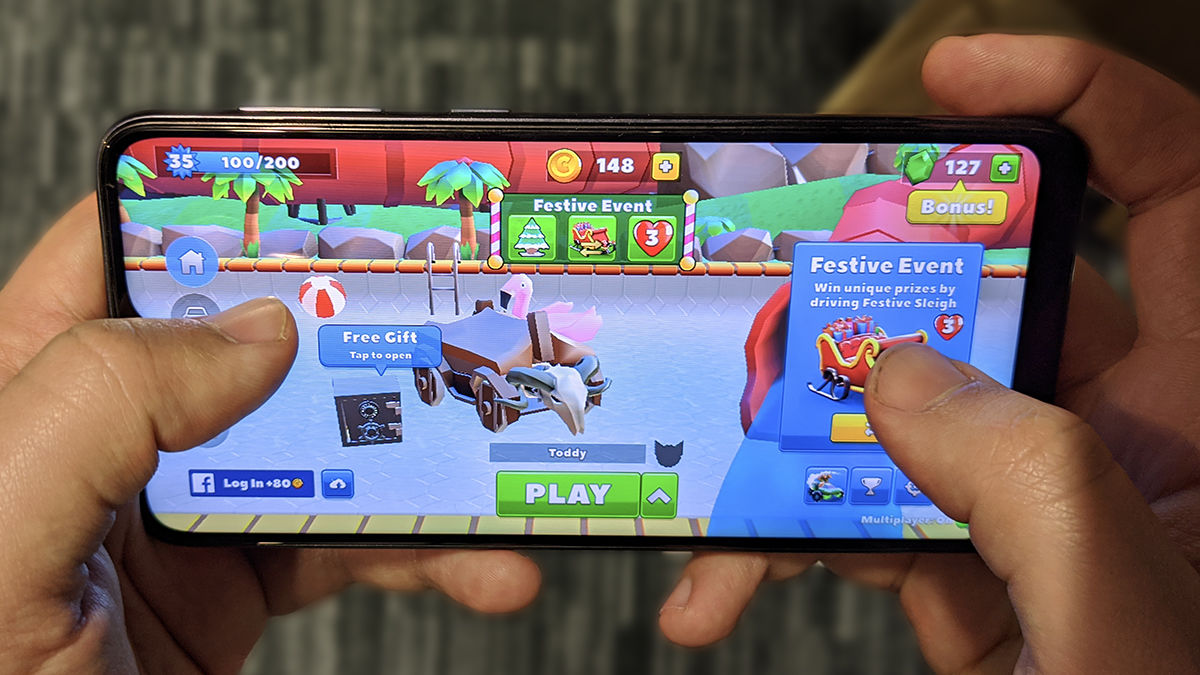 While swiping around the interface seldom seems problematic, there’s a notable pause every time you open or close an app or switch between apps. Tapping certain UI elements and typing also feels sluggish to a fairly consistent degree.

As for gaming, so long as you’re not playing games at too high a fidelity or that require instant reactions (such a PUBG Mobile), the A10 can handle rich titles with 3D graphics. As echoed by its lacklustre benchmarking scores (some of the lowest we’ve seen from a 2019 phone), expect games to remain playable, even if they do drop a few frames from time to time.

The other side of the coin is longevity and the Galaxy A10’s 3400mAh cell actually holds up well in testing, doling out just over seven hours of screen-on time. The humble components at work mean the A10 should get you through a full day without issue, which is particularly important as this phone forgoes fast charging altogether.

30 minutes of charge will get you just over 21% in the tank – enough for a couple of hours of use but not much more, so bear that in mind if you’re not one to plug your phone in every night.

There’s a lot that can slide when you’re getting a full smartphone experience for under £140. Samsung has done a good job of bringing its One UI user experience to the low-level hardware inside the Galaxy A10 and, as mentioned, that 6.2in display will appeal to Netflix and YouTube junkies. 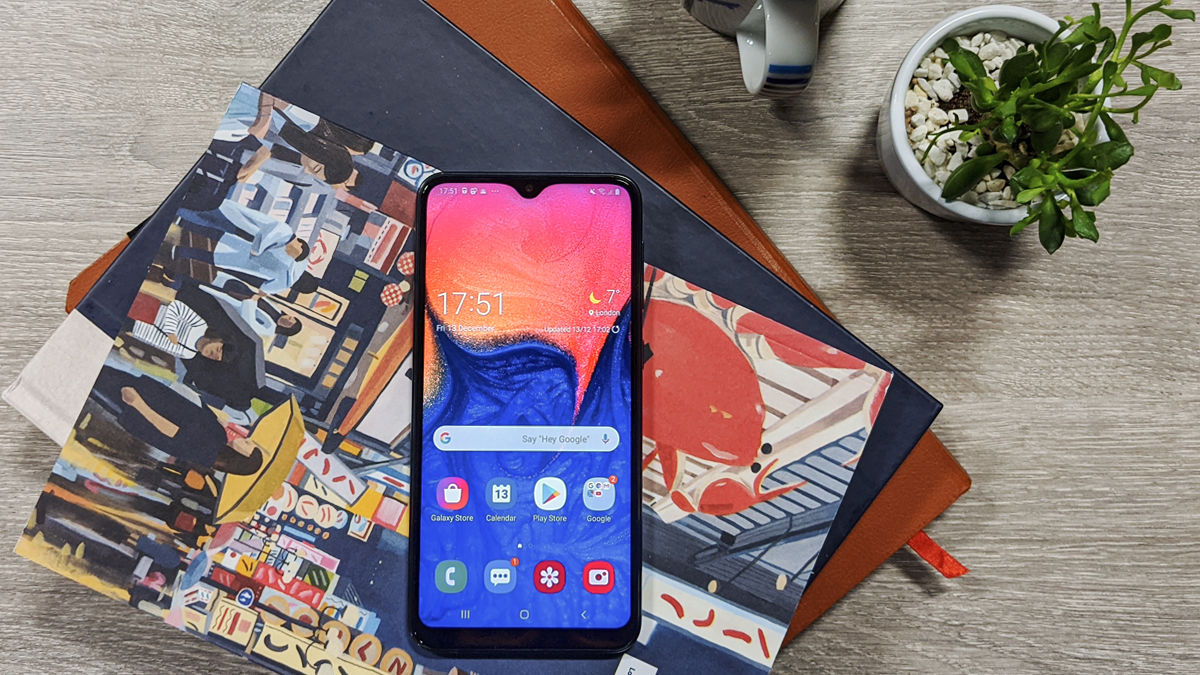 Beyond that there’s not a lot the phone can really shout about – the camera is functional, as is battery life, while the design is uninspiring.

For your money, rival devices from the likes of Motorola and Xiaomi (namely the Moto G7 Play and G7 Power as well as the Redmi 7), might be better purchases; with higher resolution cameras, in some cases more cameras and bigger batteries, along with more interesting designs.