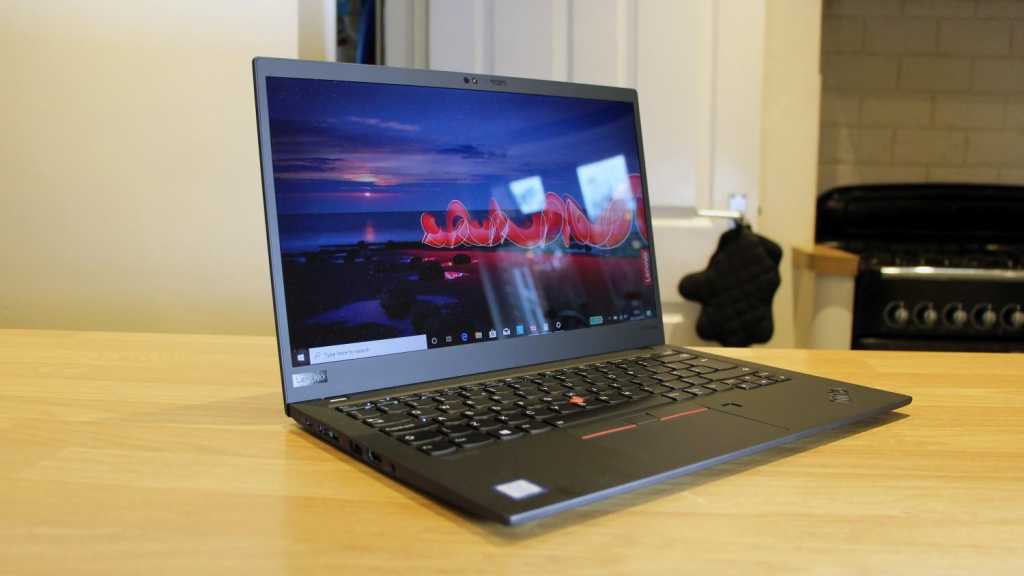 There are no bigger names in business laptops than the Lenovo ThinkPad, and the X1 Carbon is the firm’s current flagship – so a big reputation and plenty of cash rides on its annual refreshes.

This machine is the seventh iteration of the Carbon laptop, and Lenovo has made notable improvements while retaining much of the ThinkPad’s famous design.

Can this machine retain its prominence in a busy market – and justify its lofty UK and US prices?

As ever, Lenovo allows specifications to be customised and makes loads of alternative options available. Some models are available at Amazon and eBuyer in the UK.

Three models can be customised, with base specifications that range between £1,296 and £2,016. They have Core i5 and i7 CPUs, different memory and storage configurations and 1080p and 1440p screens, but not the 4K panel.

US buyers can choose from models that range between $1,149 and $3,659. There’s more versatility here: Intel 10th-gen CPUs are available as well as 8th-gen parts, and two of the pricier machines have the 4K panel. A full range of customisation options are also available.

There are no big surprises here: the Carbon still looks like a ThinkPad. There’s the familiar logo on the lid and the wrist-rest, and the machine is hewn from magnesium alloy with a soft-touch finish.

This model has one of Lenovo’s new options – a carbon-fibre lid. It’s a subtle effect that looks good, and it’s only available with 4K variants.

The Carbon retains the classic look of a ThinkPad while being slim and light. This seventh-generation machine weighs 1.1kg and is 15mm thick. That’s impressive, and it means that this system is lighter than its key rival – the Dell Latitude 7400 2-in-1.

The ThinkPad is MIL-STD tested to withstand extreme temperatures alongside water and dust ingress, and build quality is rock-solid – easily strong enough to be tossed into a bag for the morning commute. It’s a little more robust than the Dell.

The ThinkPad is very practical too. It has two full-size USB 3.1 ports and two Thunderbolt 3 connectors that support USB Type-C. It’s got an HDMI output and a Kensington Lock slot, and on the inside there’s dual-band 802.11ac wireless and Bluetooth 5.0

Elsewhere, the ThinkPad has a fingerprint reader and a vTPM chip, and the webcam has been upgraded with IR and a physical shutter. This model has an optional LTE 4G modem, with the SIM slot installed on the rear. It doesn’t have a micro-SD slot, which the Dell does include.

Despite that, though, the Lenovo takes a slight lead with connectivity. More of Lenovo’s base models include the 4G modem and the fingerprint reader as standard, and you don’t have to fill a USB port to use Gigabit Ethernet on the Lenovo – there’s a special adapter.

ThinkPads have always had fantastic keyboards, and that remains true here.

The Carbon’s buttons have 1.6mm of travel – a tiny bit more than most laptops – and they require more force to push down than most rivals. The buttons have a tactile bump in their action, and the top of each button has a concave design.

The keyboard feels solid and significant: the buttons are consistent and comfortable, with more weight than the shallower, softer buttons installed on virtually every rival – including the Dell.

As usual, this ThinkPad has a conventional touchpad alongside the famous touchpoint and its accompanying buttons.
The pad is great, with Windows Precision support, and its in-built buttons are fine – a little soft and deep, perhaps, but that’s the only minor issue.

The touchpoint is very precise – a welcome addition for working in cramped environments.

The ThinkPad is sold with touch and non-touch 1080p screens, a 1440p unit and a 4K panel. Our review sample includes the latter screen.

The 14in 4K screen serves up a density level of 315ppi. That’s tremendous: pin-sharp, with the detail levels required for high-end photo work and a huge amount of on-screen space.

Testing reveals that the 4K panel is a little inconsistent. Its brightness level of 486cd/m2 is great: better than virtually every other laptop, and is high enough to cope with bright office lights and outdoor use.

It’s also high enough to support DisplayHDR 400 content, although this modest HDR protocol only delivers a tiny boost to media – so it doesn’t really add value.

The huge brightness is undermined by the black level of 0.45cd/m2. It’s too high, and it means that dark areas only have mediocre depth. The contrast ratio of 1080:1 is fine for day-to-day work and mainstream photo tasks, but it could be better.
The Delta E level of 3.26 is reasonable, but not particularly great – and it lends this panel a noticeable red hue in lighter areas.

Dell’s 1080p panel isn’t as crisp as the Lenovo’s screen, and it’s not as. However, the Dell does have better contrast, black levels and colours – so if those are important, the Latitude is better.

Lenovo’s 4K panel doesn’t include the firm’s PrivacyGuard feature – that’s only available on 1080p models. It’s also worth mentioning that the 4K panel drastically reduces battery life, so only consider this option if you really do need those pixels.
The Lenovo’s speakers are fine for casual media use, but they’re a bit tinny and don’t have much bass.

This ThinkPad relies on Intel’s older 8th-gen CPUs. That’s no surprise – 9th-gen chips only deliver a modest performance boost after all. Intel’s latest 10th-gen CPUs have only just started to appear in US models, but the 8th-gen versions are continuing in the UK for now.

The Core i7-8565U has four cores that can address eight threads, and it runs at 1.8GHz with a Turbo peak of 4.6GHz. It’s paired with 16GB of memory, a 512GB SSD and integrated graphics.

The Lenovo delivered single- and multi-threaded Geekbench results of 4,950 and 15,765. That’s good pace: a few hundred points ahead of the Dell. The Lenovo’s PC Mark 8 result of 3,842 just outpaced the Dell.

The ThinkPad delivered SSD read and write speeds of 3,493MB/s and 2,513MB/s. Again, they were better than the Dell’s results.

It’s enough speed to make Office applications and web-browsing tools run flawlessly, no matter how many apps or tabs you have open, and database applications and mainstream photo-editing apps will run reasonably well too – you’re only going to have a little slowdown. The SSD makes the whole machine feel snappy.

You’ll need more power if you’re running loads of touch apps at once, working with huge files or need to use workstation-level tools. Those who need to work with media should look for laptops with discrete GPUs too.

Here are our benchmark results compared to the Latitude 7400 and a selection of consumer laptops such as the Surface Laptop 3.

The Lenovo is a reasonable thermal performer too, with solid temperatures in almost all situations. The CPU did begin to throttle thanks to a 93°C peak temperature in a stress-test, though, with all-core and single-core revised speeds of 1.9GHz and 2.8GHz.

That’s no surprise considering the ThinkPad’s slim body, but it’s also better than the Dell – that machine had a slower CPU out of the box, was poorer when throttling, and its exterior was sometimes hotter.

Don’t be put off: the Lenovo doesn’t experience issues during short bursts of work and it’s unlikely that anyone will be running the CPU at full pelt for long periods.

Neither result matches the Dell, which lasted for sixteen hours in the film playback test and nearly nine hours in a work test.

The Lenovo suffers due to its 4K screen and Core i7 CPU, but there are options. Dropping the 4K screen will dramatically increase battery life – if you opt for a 1080p panel with a Core i5 CPU you’ll easily make it through a workday and the ThinkPad will last almost as long as the Dell.

The Lenovo ThinkPad X1 Carbon remains an excellent choice for a powerful and portable business laptop.

It’s got the expected combination of top build quality combined with excellent performance and decent features. There’s little to dislike but we don’t think you should punt for this 4K model we tested – even if you lose the carbon fibre lid.

Battery life isn’t great so dropping to a 1080p will help and the image will still be crisp enough for day-to-day tasks unless you need a higher resolution specifically for design work. This will also make the X1 more affordable, even cheaper than some rivals.

Dropping to a Core i5 processor will also save you money and while still provideing enough performance for mainstream tasks.

The X1 Carbon lives up to the ThinkPad’s famous name, just pick the right model.