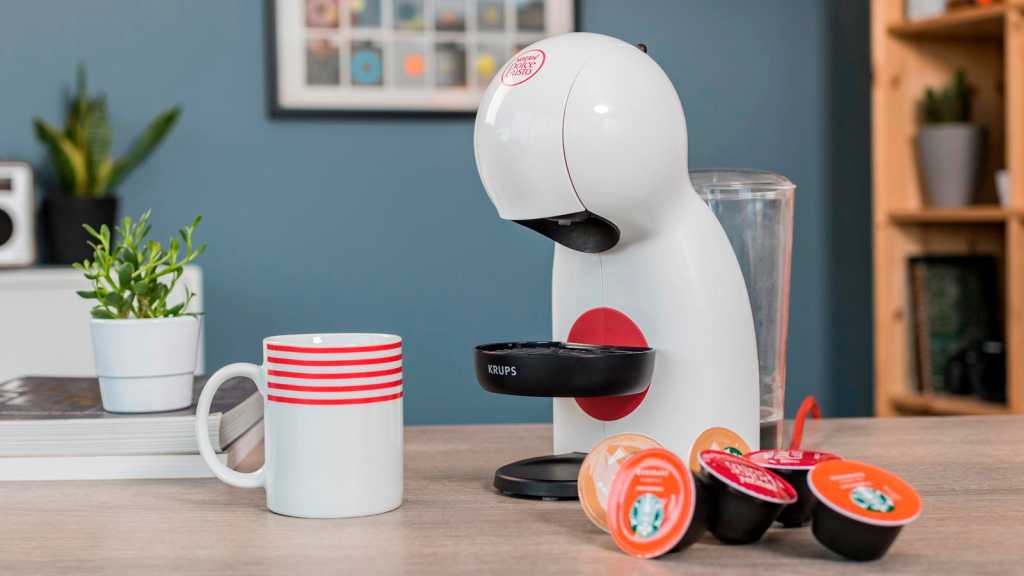 It’s basic, basic, very, very basic. But if you don’t mind a lack of features, then it’s a great little capsule coffee maker at a good price point.

Not currently available in the US

As one of the smallest and simplest capsule coffee makers on the market, the Piccolo XS will fit into any kitchen and can be used to whip up 35 varieties of coffee, chocolate and even tea drinks.

The Piccolo XS is a very reasonably-priced capsule coffee machine. It’s made for both Krups and De’Longhi, with the only difference being the branding on the front of the cup tray, so if you’re looking for the best deal on this machine, make sure you search for both names.

For example, Amazon is selling the Krups-branded version in white for £40.75. It’s also selling the De’Longhi Piccolo XS in white for £58.44. The only difference between these two, apart from the branding, is the contrast colour panel on the front of the coffee maker.

The best price we can find currently for any version of the machine is on Amazon. You can buy the De’Longhi-branded Piccolo XS in black for £37.88. Meanwhile, Argos is selling the Krups-branded machine in black for £44.99.

When you’re considering price, don’t forget to factor in the cost of capsules. Prices vary depending on the flavour of the capsule, where you’re buying it and any current deals. Broadly speaking, it means that a cup of home-brewed coffee will cost between 25p and 60p. The Piccolo can make hot chocolate, with Maltesers or Galaxy pods currently costing about 62p each. It’s also compatible with Starbucks-branded coffee pods.

You’ll easily find a spot for the Piccolo XS in your kitchen. This dinky little coffee maker is only 28cm high, 27cm deep and 14cm wide.

It’s shiny and modern, with a curved silhouette. However, if you’re one to anthropomorphise your gadgets, you might feel that it looks disconcertingly like Wall-E’s Eve having a depressive episode on the countertop (especially in white, the colour of the machine we were given to review). Sensitive souls should take note.

The reservoir and drip tray are simple to remove and fit back in. And the capsules mean that the machine is easy to keep clean. It does drip for a while once you stop the flow of coffee, but that’s it as far as mess goes.

Apart from the general Marvin the Paranoid Android-ness of it, the only design feature we have a real issue with is the red lead, which looks like something that belongs on a power tool, not in the kitchen. 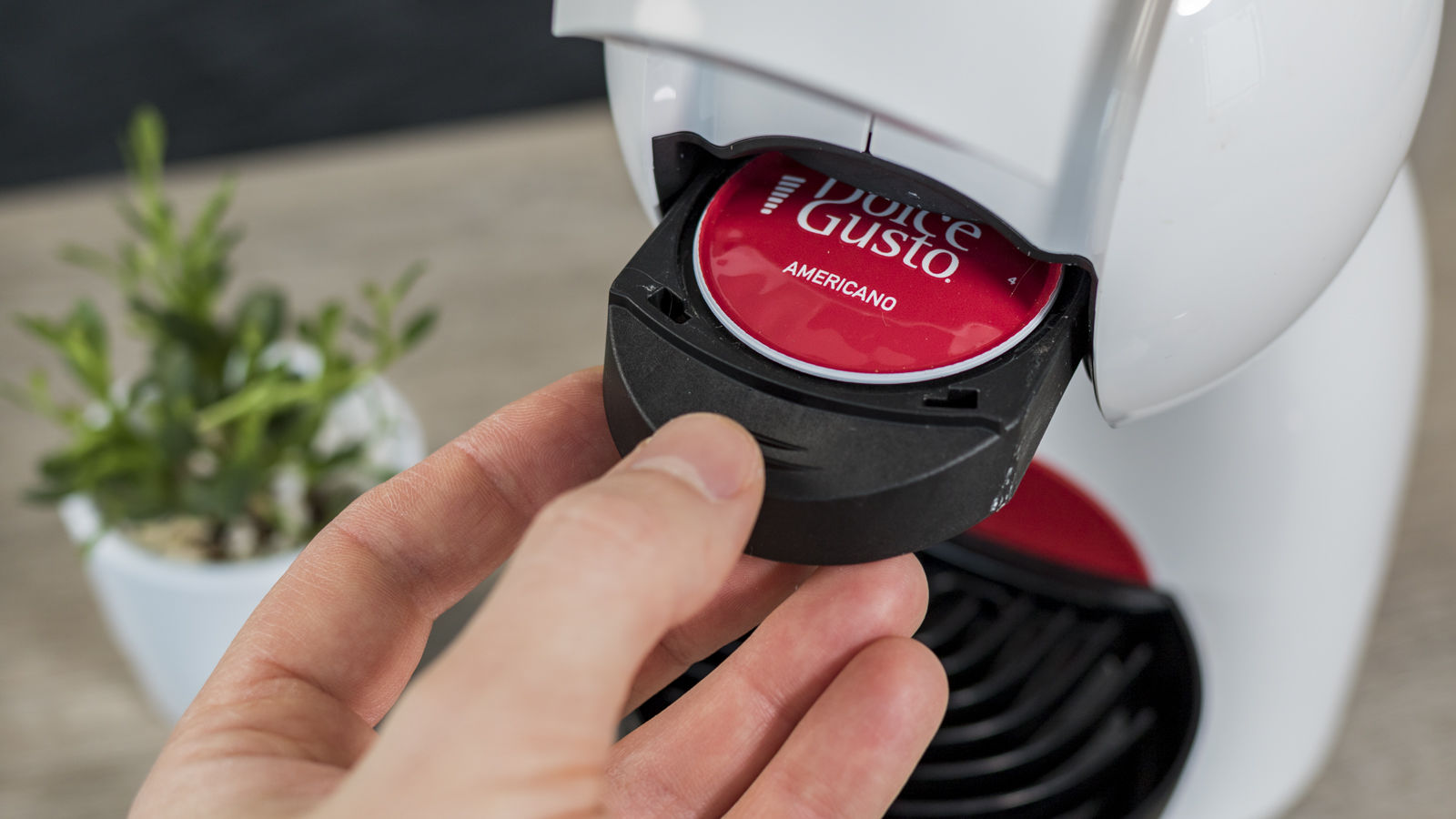 The Piccolo XS is a basic coffee maker. The features are really limited to a hot and cold beverage option.

But if simplicity is what you’re after, the lack of fuss is a feature in itself. It’s incredibly easy to use. Fill the water reservoir, place a cup on the tray, open the capsule drawer, insert a capsule and wait for the red indicator light to turn green.

Once it’s ready to go, flick the lever onto its hot setting and water will flow through the capsule and into your cup.

This is where the lack of functionality may be a problem for some. There’s no automatic timer and no automatic shut-off. You need to stay with the machine, timing the flow of the coffee, and stop it when you think it’s reached an ideal volume and strength.

It took us a couple of tries to get this right but it’s not rocket science. The advantage of the manual brewing system is that you can tailor your coffee to your preferences. The disadvantage is that a 3-second distraction mid-process will leave you with a ruined espresso.

The Piccolo is not a completely silent machine, making a relatively noisy buzzing sound. As its brewing time lasts only 30 seconds, this is not a deal-breaker but it’s something to consider.

We only had one problem with the machine while testing it, which occurred while making a coffee first thing in the morning. (It’s possible that being half-asleep had something to do with it but hey – these are real-life testing conditions.) Water and capsule went in but no coffee came out.

We stopped the process and checked the reservoir and capsule. All was well the second time around, but stopping and starting the process meant that the capsule was pierced twice, creating a hole that coffee leaked from during the successful brewing process.

The Piccolo is compatible with Dolce Gusto and Starbucks-branded coffee capsules, which come in 35 varieties. It doesn’t feature a milk wand for frothing but capsules for beverages that should feature milk do indeed include it, so you can brew lattes, cappuccinos and the like without adding milk separately.

Bear in mind that several of the coffee types (Macchiato, Cappuccino, Chococino) use two capsules. As the Piccolo XS has a single-capsule system, you add one capsule, extract the coffee, dispose of the capsule, and repeat with the second capsule (usually milk). It is slightly more time-consuming and labour-intensive than we’d ideally like but unless you’re making mixed coffees for several people, it’s not exactly a chore.

But capsules are really at the heart of whether or not the Piccolo XS is a good purchase for you. Do you like capsule coffee? In our opinion, the Dolce Gusto capsules produce coffee with a decent crema and aroma, although we found it to be closer in taste to a good filter than a barista brew.

However, if what you go for from the coffee shop is a cappuccino or a caramel macchiato, then this is an inexpensive, effortless way to make them at home. What sets capsule coffee makers apart is the variety of coffee drinks you can buy and the ease of making them.

If you do take the plunge and buy the Piccolo XS, then do consider capsule recycling. You can literally send your used capsules back to Nescafe. Look into it here.

It’s hard to imagine a simpler coffee machine. Or a smaller one. It’s also a piece of equipment that would be more at home in a student flat than in a family house. But The Piccolo XS would be ideal for addicts of Starbucks-style milk-blended beverages who want a quick fix at home.