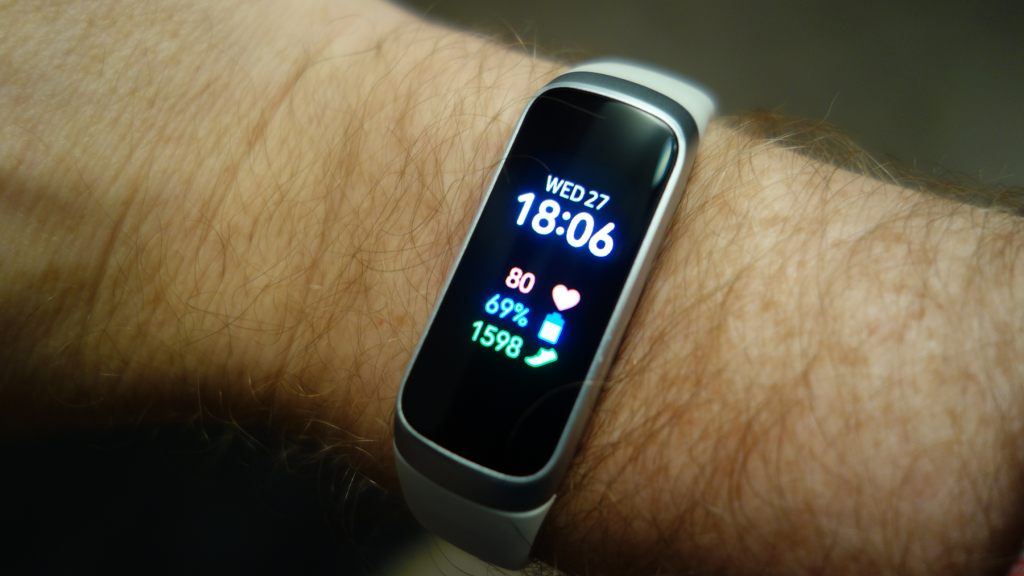 Initial impressions are great, with the handsome form factor and gorgeous display putting up a good front. When you get down to really using the Galaxy Fit, though, its inaccurate heart monitor and lack of GPS tracking take the shine off proceedings. Considering the fact that you can pick up the Galaxy Fit-e for around £50/$50 less and only miss out on wireless charging, the larger colour display, and a few other minor features, or buy the Xiaomi Mi Smart Band 4 or Honor Band 5 for the same discounted price, it’s hard to recommend the expensive Galaxy Fit.

Samsung has released two new fitness trackers, the budget Galaxy Fit-e and the more advanced Galaxy Fit. We look at the latter to see what it has to offer and how it compares to the ever-expanding range of other bands on the market.

You can now buy the Galaxy Fit on the Samsung store for £89/$99.99. It’s also available from a wide choice of retailers, including John Lewis, Amazon and Argos (who kindly provided our review unit).

By contrast, the Galaxy Fit-e costs £35/$38 and can be picked up from all of the same vendors.

Samsung has taken a slimline approach to the Galaxy Fit with a narrow wristband that’s matched by the matt-silver main unit that houses the 0.95in AMOLED touch-sensitive display and sits approximately 18mm high. It’s a lightweight, unobtrusive design that rests comfortably under a shirt cuff or sleeve. 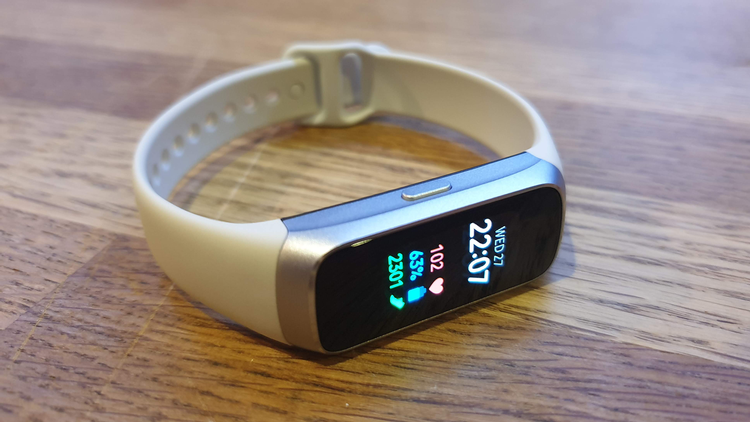 Controls are kept to a minimum, with a solitary small button on the left side of the Galaxy Fit. This acts as an on/off switch, but with the accompanying Samsung Galaxy Wearable app it can also be set to trigger the monitoring of a variety of exercises, including running, walking, cycling, swimming, the use of treadmills and exercise bikes and much more.

This app also allows you to add or remove various widgets on the device, each of which can be accessed by swiping the screen left or right. With a bit of tweaking you can have instant access to your heart rate, steps, a stopwatch or timer, and the newly added music controls, plus several other features. When using these widgets, the power button converts to a back button so you can move through the options easily, with a final click returning you to the home screen.

Turning the Galaxy Fit over reveals the optical heart rate sensor, similar to those used on the Fitbit Inspire HR, Honor Band 5 and Xiaomi Mi Smart Band 4, all of which share a similar design overall. 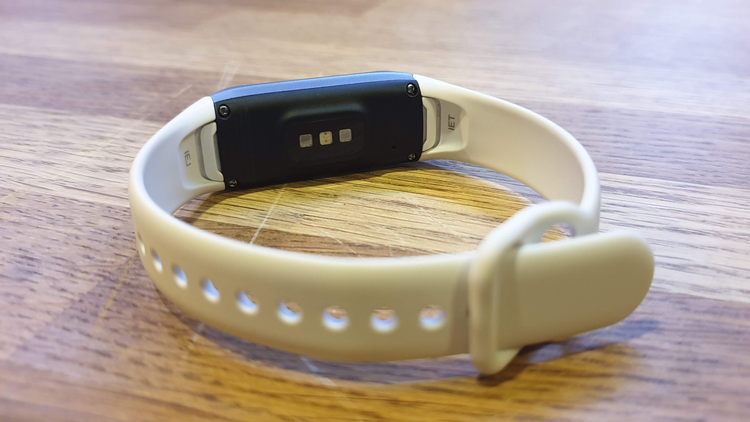 The strap is a bit fiddly at first, as it has a nub on the buckle which you push into the hole to secure the correct length. Then you need to feed the remainder of the strap through the second part of the buckle so that it’s kept out of the way. It’s reminiscent of the strap on the Apple Watch, but the slimmer dimensions of the Galaxy Fit work against it in that it’s harder to get a good grip when trying to take it off. In the end we found pulling the nub out and then gently continuing to move the buckle upwards while pulling on the strap seemed to loosen things without too much fuss.

The casing doesn’t seem like it will survive too much abuse, though, as after only a couple of weeks of wearing the Galaxy Fit – and nothing too adventurous in terms of exercise and adventure – we found several small nicks on the surface of the metal. This is disappointing considering the cost of the device and its intended purpose.

Water proves less of a threat, with the 5ATM rating meaning it can be used for swimming and even showering afterwards.

To keep the slim profile and battery drain at bay Samsung has omitted some key elements from the Galaxy Fit, most notably GPS or even connected GPS which means distance tracking can be affected. This is a questionable decision when you consider that both the aforementioned Xiaomi Mi Smart Band 4 and Fitbit Inspire HR come fitted with GPS.

There’s also no altimeter, so if you’re hoping to gain extra calorie burns from taking the stairs then you’ll have to settle for regular steps instead, and while there is NFC it’s only for charging and not for Samsung or Android Pay.

Samsung includes a simple charging cradle, which does the job wirelessly but would benefit from a heavier base to stop it being turned over by the cord or the device itself.

As this is a fitness tracker rather than a smartwatch, there’s a focus mainly on monitoring activity rather than controlling the functions on your smartphone.

You do get the ability to display any text messages, WhatsApp or Facebook Messenger notifications and reply with pre-set responses, and Samsung recently added basic controls for any music you’re playing on your phone (stop, start, skip backward or forwards). But that’s about the extent of its interactions that are unrelated to health.

The 0.95in AMOLED display is lovely. Colours are bright and rich, with the palette chosen by Samsung being friendlier than some of the bland offerings found on its rivals. The Wearable app gives you the choice of over thirty watch-faces, albeit most of them slight variations on a theme, and the widgets we mentioned earlier can all be added or taken away as you desire. 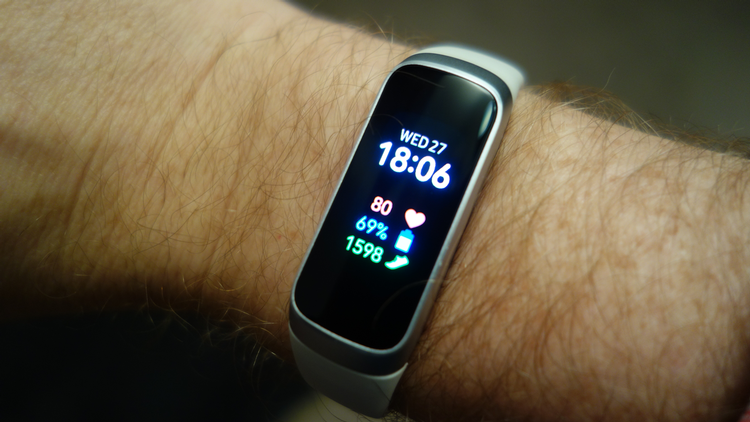 Touch response is good, with most menus requiring a left or right swipe to find them, then either tapping a start button in the case of exercise tracking and measuring your heart rate, or swiping up and down to access deeper information.

The fact that the whole interface wraps around, rather than having hard stops and a beginning and end, means there’s little in the way of redundant swiping. You can get to what you want quickly then get on with your activity.

The Galaxy Fit can automatically sense when you’re active and begin tracking your session, but for the most comprehensive results you’ll want to manually tell it what you’re up to. The workout widget gives you a short cut to the most used types, which include walking, running and cycling, but you can change or add to these via the Manage exercises section on the Wearable app.

In our time with the Galaxy Fit we found its tracking to be reasonably accurate, with distances matching close to our old Fitbit and Apple Watch. Hiking returned roughly the distances we’d expect, albeit without recording the elevation levels. Running was a similar story, maybe with a slight variation that means we’d not trust it to be exact but rather a rough guide.

An important element on any tracker is the heart rate monitor. It’s all well and good going for a gentle jog, but if you’re not getting the old ticker beating a bit faster then there’s little point in the activity.

With this in mind, we’re not exactly impressed with the Galaxy Fit. Yes, it can tell you your heart rate, but looking at it for more than a couple of seconds sees the measurement jumping around by 10-15 beats almost continuously. If we didn’t have other trackers on hand (and wrists) to also keep an eye on our heart we’d be convinced we were having some kind of seizure.

Changing the setting from continual monitoring to once every 10 minutes calms things down somewhat, but it seemed that the Galaxy Fit was often measuring above the rate we’d get from other devices. Again, as a loose guide to your current BPM it’s adequate, but we don’t think it’s accurate enough for a device of this type.

Monitoring our sleep proved more reliable, with the device usually getting things right in this area. It could be fooled by us lying in bed on the weekend and reading our social media feed for half an hour or so, but in the main it seemed to work out when we’d dropped off for the evening.

There are various settings that can affect the battery life of the Galaxy Fit, including having notifications turned on, turning up display brightness, and toggling on constant heart rate monitoring. With all of these engaged we found the device lasted around three and a half days between charges. That’s great for a smartwatch, but distinctly average for a tracker.

Turning off some of the features is obviously likely to prolong the charge, so you can tailor it to suit your particular needs. Either way you’ll need to remove the band for around two hours to get it back up to full power.

As we’ve already explained, the onboard software is simple but quite easy to navigate. You’ll need to use the Samsung Wearable app to set things up properly but doing so gives you plenty more options. 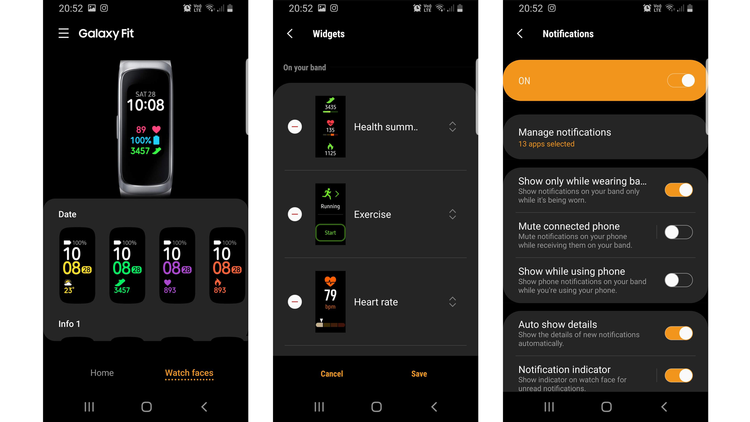 Here you can change the watch-face layout, add or remove widgets, change settings to make the power button automatically trigger certain workouts, and generally customise the behaviour of the device to fit in with your lifestyle. During our time with the Galaxy Fit, a software update added a new music control widget, so it seems that Samsung could well bring new functionality to the tracker even after you’ve bought it.

There’s no doubting that the Galaxy Fit is an attractive device that’s comfortable to wear, with waterproofing, a lovely display and various customisable features.

Erratic heart monitoring and lack of GPS tracking lessen the appeal, though, and it struggles to justify a price tag of around £90/$90 – especially when the Honor Band 5, Xiaomi Mi Smart Band 4 and Samsung’s own Galaxy Fit-e offer many of the same features for a lot less money.