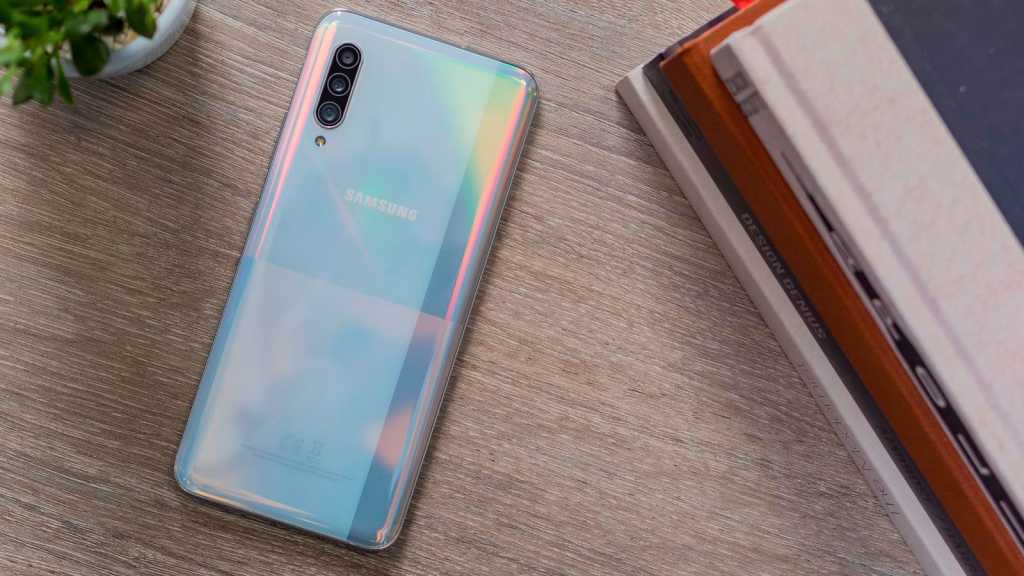 The A90 5G feels like a flagship in most of the ways that matter – slick design, fast specs, and a whopping big display – and the omissions mostly make sense too – wireless charging, waterproofing, and curved edges are the sort of nice-to-haves that most can live without. If your priority is getting a 5G phone and you don’t mind a slightly limited camera, the A90 is a solid and affordable-ish option. But if you can live with 4G for another couple of years, you can find better phones for less from other manufacturers.

It was only in early 2019 that 5G phones began to roll out worldwide, so it’s a little surprising to see that there’s already a push to bring the tech into non-flagship devices. It’s even more surprising that leading the charge is Samsung, which announced the Galaxy A90 5G during September’s IFA event in Berlin.

Now, there’s a big caveat here: the A90 is certainly cheaper than the company’s flagship S10 and Note 10 phones, but budget it is not. In fact, it’s still too expensive for our mid-range phone chart, though it is still (just) the cheapest 5G phone in the UK market at least.

Still, this is one of the first 5G phones marketed as mid-range, and if it offers something close to Samsung’s flagship experience at a more competitive price then that’s no bad thing.

The A90 5G is out now, at an official price of £669. In the UK you can buy the phone SIM-free direct from Samsung, Carphone Warehouse, Argos, John Lewis, or Amazon (where it’s slightly cheaper).

You might prefer to get it on contract on various networks – Vodafone, EE, and O2 have 5G service live now, while Three and Sky Mobile also sell the phone but haven’t switched on their 5G at the time of writing, so you’d only get 4G service at first.

For reference, £669 makes this just about the cheapest 5G phone on the market (check out our pick of the best 5G deals for more options), though the excellent OnePlus 7 Pro 5G and Xiaomi Mi Mix 3 5G are very close, and may well be cheaper from some retailers. Still, this is far cheaper than Samsung’s other 5G phones – the S10, Note 10+, and very very expensive Fold – despite offering quite a few of the same features, which alone is enough to make it one of the best Samsung phones right now.

There’s no word yet on a US release date or price however, though we’d be surprised if it didn’t make its way to one of the carriers eventually. For the moment you can buy the international version SIM-free from Amazon however, starting from $599. 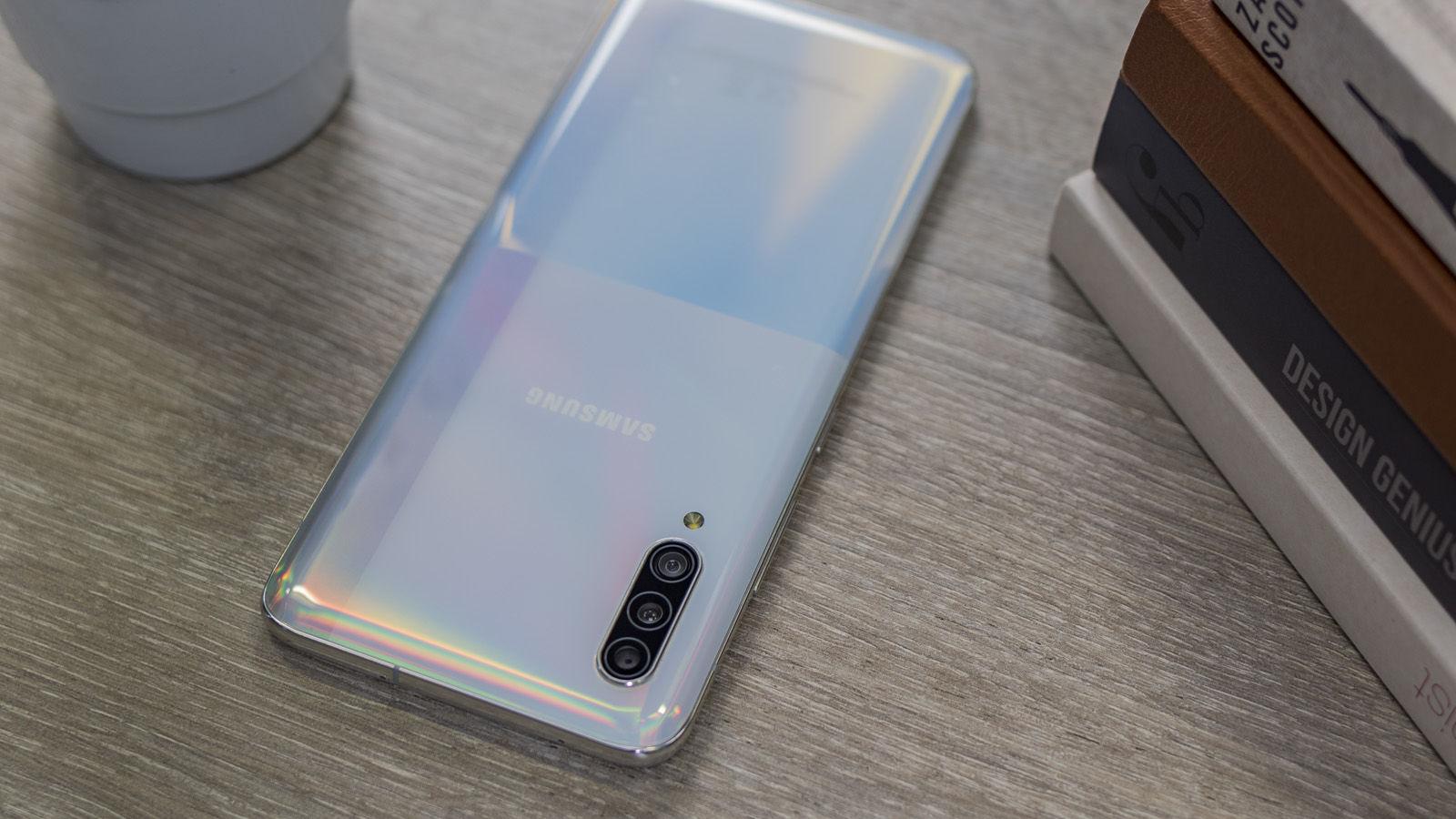 In Hollywood terms, a four-quadrant movie is one that appeals to all of four major market breakdowns: male, female, young, and old. I suspect that isn’t what Samsung had in mind when it designed the Galaxy A90, which is for the best because universal appeal is one thing this phone doesn’t have from a design perspective.

I’ll preface this by saying that I really like how the A90 looks. The four asymmetric segments on the phone’s rear each catch and reflect the light in subtly different tones, whether you opt for the black or (superior) white model. It’s striking, eye-catching, and a more daring design than any of Samsung’s recent handsets – the famous foldy one excepted.

That said, almost everyone else I’ve shown the phone to has disagreed, so the design is clearly at least a bit divisive, rather than a people-pleaser. 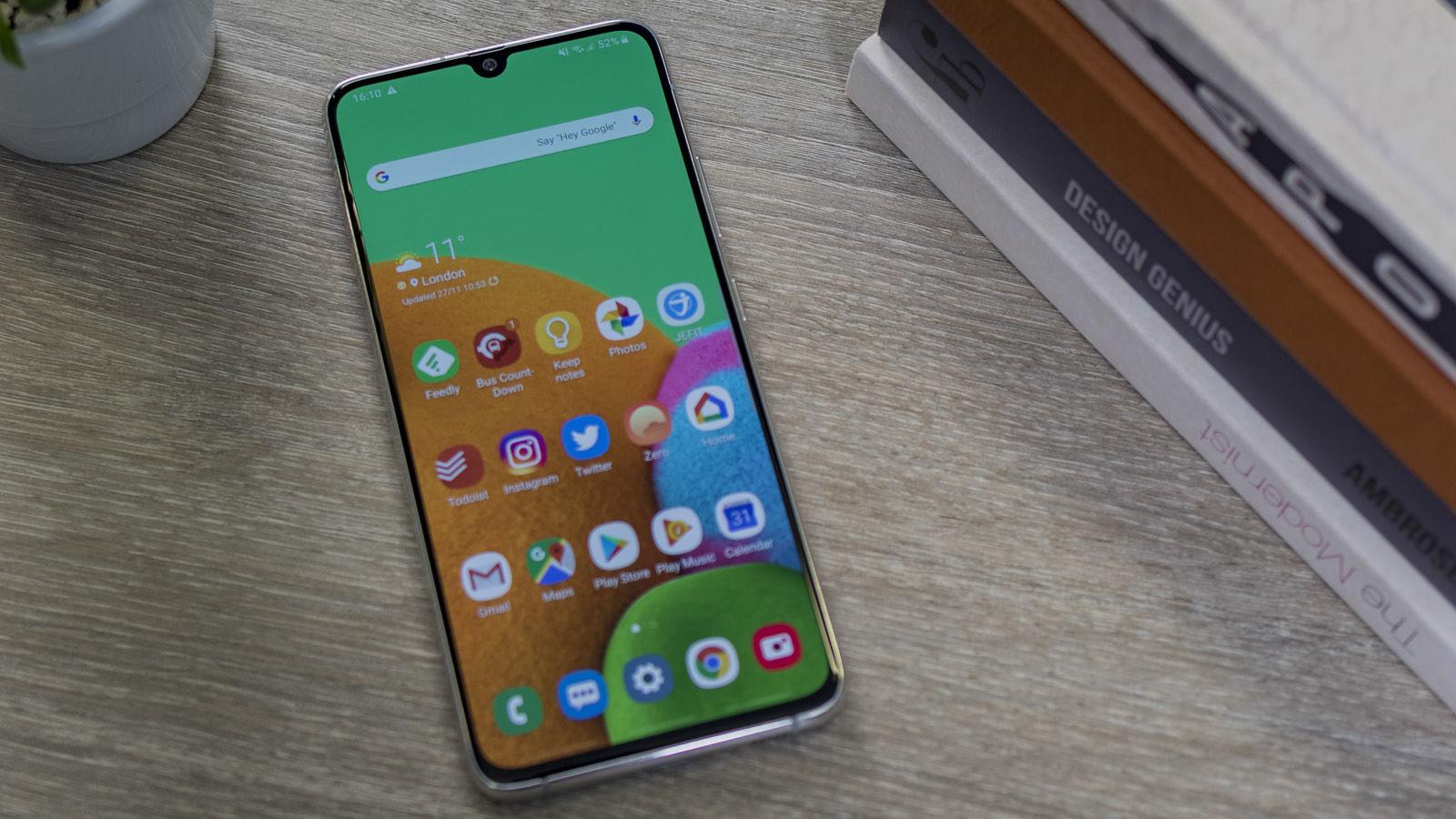 At least the front of the phone is more straight-forward. The almost full-screen display is a whopping 6.7in (we’re still waiting for the first 5G phone that isn’t bloody enormous), and the 20:9 Super AMOLED panel is only interrupted by a petite teardrop notch in the centre.

That display is fantastic too, as you’d expect from a Samsung phone, with black blacks and vivid, eye-catching colours. It’s only 1080p, and there’s no ultra-fast 90Hz refresh rate (though no Samsung phone has that yet), but neither is essential and neither will be a priority for most people.

There’s slight bezelling on all sides though, which combined with the large panel makes this phone feel pretty giant, and is one of the few design sacrifices for the price – you’ll have to give up on the curved display tech that now dominates Samsung’s high-end devices.

Elsewhere, the design is fairly straightforward. USB-C for charging, but – tragically – no headphone jack. A volume rocker sits alongside the power button, which unfortunately does double as a Bixby button too – Samsung hasn’t given up on its beleaguered voice assistant yet.

All in all, it’s a phone that looks and feels an awful lot like a flagship, so long as you can live without the curved edges or 4K display. The four-panel rear clearly has a touch of Marmite to it (you either love it or you hate it), but it’s certainly not dull or safe, and that’s always worth celebrating. 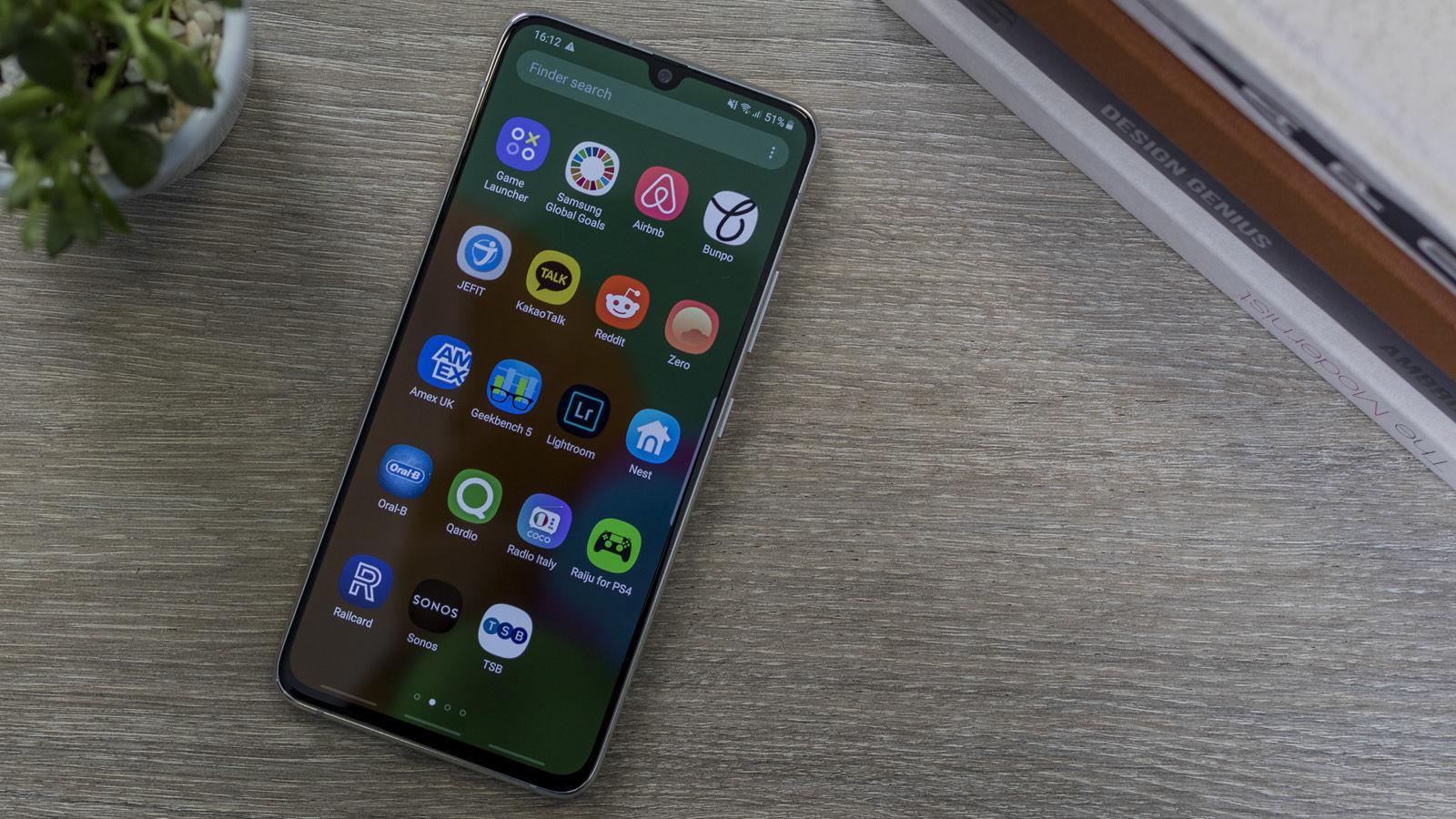 Specs and features: Functionally a flagship

Once you get inside the phone, it’s a similar story – Samsung hasn’t skimped on specs to keep costs down.

At the heart is the Qualcomm Snapdragon 855 processor, which is still one of the fastest on the market. It’s backed up by 6GB of RAM – some way short of the 12GB that the flagships top out at, but honestly more than enough for any normal use case, even with intensive multi-tasking.

Storage is 128GB, with no option for more, but there’s a MicroSD slot that’ll let you expand it with up to 512GB extra if you so desire.

Take a look at our benchmark results and you’ll see that the result is a phone that compares very comfortably to its 5G rivals, matching or even bettering its pricier Samsung siblings across our range of processing and graphics tests.

Battery life is just as competitive, with a 4,500mAh cell that has comfortably delivered two days of use during my testing. 25W fast charging topped it up by 53% in 30 minutes from empty – very respectable – though understandably wireless charging has been omitted.

The other big corner cut is water and dust resistance, with no IP rating on the A90 at all. That doesn’t mean it won’t survive a spill, but means Samsung hasn’t paid for the independent certification, so I probably wouldn’t risk taking it into the shower.

There’s no similar shortfall in connectivity though. Bluetooth 5.0 and NFC, along with the usual GPS and Wi-Fi stuff. There’s also support for DeX, which will let you connect your phone to a monitor to use it as a desktop replacement – though the dock is sold separately. 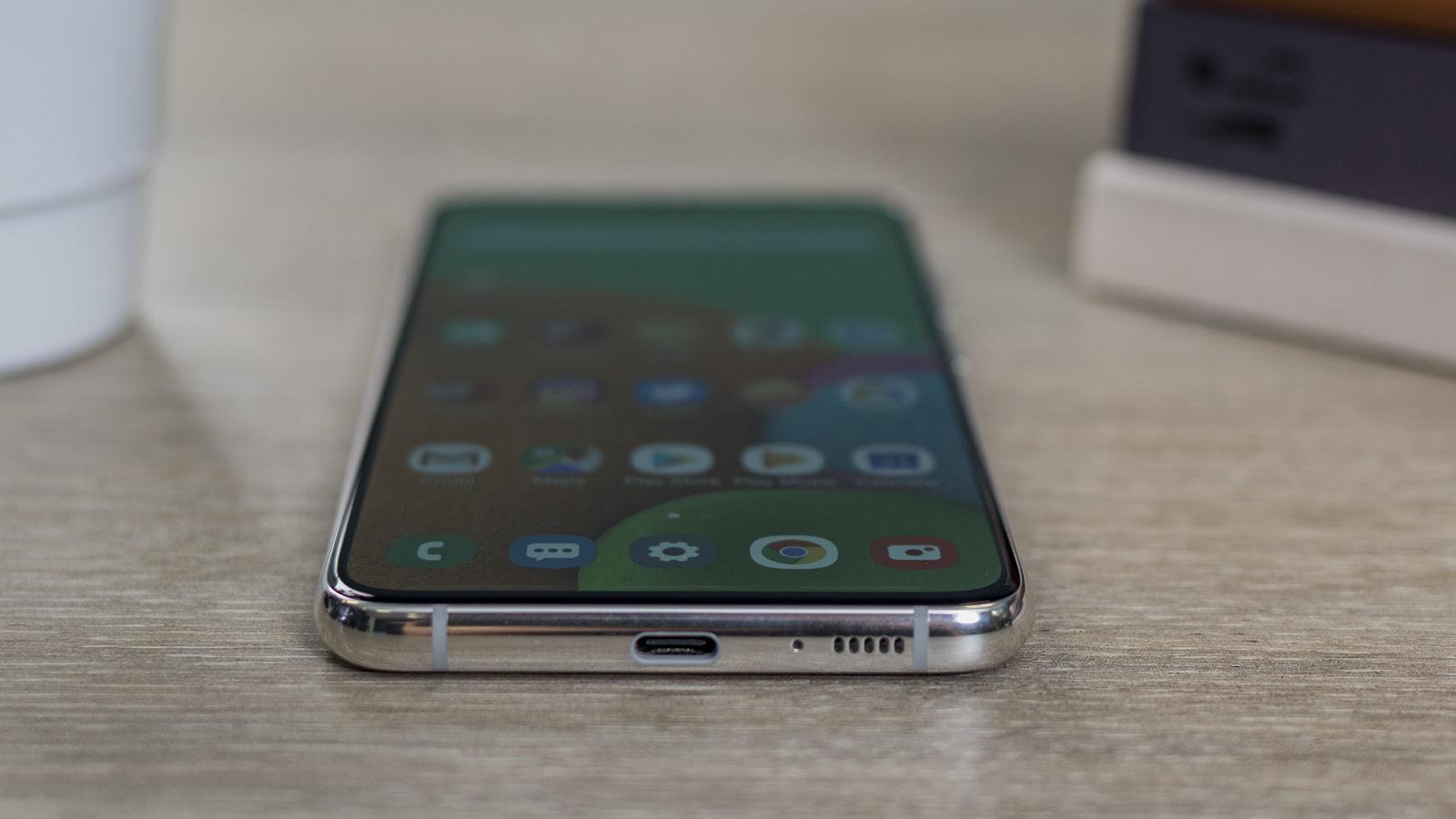 Then there’s the 5G of course. Our review handset was provided by Vodafone, so I’ve been testing the phone on their 5G network in London. I’ve also used EE’s network in past reviews, and right now both are in a similar place: 5G connections are incredibly fast, but coverage is so spotty that you’ll rarely get to take advantage of it, at least for now.

Still, generally speaking you don’t have to pay extra for a 5G contract (beyond the slightly inflated hardware prices), and you still have 4G support the rest of the time, so there’s no real downside to getting a 5G phone, and it does futureproof you. Just don’t expect it to be a game-changer unless you’re lucky enough to work or live right in one of the few 5G hotspots (for reference, even our office right between King’s Cross and Euston stations in London is not so lucky).

Biometrics include face unlock, though since it’s only driven by a single selfie lens it won’t be the most secure around, and I found it struggled with odd angles or difficult lighting. There’s an under-display fingerprint reader too, but it’s optical rather than the superior ultrasonic tech in the Samsung flagships. I found it functional but sluggish, but that’s typical for under-display sensors right now. 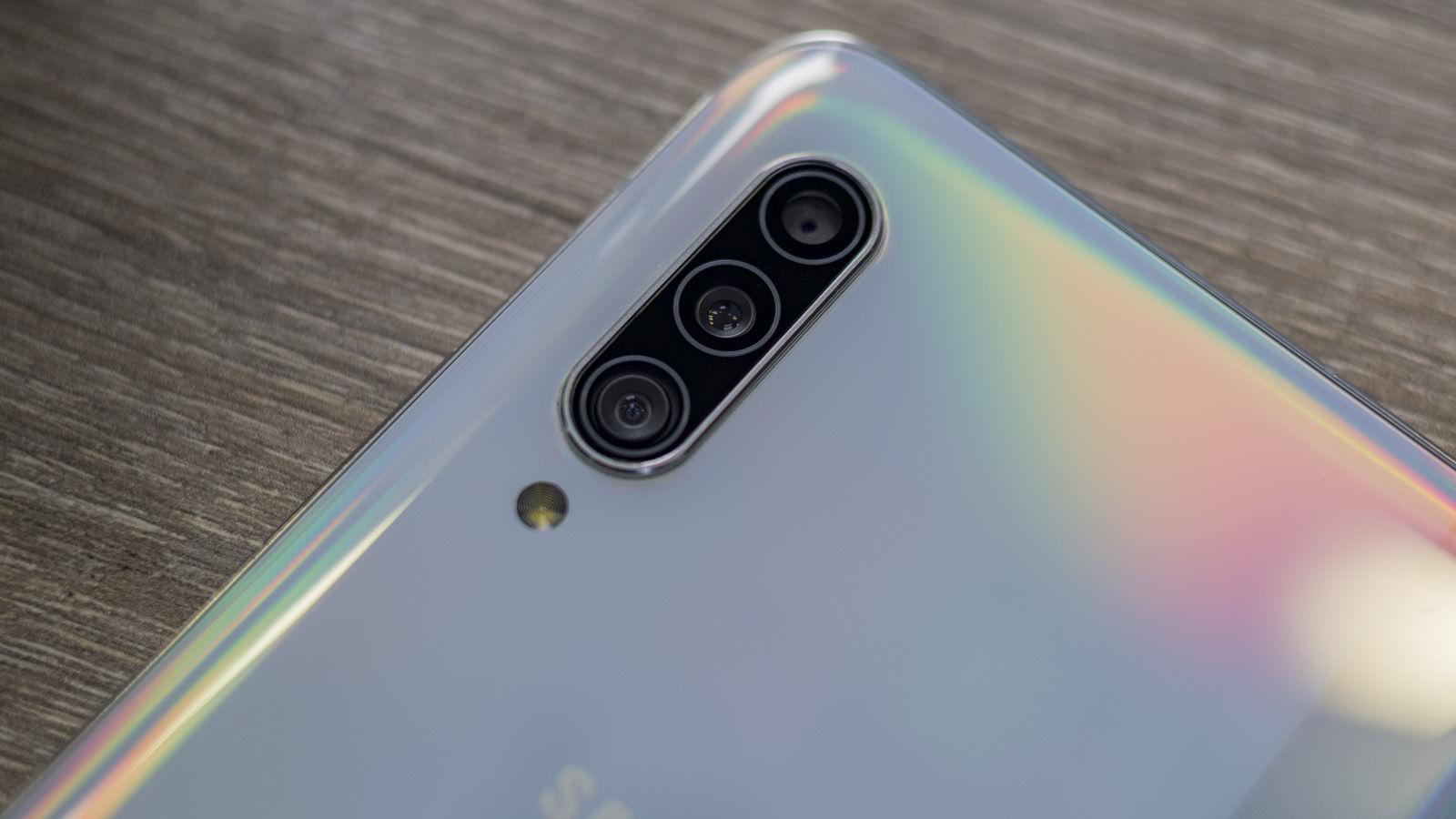 Speaking of that selfie camera, it’s a 32Mp, f/2.0 lens. It takes solid shots, with video in 1080@30, but there is one cheeky cheat: it offers you the option of wide-angle or regular selfies, but since there’s only one lens all it’s actually doing is cropping in on the default shot. This isn’t the first phone to do it, and it won’t be the last, but it’s still worth highlighting that this is not the same as the dedicated wide-angle selfie lenses on some handsets.

Taken as a whole, the camera is fine, but it’s clear that this more than anything is where Samsung has decided to compromise to hit a lower price point. 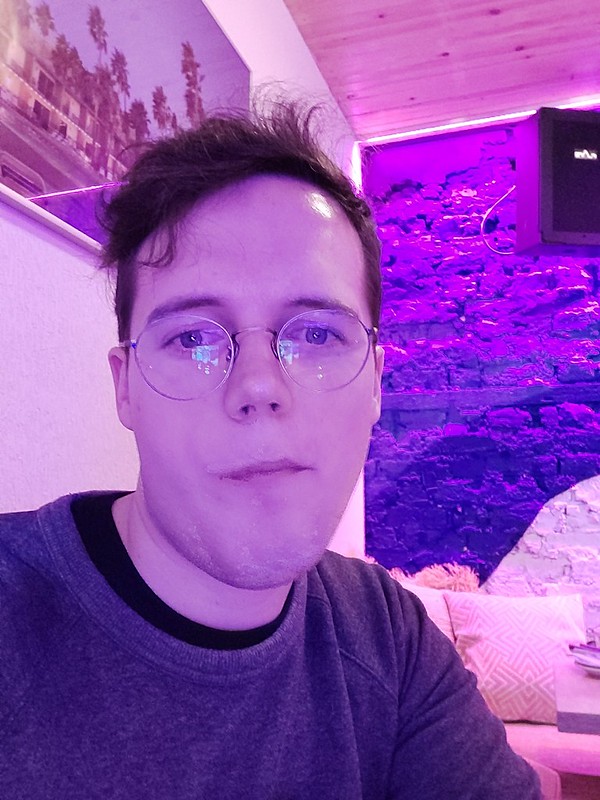 In good light, the phone delivers crisp, detailed shots that deliver pleasingly true-to-life colours at the sacrifice of some dynamic range. It’s certainly not the best camera out there, and occasionally shots came through a little flat, but it holds its own, helped by the inclusion of a wealth of additional modes and controls like adjustable depth-of-field or 960fps slow-mo video.

Things get shaky in low light however. There’s a night mode that does a good job of capturing colours while introducing a fair amount of noise, but the regular camera mode produces absolutely awful shots in even slightly dim lighting, with noise, artifacts, and dreadful colour reproduction.

This is far from the only phone camera to struggle in bad lighting, but at £669 it’s probably fair to expect a little more from the A90 – especially when Samsung’s flagships are still among the best for photography, and the triple camera array here could easily mislead buyers into thinking the A90 can keep up.

Throw in the fact that video caps out at 2160@30 (though does do 1080@60) and the lack of any zoom lens and the result is a camera that is really under-performing for the price, which will limit appeal for the Instagram-obsessed. 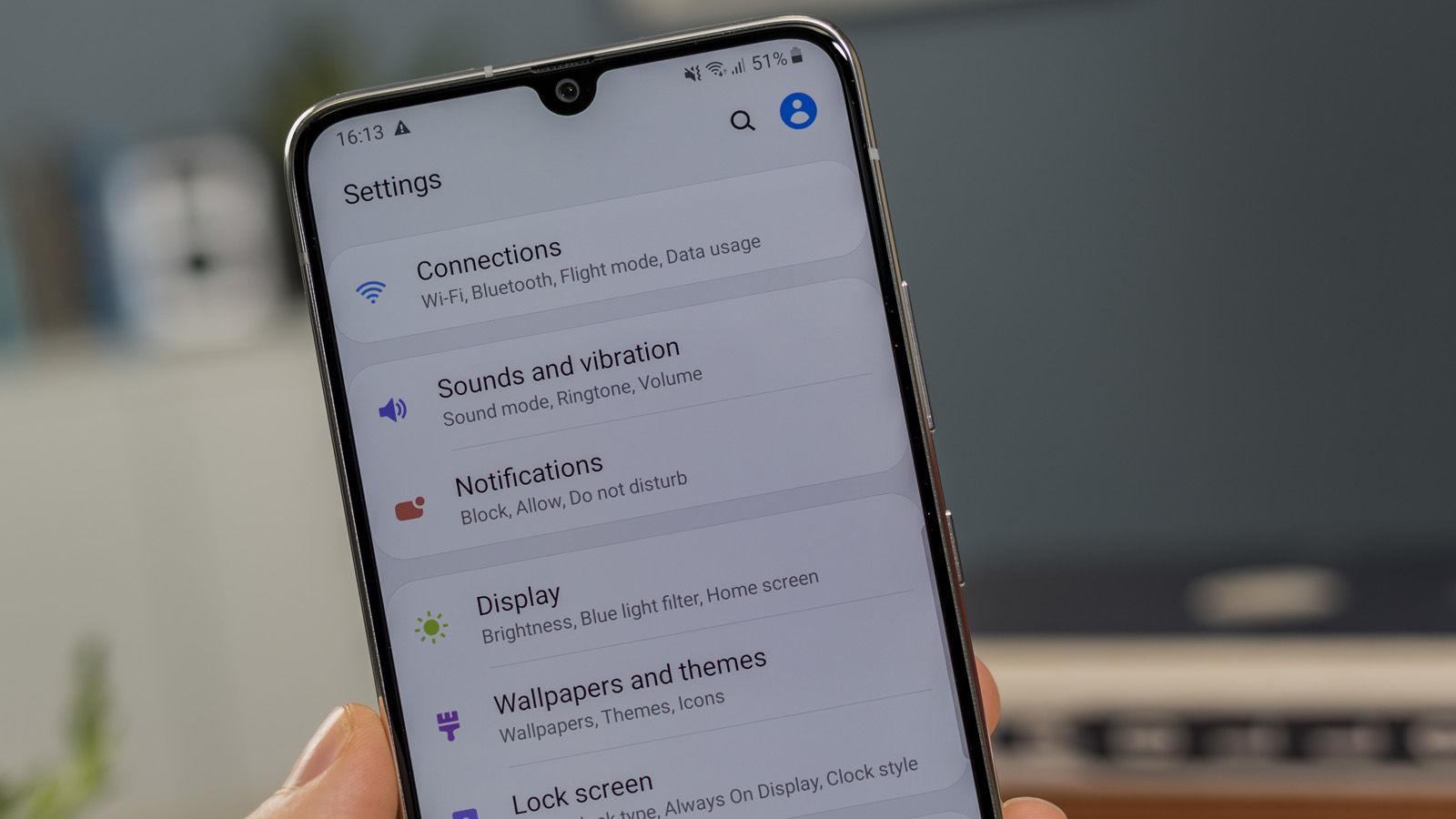 Finally, software. Like other recent phones from the Korean giant this runs its One UI Android overlay, sitting on top of Android 9. If you haven’t used it before One UI is a big step up from Samsung’s previous Android skin, though I’d argue it’s still one of the more intrusive out there, with a full suite of Samsung apps pre-installed and an interface that’s quite far from the stock Android experience.

That’s not necessarily a bad thing of course – many will be fans of the iOS-style home screen options or the Samsung-specific gesture controls (though surely few will enjoy the Bixby presence) but anyone used to a Pixel or OnePlus might find it stifling, and Samsung remains one of the slower manufacturers to issue security and software updates.

The A90 5G feels like a flagship in most of the ways that matter – slick design, fast specs, and a whopping big display – and the omissions mostly make sense too – wireless charging, waterproofing, and curved edges are the sort of nice-to-haves that most can live without.

The only major letdown is the camera, which is less versatile than it may at first seem, and particularly struggles in even moderately challenging lighting conditions. It’s fine in good light, and has a few extra modes like super slow-mo, but this is nowhere near a flagship camera, and can’t even match many other cheaper phones from rival companies.