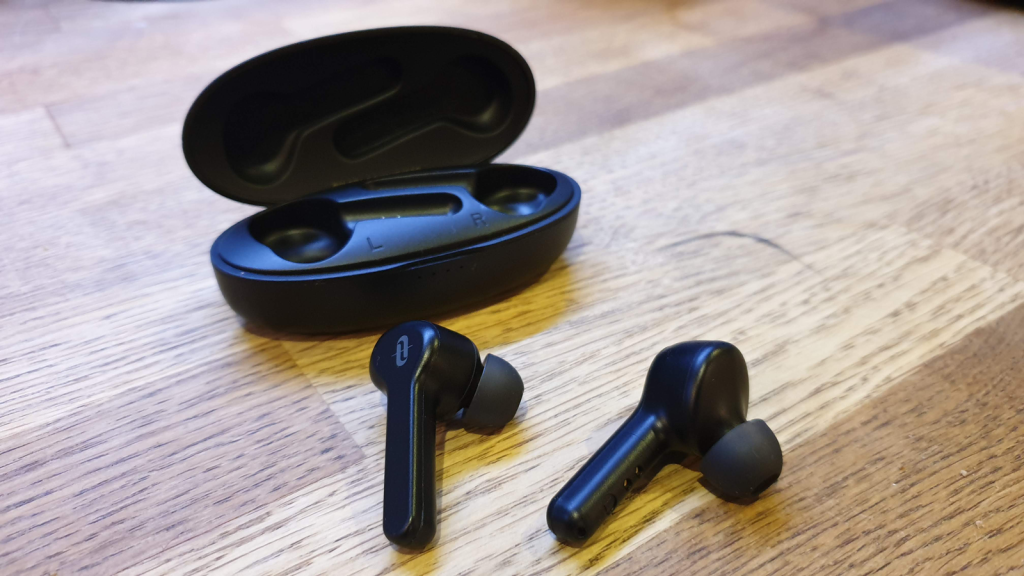 TaoTronics has put together an impressive package with the Soundliberty 53 earbuds. The audio performance is strong across a wide range of music styles, video syncing is accurate, waterproofing is better than many of its rivals, as is battery life. The only spoiler is the touch-sensitive controls, which can be erratic at times. Stroking rather than tapping helped, so if you adopt that technique then these earbuds could be an excellent buy.

The SoundLiberty 53 wireless earbuds follow the Apple AirPods and Huawei FreeBuds 3 school of design but at around 25 percent of the cost. We see which corners have been cut to achieve this, and whether those should concern you or not.

Check out the best budget wireless earbuds to see what else is out there.

Where the Apple AirPods and those they inspire have gone for circular stems and slim, outer-ear buds, TaoTronic has a slightly different take on things. The buds themselves are in-ear and attach to a thicker speaker chamber that’s more common with this type of design.

The clever part is that the outer edges are flat rather than curved, so the earpiece doesn’t seem bulky when worn and the stems looks subtle and modern. A black livery also helps to differentiate them from those that follow the way of the fruit in terms of colour schemes. 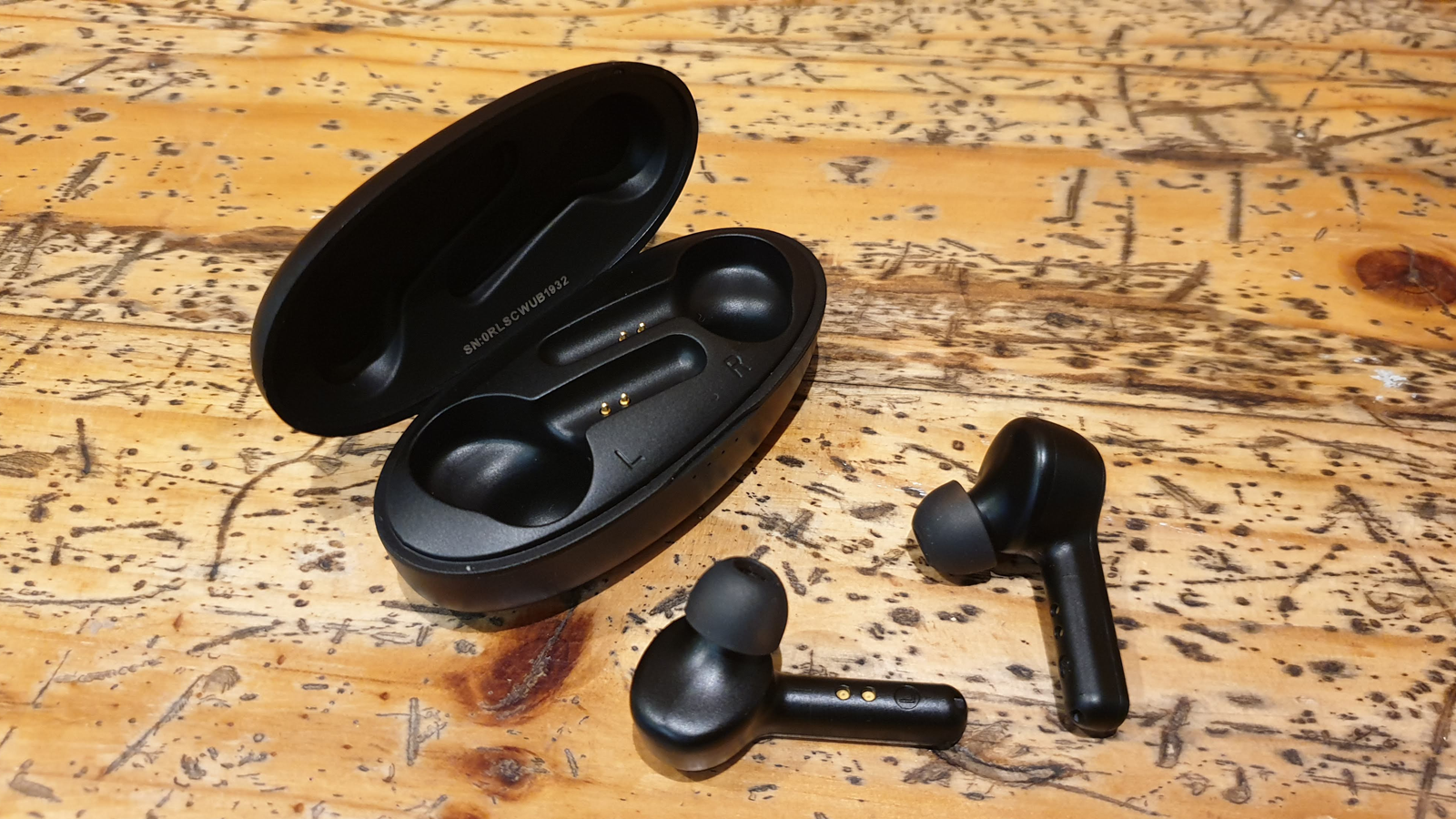 As you’d expect with true wireless earbuds, the carrying case also doubles as a charger. It’s a decent enough plastic box, although the slightly flappy hinge does remind you that these are not the most expensive of items. There’s also a micro-USB charging port, which seems somewhat dated in these days of USB-C.

The buds themselves have more allure, with the matt plastic construction feeling premium and durable. They both fit snuggly in the ear, with a slight twisting motion securing them for the most-part. TaoTronics also includes three sizes of cover in the box so you can tailor them to your own ear shape.

The smooth upper-areas of the buds contain touch-sensitive controls that can be used to start or stop playback, skip tracks, answer the phone, adjust volume or trigger your device’s virtual assistant. These are accompanied by small LED status lights and dual microphones for talking on the phone or quizzing Siri, Alexa, Bixby or Google. 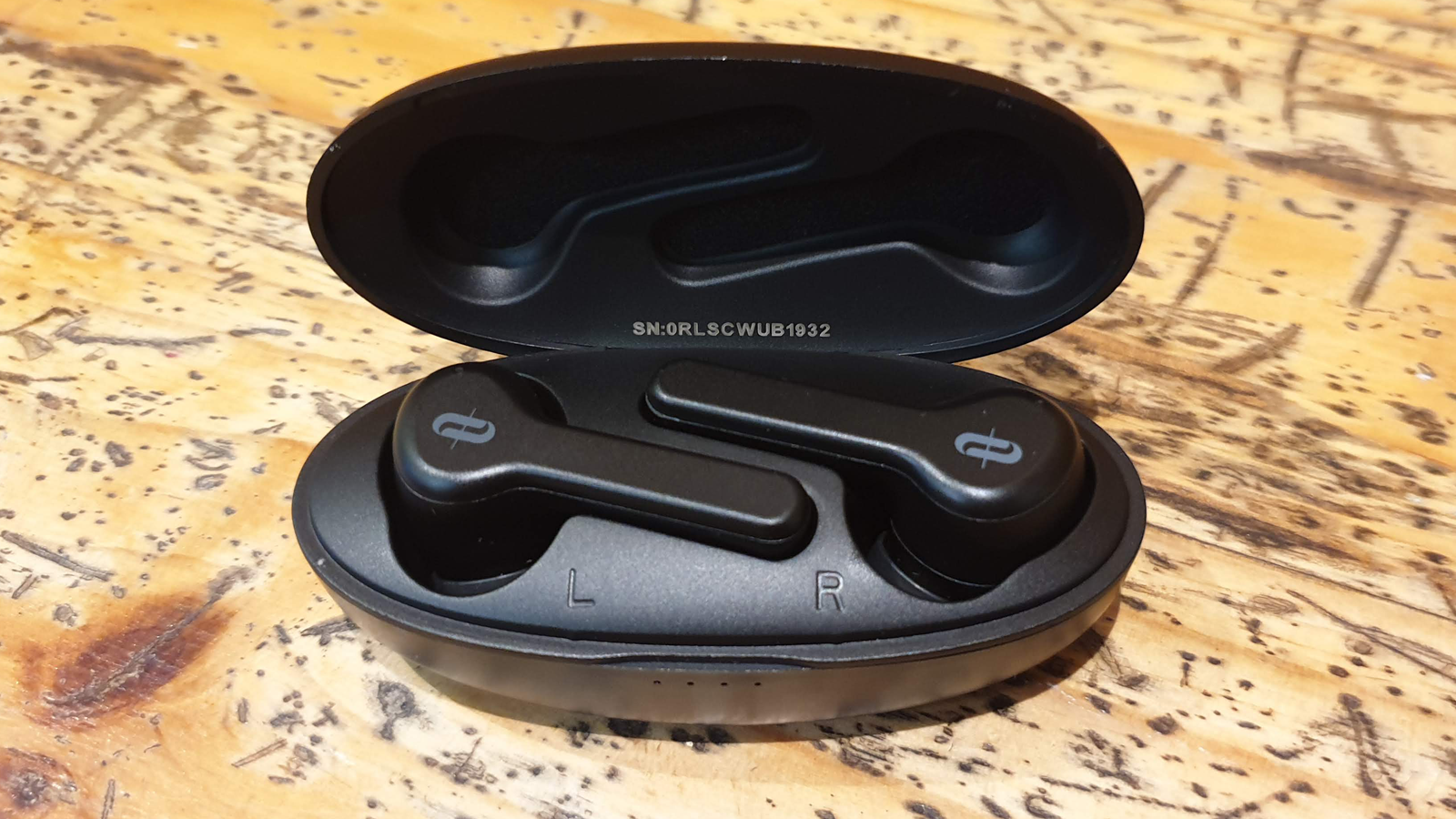 A waterproof rating of IPX7 is impressive at this price point, meaning that the Soundliberty 53 should be able to survive being dropped in water and certainly deal with any sweating at the gym.

Bluetooth 5.0 is also welcome, as it brings longer distances over which you can walk away from your device without losing a connection. We were happy to find that while wandering around the kitchen cooking dinner, we never had the signal drop from our audiobook, even when we ventured into the next room to grab something.

Listening to music, podcasts and audiobooks on the Soundliberty 53 is an enjoyable experience. The soundscape is broad, encompassing a wide range of frequencies that all find their pocket.

Overall the mix is well balanced, suffering only from the normal problem that plagues small, lightweight speakers in that the bass lacks any real punch or depth. That’s not down to the Soundliberty 53 as such, as physics play their part in this area.

Spoken word content is rich and full, while video syncing to content on Netflix, Amazon Prime Video, YouTube or other providers shows that the earbuds have no problem staying in time with what’s happening on-screen.

Call quality is equally good, with those on the receiving end reporting our voice sounding clear and discernible even when out and about.

If there is a disappointment with the Soundliberty 53 it’s the flaky controls. The touch-sensitive area generally responds well to the double-tap that starts or stops playback of tracks, but we did find trying to access the other features was very hit and miss.

Tap once on the left bud to lower the volume and it can work fine. Do it again and nothing happens. It’s the same with triple-taps to skip tracks, there’s just a worry that the command won’t register or something else will trigger. We found ourselves accidentally dialling phone numbers when we were trying to move between songs, which the manual doesn’t even list as a feature!

Sticking to the simple options worked about 70% of the time, so if that’s all you want then these will, mostly, get the job done. After a while we did find that brushing a finger down the surface was more reliable than tapping, so maybe adopting that approach would prove more successful for any potential buyers.

Battery life is slightly above average for budget earbuds, with our units lasting for around four and half hours per charge, usually running at around 60-70% volume. A full recharge takes around two hours and the charging case holds enough juice to repeat this process a further four or five times.

There’s plenty to like about the Soundliberty 53. Sound quality is very good, the aesthetics or better than the Apple AirPods, calls are clear, waterproofing is impressive at this price and the battery life is above average too.

The only real struggle we had was with the erratic touch controls that just proved unreliable enough to become annoying at times. It could be that our review samples were slightly faulty, and if that’s the case then a fully functional pair of these earphones would be an absolute steal at around £40/$40.