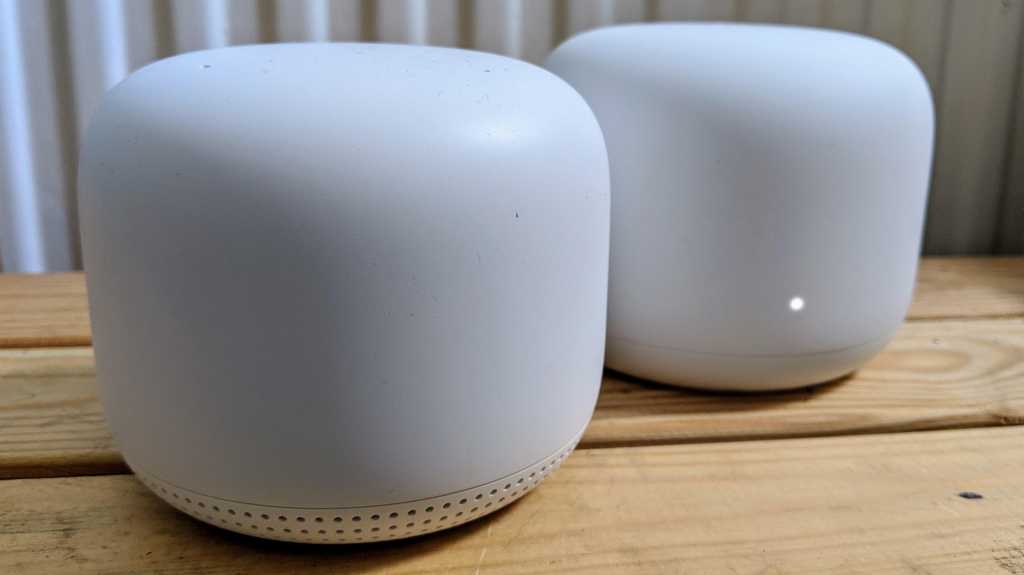 Google Nest Wifi is attractive, easy to set up and offers some handy features – including the fact that the access point is also a smart speaker. That helps justify the price, but Wi-Fi 6 is missing and the speeds aren’t anything to get overly excited about. This won’t matter for most homes, though.

It may have been overshadowed by the Pixel 4 and Nest Mini, but Google has also launched a new mesh Wi-Fi system. These unassuming white domes aim to provide a strong and reliable internet connection around your home in a hassle-free way. And that’s pretty much what we’ve found in our full review.

For those that don’t know, this isn’t just a replacement for your existing broadband router (in fact, you’ll need to keep that). It’s an extension to give wider coverage by connecting multiple points together.

It’s a scalable system so you can add more devices in if you have a particularly large home or office.

What you really want is the router and point bundle to make the most out of it, which is £239/$269. You can also buy the router separately for £149/$169. The point will only work if you have the router or the older Google Wifi system.

We’re reviewing the full kit as its supposed to be used. You can buy extra points in case you have a very large space to cover. Google is also offering a kit with two points and a router in the US for $349.

The Nest Wifi can be thought of a Google Wifi 2 (or 2nd-gen) since Google owns the Nest brand now and is using it for various smart home products.

Looks wise, the system is quite similar but the devices have been given a more pebble-like rounded design compared to the flat topped cylinder or the original. Oddly they only come in Snow white colour in the UK, while US buyers can choose Mist (a pale blue or Sand (a pale peach) colours for the point.

Regardless, the white models still look really nice and have a nice matte finish which feels nice to the touch. It’s also nice to see that the external enclosure is made from 45% post-consumer recycled plastic (or 40% for the point).

While the router is extremely simple with a single LED indicator (it’s likely to be tucked away out of sight), the point has a little more going on. It has four holes on top where microphones sit, a privacy switch at the back and ring light around the base. It also has capacitive touch controls on top.

We’ll explain why in the next section.

Setting up the Nest Wifi system is incredibly easy via the Google Home app, which you might already have if you’ve got some existing smart home devices. The app guides you through the process, which isn’t much more than plugging the power in and connecting the router to your existing router.

Once you’ve chosen a name and password for the network, you’re away and can simply connect to the mesh whenever it’s in range instead of your normal Wi-Fi.

Google has even made it backwards compatible with the older Google Wifi system which is great news for anyone who has it, but wants to add the Nest Wifi point for example.

It’s very easy to do things like create a guest network, pause the Wi-Fi (via the Google Assistant too) and set schedules. Other features include setting priority devices (perhaps consoles and 4K streamers) and safe search.

With the guest network, you can even get a QR code on the Nest Hub or Nest Hub Max to make it easier for people to connect.

The router does a pretty basic and boring job, but it’s partner in crime is not just a Wi-Fi access point. It’s also a smart speaker very similar to the Google Home or Nest Mini. It’s similar to the Netgear Orbi Voice so can be used to play music, control other smart home devices or simply set a timer.

This makes so much sense and gives another dimension of functionality, so you’ll be glad of it in the kitchen, or a bedroom for example.

You will, in theory (depending on your phone/laptop etc), get faster speeds from the router then and neither has Wi-Fi 6 (aka 11.ax) which is the latest standard – they are Wi-Fi (or 11ac). While that’s a little bit ahead of its time for now, it would make sense if the new kit was future-proofed so it can make a difference in time.

This would have put the cost up, mind, so there are pros and cons but the point is no faster than the original Google Wifi.

A couple of other downsides include the lack of ports on both the router and the point. The point doesn’t even have a single Ethernet port and the router only has a single one after you’ve plugged in into your normal router.

In terms of performance, Google says you can have up to 200 devices connected (that’s 100 per router or point). We don’t have that many to test this claim out and it’s unlikely you do either, but we’ve not had any issues in a house full of tech.

Speed-wise, the Nest Wifi is decent, although it’s not breaking any new ground. We saw speeds of over 450Mbps occasionally but speeds of 250-300Mbps are more common.

We tested with a Pixel 3 in four different places around a typical three-bed semi-detached starting off right next to the router, placed by the front door. Then moved 5m away with a wall in the way, then upstairs in a bedroom at the back and finally out in the garden.

You can see the speeds we got with just the router and then (for the latter three tests) with the point placed at the opposite corner of the house, still on the ground floor – roughly the location of the 5m test.

As you can see, the point improved the performance of those locations. It also meant we could go further down the garden without losing a connection.

Whether you need Nest Wifi depends on various factors, such as the size of your house and what sort of features you want from a mesh network. Those with Google Wifi needn’t upgrade but can add in the new point thanks to backwards compatibility.

We certainly find Google’s second-generation of mesh systems one of the best looking and most user friendly on the market with smooth set up and really easy to use features such as a guest network and schedules.

You can also prioritise certain devices and even pause the connection by asking the Google Assistant with your voice.

If you struggle with Wi-Fi signal from your regular router then this will almost certainly help. Speed-wise though – if you’re bothered – it’s nothing special and is missing Wi-Fi 6 for future-proofing. For most homes, this won’t really matter though, with the other elements being more of a factor.