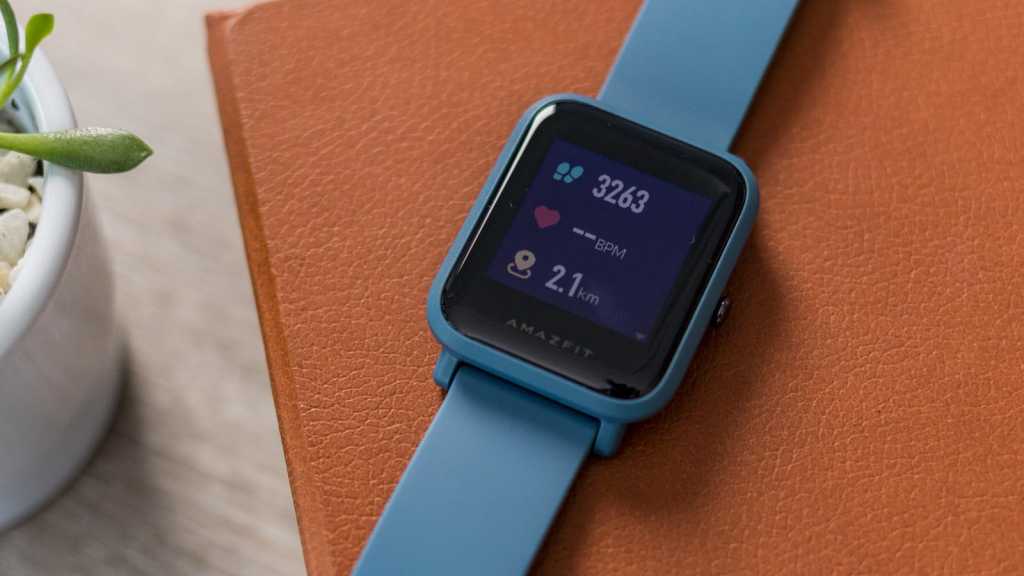 For the price, the Amazfit Bip Lite offers a long battery life and covers the core functionality expected of a basic fitness tracker. However, some of the key features like heart-rate tracking aren’t all that reliable.

Amazit is a wearables specialist from Huami – one of the upcoming Chinese brands aiming to take on the biggest names in the fitness tracking world. This brand is particularly good at building impressive longevity into its products; something that a lot of the bigger rivals fail to deliver on.

The Bip Lite is no exception. Claiming an impressive 45-day battery life – this compact budget fitness tracker is the follow-up to the Amazfit Bip – and has nearly all the same specs – save for integrated GPS tracking and weaker water resistance. But what’s it like in practice? We’ve spent some time testing it to give you an informed opinion.

Considering other wearables in the same vein at the Bip Lite? Take a look at our list of the best fitness trackers for 2019.

Some Huami products aren’t always available in the UK or US out the gate but this isn’t a worry with the Bip Lite. You can pick it up on Amazon for £51.00 in the UK, whilst our US readers can buy it for $64.99 from Walmart. You can also check out online retailers such as GearBest, which can offer discounts on the Bip Lite but a warning that these products are Chinese imports. 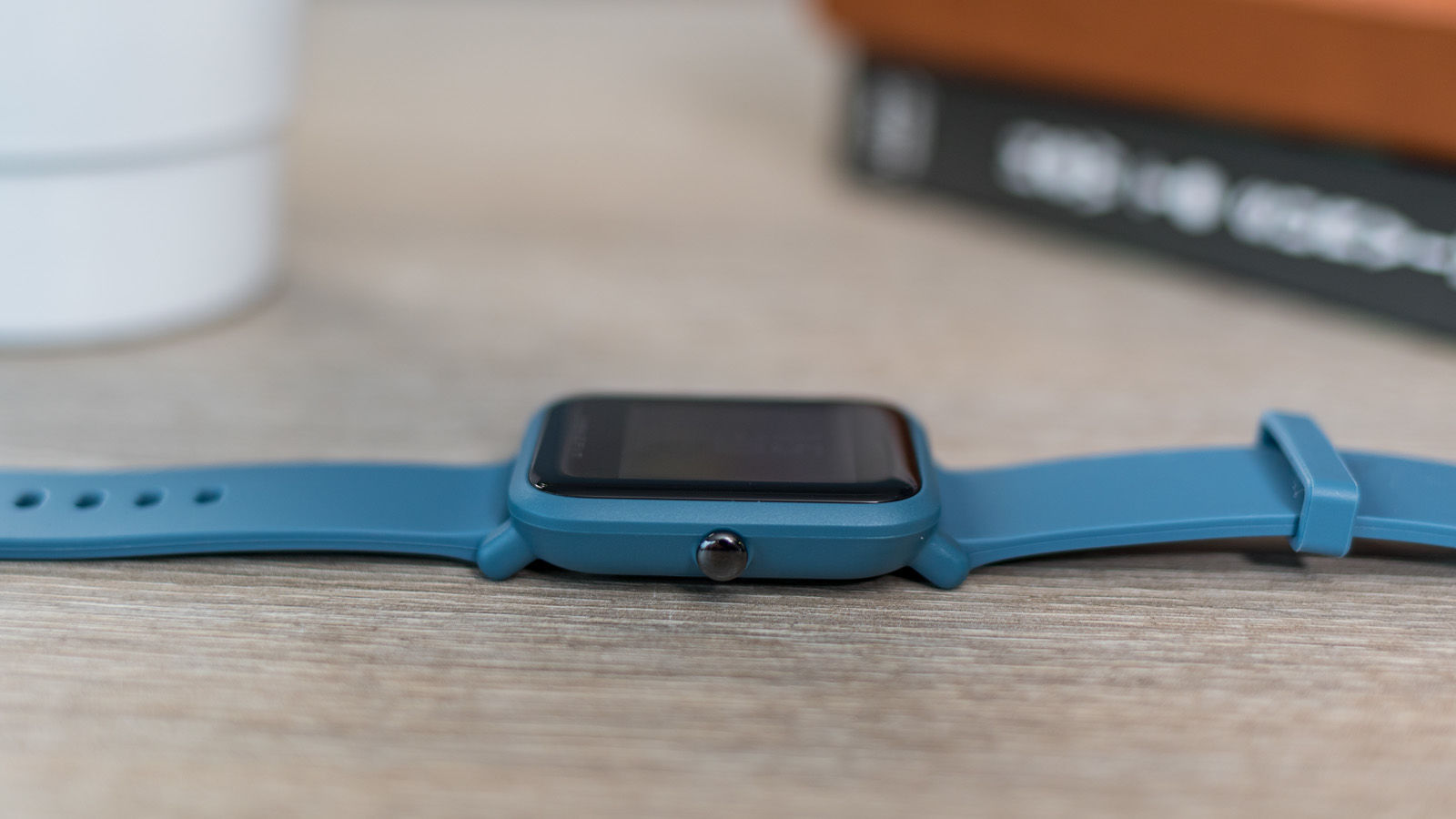 The Bip Lite has a silicone strap, along with a 1.28-inch rectangular Gorilla Glass display. This combination gives the watch quite a sporty look, which makes sense as the Bip Lite has limited functionality beyond fitness tracking. It could be vaguely compared to the shape of the Apple Watch but the finish isn’t nearly as high quality; which is to be expected considering the price of this tracker.

You can choose between three strap colours which vary depending on your region. Black, pink and blue – which we tested. The watch weighs 31 grams, making it a light and unobtrusive wearable – I honestly forgot that I was wearing it sometimes. It’s comfortable and easy to put on, and isn’t too bulky around your wrist either. 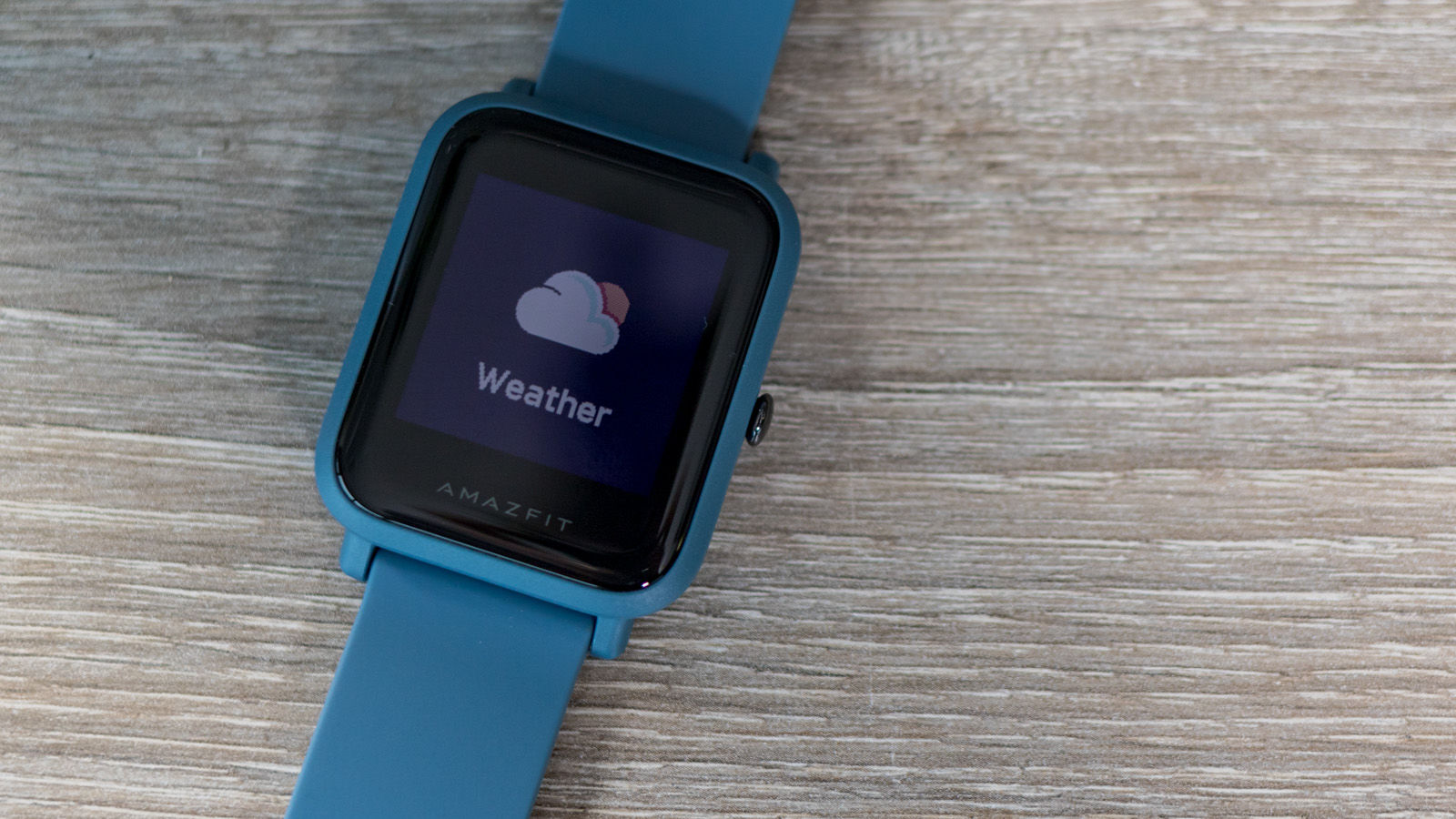 The display itself is quite basic, designed to be easy-to-read and navigate. It isn’t the most aesthetically-pleasing but it gets the job done and is easy to look at mid-workout, should the need arise.

This fitness tracker is also water-resistant up to 30 metres and we found this to work well. You can wear it while you’re swimming (providing you’re not going scuba-diving), however, it can’t actually track swimming as a specific activity, only your heart rate during the exercise.

One of the biggest selling points of the Bip Light is the monster battery life, thanks to its 200mAh lithium-polymer cell. Amazfit claims 45 days on a single charge. In our testing – using several exercise modes – it lasted just over a month before it needed charging.

Other rivals last up to a week at most before they need charging, so this is a refreshing change and means that you can use the Bip Lite as a daily accessory without having to worry about it running out of charge. When we did eventually charge it, it only took a few hours to reach 100% again. 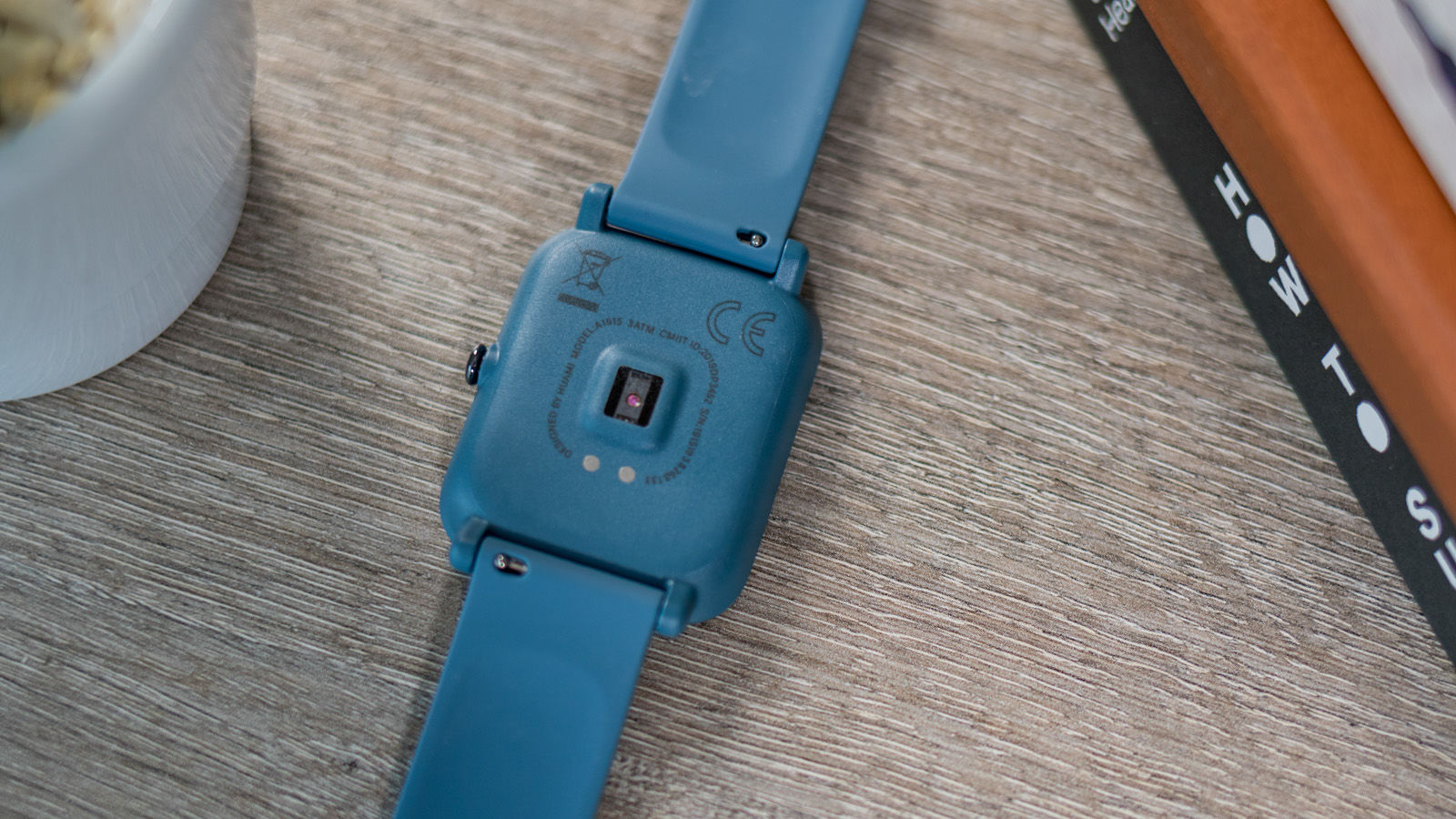 The Bip Light has four different modes that it can track: outdoor running, treadmill, walking and outdoor cycling. To quickly turn on the activity monitoring, you can press the button on the side to start, and confirm your choice on the screen of the watch. The Bip Lite then displays the timings of your activity, the steps you’ve taken, the distance travelled and your current heart-rate.

You can pause the exercise at any time should you stop for any reason and then view your activity on the Amazfit app – one of the companion apps to Amazfit wearables – more on this later.

This tracker doesn’t come with built-in GPS – though you can still track your route when exercising, providing you have a smartphone with you, paired via Bluetooth. If you do want a tracker with GPS and enjoy everything else about this wearable, then it’s worth looking at the standard Amazfit Bip. 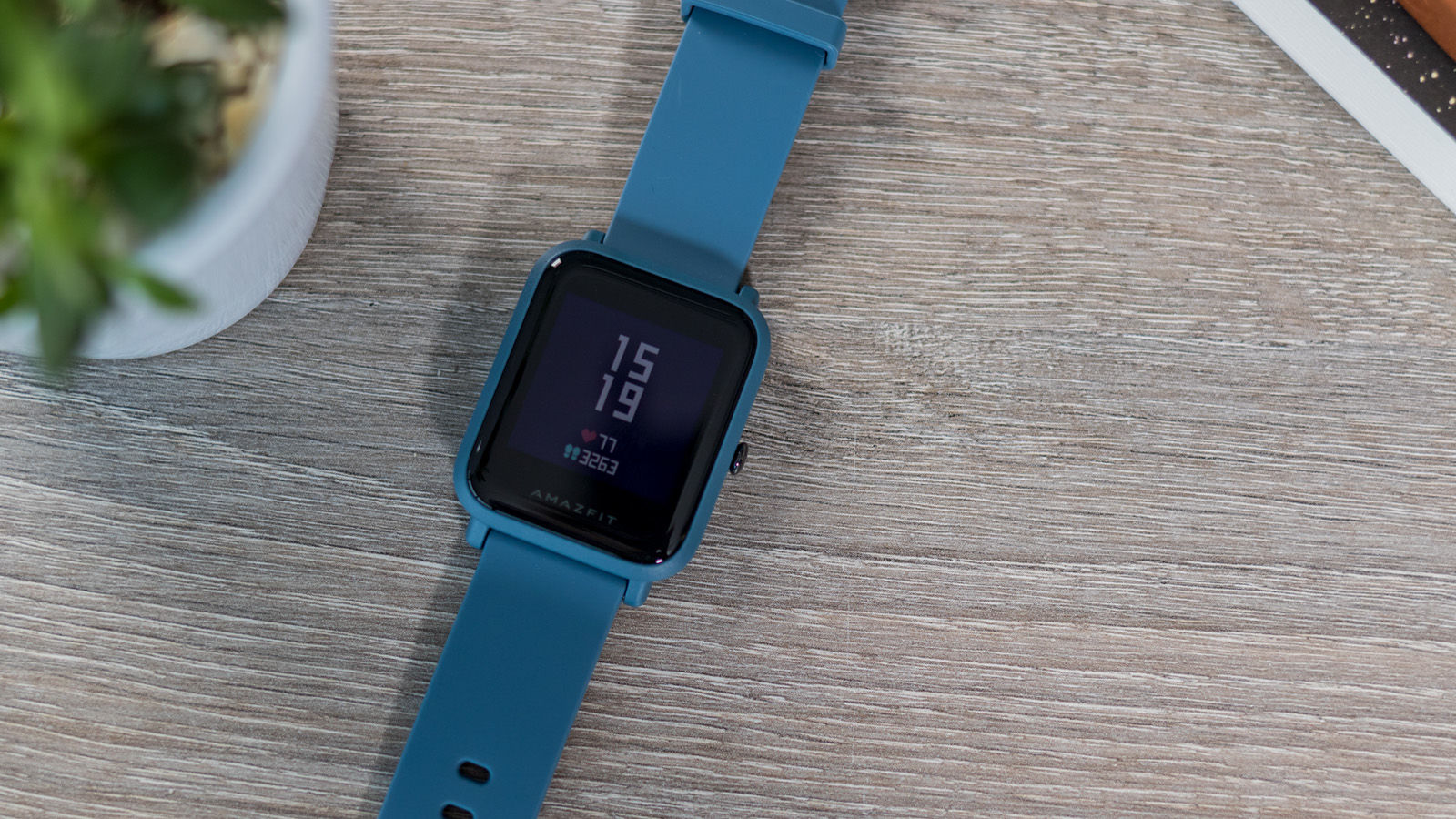 One thing that proved to be a little dodgy at times was the heart-rate tracking. Whilst it’s great that this feature is always-on – so you can read your pulse at any given moment – there were a few readings that had me nearly calling an ambulance; displaying ridiculously high readings when, for example, simply sitting at my desk. Refreshing the screen produced a completely new (and more plausible) reading too.

Though the other features outside of the fitness tracking abilities are limited, they’re still reasonably easy to access. You can take a look at the weather, set notifications, alarms and add timers – and all these things work as expected. However, it doesn’t quite boast enough features to be considered a fully-fledged smartwatch.

On the Amazfit app you can take a look at your daily step progress, which shows how far you’ve travelled, as well as when you switched between a fast and slow pace. You can also check out your daily average for the month – a good way to see if you’re making progress with getting out and about.

On the hero page, you can also see your resting heart rate, your most recent tracked activity and your weight – something you input when you first pair your device to the app. You can take a further look at the activity logged, which will show your heart rate during exercise. If you had your phone with you – it’ll also show a map of your route.

You can access previously logged exercises from other Amazfit products – so if you’ve upgraded devices, you won’t have lost track of any previous progress. 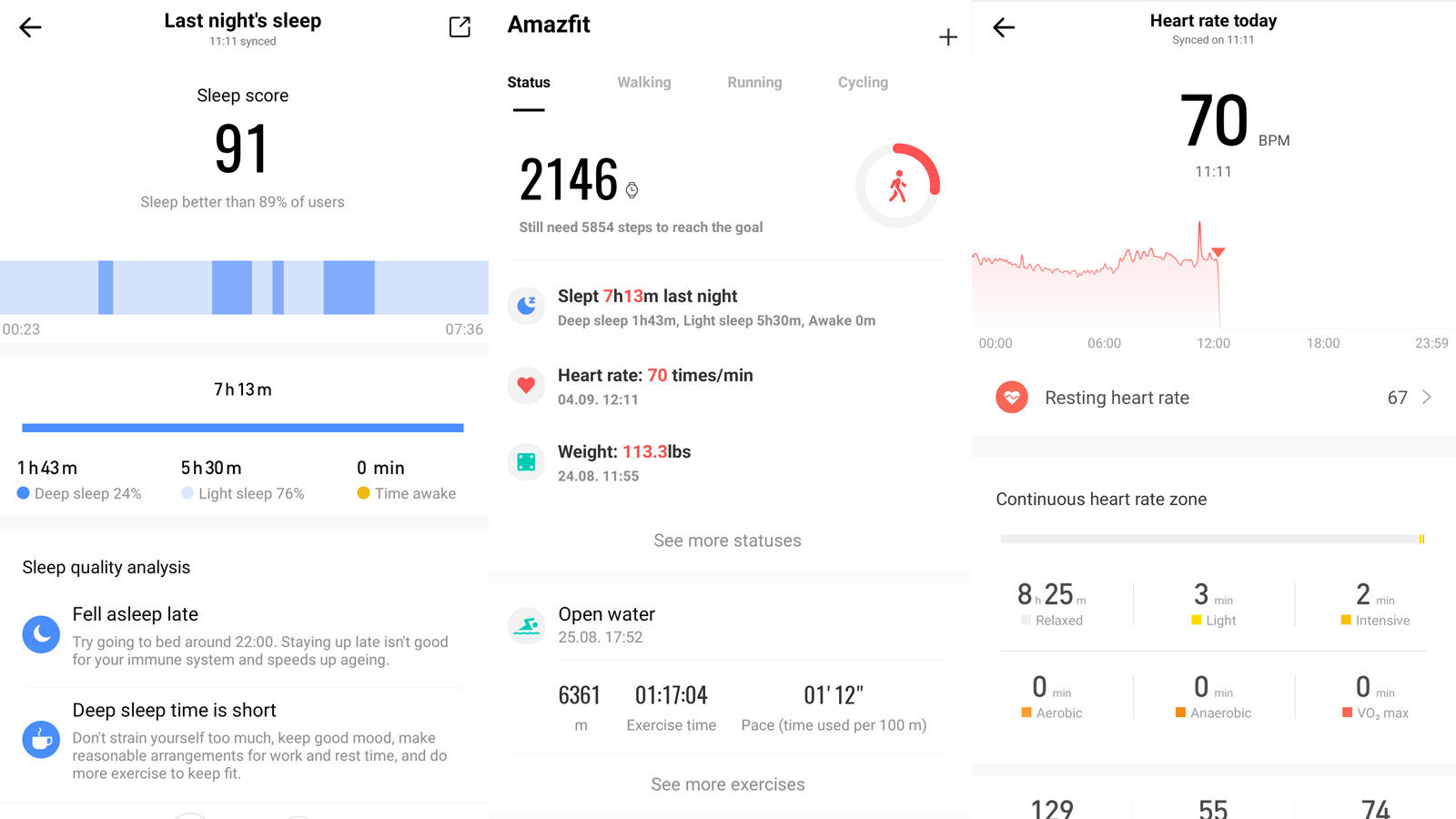 Sleep-tracking is the same as on other Amazfit watches. The app gives a breakdown of your sleep patterns, showing where in the night you achieved REM. However, again this isn’t always 100% accurate. For example, one night I was aware that I’d had very broken sleep and yet the Bip Lite didn’t reflect this in its tracking data.

In comparison to something like the Health Mate App for Withings’ wearables, a lot of the copy and content in the Amazfit app doesn’t appear to be medically backed or extensive enough. The company should consider looking into linking to more information on its heart monitoring and sleep-tracking software, as it helps establish trust between the product and the user.

Having previously reviewed the Amazfit GTR, I assumed that I could just track my progress using the same Amazfit app. However, in our Amazfit Bip review, we used the Mi Fit app for pairing the watch. After a little testing, it seems you can use either app with the Bip Lite, but only one at a time – as otherwise both apps will fail and not synchronise properly.

The website does direct users towards the Amazfit app for the Bip Lite – but it would probably save users a lot of confusion if Amazfit only allowed its products to converse with one app, as they’re essentially doing the same thing but making the whole experience more convoluted for the user. 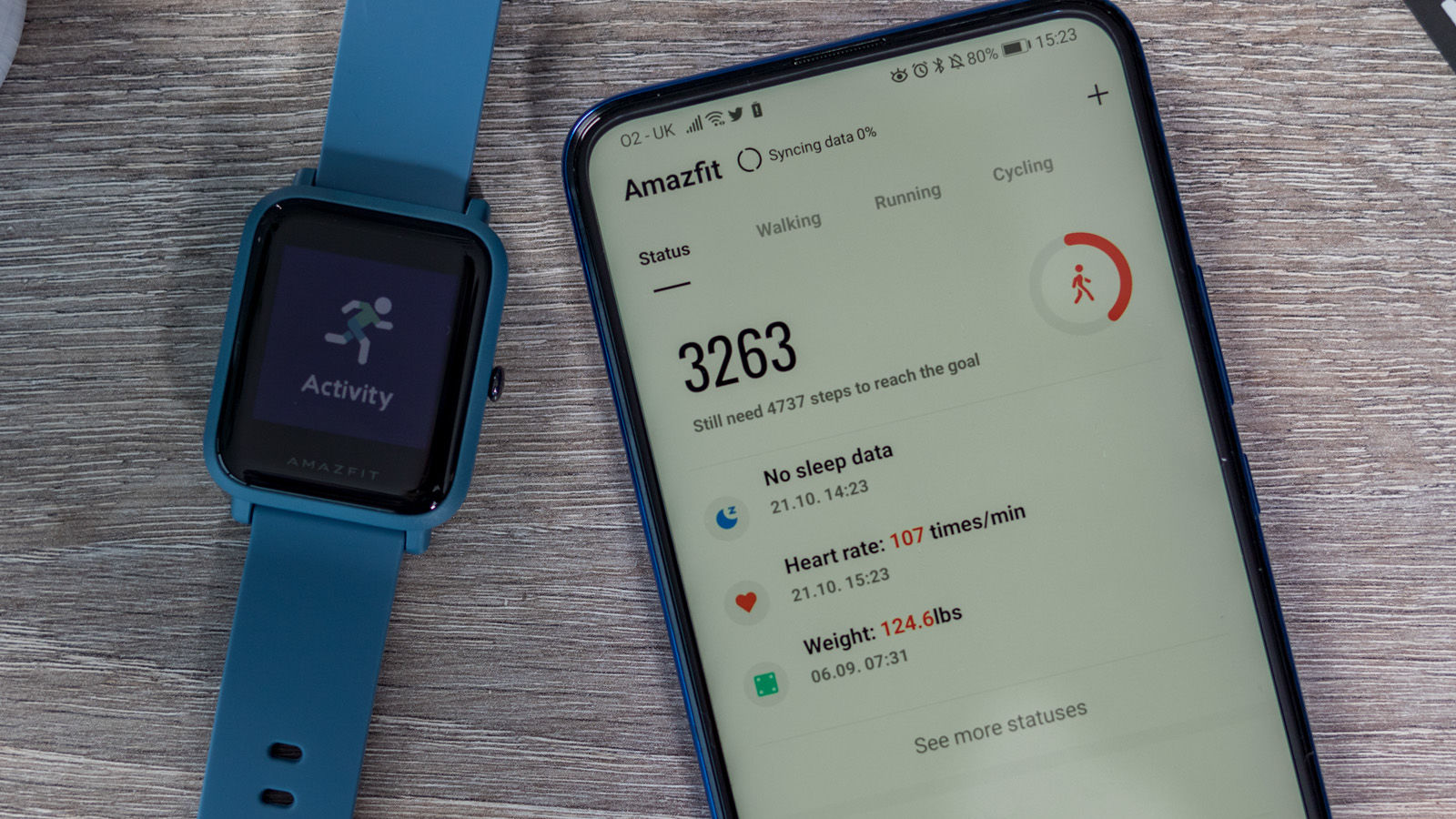 With its lengthy battery life, sporty design and competitive price, the Amazfit Bip Lite may initially seem like a contender for the cheaper fitness tracker market. Its larger, interactive display and phone connective abilities put it ahead of the bog-standard basic rivals too.

However, whilst heart-rate monitoring and sleep-tracking appear impressive on paper, they don’t work as intended in practice. The data isn’t accurate, and some of the claims in the app don’t appear to be medically backed or proven as other fitness trackers do so well.

If you’re looking for a smartwatch/fitness tracker hybrid on the cheap, then this is a decent option. However, if you’d like a more accurate fitness tracker and don’t mind compromising on classic smartwatch design, then we recommend taking a look at the Xiaomi Mi Band 4.