The return of the RAZR signals a turning point for Motorola. Once responsible for the most desirable phone on the market, this new incarnation pays its respects to that 2004 precursor, while also showcasing some of the most cutting-edge technology available on a smartphone. The design and engineering at play are unquestionably impressive and this is the first foldable phone you’ll actually be able to buy in the truest sense of the term. The main question is whether or not the exclusivity and desirability of this new entrant into the foldable market will make up for a high price tag and middling internals.

If you’re around 30, your first phone may well have been the mobile icon that was the Motorola RAZR. Well, guess what? It’s back.

Moto’s signature clamshell took the mobile market by storm when it was first introduced back in 2004 and while the company’s pole position as the creator of the phone to have has since faded, the return of this iconic handset may well serve to reignite interest in the Motorola name and the devices it’s capable of producing.

The long-rumoured return of the RAZR can be viewed through two lenses; one of nostalgia, for the 15-year-old phone popular at the time of Anchor Man and Gwen Stefani’s ‘Hollaback Girl’, or one of innovation, with this serving as Motorola’s first consumer-ready foldable and likely the most affordable foldable on the market, come launch.

Speaking of launch, the phone was shown off to the world publicly in November 2019, with pre-orders in select markets, including the US and UK originally due to start in December.

Motorola delayed the pre-order date citing high interest in the smartphone, but it’s now available to pre-order in the UK exclusively via EE ahead of general release in February 2020. Those in the US have to wait a little later, with pre-orders kicking off on 26 January with an 8 February release. 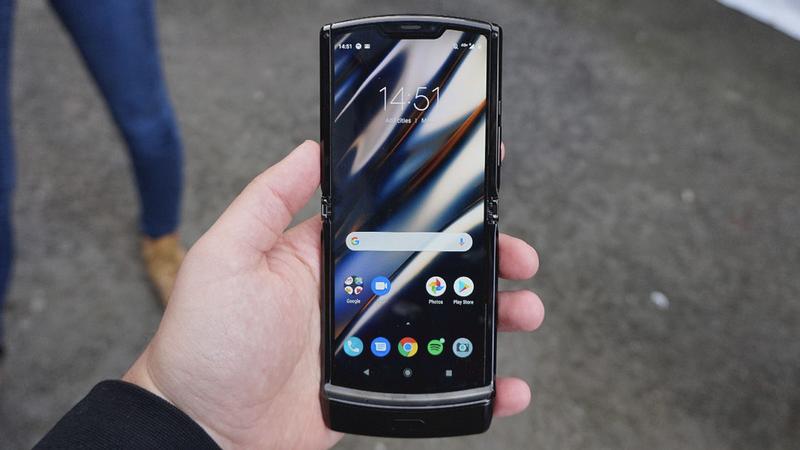 Motorola is planning to use scarcity tactics to drive up hype for the new RAZR at launch, placing it on a pedestal of exclusivity and desirability – a trick we’ve seen from the likes of Nintendo (with the Wii), Snap (with Snapchat Spectacles) and Starbucks’ Unicorn Frappucino – to name but three big brands who’ve benefitted from such a strategy in the past.

As such, beyond fulfilling pre-orders, those after this modern take on the iconic clamshell may well have to wait a while to actually get their hands on one (the company did clarify, that after the initial launch period, the phone will become more readily available).

Up until this point, the foldables that have been most heavily showcased, namely Samsung’s and Huawei’s efforts, take the form of tablets that fold down into phone-like devices. The RAZR is different, borrowing from the original, this handset operates as a conventional Android smartphone that folds in half, down to something markedly more compact.

Beyond simply reworking the original RAZR design for the smartphone era, Motorola claims that opting for this style of foldable form over what the competition is currently working on comes from user feedback. According to the company’s research, most users are happy with the size of their device’s screen, but they also think their phones are simply too big, especially if you tend to keep yours in a pocket, rather than a bag. 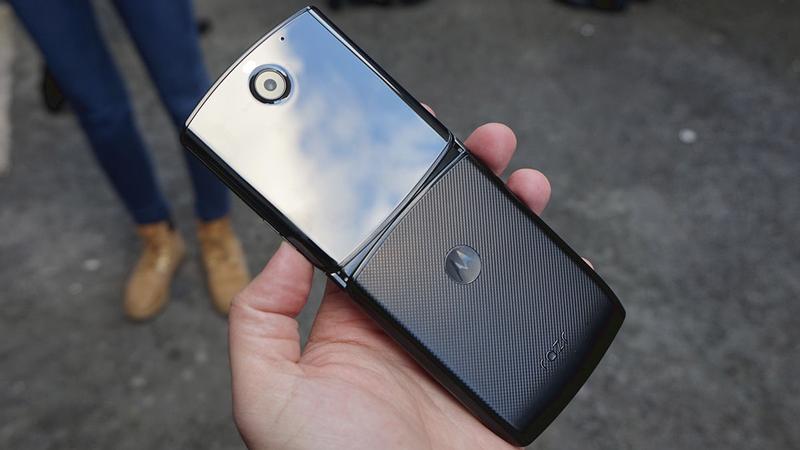 As such, the new RAZR’s 6.2in FlexView display uses a bi-folding (dual-hinge) mechanism to pack down into a near-square footprint, with a sub 14mm profile (the same thickness as the original RAZR), while opening it back up gives you 6.9mm thickness across each half, save for the ‘chin’.

Those familiar with the OG RAZR will recognise the chin, it’s a necessary part of the phone’s construction, used primarily to house its antennas, but it also doubles as an instantly recognisable piece of RAZR aesthetic, with a curved silhouette, similar to that of the 2004 model.

At its base, you’ll find a speaker grille and a USB-C port – there’s no headphone jack on this new model, with Motorola instead including a 3.5mm adapter in-box and pairing it with some tuned RAZR-branded Denon earbuds. 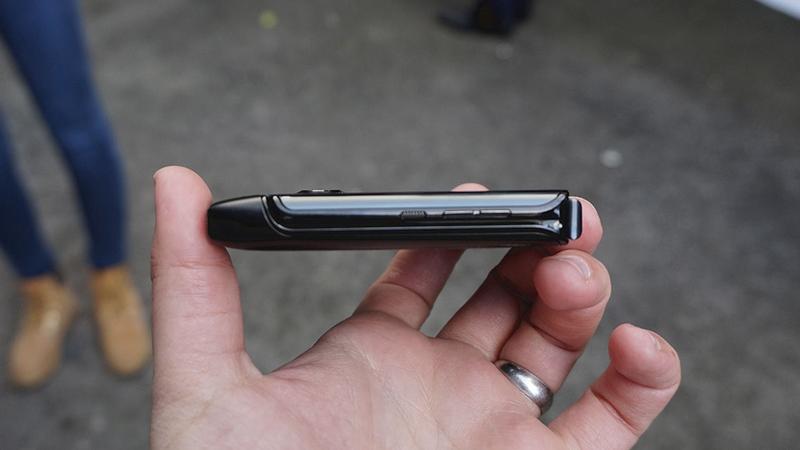 As for the rest of the body, it’s a beautifully elegant mix of materials: a Gorilla Glass front (that’s admittedly extremely fingerprint-prone), along with a stainless steel back that’s been coated and textured in resin, providing a distinct feel that should help reduce the chance of this £1500+ phone tumbling from your grasp.

At launch, the new RAZR will come solely in Noir Black but the company did confirm that other colourways are under considering and should arrive in future – an important note considering colour choices helped propel the original phone into the status simple it became known as.

The interaction between the flexible pOLED display and the hinge system is an undeniable feat of engineering. There are discernable gears either side of the display at the hinge point with interlocking teeth that, when you fold the phone shut, mesh together to ensure the dual hinges move consistently and securely.

What you don’t see are a set of stainless steel plates behind the screen which lock into place when you open the phone and move out the way when you close it. When the display is flat, these plates support the hinge point across the width of the display, so that when you tap and press along this central axis, it doesn’t deform or flex under your finger. 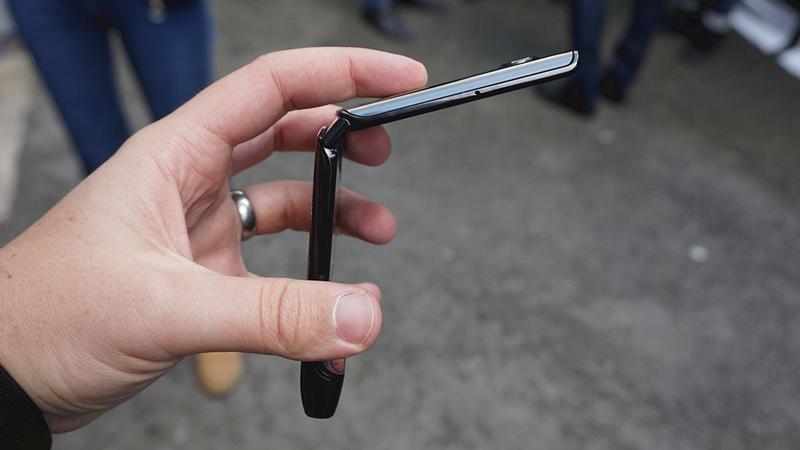 Look closely and the entire display assembly shifts down into the phone’s chin slightly as you fold it closed, with the screen then gathering in the cavity created by those plates moving out of the way. This extra space allows the RAZR to achieve a zero-gap finish, something the Galaxy Fold, which also opted for an internal folding screen, is unable to achieve.

Motorola also says that, like the rest of its phones, the new RAZR is nanocoated with a water repellant treatment, but the phone also features additional protection, to ward off dust and dirt ingress – a key problem area for the Galaxy Fold when it first launched.

To reinforce confidence in the phone’s hinge design, Motorola is also pairing the RAZR with a two-year warranty, as well as an optional extended care program that covers screen failure beyond that time frame for users who want it.

As for display quality, beyond the impressive material sciences and engineering at work, actual image quality from the HD panel is pleasant but not astounding in any particular way. The phone’s tall, slender frame is dictated by the screen’s 21:9 aspect ratio, paired with that chin at the bottom, extending its appearance even further. 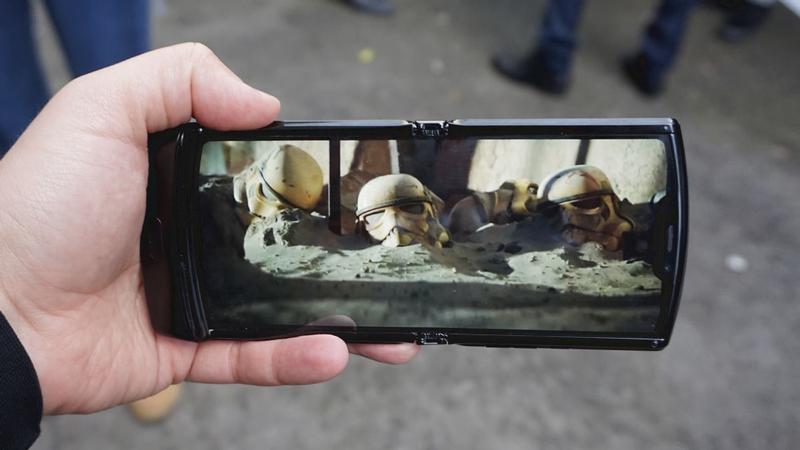 As the ‘CinemaVision’ branding implies, in a similar approach to Sony’s Xperia 1 and Xperia 5, the new RAZR is ideal for enjoying wide content. That said, it’s worth noting that there is a notch, which houses the phone’s earpiece and front-facing camera, that could get in the way when watching media in full screen.

As with the build quality of the RAZR’s bodywork, for a flexible plastic panel, the phone’s primary screen feels perfectly happy being poked and prodded. While it’ll likely show dings and scratches more readily than a glass-fronted alternative down the line, the ability to fold the phone shut and tuck it out of harm’s way should alleviate the risk of such damage somewhat.

While the design and engineering of the RAZR are unquestionably impressive, the device doesn’t offer quite the same bombastic approach to its software and internals.

For a phone launching in 2020, that fact it comes running Android 9.0 is a little underwhelming considering the OS’s successor, Android 10, will have been out for almost four months by the end of January. 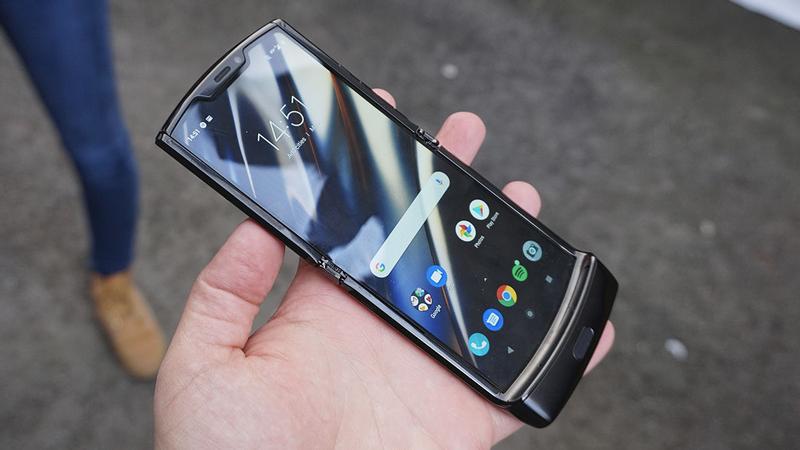 Motorola’s characteristic tweaks to the base Android experience go some way to smoothing out the disparity, though, with smart additions like gesture-based shortcuts to the likes of the camera and flashlight (whether the phone is open or closed) and multiple navigation options.

Like the original, the new RAZR does possess a second screen on the outer face of the lid. What Motorola is calling the QuickView display, there’s a 2.7in 16:9 glass OLED display that shows you the time and any pending notifications.

It can also act as a viewfinder, letting you use the phone’s main camera while it’s still closed, as well as granting access to the Google Assistant, quick-responses to notifications and media controls. You can even summon Google Pay and tap to make purchases using NFC, without opening the RAZR up. 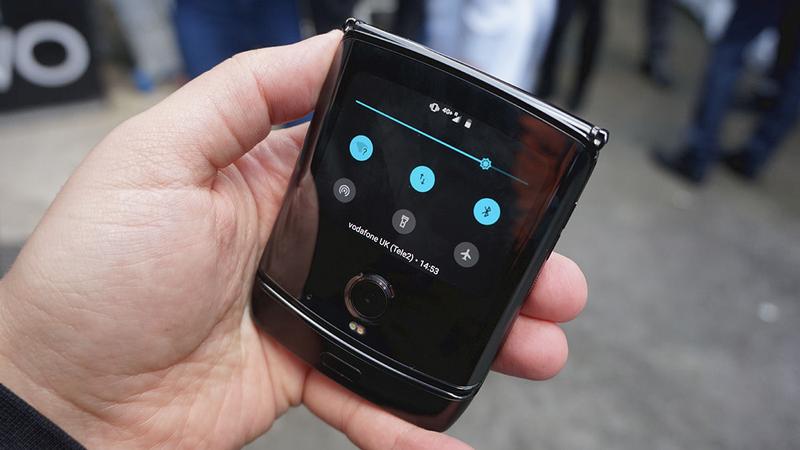 A nice sweetener for those with fond memories of the 2004 original is the inclusion of ‘Retro RAZR’ mode. Accessible from the phone’s quick settings, you’ll jump into a custom skinned launcher that perfectly recreates the user interface of the original, right down to the boot-up animations and sounds.

This isn’t a suitable stand-in for the standard Android UX, however, with only partial functionality. As an easter egg, though, it’s existence is wholly welcome.

While Motorola’s more mainstream phones embrace multiple sensors, the RAZR strips things back, with a single 5MP front-facer and a primary 16MP f/1.7 snapper on the outer lid. 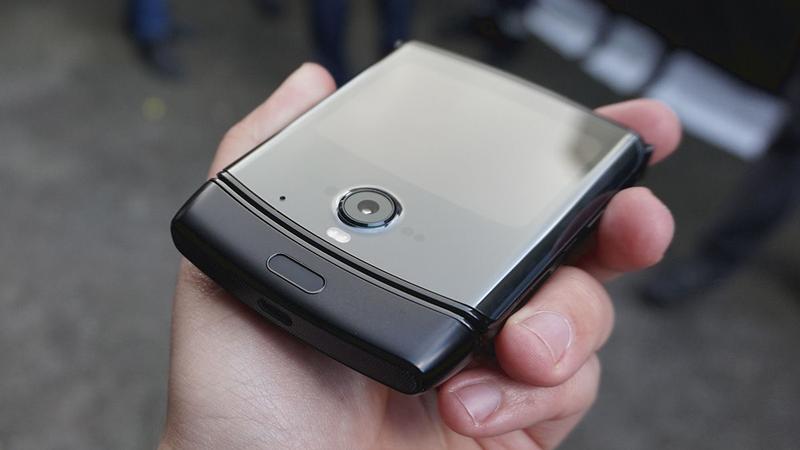 The Sony Exmor RS sensor at work isn’t anything special, based on initial impressions, with AI-supported imaging talents and the company’s signature Night Vision low-light shooting mode featuring thanks to the chipset at work. Image quality doesn’t look like it’ll give similarly-priced rivals cause for concern.

We’ll need to test this setup more thoroughly before truly passing judgement, though.

Like the camera setup, on first-impressions, the internals of the new RAZR don’t exactly bowl us over. One of Qualcomm’s more powerful mid-range Snapdragon chipsets, the 710, runs the show, paired to a 6GB of RAM, with 128GB of non-expandable storage in-tow. 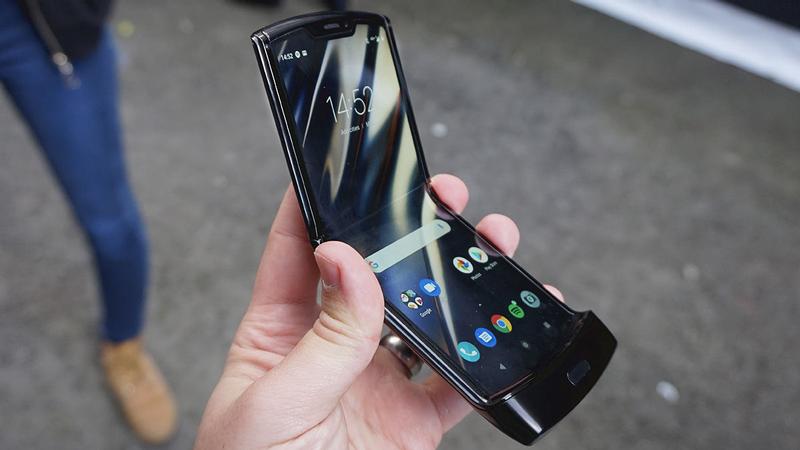 The choice of silicon seems a bit problematic considering the phone’s asking price but it does help clarify why this still works out to be the cheapest foldable currently available.

As for longevity, a 2510mAh capacity, split across two cells (one in each half of the RAZR’s folding form) sounds woefully small considering most high-end Android devices start at around 3500mAh and only go up from there. Despite this, Motorola sounded confident when promising that the phone could deliver all-day battery life and the fact that it supports 15W TurboPower fast charging as well.

Delivering on the reality of the foldable phone, Motorola looks likes it’s produced a device that both respectively recaptures the magic of the original clamshell and showcases the company’s latest technological efforts in an impressively complete package.

Beyond the screen and body, the hardware falls short of the mark if weighed against more conventional smartphones phones at a similar price but doing so misses the point of this new RAZR. It probably won’t sell in droves but it has the potential to be one of the most desirable phones at the outset of 2020.