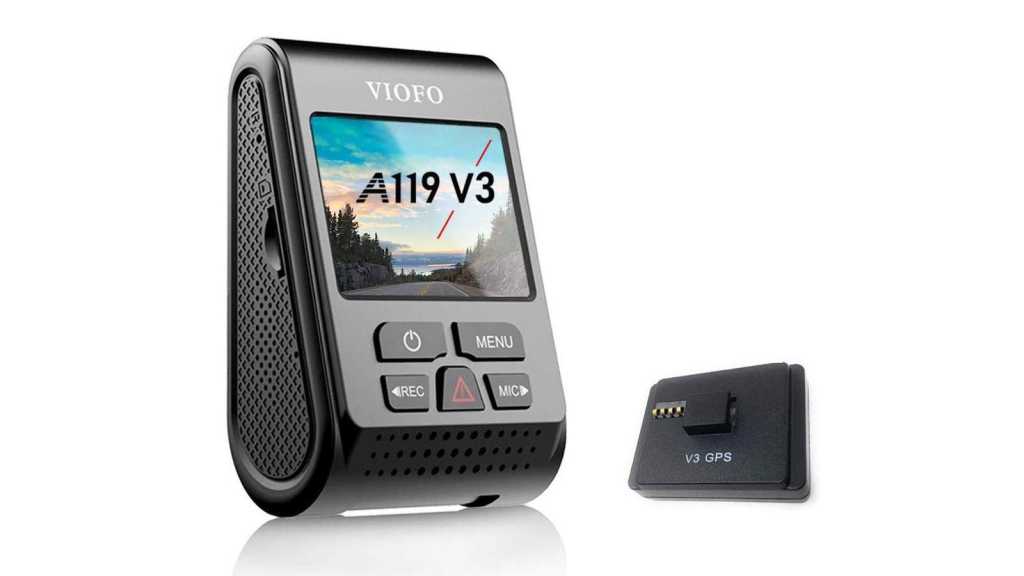 If you want good-quality video and recording when your car is parked, the A119 v3 is a great dash cam.

Viofo has quickly made a name for itself by providing quality dash cams at low prices. If OnePlus made a dash cam, it would probably be just like the A119 v3.

The v3 gives you a bit a clue here: it’s the third generation of this model and offers buffered parking modes, plus time-lapse. Read on to find out more.

You can buy the Viofo A119 v3 from Amazon, or direct from Viofo. It costs £99.99 or $119.99 if you’re in the US, but note that this price includes the optional GPS mount, so watch out for cheaper deals which may exclude the GPS. Obviously, that’s fine if you don’t want GPS, but we think it’s a useful feature as it means your location, speed and the time can be imprinted on the video, leaving no doubt about the when and where a collision occurred.

You can also get a polariser for the A119, and the CPL for older models with fit the v3. A polariser cuts down on reflections from the windscreen and can mean a better-quality image with more contrast. Amazon charges £12.99 for the  Viofo polarising filter.

One accessory you almost certainly will need is the £12.99 / $12.99  HK3 hard-wire kit. Without it you won’t be able to use the parking modes. (You can use a USB power bank, but this is a hassle as you’ll have to switch into and out of parking mode manually, whereas with the HK3 kit it will happen automatically.)

The A119 shares a similar design to the A129, reviewed. The wedge-shaped design is our preference for a dash cam as it means it hugs the windscreen and is far less obtrusive than dash cams which hang down on suction mounts. Usually, you can tuck it away behind a rear-view mirror so it’s out of sight.

Doing so can make it a bit awkward to see the 2in screen and use the five buttons to adjust menu settings, but once set up, you shouldn’t need to see the screen or press any buttons anyway.

As the camera slides off the adhesive mount it can still be removed from the car easily enough when required, and since the USB cable plugs into the GPS mount and not the camera, you don’t even have to unplug any wires.

If you don’t use the hard-wire kit, a long mini USB cable is supplied with a handy twin-USB car charger that allows you to charge a second device as well as power the dash cam.

Rather than increase the price, Viofo does away with unnecessary extras such as Wi-Fi. It’s much quicker and more convenient to plug the camera into your laptop (or remove the microSD card and insert it into a card reader) than to connect your phone to a dash cam’s Wi-Fi, launch an app and wait while the large video files are transferred at a tediously slow pace.

Note that no microSD card is included, but the A119 v3 supports up to 256GB cards. Again, that’s great because it means more hours of stored footage before the oldest files begin to be overwritten.

Unlike some dash cams which can record at a slow frame rate while parked, the A119 uses a super-capacitor instead of a battery. Capacitors are better suited than li-ion batteries as they can withstand the huge temperature range that dash cams have to endure, but it does mean the A119 needs external power to operate.

That’s why you need the HK3 hard-wire kit if you want to use the parking modes. Once the 12V and acc wires are connected to your car’s fuse box (and the earth to a suitable earth point) you’ll be able to set up the buffered parking mode.

The buffered part is important, because unlike dash cams which only start recording when they detect motion, the A119 v3 can record 15 seconds prior to motion being detected through to 30 seconds after. It will record if it detects motion or if the G-sensor is triggered by an impact.

If you park with the camera facing a busy road, you’ll find the SD card will fill up rather quickly. Plus, it may record for a shorter duration as it’s using up your car’s battery more quickly. A switch on the hard-wire kit has settings for 11.8V, 12V, 12.2V and 12.4V (plus their 24V equivalents), so the camera will stop recording when the battery gets down to the level you’ve set, preventing it from becoming too discharged to start your car.

There are two other modes to choose between if you don’t want to use buffered recording: a low-bitrate (lower quality) recording or time-lapse (low framerate).

Compared to most dash cams at this price, the A119 v3 produces better image quality both during the day and at night.

Even when recording at 30fps, images are still sharp when you pause the video and it’s usually possible to make out the registration plates of any vehicles in the frame, so long as they’re not too far away.

At night, the image is brighter than you’d get from most rivals, but of course it’s almost always impossible to see any registration plates unless you’re pulled up close behind another car in stationary traffic.

Just as importantly, the A119 v3 proved very reliable in our tests, coping with both high and low temperatures – just as it should with that super-capacitor on board.

If you don’t need frills such as Wi-Fi or lane-departure warnings, the A119 v3 is a great choice. It does the essentials well, recording very good quality video and offering that useful buffered parking mode that will hopefully provide the evidence you need should anything happen to your car while its parked and you’re elsewhere.