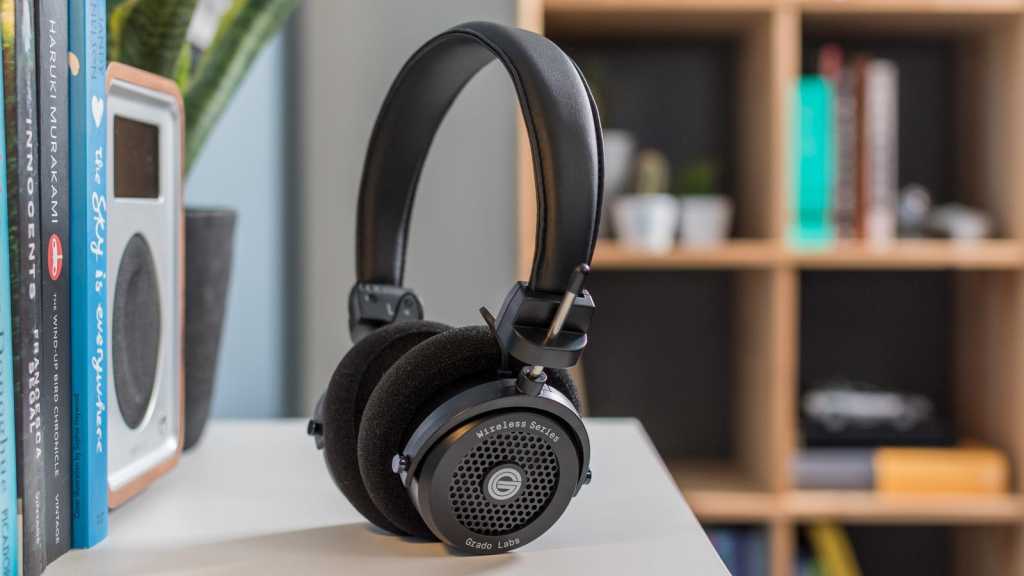 If you love the idea of Grado headphones but can’t countenance a wire in the year of Lord 2019, the Grado GW100 are exactly what you’re looking for. They have all the strengths – and weaknesses – of Grado’s core lineup, but cut the cord. Use them at home and you’ll love them, but try to take them out and you won’t: everyone near you will hear your music, and you will hear everything else around you.

Grado is a company that makes really, really good wired open-back headphones that sound phenomenal – so long as you don’t mind everyone around you hearing them too. That means they’ve always been best to use indoors, and on your own, where all that sound leak doesn’t matter so much.

All of this is to explain why Grado took so long to get around to releasing a wireless version of its classic cans. People want wireless headphones that they can use on the go without forcing the whole train carriage to listen along with them (well, except AirPods owners apparently) and Grados were not that.

With the Grado GW100 wireless headphones, the company says it’s managed to seal in the sound without losing the open soundscape. That sounds too good to be true – and to some extent it is – but these do deliver something close to what you’d expect from Grado, both good and bad, without a wire in the way.

The GW100 cost £199/$249, which puts them closest to the company’s SR225e model. You can grab them from Grado yourself (in the UK or the US), though they cost less from Amazon right now.

It puts them around the middle of our best headphone chart in terms of price, and comfortably below the roughly £300/$300 that you’d pay for the Sony WH1000XM3 or Bose Noise Cancelling 700 – they offer equally robust sound, but as high-end noise-cancelling headphones they’re a very different beast. Unfortunately, since these are the only open-backed wireless headphones around, there’s nothing else quite like them to compare to. 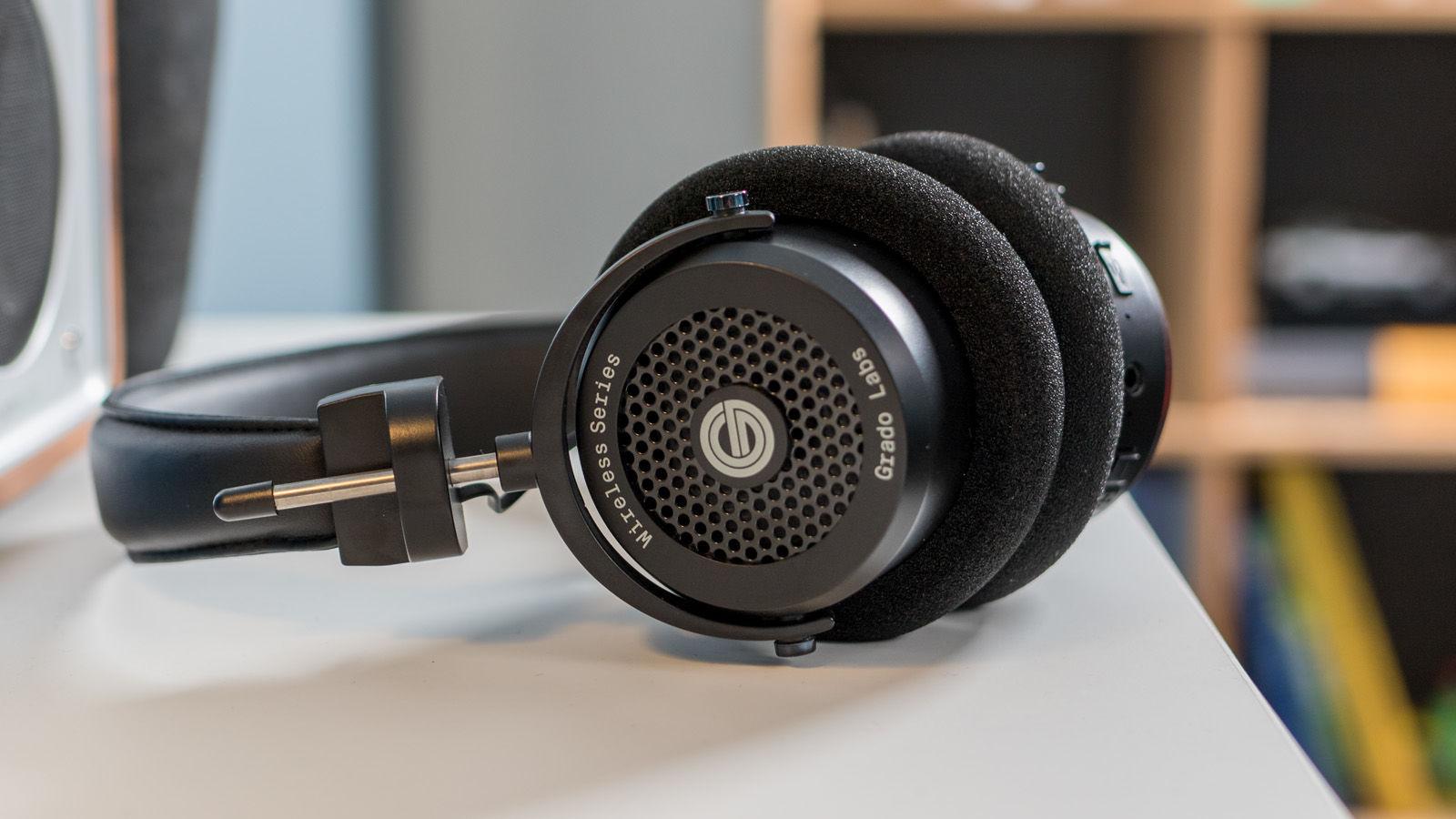 Design and build: The good, the Grado, and the ugly

The Grado GW100s look like every other pair of Grados out there (at least from the core Prestige range) – and thank Grado for that.

The company has an aesthetic that’s about as iconic as any audiophile headphone company could muster, and has wisely chosen not to upset the boat for its wireless model. At first glance you could mistake these for any of the company’s core lineup, just without the cord.

It’s an unashamedly old-fashioned design – dare we say it: ‘retro’ – that stands out amidst a sea of similarly minimalist modern headphones. They look like high-end audio gear rather than high-end tech, if that distinction makes sense, and immediately bring to mind vinyl collections and towering hi-fi stacks.

Even the controls are simple, with a power button and volume controls on the left cup, and that’s basically it. 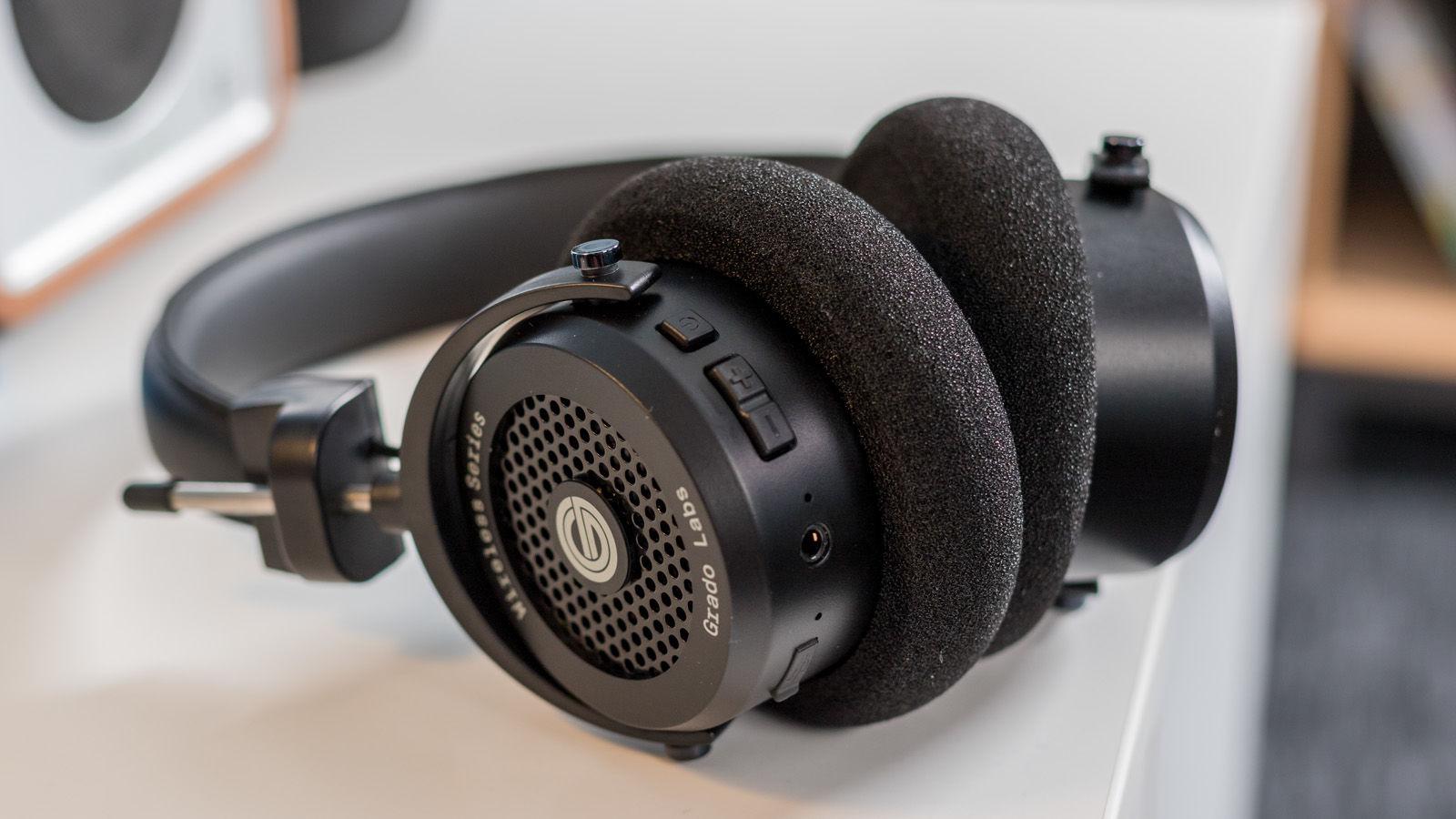 There’s a downside to this too though. Grado has bravely kept its design almost unchanged through decades of design trends, but has missed out on most of the ergonomic improvements over the years too.

Worst are the foam earpads, which are light and breathable but equally itchy and scratchy, and do absolutely nothing to block out outside sound. Then there’s the headband, which does little to distribute the headphones’ weight, leaving the brunt of it on your ears themselves. I didn’t find the GW100s uncomfortable the whole time, but a couple hours’ consecutive use was enough to make me pretty eager to get them off.

All of this is basically to say: there are still Grados, for good and for bad. They look fantastic – to an old-fashioned taste at least – but there are compromises on comfort, and Grado has made no concessions here to either modernity or the wireless form factor. 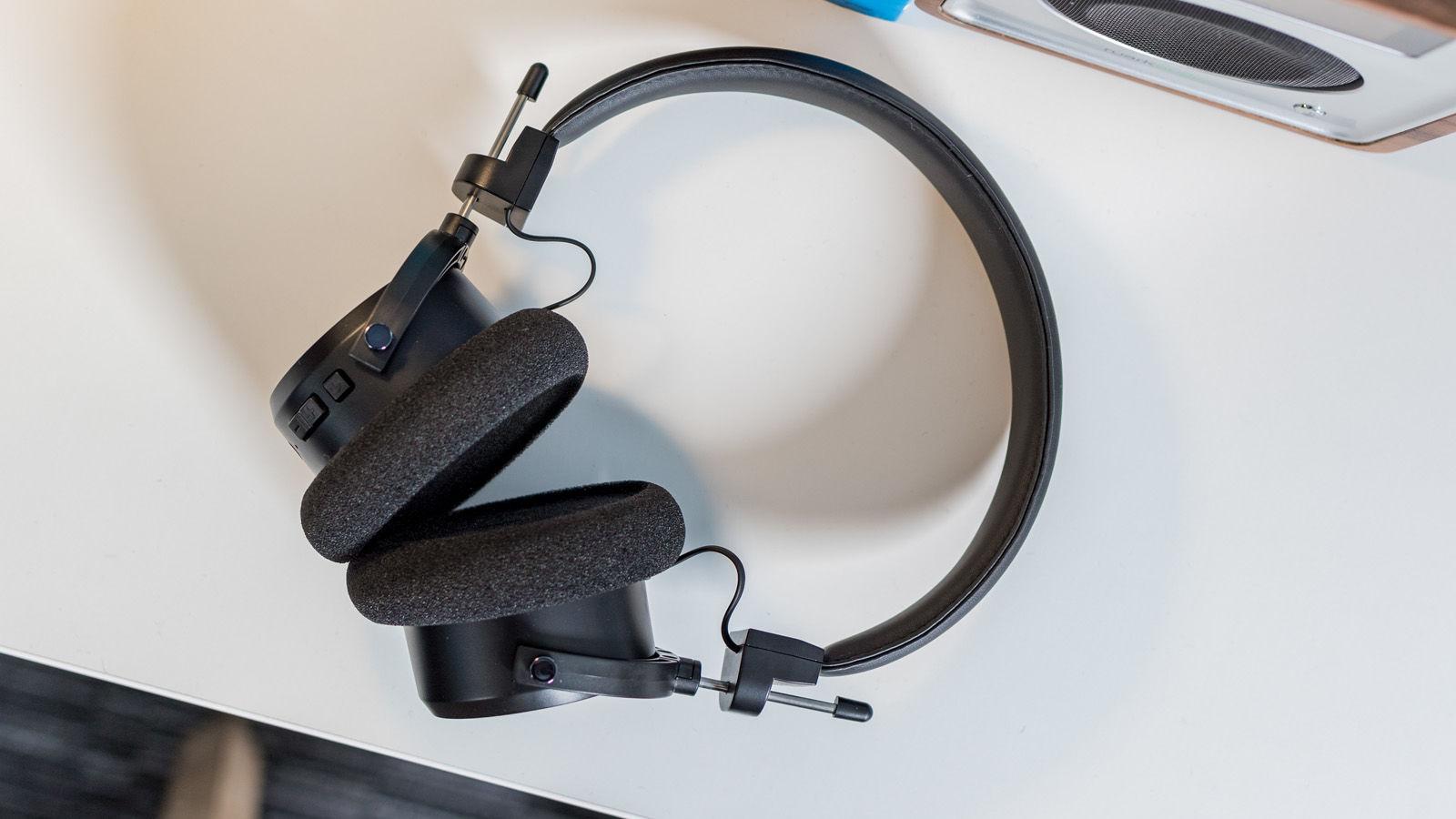 Audio and performance: Sounds worth sharing

Grado specialises in open-back headphones, which do exactly what they say on the tin: holes in the earcups allow sound to escape out the back. That’s for good reason, as it creates a more expansive soundscape that’s crisper and clearer, with no muddy mids mushing together.

The twin downsides are that those holes also let outside audio in (imagine the polar opposite of noise-cancelling) and that all that audio leaking it is, well, audible for anyone else nearby. The result is that open-ear headphones are essentially not great in loud environments and are downright anti-social in busy ones, so they’re really best for listening at home or anywhere else in private.

If that’s what you want to use the GW100s for, then I’ve got great news for you. These sound almost as good as classic Grado cans like the SR80e, with a neutral audio profile, astonishing clarity, and a soundscape that’s just as expansive – I’m sure Grado obsessives will be able to spot the difference, but most of the rest of us won’t.

The bigger question then is whether Grado’s audiophile audience will really be willing to trade the convenience of wireless for the inevitable drop in quality you get from Bluetooth audio – and pay a premium for it – but in this respect the company has done about as good as job as you could expect.

It’s a shame that they only support Bluetooth 4.2 – not the higher quality 5.0 – but there is at least AptX support, which helps close the quality gap with the wired models – at least if you’re using an AptX-compatible source, which doesn’t include iPhones or iPads. There’s also a 3.5mm headphone jack and an included cable, so wired audio is always an option too. 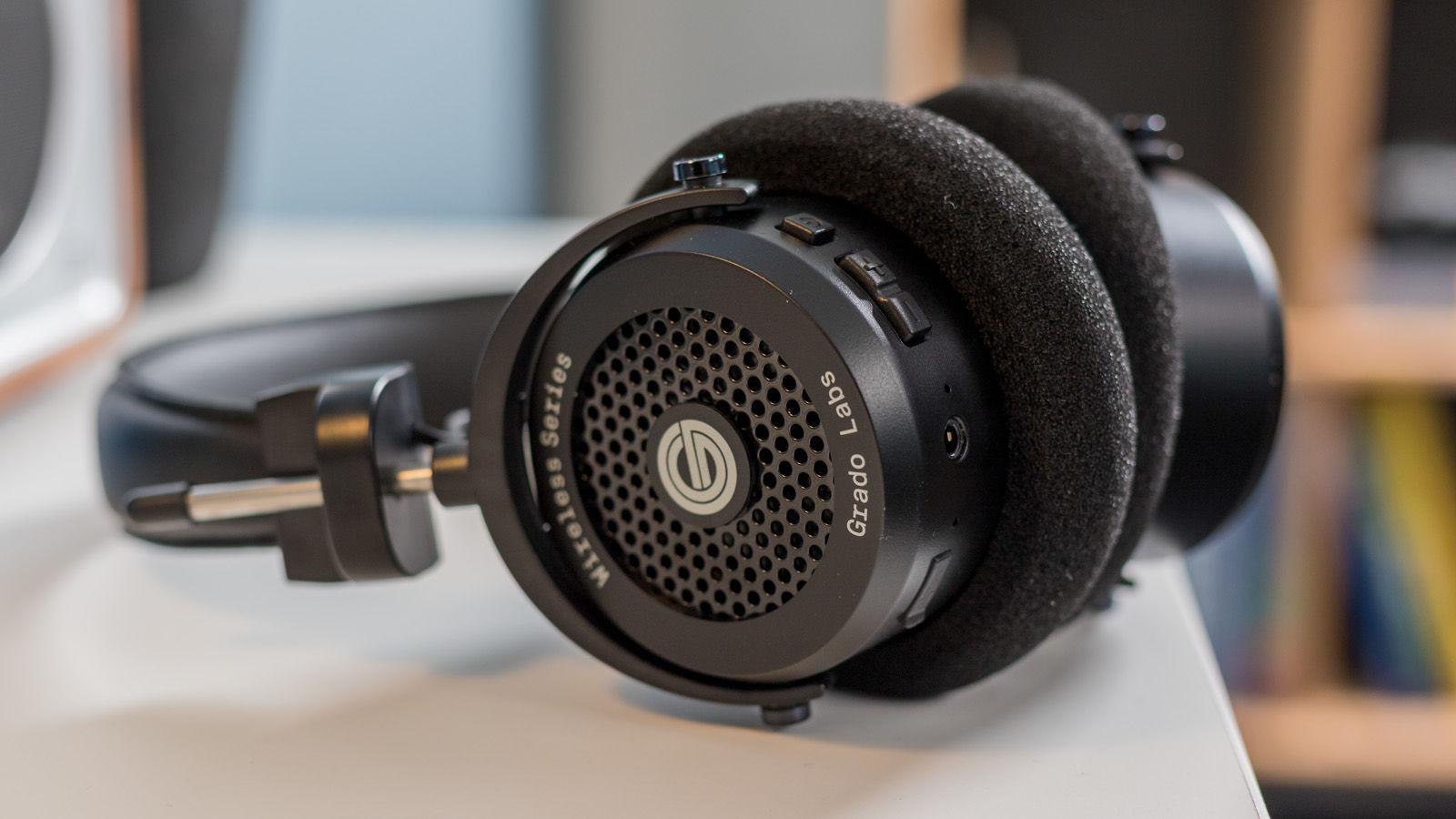 The problem is that Grado isn’t just positioning these as wireless headphones for the house – they’re also pitching them for day-to-day use everywhere else, and here they just don’t hold up.

Through some miracle of engineering there is noticeably less sound leak than on the company’s wired products, despite the similar sound, but there is still more than enough to irritate whoever’s next to you on the bus or make you deeply unpopular in your office.

Even if you’re enough of a sociopath to try and use these on public transport knowing that the sound will leak, things won’t be much better on your end. The same design that lets sound out also lets it in, so you will hear all the rattle and hum of your train, somewhat negating all the hard work Grado put into tuning the sound here.

Matters aren’t helped by the battery life, which at 15 hours is fine but certainly not remarkable. The ‘battery low’ announcements don’t kick in until they’re close to dead too, so you’ll want a Micro-USB charger to hand, and along with the ‘power on/off’ announcements they are set to be incredibly loud for some reason, just to annoy anyone nearby that little bit more.

If you love the idea of Grado headphones but can’t countenance a wire in the year of Lord 2019, the Grado GW100 are exactly what you’re looking for. They have all the strengths – and weaknesses – of Grado’s core lineup, but cut the cord.

What you shouldn’t do is believe the company’s marketing line that these have somehow squared the circle of delivering open-back sound without the leakage. There’s less leaking than before, but still: everyone near you will hear your music, and you will hear everything else around you.

For better or worse then, these are Grados. Use them at home and you’ll love them, but try to take them out and you won’t.