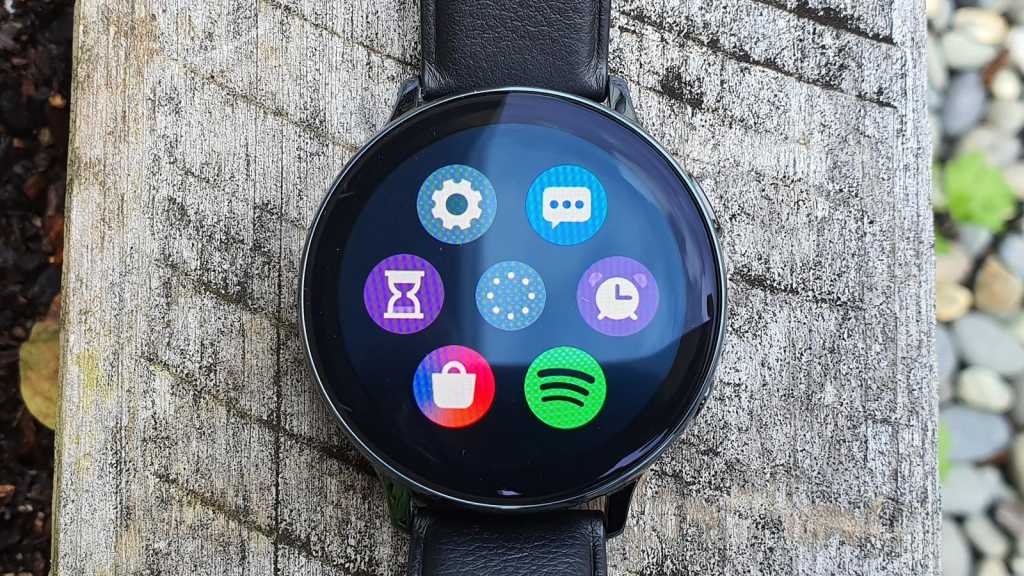 ﻿﻿With two-day battery life, excellent design, and fitness features that don’t overpower the overall experience, the Galaxy Watch Active 2 is one of the best smartwatches you can buy for an Android phone.

In deciding not to run Google’s Wear OS platform on its smartwatches, Samsung has managed to make a solid line of wearables running Tizen OS. The Galaxy Watch Active 2 is an excellent implementation of this maturing software inside premium hardware, even if it’s a little confused as to what it should be.

The ‘active’ branding is misleading, as is the fact it is on sale next to the cheaper Galaxy Watch Active from earlier in the year. But I prefer and recommend this more expensive sequel for its finish and finesse – even if it’s not as completely fitness focussed as it might have you believe.

It’s nearly as good as an Apple Watch, but not quite – and seeing as Apple will never let the Apple Watch work with Android phones, the Active 2 is your best smartwatch bet if you don’t own an iPhone.

This is substantially more than the £199/$199 original (and still on sale) Bluetooth 40mm Galaxy Watch Active. You can also still buy the Galaxy Watch, though discounts are rare. 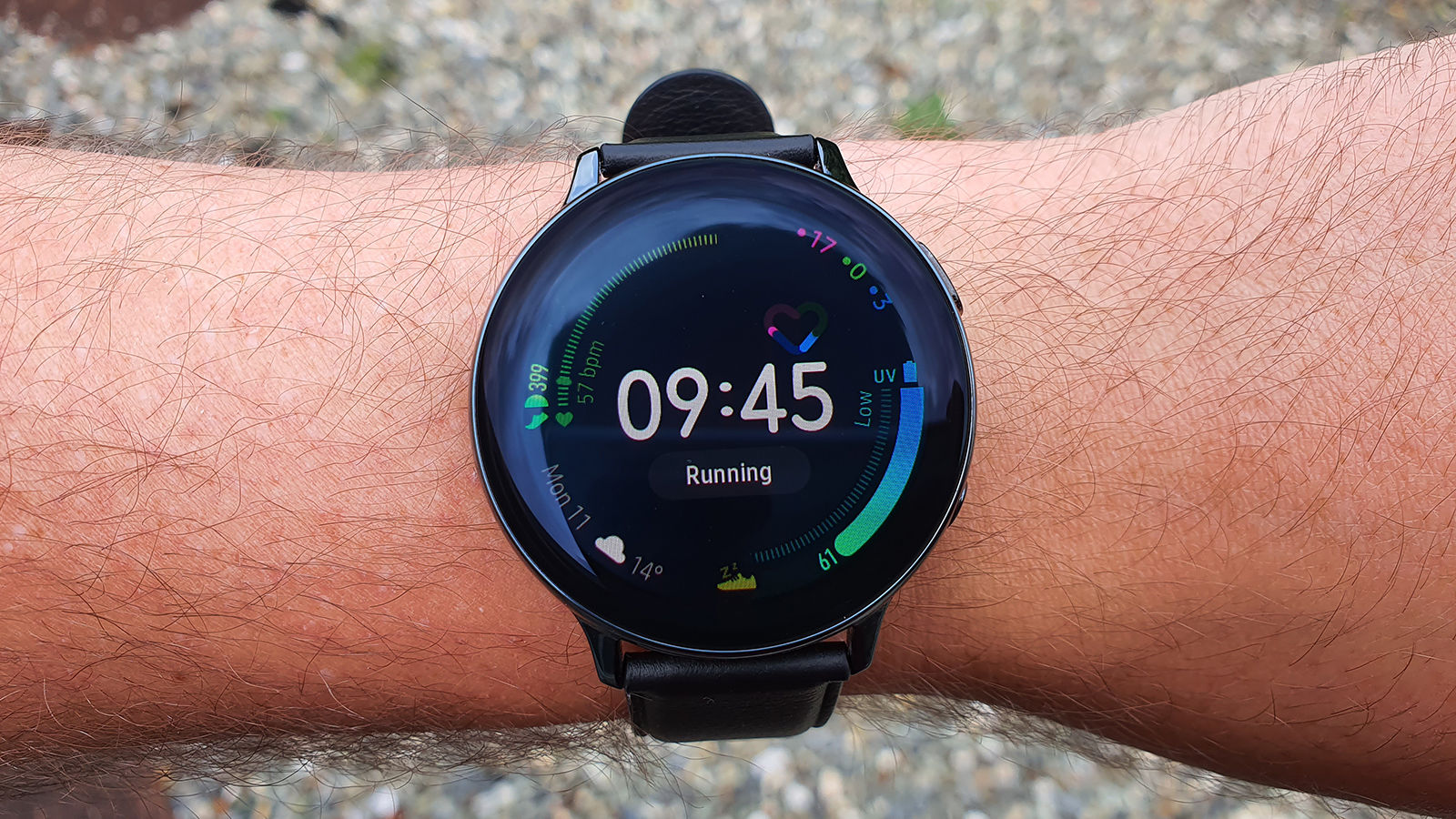 The bezel is in the details

I reviewed the $379 stainless steel 44mm model, but you don’t need to spend that much – get an aluminium one. The extra spend gets you a shinier metal and a leather strap (and 4G in supported regions) but you’ll be just as well off with a silicone strap and an aluminium casing. The 20mm straps are standard fittings, so you can attach any strap you want, too.

I find it a lovely, if overly simplistic design that tends to fly under the radar as a smartwatch given its relatively subtle looks.

Two buttons on the right edge join the touch screen as back and home buttons. A double tap of the home button brings up Bixby by default. Bixby is still bad, and I ended up not using it as it couldn’t do much beyond setting timers and alarms.

The Watch Active 2 reinstates Samsung’s excellent bezel control that was missing on the first Watch Active, but this time it’s a touch sensitive black rim rather than a physically rotating wheel. It’s very well implemented into Tizen, which is based on circular menus and widgets screens that you can easily scroll through with the edges of the watch face.

Only occasionally did I fail to register touches. It’s a great experience, with satisfying haptic feedback like using the Apple Watch’s digital crown. Madly, it’s off by default – dig into the settings and turn it on straight away. There’s no benefit to leaving it off. 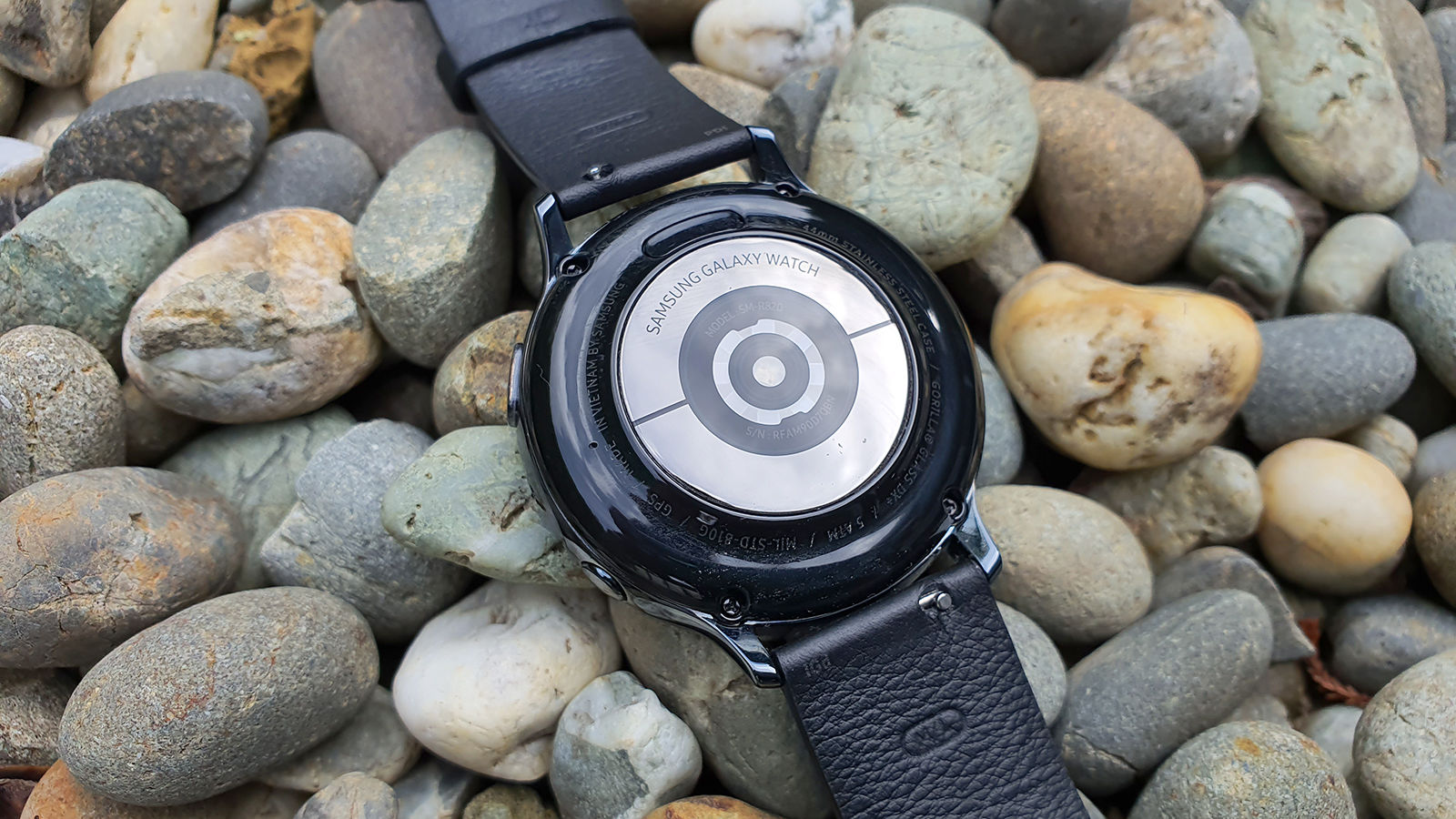 That bezel circles a 1.3in Super AMOLED display on my 44mm review unit (it’s 1.2in if you opt for the 40mm). The display is very good, with the OS wisely based on blacks to conserve battery life and display busy watch faces with great clarity. My favourite is the Health Dashboard+ face that crams in time, workout start button, steps, last heart rate, date, weather, UV rating and exercise goals.

Sounds like a lot, but it’s all displayed elegantly. If that’s not your bag there is a decent first- and third-party watch face store within the Wear phone app for you to tinker with (most are customisable).

The Active 2 works best with Samsung Galaxy smartphones but will also play nice with other Android devices and even iPhones. Without the Samsung phone, you’ll have to download a few more niggly Samsung apps to even get the thing to work.

The best compliment I can pay the Watch Active 2 is that you sort of forget you’re wearing it. Much like the Apple Watch manages to become an augmented part of your phone rather than a try-hard standalone device, so too the Active 2 succeeds in giving you information when you need it but fading back when you don’t.

Some of that comes with which notifications you decide to silence but in general I liked using the Watch Active 2 because it meant I looked at my phone less. If you really don’t want to be distracted by your phone then you won’t buy a smartwatch in the first place, but on this one it’s easy to triage notifications and leave your phone in your pocket.

The always-on display is great, and a reminder that Apple did not come up with this tech first with the Apple Watch Series 5. Having it on is off by default to save battery but turn it on and you can subtly check the time without having to indulge in a flourish of your tech-clad wrist.

The menus on the Tizen OS are intuitive though I found I had to customise my layout substantially for it to completely make sense for my brain. Using the touch bezel or the touchscreen itself, the menus are based on notifications to the left, stacked custom widgets to the right and a separate circular menu of apps. Once you’ve learned where everything is, you’ll be flying around no issue.

Paired with the high-end hardware with 0.75GB RAM, I didn’t experience any slow down on the Bluetooth model, and the LTE version has double the RAM to hopefully cover the extra functionality that I was not able to test out. The LTE version is only available in some regions, but that does include the UK and US. 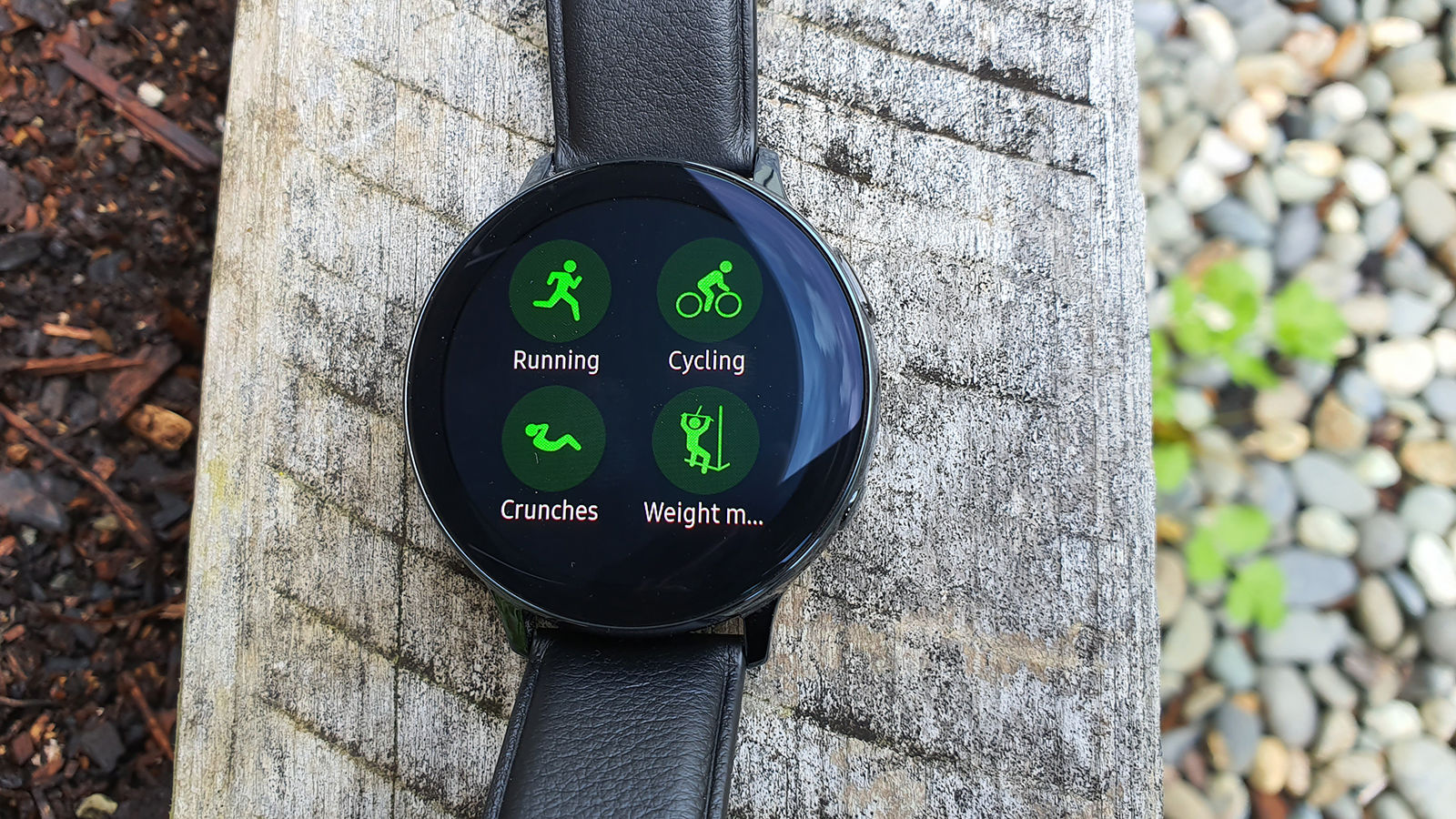 Despite the name I wouldn’t call this an out and out fitness wearable – even though the fitness tracking features are excellent. Where watches from the likes of Garmin and Polar are fitness watches, the Active 2 is an all-round smartwatch.

The ‘active’ name is misleading for two reasons, first that every other current Samsung Galaxy Watch branded device can pretty much do what the Active 2 can do, and secondly because the Apple Watch has proven that basic, competent fitness tracking should be table stakes now for smartwatches.

Samsung uses the ‘active’ branding here rather than ‘lite’ to show the Active 2 is a slimmer, leaner version of the older more business looking Galaxy Watch. It’s very good at the fitness stuff, but it shouldn’t be thought of as a serious fitness wearable for hardcore athletes.

That said, it packs in GPS, sleep tracking, heart rate sensor, Wi-Fi, NFC for Samsung Pay, an accelerometer, barometer and a gyro sensor. Samsung said the heart rate monitor has eight sensors over the original Active’s four and the gyro is more accurate, which should lead to overall more accurate readings. It’s also 5ATM water resistant and can act as a swim tracker.

On an outdoor run the watch tells you your progress via spoken stats that either come through the speaker or headphones if they’re connected. It’s a bit extra so I turned it off, but if you’re training you might find it useful. I also noticed that it’s hard to get the display to turn on with a wrist flick while running, which was quite irritating as I had to push a button. I didn’t have this issue in normal use. 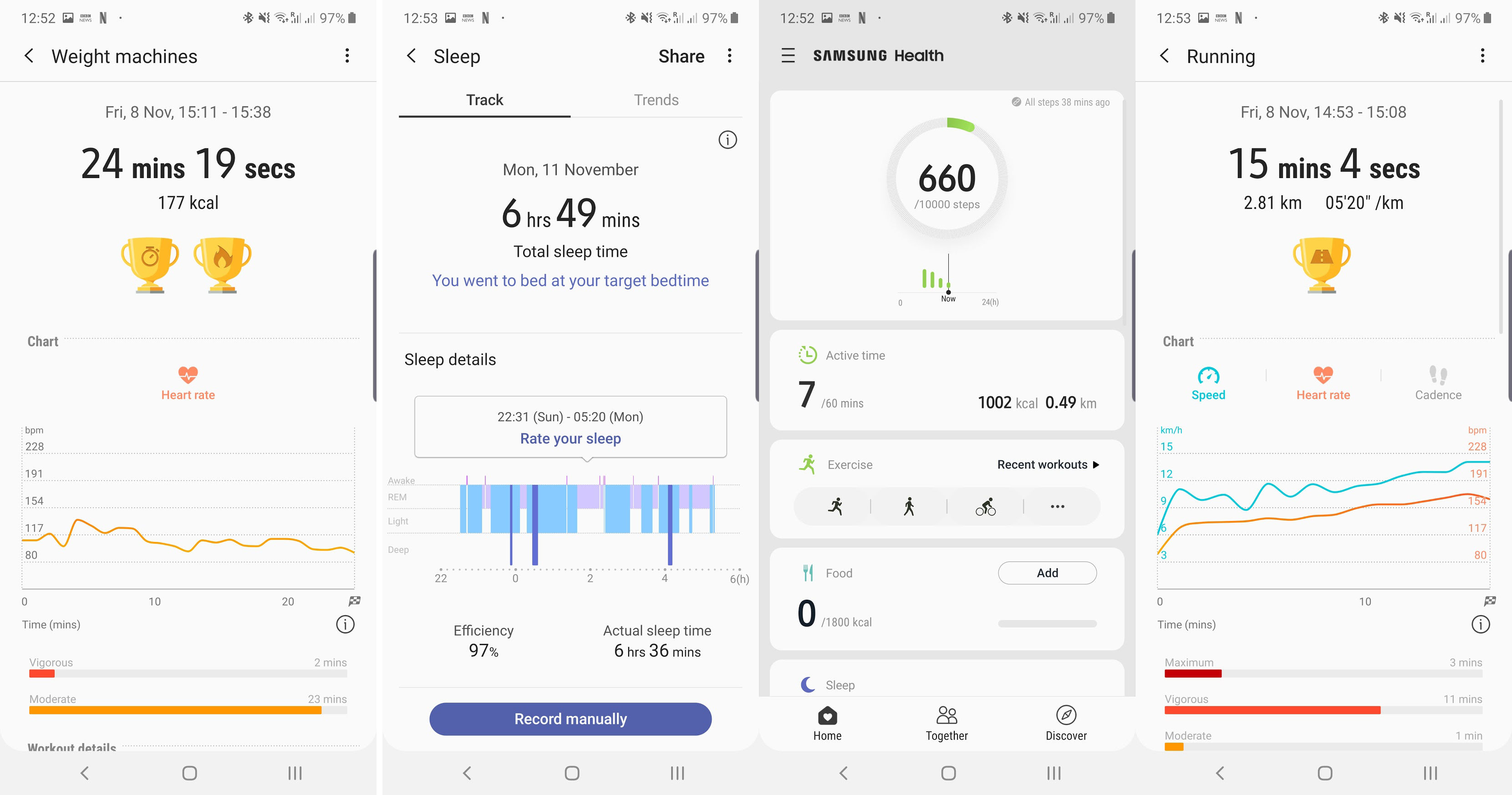 I really liked the automatic workout detection on the Active 2, which never failed to kick in on a brisk walk. It’s these small reminders that it is tracking you that hint at the fitness focus, but you can turn off the alerts and still have the watch do it all in the background. GPS run tracking was solid though sometimes the watch didn’t return my mapped route in Samsung Health which was annoying.

Samsung Health in general is a good companion app for surfacing your fitness data (it works with most Samsung wearables). Here you can view everything on a dashboard and dig into workout metrics.

The sleep tracking feature is a nice-to-have but like Fitbit it doesn’t offer much insight and is based on movement and heart rate. The Watch Active 2 is also a bit too bulky to wear comfortably at night, even if it is quite slim for a watch during the day.

Samsung included an ECG feature much like the Apple Watch Series 4 and 5 in the Watch Active 2 but at the time of writing it is not turned on. This is due to Samsung needing countries’ approval to use it, a process which seems to be DOA for now.

A more vital feature is the easily-two-day battery life. I found that even with the always-on display this wasn’t an issue. 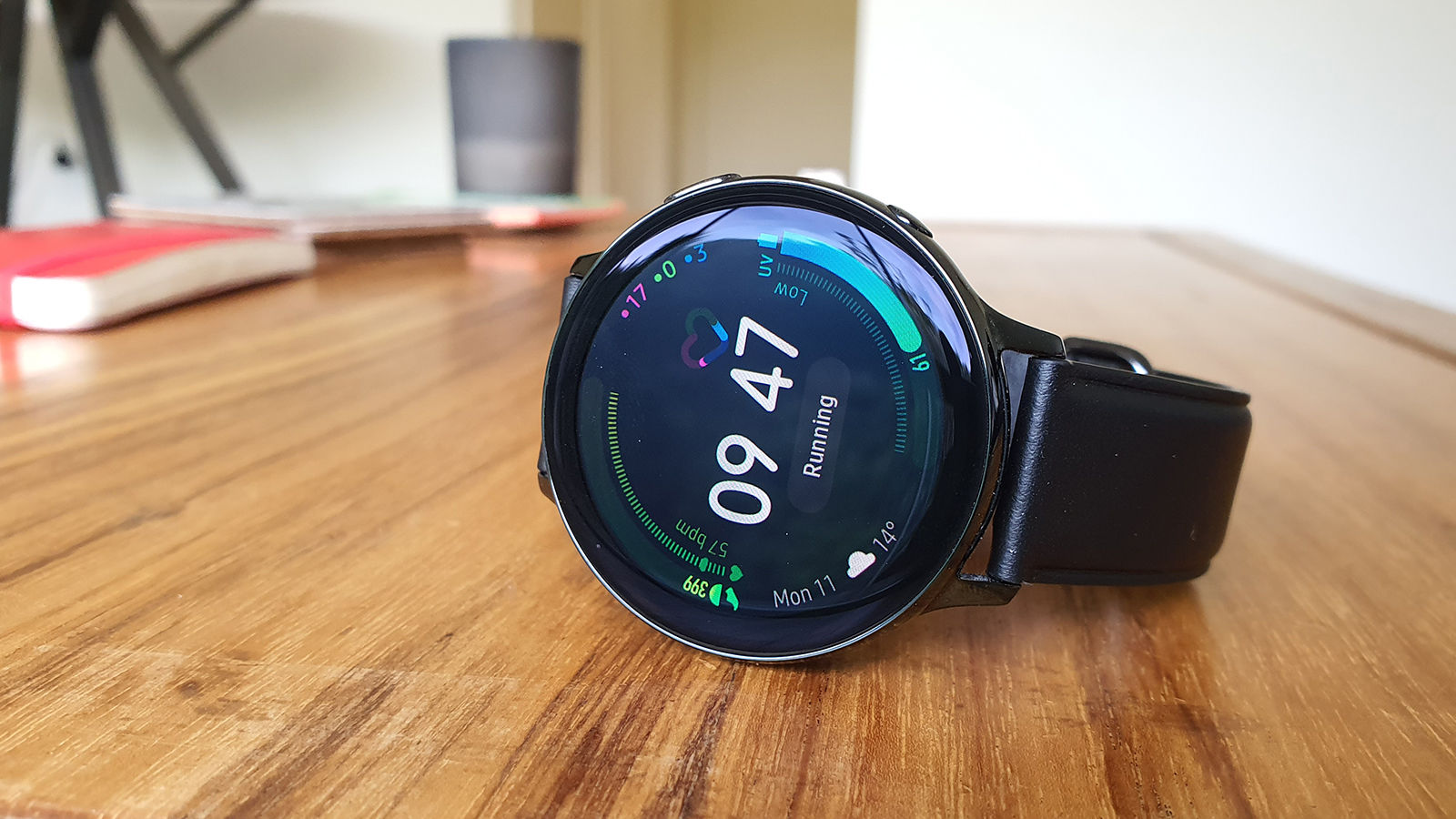 There isn’t much of an app ecosystem on Tizen, but that’s OK at this stage. On Apple Watch, where there is, apps can be fiddly and drain battery life. If you really need to do something like book an Uber, there’s your phone (for what it’s worth there is actually an Uber app on Tizen. It is bad).

A pre-installed Spotify app is useful to control your playlists, but you’ll need to bring your phone with you to listen to them even if you have the 4G model. There’s 4GB storage to download music files too if you want to hook the watch up to some wireless headphones, but it’s such a faff that I didn’t bother more than once.

That’s a feeling that it’s OK to have about smartwatches. Don’t over complicate things – you have your phone and some headphones, so the watch is there to track your runs, handle notifications, tell the time and sometimes be used as a remote control. It doesn’t need to do everything, that’s not what it’s for.

The Galaxy Watch Active 2 is the best smartwatch you can buy that isn’t an Apple Watch. It’s a better, simpler, more fun experience than any Wear OS product with good battery life, slick design and an enjoyable product to use.

It has fitness functions but shouldn’t just be viewed as a fitness tracker – the Active 2 is a fully-fledged smartwatch that does little wrong. It’s an all-round excellent wearable that shouldn’t be pigeonholed as a fitness watch.