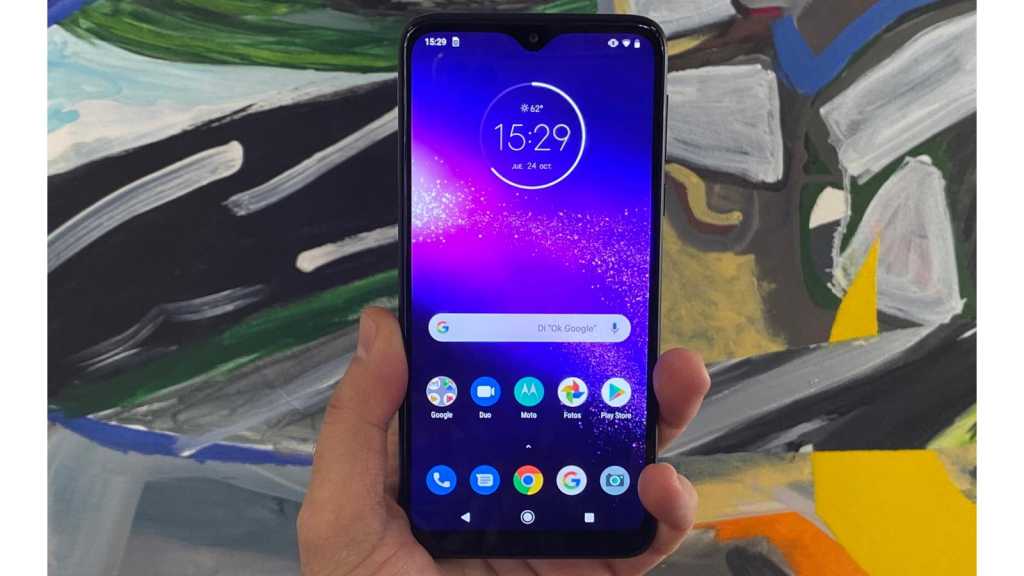 The Moto G8 Plus delivers in principal areas like imaging, performance and battery life. It also brings a premium-looking design, a clean user experience and some smart modifications on top the Android experience to the table. The 48MP main camera offers a greatly-improved photography experience, while the Action Cam, with its ultrawide angle lens, grants the phone some impressive cinematography skills too. Add to that a big battery with fast charging and decent mid-range performance, all for less than its predecessor and the G8 Plus is a tempting offering indeed. At least it would be if it weren’t for the aggressive competition from the likes of Realme, Xiaomi and beyond complicating matters.

The G-series is arguably one of Motorola’s most popular lines today, bringing competitively-priced mid-range performance with a touch of premium here and there.

Unlike previous years, where the entirety of the G-series has launched as a whole, Motorola has instead brought the arrival of the line’s most potent entry, the Moto G8 Plus, forward, alongside the global launch of the Motorola One Macro and the Moto E6 Play (the Moto G8 Play has also been release, but only in Latin America at the time of writing).

Why the company has done this is unclear, but all we want to know now is if this year’s Plus can live up to the prowess of its predecessors in an increasingly competitive mid-range space. There’s now a  Moto G8 Power you should consider.

At a glance, Motorola looks to have brought holistic improvements to this year’s G8 Plus, while managing to shave £30 off the asking price, compared to last year’s Moto G7 Plus.

The 4GB RAM/64GB SKU that you’ll find in most markets costs £239.99, with availability direct from Motorola, as well as third-parties like Amazon, right now.

This is a large-screened phone, making it great for enjoying media and photography – especially if you like to edit your snaps on-device – but only really suited to those with big pockets (literally, not fiscally). At 188 grams, the G8 Plus is also one of the heavier handsets from the 2019 crop.

Defined by the 19:9 aspect ratio display, this is a fairly tall and narrow device, something to consider when using it one-handed, however, it’s a little more manageable than the likes of the even more pronounced 21:9 footprint of the company’s own Motorola One Vision which launched earlier this year.

We tested the Cosmic Blue model, which adopts a darker overall appearance, compared to the Crystal Pink alternative. As such, even though the phone wins style points for the tasteful gradient running down its plastic back, the shiny finish does also hold onto fingerprints all too easily. The included transparent silicon case does go some way to alleviate this issue though.

The back of the phone also houses what, at first glance, looks like a quad-camera array, akin to the likes of the Realme X2 Pro. However, it’s actually a more conservative triple-sensor setup, set high in the top left, leaving space for a centrally-positioned rear fingerprint sensor (rather than Motorola opting for a pricier in-screen alternative).

In practice, this older sensor tech actually proves more responsive and more reliable, compared to newer alternate unlock methods – like the in-screen offering found in Motorola’s own One Zoom – which proved to be consistently sluggish and unreliable by comparison.

We would have liked LED notification integration into the sensor, as we’ve seen on other phones – but such a trait is absent on the G8 Plus.

One feature that does appear on the phone’s front is a 25MP camera sensor. It resides within a more severe U-shaped notch, rather than a softer-lined dewdrop notch, as popularised by phones like the OnePlus 6T.

As for the bezels around the edges of that 6.3in Max Vision display, the sides are slimmer than more premium devices such as the iPhone 11, while there’s a pretty noticeable chin, which undermines its otherwise appealing aesthetics. Overall, Motorola has managed to skew screen-to-body ratio in favour of the display, at 82.5% – not as high as some, but wholly respectable for a mid-ranger such as this.

You’ll also find speakers above and below (firing forward and down respectively) offering stereo sound and boasting Dolby tuning.

Rounding out the G8 Plus’ form is a well-placed power key with a knurled outer face, a somewhat awkward volume rocker, positioned high up on the phone’s right side and, thankfully, a standard 3.5mm headphone jack set into the phone’s top edge.

While we weren’t expecting miracles, Motorola seems to have taken full advantage of this Snapdragon 665 octa-core chipset at the G8 Plus’ heart, especially considering it’s been paired with 4GB of RAM.

In both the single-core and multi-core Geekbench tests, the phone scores similarly to that of the Xiaomi Mi A3, which is a good sign considering the price point here.

The 64GB of internal storage seems a little tight, considering select similarly-priced alternatives can be had for more, but microSD expandability up to a further 512GB should give those that do need extra space the wiggle room they desire.

As for the battery, Motorola given this humble mid-ranger a generously-sized 4000mAh power pack that doled out just over 9 hours in our battery testing – a touch behind the A3, which lastest just shy of 11 hours despite also sharing in a 4000mAh cell.

Fortunately, Motorola’s Turbo Power-branded fast charging tech is on hand and while the phone is only quoted as supporting up to 15W speeds, the company throws an 18W TurboPower adapter in-box, letting you refill the phone up to 50% in approximately 42 minutes, while a full charge takes a rather lengthy 2.5 hours.

Although the G8 Plus opts for an IPS LCD panel over AMOLED screen technology, it still doles out a decently-rich viewing experience, with accurate colours, despite its more affordable nature.

One thing to note is that display brightness tops out at around 400nits, meaning you’ll likely find yourself cranking the screen up to near its maximum when enjoying media, like photos, streaming video or when gaming, if you want to get the most out of the visuals.

Despite this, in every other regard, Motorola seems to have employed a decent screen on the G8 Plus; with nice wide viewing angles, the ability to tweak and tune on-screen imagery to your tastes and solid response times when gaming.

The G8 Plus’ many-sensored camera setup is fronted by a large 48MP module – the same found on the Motorola One Vision – which uses pixel binning to aggregate the image data of every four pixels into one – giving you a 12MP image that benefits from reduced camera shake, reduced noise, better colour and contrast accuracy, and improved low light performance.

The other standout aspect of the phone’s imaging chops has to be its ‘Action Cam’ – an ultrawide-angle 16MP sensor with an f/2.2 aperture and a 117° field of view.

In addition, Motorola has included a depth sensor and autofocus setup and an LED flash that collectively trick your eye into thinking the G8 Plus has more cameras that in actually does, but they included is nonetheless appreciated.

If you strip away the branding used here and simply look at the hardware at play, it’s as if Motorola melded the main camera of the One Zoom with the wide-angle offering of the One Action to give the G8 Plus greater versatility and, for the most part, this blend of tech pays off.

Generally speaking, photo samples offer pleasing vibrancy, accurate white balance and colours that are seemingly more accurate than what most phones at this G8 Plus’ price point would likely produce.

The G8 Plus also allows you to set live filters, in addition to accessing specific modes such as Night Vision. From a usability standpoint, everything seems to be within reach but there’s definitely a discernable delay when jumping between modes and when starting the camera up for the first time.

Although the phone does occasionally demonstrate promising dynamic range capture, when shooting in low light, don’t expect much from the G8’s sensor setup if there isn’t much ambient lighting on-hand. Face seem especially challenging for the phone, when the lights are down, so expect to find yourself reshooting to get the right shot in such scenarios.

Flip around to the single front sensor and there are some surprise inclusions, like (digital) zoom as well as the ability to choose between full sensor-sized 25MP stills or pixel-binned 6MP images, using the same Quad Pixel branding as on the main 48MP sensor.

As for video recording, although Motorola already debuted this feature in the One Zoom, the ability to shoot Full HD video in landscape, while still holding the phone in portrait also makes an appearance here too; the idea being that you benefit from greater one-handed stability when shooting in this mode. If you wish, you can also quickly switch to a standard landscape shooting experience too, if you want to better see what you’re capturing.

The main camera can record at up to 4K resolution at 30fps and Full HD at up to 120fps, while the wide-angle camera and the selfie camera top out at 1080p. Stabilisation is also astounding for a phone of this standing, ensuring movement in footage is cleanly smoothed out without too much effort on the user’s part.

Based on its launch window, we had hoped that the G8 Plus would arrive running the latest Android 10, but that simply isn’t the case, with a near clean take on Android 9 underpinning the phone’s user experience instead.

Motorola has made some select customisations that take the form of ‘Moto Actions’ which cover everything from automation to gesture shortcuts.

These are generally great, with the double-twist to quick launch the camera and the karate chop action to toggle the flashlight on and off being particular highlights.

Unlike Android 9 on Google’s own Pixel phones, which introduced new methods of navigation, Motorola has opted for its own button and gesture setup. It works well and the learning curve isn’t too steep but if you’re familiar with any other edge-swipe-driven UX, things do take a little getting used to.

In general, the Moto G8 Plus delivers what we expected of it, improving on key elements of the G7 Plus in obvious areas like photography, performance and battery life.

We’re also fans of the phone’s aesthetics and design details, even if it’s likely to fall on the larger, heavier side for most people and the bezels, especially that chin, are a little too thick for our tastes.

As for performance, it’s more than equipped for everyday usage and can happily wade through more demanding games, so long as you don’t want the slickest visuals available. Longevity, too is also on-point, with a pleasing power score in our tests that suggest it’ll happily last through a day’s heavy use, without breaking a sweat.

Where the G8 Plus struggles is with its standing against like-minded competitors, such as the Realme 5 Pro, Xiaomi’s Mi A3 and even the likes of the Honor 20 Lite; many of which deliver more bang for your buck.

It’s ultimately a case of whether you’d rather place your faith in Motorola as the more established brand with the cleaner user experience, or you’d rather make your money go further elsewhere.

Note: This story was originally published in Spanish on our sister site,  PC World Spain.