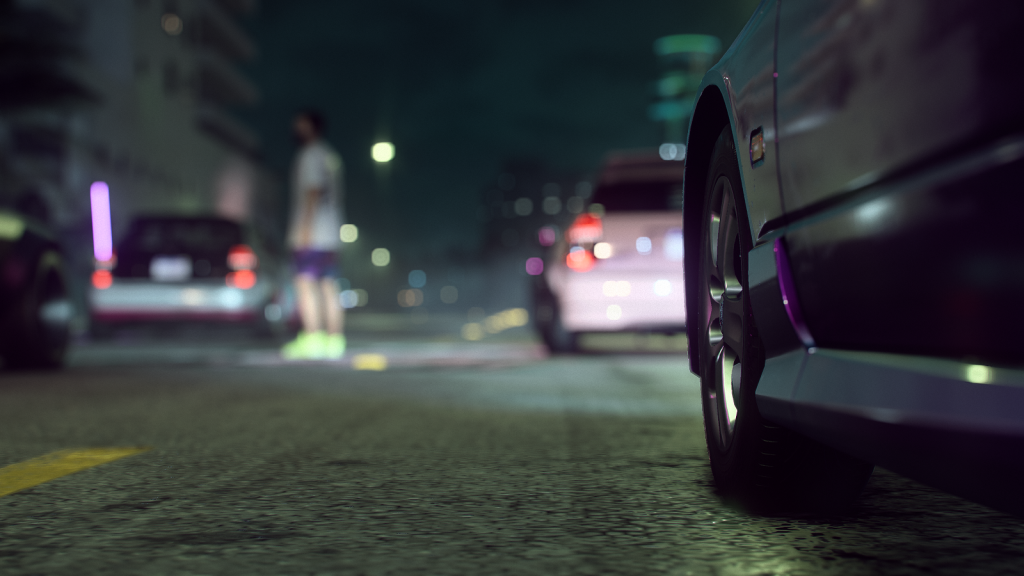 Need for Speed Heat is a mixed bag. It’s hard not to be dragged into Heat’s world of neon-soaked street races, fast cars and a pulsing soundtrack.  Look closer, and NFS has a forgettable story, a clumsy drift mechanic and cars that handle like shopping carts. If you’ve got nothing else on, this will amuse you, but I’d probably recommend something like Burnout Paradise’s remaster to those after a more arcade feel, while Forza Horizon 4 has more to offer the serious racer, even if the Scottish countryside isn’t as exciting as not-Miami. However, this straddles the lines between the two adequately, and if you’re looking for a new racer, this isn’t offensive, it’s just bland.

Something is wrong in Palm City. Ambulance drivers hidden behind opaque windows ram their injury-chariots through crash barriers, and my street-racing frenemy Dex giggles “just a shunt” as he hits me at 110 miles an hour, flipping my car, driving off into the sunset to crow “there’s nothing better than an open road in front of you, huh?”

You could blame this on some slightly dodgy AI programming in EA’s latest street race-’em-up, Need for Speed Heat, but I prefer to think that the denizens of Palm City have become homicidally infatuated with street racing.

That makes the story a little more believable, anyway. Need for Speed Heat presents the city of not-Miami, filled to the brim with street racers. So many in fact that the car parts shops will only sell car parts to really cool racers, meaning it’s not just about whether you have the cash, but also the rep, to get the latest parts fitted to your custom motor.

As with many parts of the game, you have to buy into the conceit to get the best out of the game. Sure, the specialist autoparts company won’t sell their parts to just about anyone. That doesn’t make sense in the real world, but in the street-racing capital of Palm City, of course they’ll only sell to the best of the best. 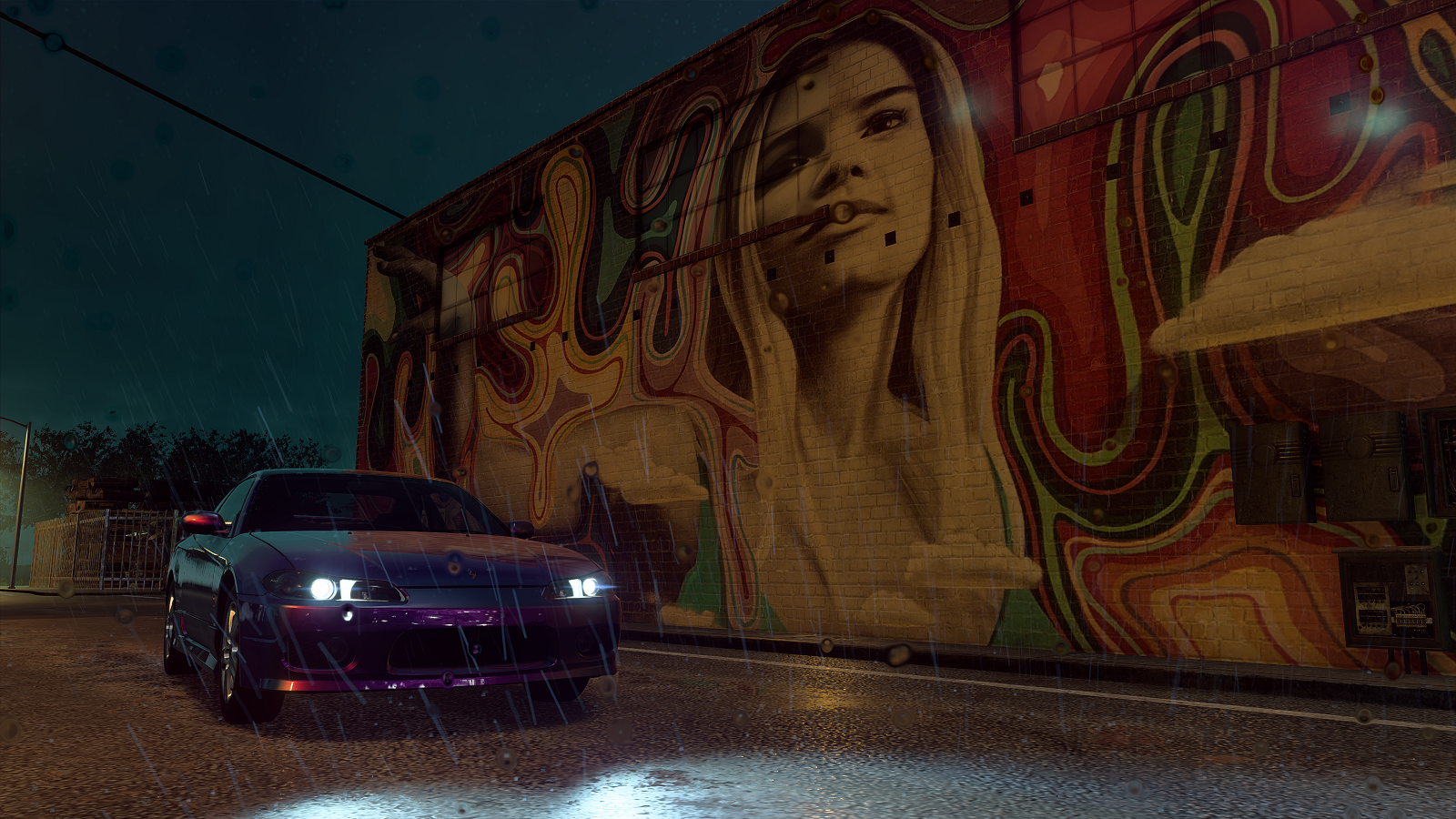 This means in addition to accumulating cash – annoyingly referred to constantly as ‘Bank’ – you’ll also need to make a name for yourself by earning ‘Rep’. You earn these in different ways, but generally you’ll be looking to make Bank by competing in official events during the day, and taking to the neon-lit streets at night to win illegal street races for Rep.

This duality is Need For Speed Heat’s boldest choice, and better yet it cans the boring 24 hour day and night cycle, which eased into racing games solely because it was realistic. Here, day and night are separate worlds for you to drop into, and each have their own distinct vibe.

By day Palm City is sunlit streets, clearly marked courses and empty roads that are perfect for drifting around. It’s a perfect time to drive about and take in the sights, whether you’re identifying gas stations to repair your battered ride or looking for billboards you can smash.

These last two mechanics are lifted directly from fellow EA title Burnout Paradise, one of the best action-racers ever made, and their inclusion here just makes sense. Paradise’s influence has been felt in the entire genre since it was made, and former developers Criterion even worked on the Need For Speed franchise for a while, but seeing more of its ideas absorbed into racing games is great to see. 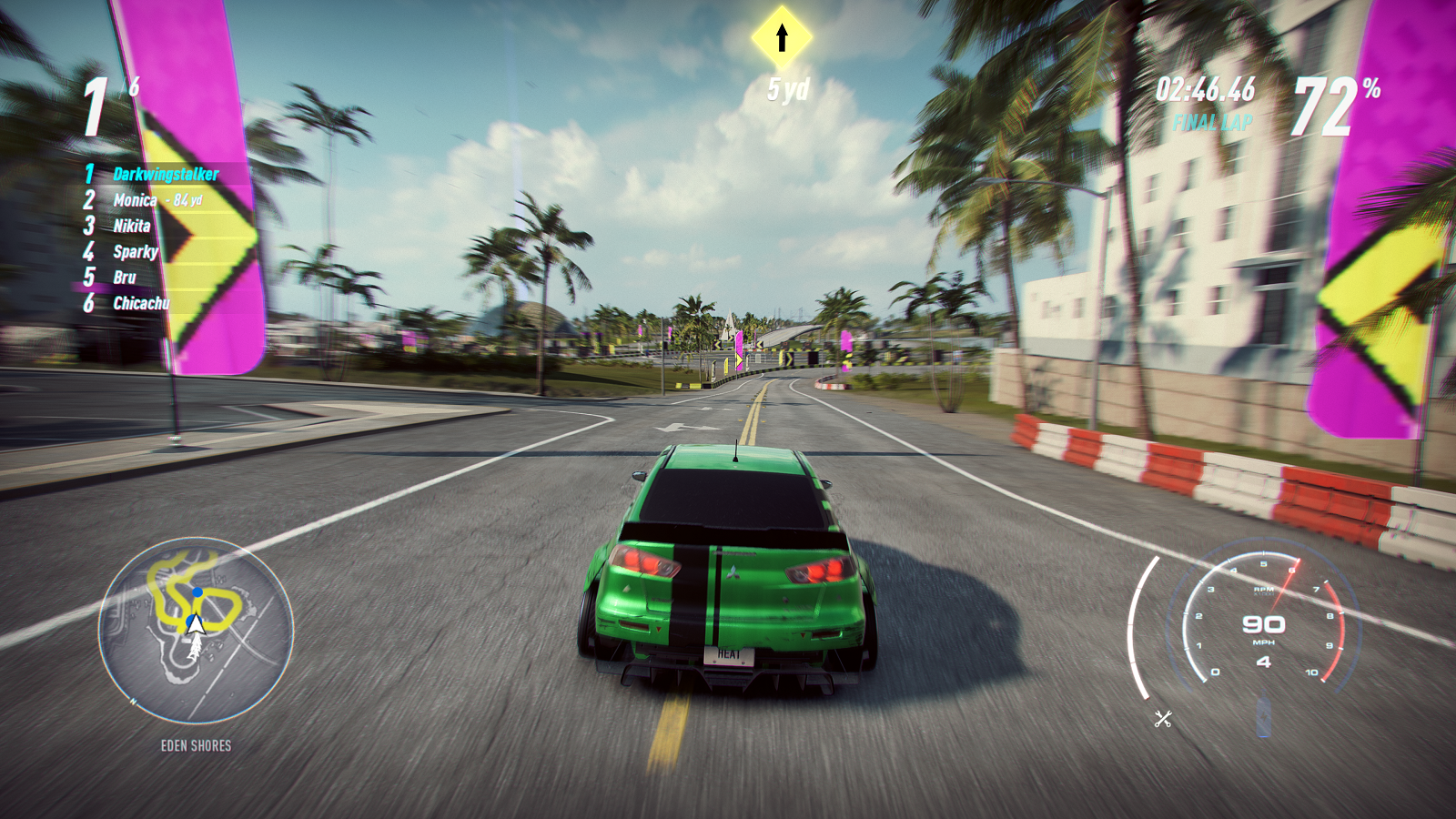 You’ll drop into daytime racing to make cash, take care of your shopping or explore the town, but there are plenty of reasons you’ll want to race at night.

By night, the tracks are marked with neon arches in lighting instead of hard barriers, and the traffic is out to play, crowding the once-wide streets of Palm City. This makes racing feel more claustrophobic as you trade paint with your rivals as you fight for first place.

Illegal street racing is, well, it’s a crime – even here. If the cops see you bombing about the streets at night they’ll start chasing you, and that can be when you’re cruising the streets late at night or mid-race, meaning you could find your race ruined by the invention of a fleet of cop cars, which adds some danger to the proceedings.

Aesthetically, Palm City by night is beautiful, with a neon haze coating the streets as puddles on the road refract your headlights and add to the atmosphere. It’s a nod back to the series heyday with Need For Speed Underground, although it’s not quite as fun. 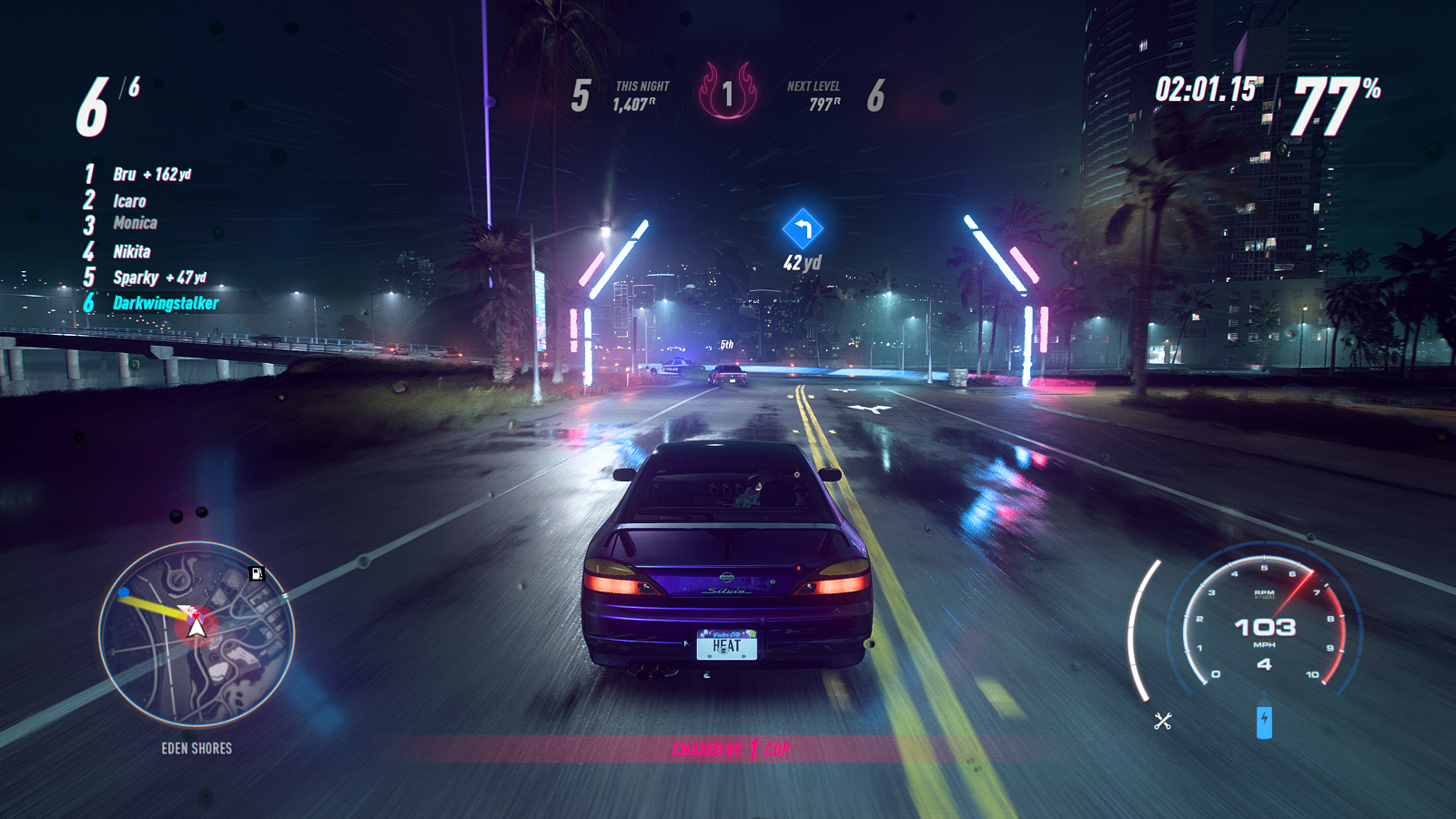 Switching between these two is easy and can be done from the map, but I wanted to mention it because of the brilliant transition between day and night. Hit the button and the map closes in time for the world to flip upside down, spinning your car upside down while the new map loads, before it spins you back into your new reality.

The game’s drifting mechanic is the biggest misstep. In total opposite to the way drifting is supposed to work and has worked in most previous games, here you drift with a brief pump of the accelerator, pulling the right trigger quickly ahead of a corner to send your car careening around hairpin bends and wide corners.

This just… it doesn’t work. You can change this in the in-game customisation option to make it work by pumping the brake instead, but it’s still a slightly awkward system and the physics don’t quite work. You can get used to it, but it was jarring for most of my first few hours with the game and regularly saw me smashing into objects instead. 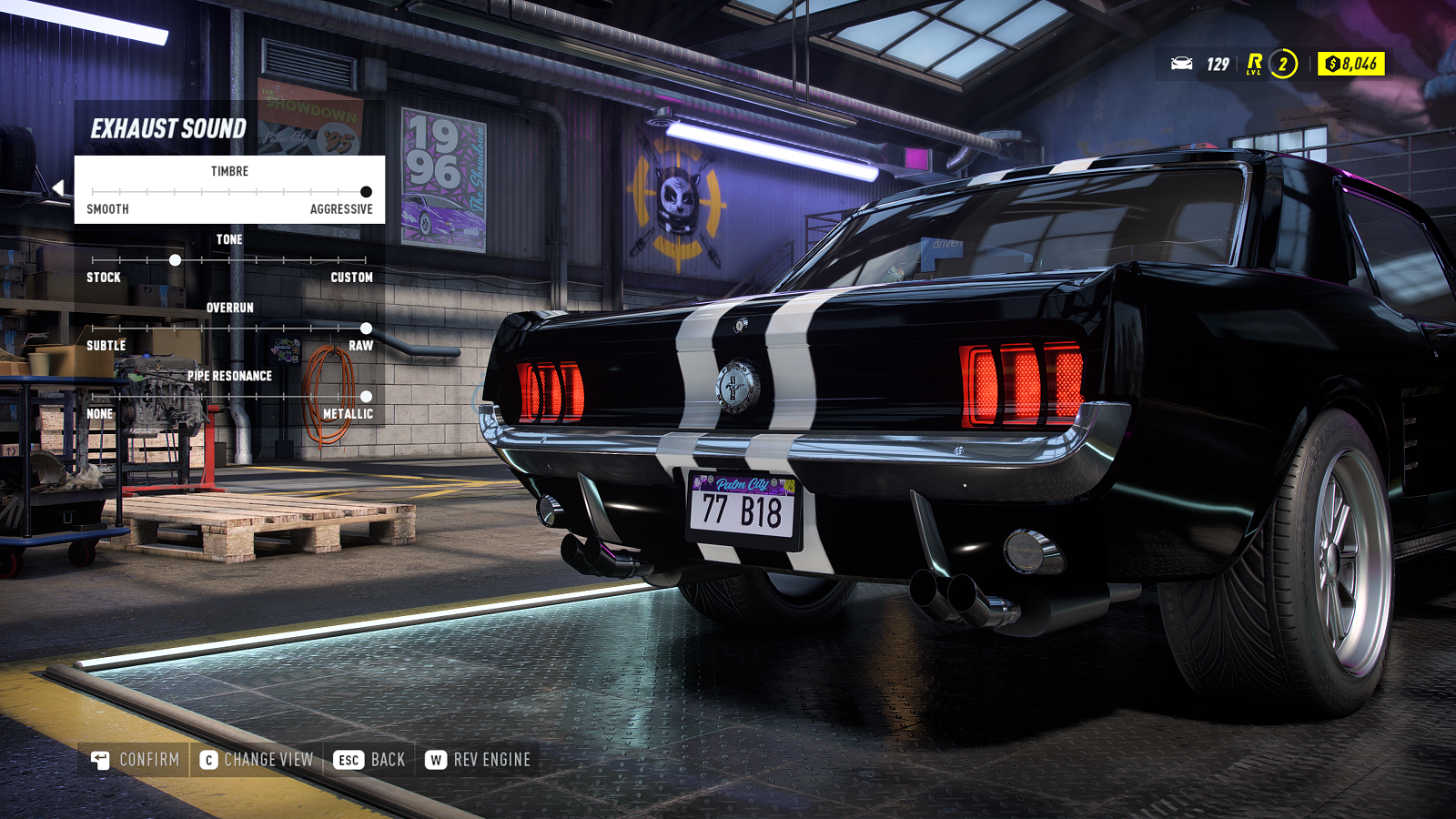 Elsewhere when it comes to customisation, there’s a lot you can do with your cars, but the price for cosmetic upgrades is pretty steep, so I found I was skipping it in favour of slapping on one of the wraps created by other players in the game and sticking to motorsports.

However, the cosmetics are fun, and I was able to paint a great deal of cars in a shimmery purple colour, which is all I’m looking for in the game and, indeed, in life.

I’m entirely sold on the aesthetic and mechanical choices that Need For Speed Heat makes, but it’s hard to pinpoint why the game doesn’t come together: there’s something decidedly wonky about the way that the cars handle that turned me off.

Most of the trackside debris will do little more than slow you down, meaning you can career through walls, signage and even trees with little more fanfare than dropping a couple of miles an hour off the speedometer.

All of the small complaints that I have with the game add up to the fact that you don’t seem to have much of an impact on this street-racing obsessed society: the AI partners you occasionally ride with won’t even react if you crash into the side of their car on the way to a mission.

When your only real interaction with the world around you, and what you’re doing with your car doesn’t really seem to matter, it’s easy to start to feel like nothing you do matters, and suddenly, as soon as it arrives, Need for Speed Heat’s magic dissipates.