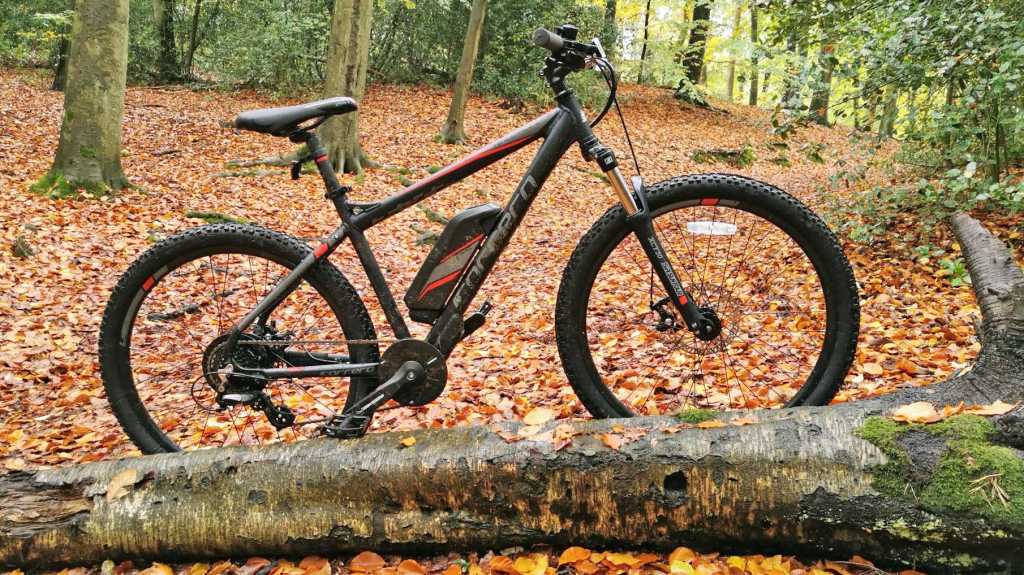 The Vengeance E is a great electric mountain bike for the price. It’s not the best you can buy, but it will help you tear along those trails, and you can often find it discounted.

Carrera is Halfords’ own brand of bike and the Vengeance has been around for years. It has existed in electric form for a couple of years now, and this is the latest 2019 model.

The Vengeance E takes the non-electrified bike as a base and adds the Suntour HESC system – with torque sensing – to appeal to those who still want to have fun while offroading but want a bit of help up the hills.

It’s best on open forest trails rather than steep, technical single-track but practically wherever you ride it, it’s great fun.

The regular Vengeance is a bargain at £330, but even at £899 the Vengeance E is decent value for an electric mountain bike. If you want something with top-notch specifications (and a better motor) you’ll have to spend at least twice as much.

If you’re keen to find alternatives, check out our roundup of the best electric bikes.

With the same geometry as the standard Vengeance, the E Spec is a very similar hard-tail mountain bike to ride. It has Tektro mechanical disc brakes, 27.5in wheels with 2.1in Kenda tyres and 8-speed Shimano Altus gears. 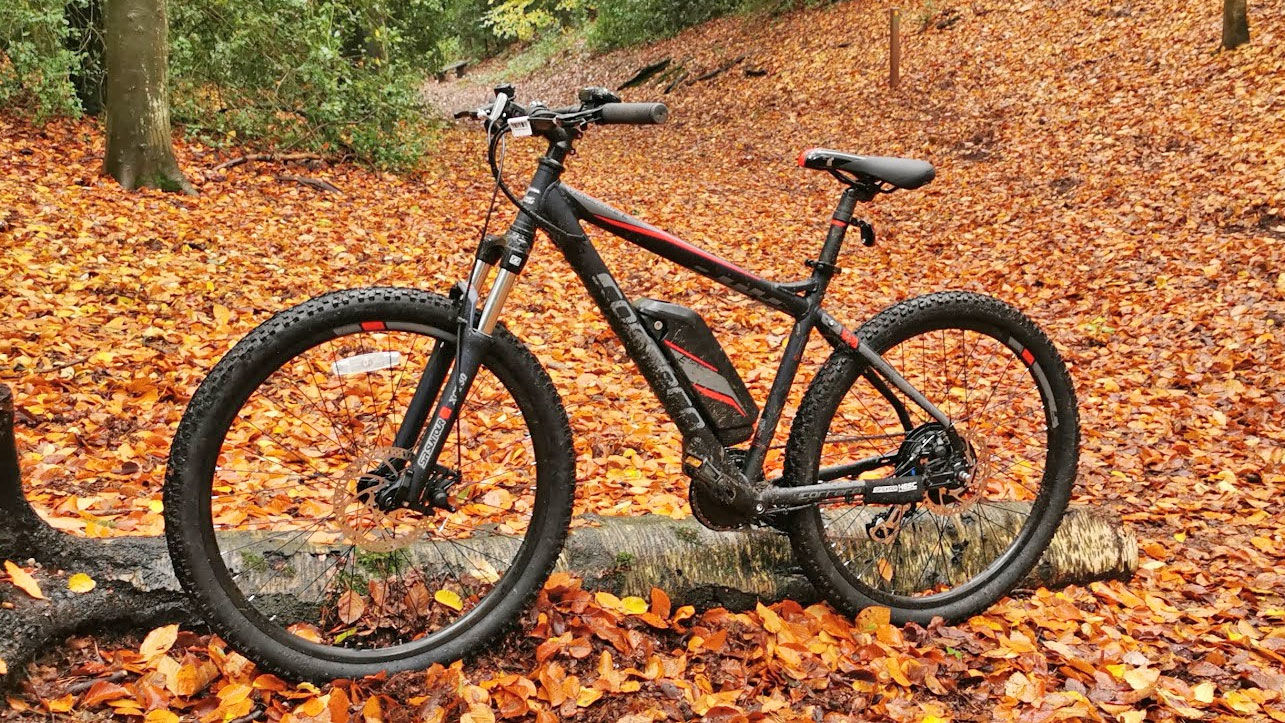 The chainset is a Suntour EBCW18 with 38 teeth, and the rear cassette a Shimano CS-HG200-8 with 12-32 teeth. What this means is that you have around a third of the gears of a traditional mountain bike: there’s just one chain ring at the front. 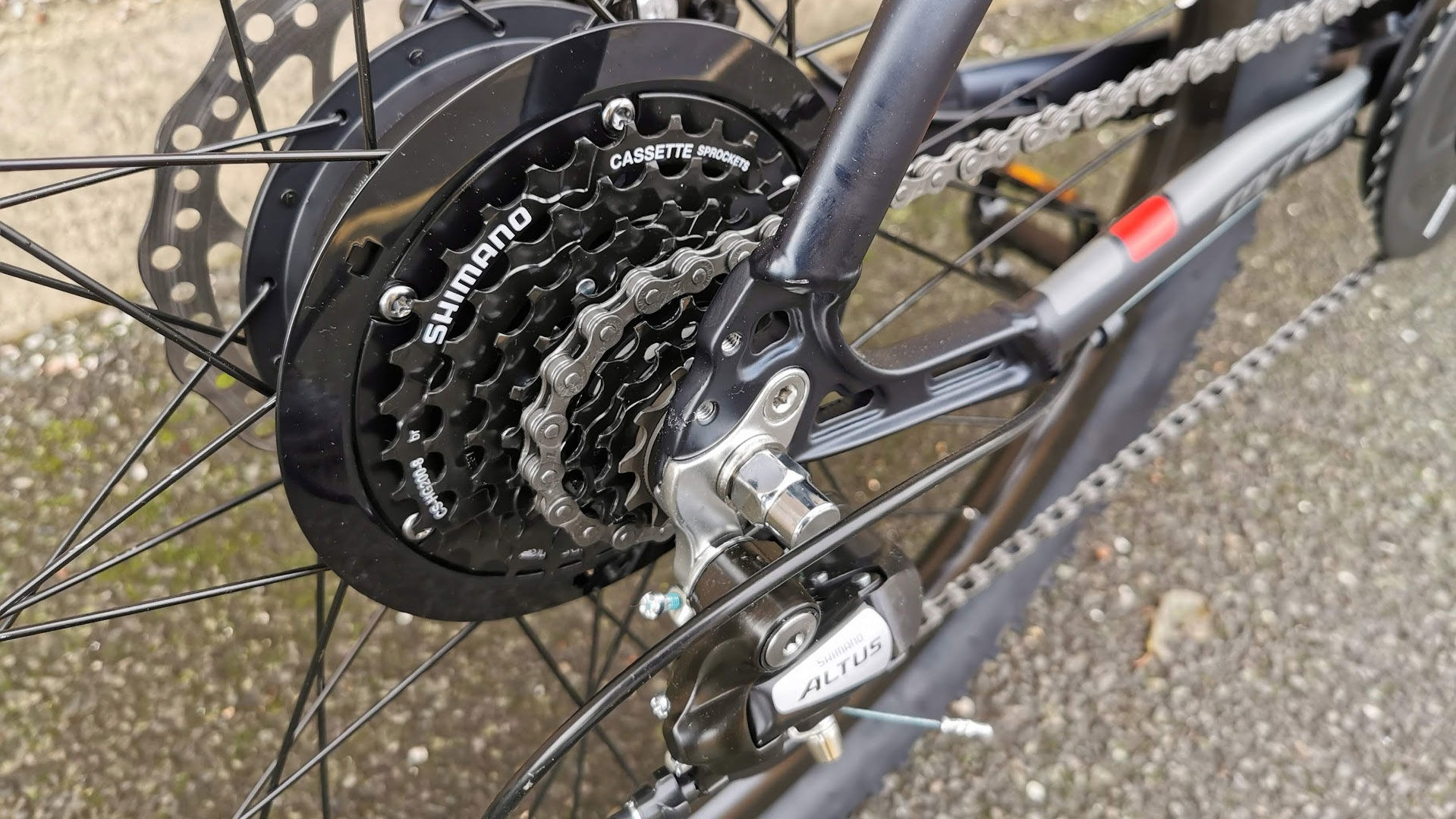 Instead, the Suntour 250W motor built into the rear hub takes the strain, offering up to 60NM of torque. Unlike most hub-based systems, the Suntour HESC uses torque sensing. This means it delivers power based on how hard you’re pedalling, not simply whether you’re pedalling at all. 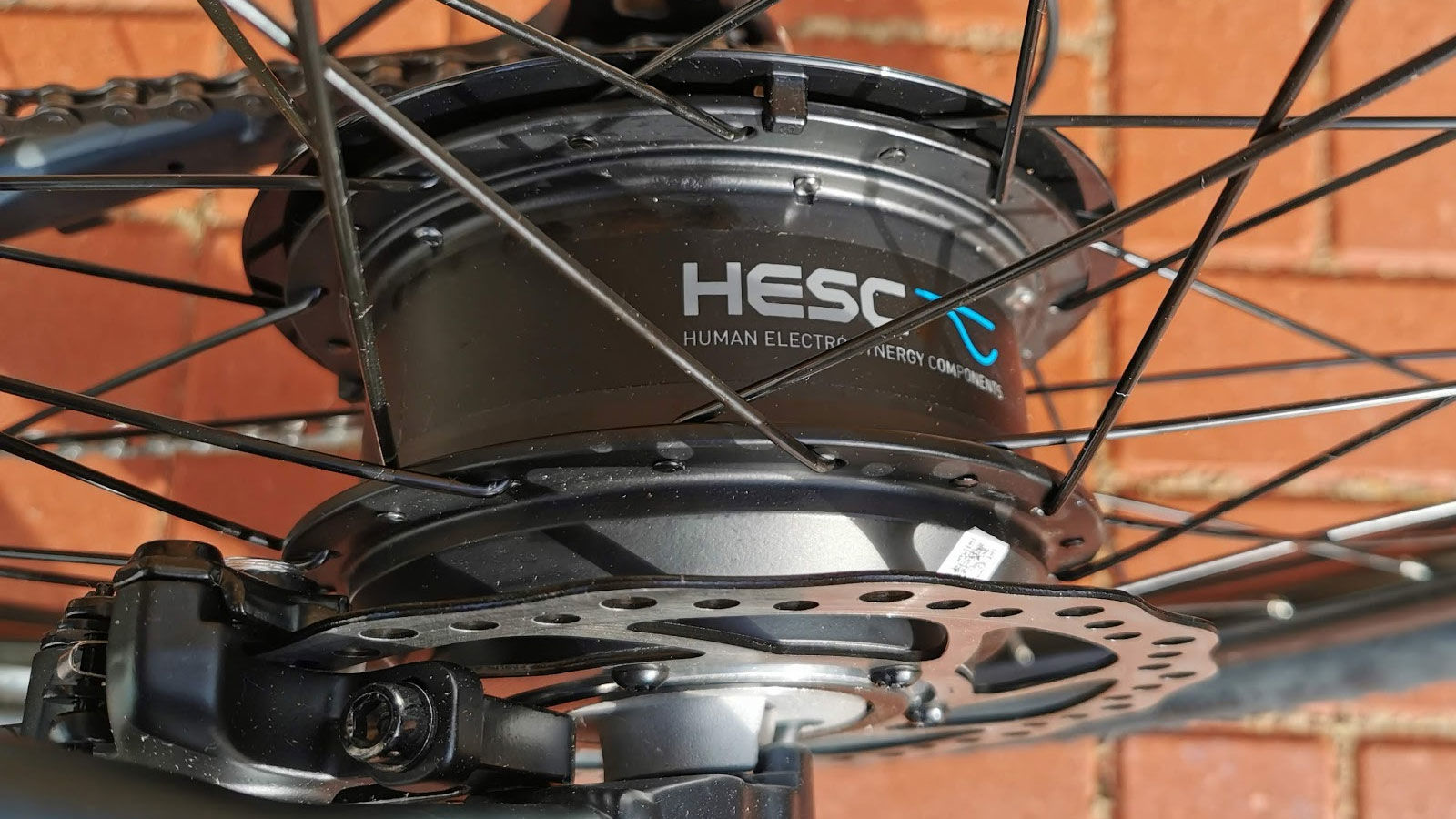 It’s a shame it’s paired with a basic (and ugly) control panel rather than an LCD display. It serves to make it look like you’ve picked the cheapest electric bike you could find.

The arrows change which of the three power modes you want, and the Light button simply makes the LEDs brighter or dimmer. Your speed is shown to the nearest mile per hour, but there are no other functions such as trip distance, which is where LCD displays are better. 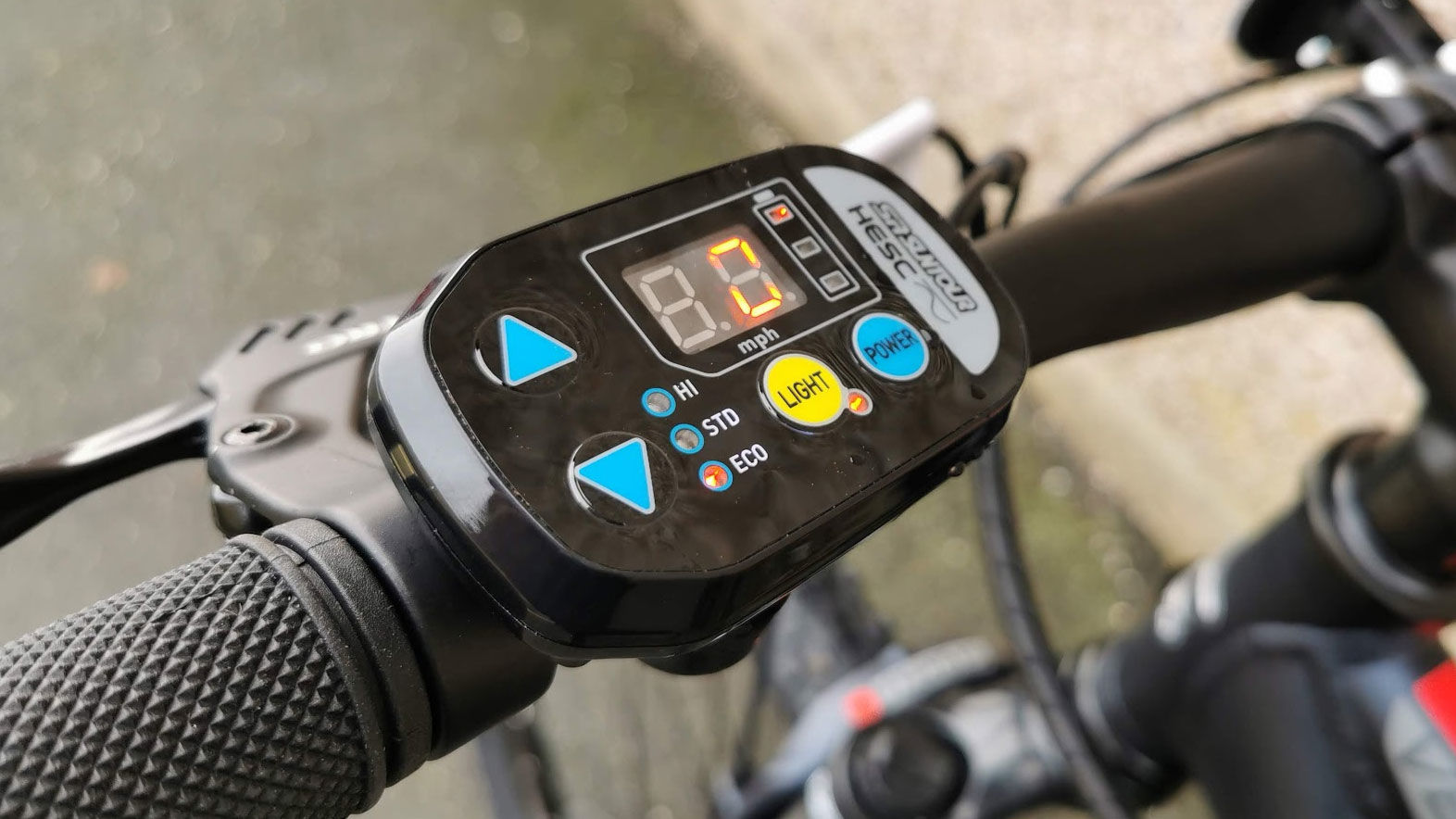 It’s worth noting that there’s no walk mode, and the almost 23.3kg weight can become rather tiresome if you do find yourself pushing the Vengeance E up a steep hill.

Also, if you want to save battery power, you have to press the power button to turn off the electrics.

The large battery has a 313Wh capacity – a little on the small side – but is good for up to 40 miles. As ever, actual range will depend upon the temperature, which mode you use and how many hills there are to get up. 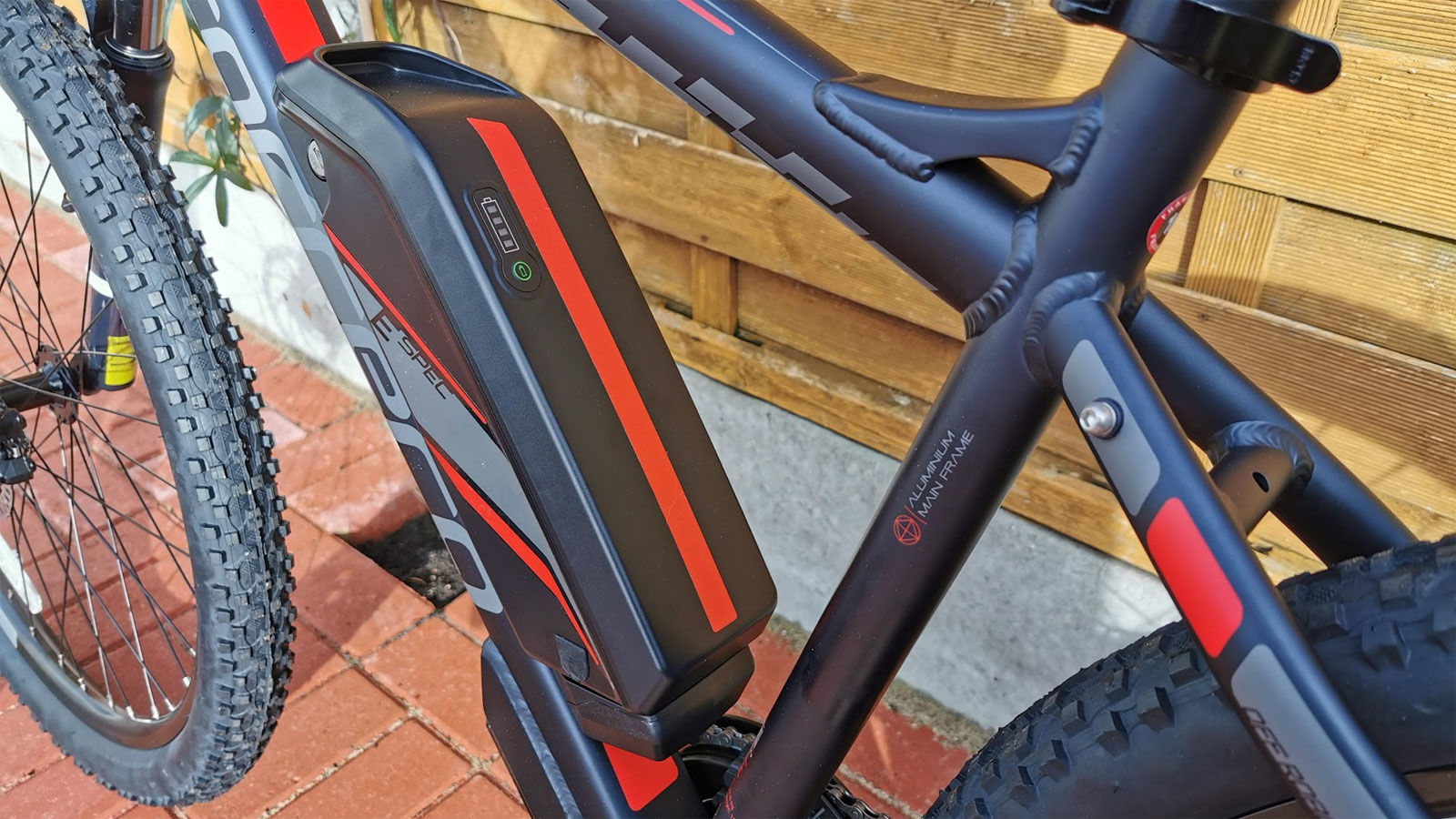 Using the supplied keys, you can remove the battery from the bike and charge it indoors where it will take around five to six hours if it’s completely discharged. The three-pin connector has to be screwed into place which is quite fiddly, but at least this prevents it from being pulled out accidentally.

The rear wheel is secured by nuts rather than a quick-release bar, so be sure to take a spanner with you in case of a puncture. Fortunately, you can disconnect the motor’s wire (the connector is protected by the stretchy fabric in the photo below) so the wheel can be removed, but you will need to carry spare cable ties and some side cutters as the cable is held in place on the frame in various places. 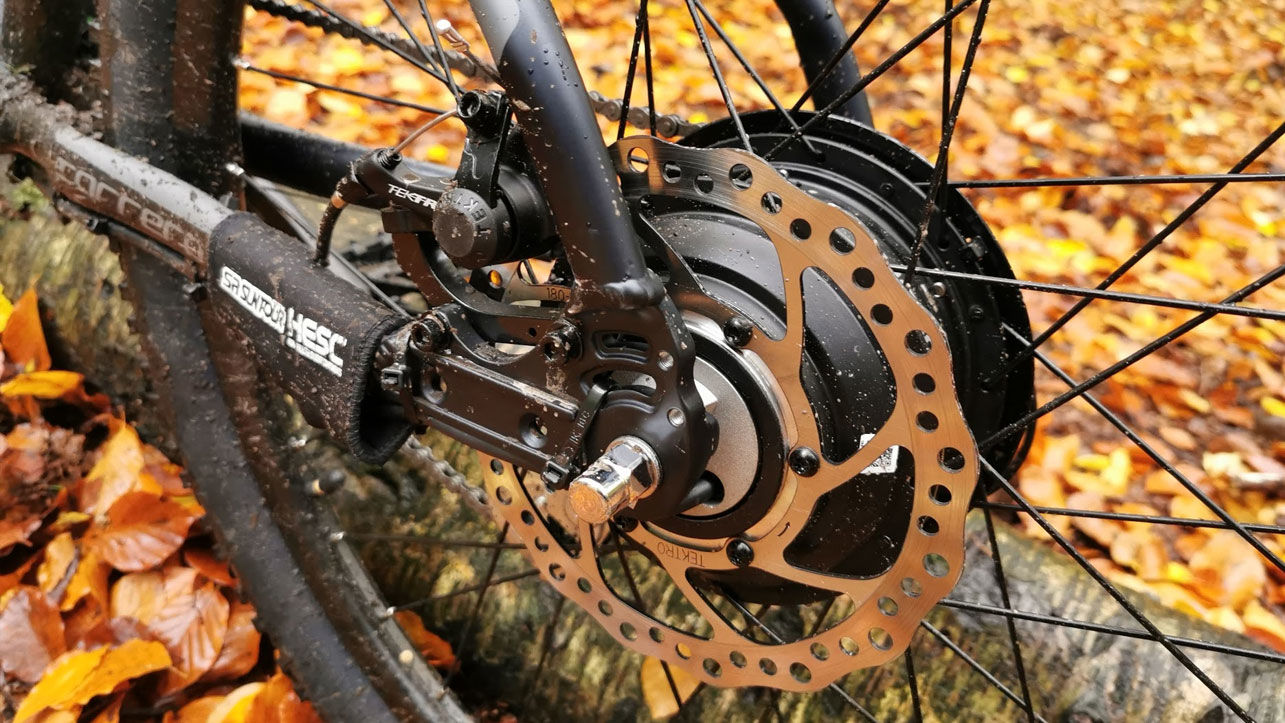 I’ve owned a Vengeance for a number of years, so I was keen to see if the electric version would improve the ride quality or make it worse.

Like all electric bikes, the extra weight is noticeable, but it gives more stability and therefore confidence on downhill sections. Plus, the large knobbly tyres offer plenty of grip.

On road, the Suntour motor wasn’t amazing. Its power delivery was surprisingly jerky for a torque-sensing system and it occasionally kicked in when freewheeling, which was a surprise.

Also, cycling up steep hills required more effort than expected which meant progress was also slower than expected: around 10mph. On the flat, however, there’s enough torque to get up to the 15.5mph limit and you’ll likely only go faster when going downhill.

The good news is that the freewheel really does behave like one and there’s no resistance as you get with some electric bikes, so it’s certainly possible to ride the Vengeance E once the battery has run out. Obviously it is harder work with the extra weight and fewer gears, but it’s not a disaster.

Get the bike off road and it comes alive. My test route involved a good long section of the Green Chain walk in SE London, with some wide, flat sections and some narrower climbs and descents.

Here, the Suntour system seemed in its element delivering useful power to speed along the trail, even on shallow inclines. Although there is a difference in the amount of power available in each of the three modes, it’s when you get to about 9mph that the power drops off gradually for Eco and Normal modes. It remains constant in High right up to 15.5mph, but even so, you’ll still feel plenty assistance even in Eco for starting off. 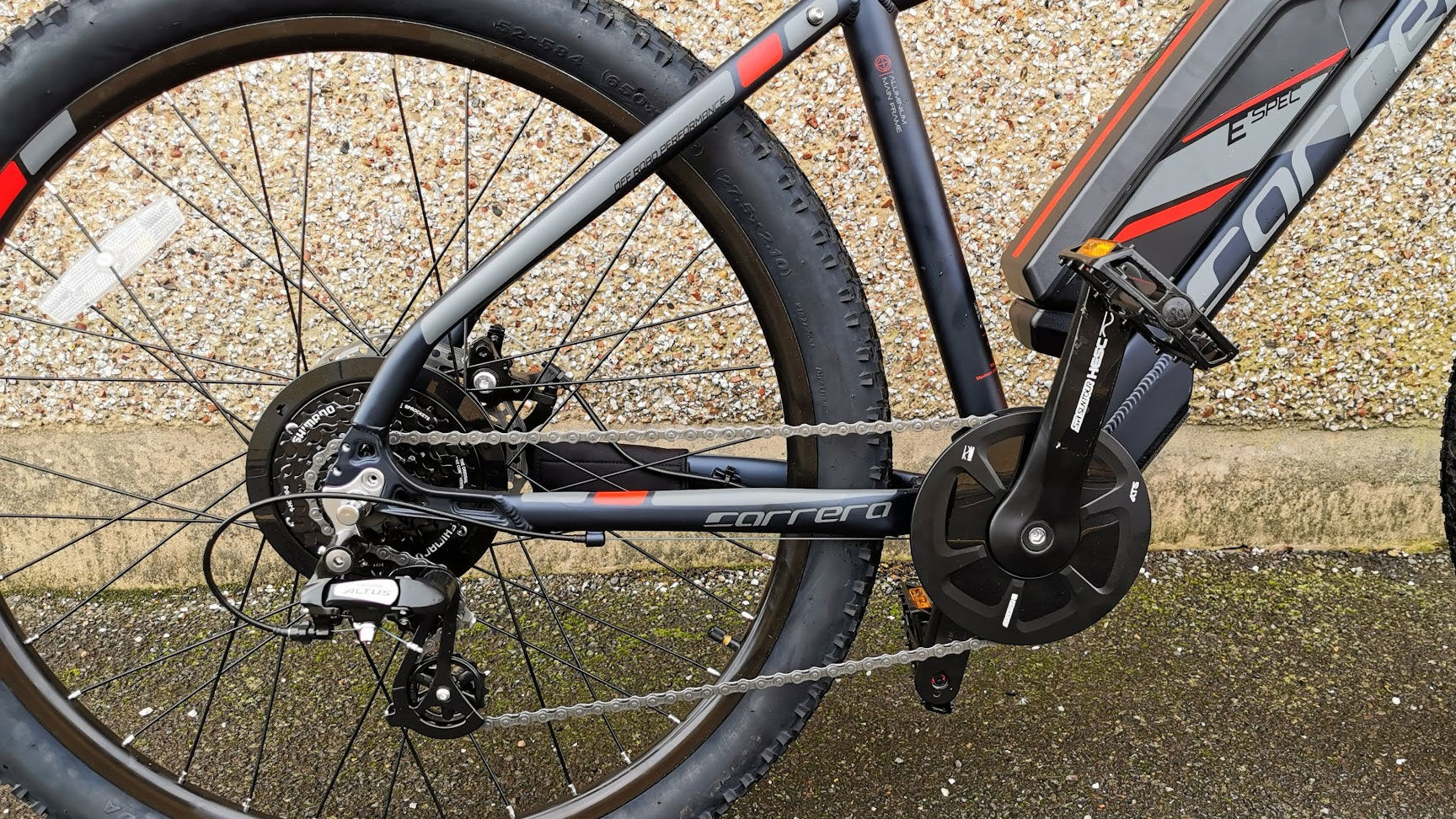 When it comes to steep sections, the motor becomes loud – almost growly – and certainly seemed to lack outright torque compared to more expensive rivals. But this is par for the course: you can’t expect a near-silent, high-torque motor at this price.

Where the lack of a walk mode is a problem is on those steepest sections. If you come to a stop, it’s very difficult to get restarted, even in the lowest gear, so it’s a case of pushing until you get to a place where you can pedal off more easily. And if that’s even a quarter of a mile, you’ll notice those extra 10kg or so over the regular Vengeance.

Similarly, if you have to lift it up any flights of steps, or onto a bike carrier on the back of your car, you will probably struggle with that weight.

One thing you can improve is the saddle: the standard-fit item is pretty uncomfortable with minimal padding, but it’s easy to replace it with a better one of your choice.

For relatively undemanding off-road rides, the Vengeance E is great value. It offers enough battery power for a good half-day ride and – in ideal conditions – should live up to its 40 mile claim.

Components are chosen to hit the price point, so don’t expect the very best, but build quality overall is very good.

Since Halfords has regular sales, it’s always worth holding off and not paying full price for the Vengeance E: it’s considerably more tempting at £750.