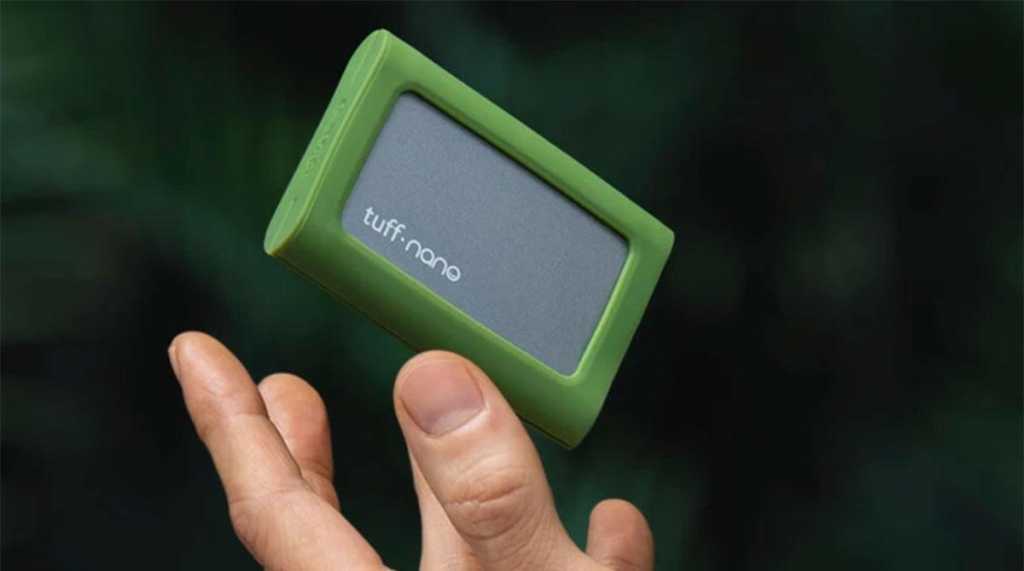 The CalDigit Tuff nano (512GB or 1TB) blew us away with its super-fast speeds, which are twice as fast as comparable portable SSDs. The drive achieved Read and Write speeds close to 1,000MB/s. It’s also robust, being IP67 certified – meaning that it can be immersed in water and is dust-tight. It can also withstand drops up to 3M.

Caldigit’s Tuff Nano is a very, very fast compact SSD drive that’s about half the size of an iPhone and uses a Toshiba PCIe SSD that achieved speeds close to 1,000MB/s in our tests.

To put that speed into context, the main competition in this space can achieve speeds in the region of 500-600MB/s.

It connects via USB-C, but comes with both USB-C-to-USB-C and USB-C to USB-A cables (both 25cm) so will work with just about any computer, including Thunderbolt 3 – although it will lose some of the T3 40Gb/s bandwidth advantage, being of the 10Gb/s Gen.2 USB-C variant.

Another advantage of the USB-C connection is that it is compatible with Apple’s iPad Pro, as well as PCs and Macs. This is a thoroughly modern portable SSD, and one, we think, that will especially appeal to MacBook Pro or other modern laptop owners.

With a large-file Read speed of 915.1MB/s and Write speed of 867.2MB/s, it tested twice as fast as the comparably priced Samsung T5 Portable SSD. It’s also a little smaller, and certainly tougher.

It’s also much faster than the Adata SD600Q, although it’s nearly twice the price.

Nothing else in a portable format has got anywhere near as fast as the Tuff nano. It’s the sort of performance we’d normally expect from a multi-bay RAID enclosure!

It uses NVMe – a communications standard developed specially for SSDs by a consortium of vendors such as Intel, Samsung, Sandisk, Dell, and Seagate.

This level of speed makes it highly attractive to professionals using uncompressed files, such as photographers and filmmakers. Its compact and lightweight form also means such users will find it handy when on location.

If you often get impatient when copying files, this could be the antidote to your finger-tapping sighs.

We use CrystalDiskMark for our hard-drive testing. We tested the entry-level 512GB model.

As its name suggests, the Tuff Nano is also robust. It is IP67 certified, meaning that it can be immersed in water and is dust-tight. It can also withstand drops up to 3M.

Handily, its packaging can also be used as a travel case for the drive and its cables.

New capacities on the way

The Tuff Nano is available now in two capacities: 512GB and 1TB.

For sheer speed, the Caldigit Tuff nano cannot be beaten in a portable SSD.

It is tiny and lightweight, impervious to everyday dust and water attack, and comes with modern USB-C (plus USB-A for older computers).

It’s a little pricier than some other (slower) SSDs but this won’t trouble professionals in need of the quickest portable SSD they can slip in their pocket.