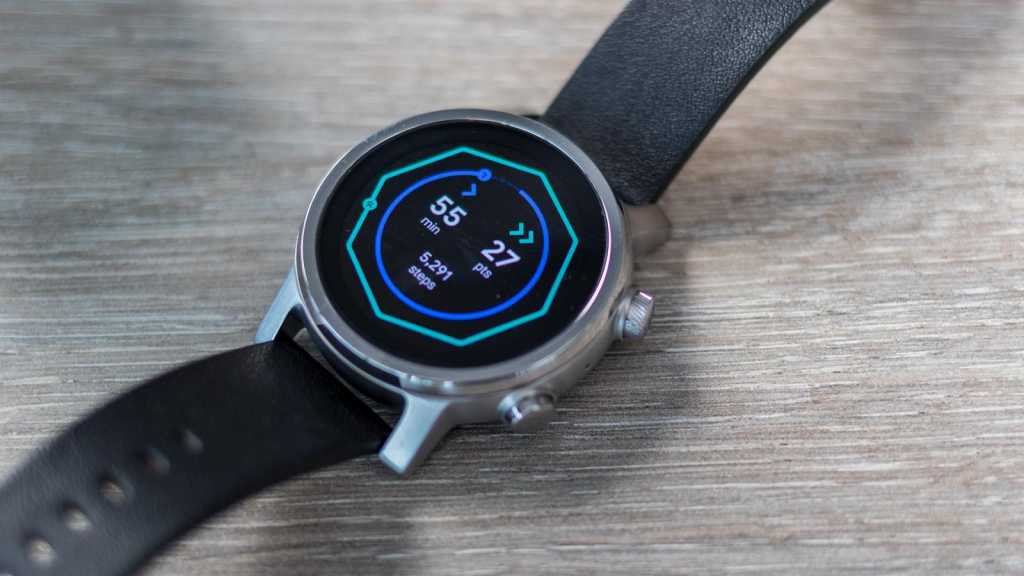 The new Moto 360 is much faster and generally better-looking than its predecessor, but the introduction of a chunky bezel around the 1.2in display means it’s not a cut-and-dry upgrade, especially at £299/$299.

Four years after the last Moto 360 was released, the smartwatch is back – but it’s not made by Motorola this time around. After officially leaving the wearable market back in 2016, Motorola licensed the Moto 360 brand to eBuyNow, a company described in the press release as a “strategic brand partner of the Motorola brand”.

Sporting the same overall design as the 2015 variant, how does the new Moto 360 stand up against the competition in 2020? 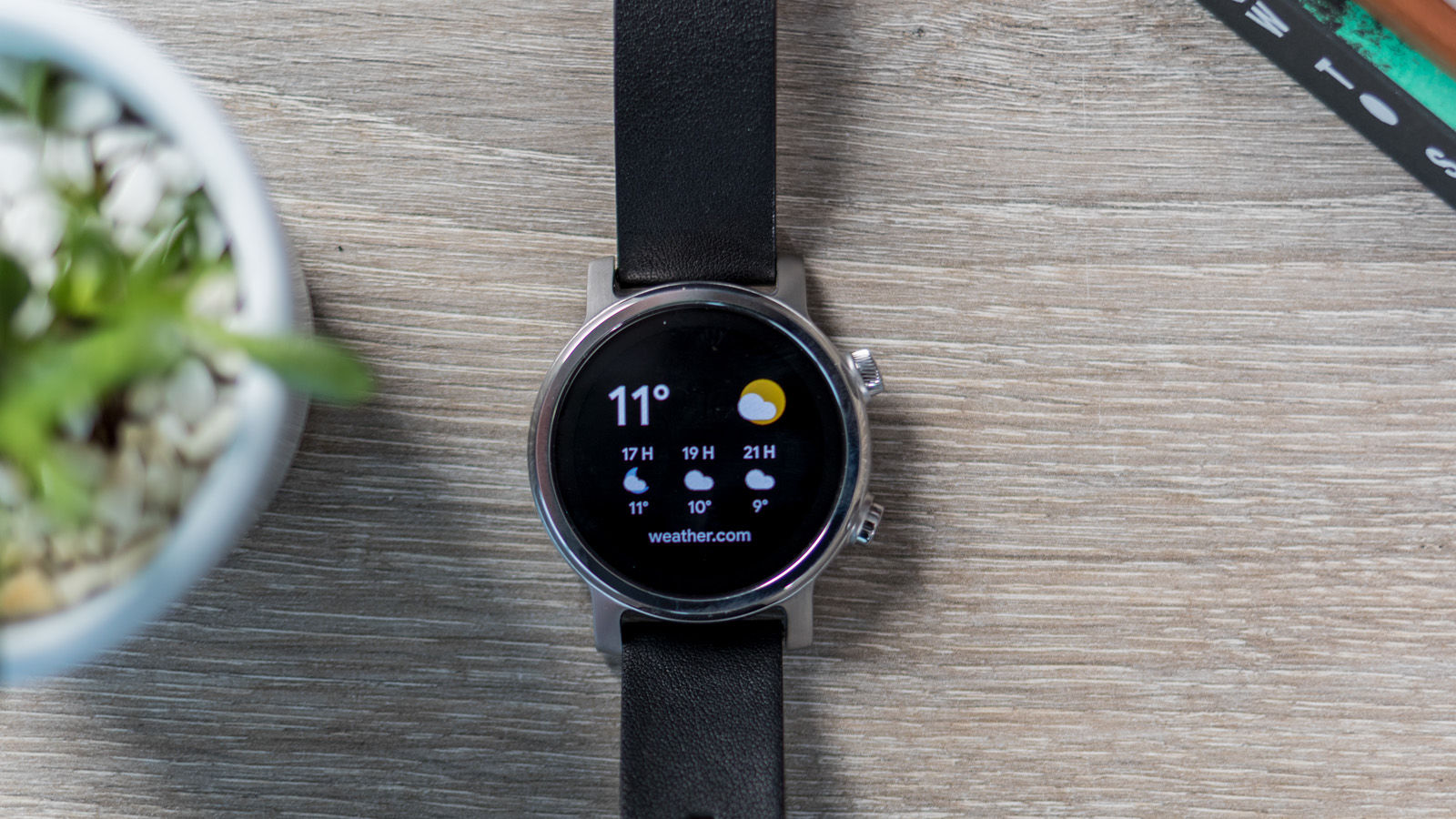 The new Moto 360 might be manufactured by a new company, but it looks much the same as the 2015 Moto 360 – although with a handful of changes that enhance the overall experience on offer. It’s still largely minimalist, featuring an aluminium body with a brushed finish, but you’ve now got a premium shimmer thanks to the inclusion of a SUS 316 stainless steel bezel surrounding the 1.2in display.

You shouldn’t have to worry about marking it either, as Motorola claims the stainless steel components are coated with PVD to resist scratches and keep shining – mine’s certainly still scratch-free after wearing it for a few weeks.

The new range is available in three colour options – Rose Gold, Steel Grey and Phantom Black – with a range of leather and silicone straps to match, further elevating the premium look of the new Moto 360, but unlike the Apple Watch, you can’t swap-and-choose the combination of colour and strap – it’s all predetermined.

The rotating crown, one of the key features of the previous-gen Moto 360, is back. Like with the Apple Watch, you can use the crown to scroll through your notifications and control the volume of music playback, and although there were concerns about resistance when using a pre-production model, it’s an issue that was ironed out by general release.

While it was once stiff to turn the crown, it’s now easy to twist the crown with a single finger, making scrolling a piece of cake, and the etchings help maintain grip as it rolls down your fingertip. 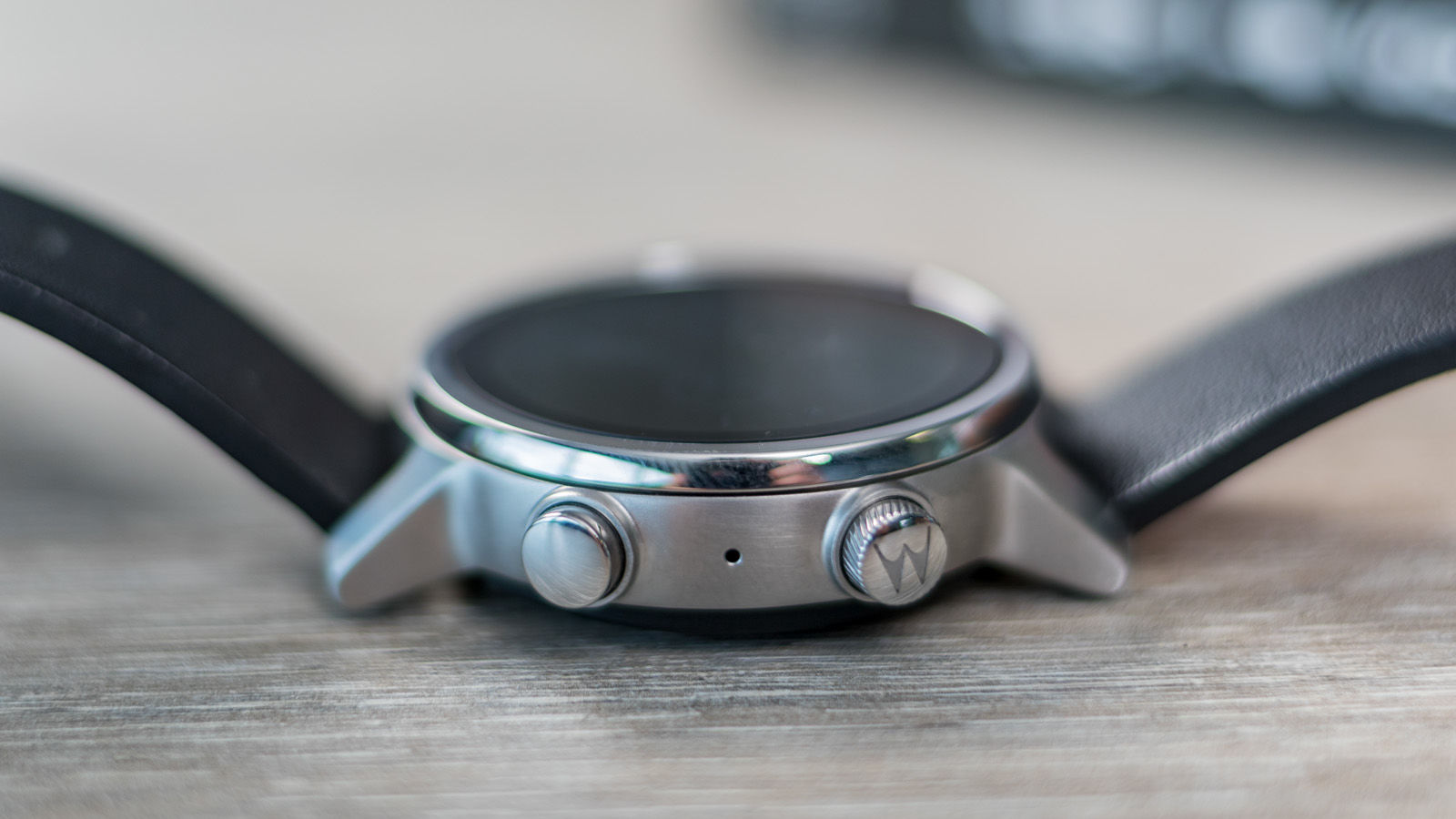 The eagle-eyed amongst you will also notice that there’s a new customisable action button beneath the rotating crown. This works much in the way that you’d expect; pressing the button opens Google Fit or any other app installed on the smartwatch, giving you quick access to your most-used apps.

It’s a handy feature, but one that’s certainly not unique to the Moto 360. Still, it’s a welcome addition and perfect if you constantly want to check on your daily fitness goals.

The new Moto 360 sports a fully circular, always-on 1.2in OLED display that’s crisp and bright in general use, and the dedicated direct sunlight mode is more than bright enough to use on a sunny day without having to strain your eyes or run for shade.

Unlike the previous Moto 360, the new variant offers an always-on display. It’s not the full experience, displaying a low-res version of your watch face when not active, but it certainly makes it easier to glance at the smartwatch to check the time or incoming notifications without having to rotate the wrist to wake the display. 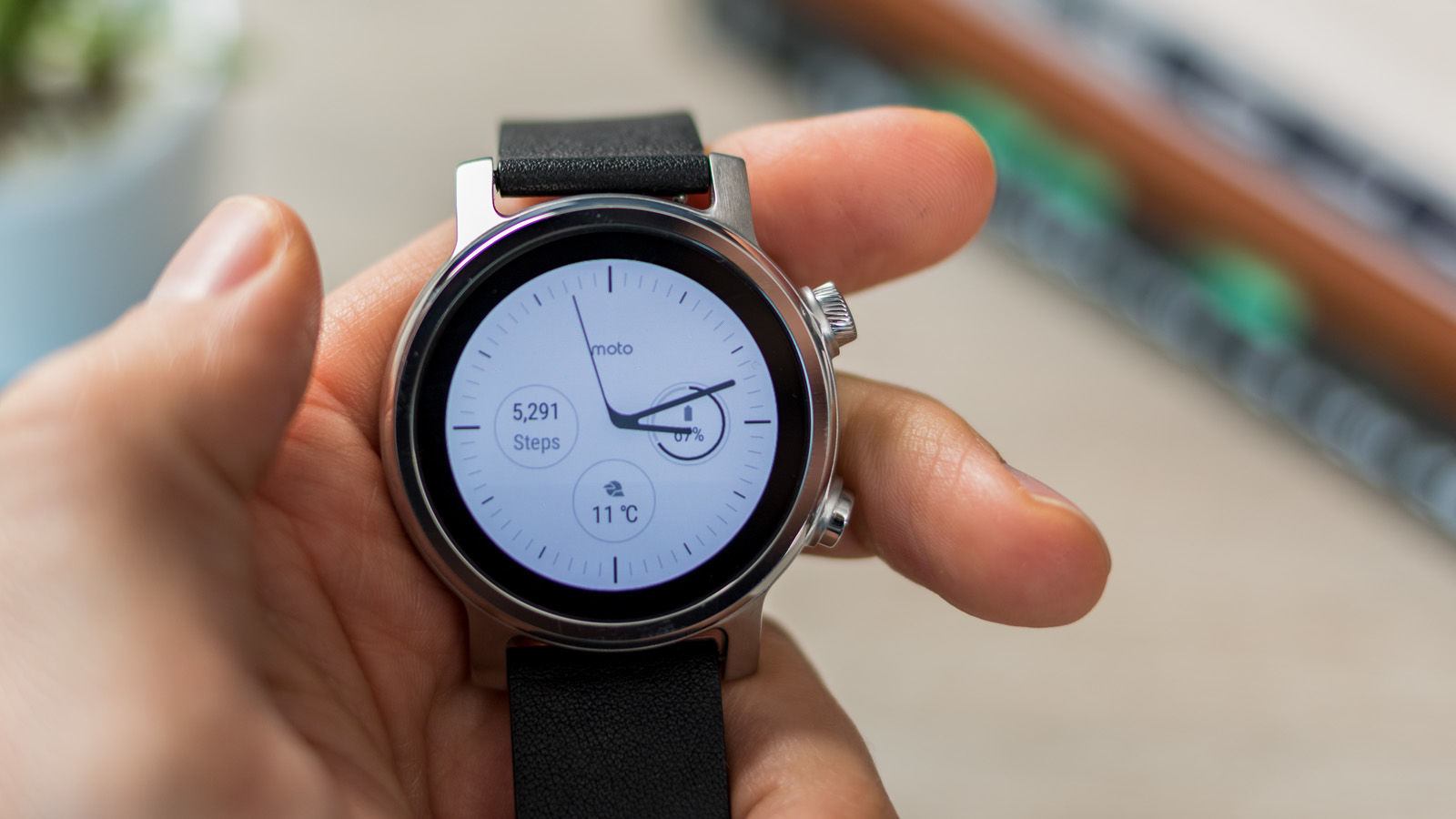 The infamous flat tyre isn’t present on the new Moto 360, much to the applause of Moto 360 fans, although we’re not sure that replacing the tyre with a chunky bezel surrounding the display is the right move.

We’d certainly prefer an edge-to-edge display with a flat tyre, as with the previous-gen, over the display of the current-gen watch. It’s certainly an odd move to introduce bezels were there were none, and seems like a step back rather than a step forwards.

It makes the premium smartwatch look dated when compared to the likes of the similarly priced Apple Watch Series 5, and we truly don’t understand the reasoning behind it.

Here’s a snap of the older Moto 360, for reference: 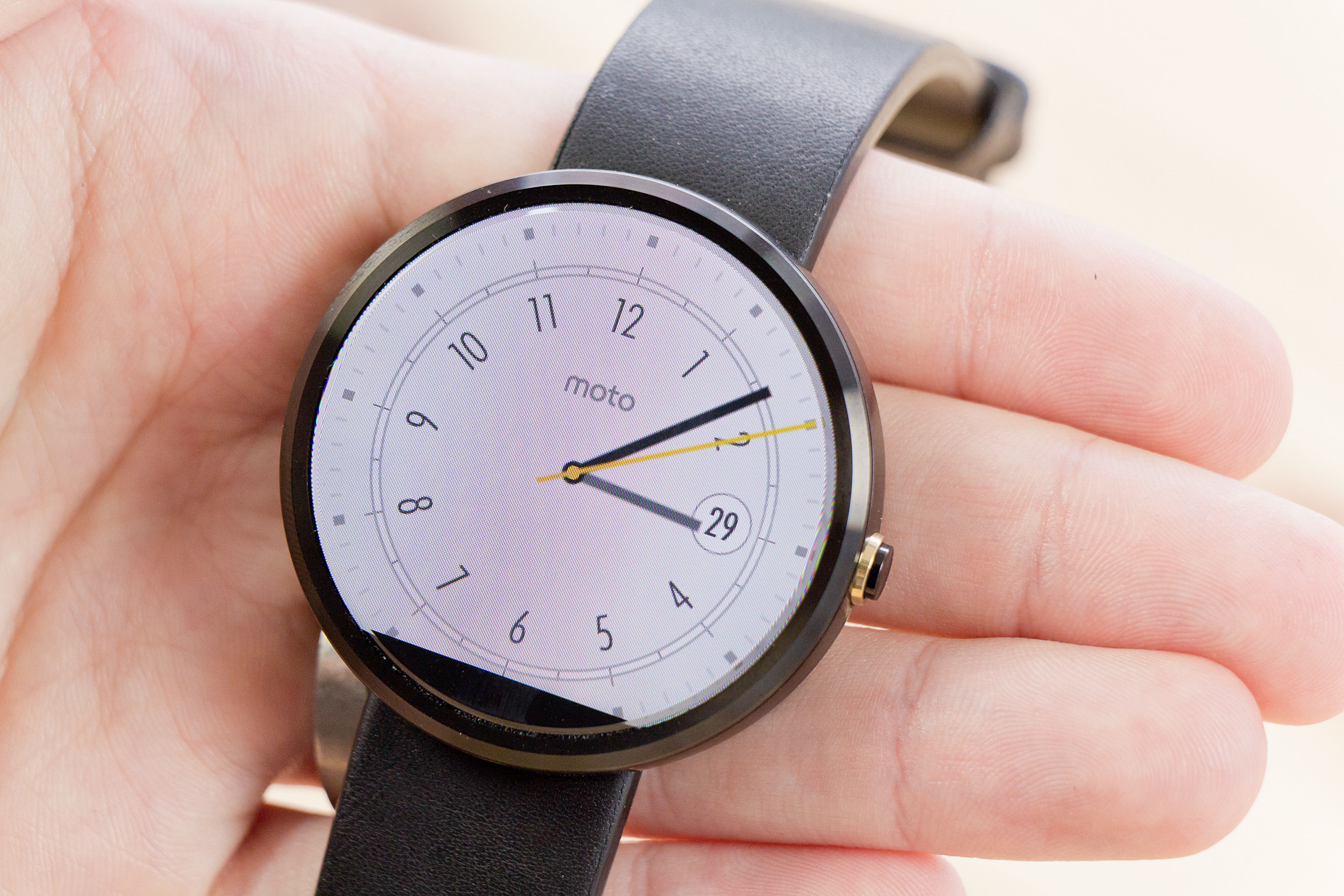 It should go without saying that the new Moto 360 offers performance gains compared to the previous-gen smartwatch, which came out way back in 2015. Like most Android-based smartwatches on the market in 2020, the Moto 360 sports Qualcomm’s latest Snapdragon Wear 3100 Platform alongside 1GB of RAM.

That’s more than enough to power the smartwatch experience, and there’s not a hint of lag to be seen. Whether scrolling through apps, using Google Assistant or customising your watchface, the Moto 360 handles it without a stutter.

Alongside the upgraded processor, you’ll find 8GB of built-in storage. With the Moto 360’s ability to install apps independently of a paired smartphone, the extra storage is much appreciated, and it’s double what was on offer from the previous-gen Moto 360. 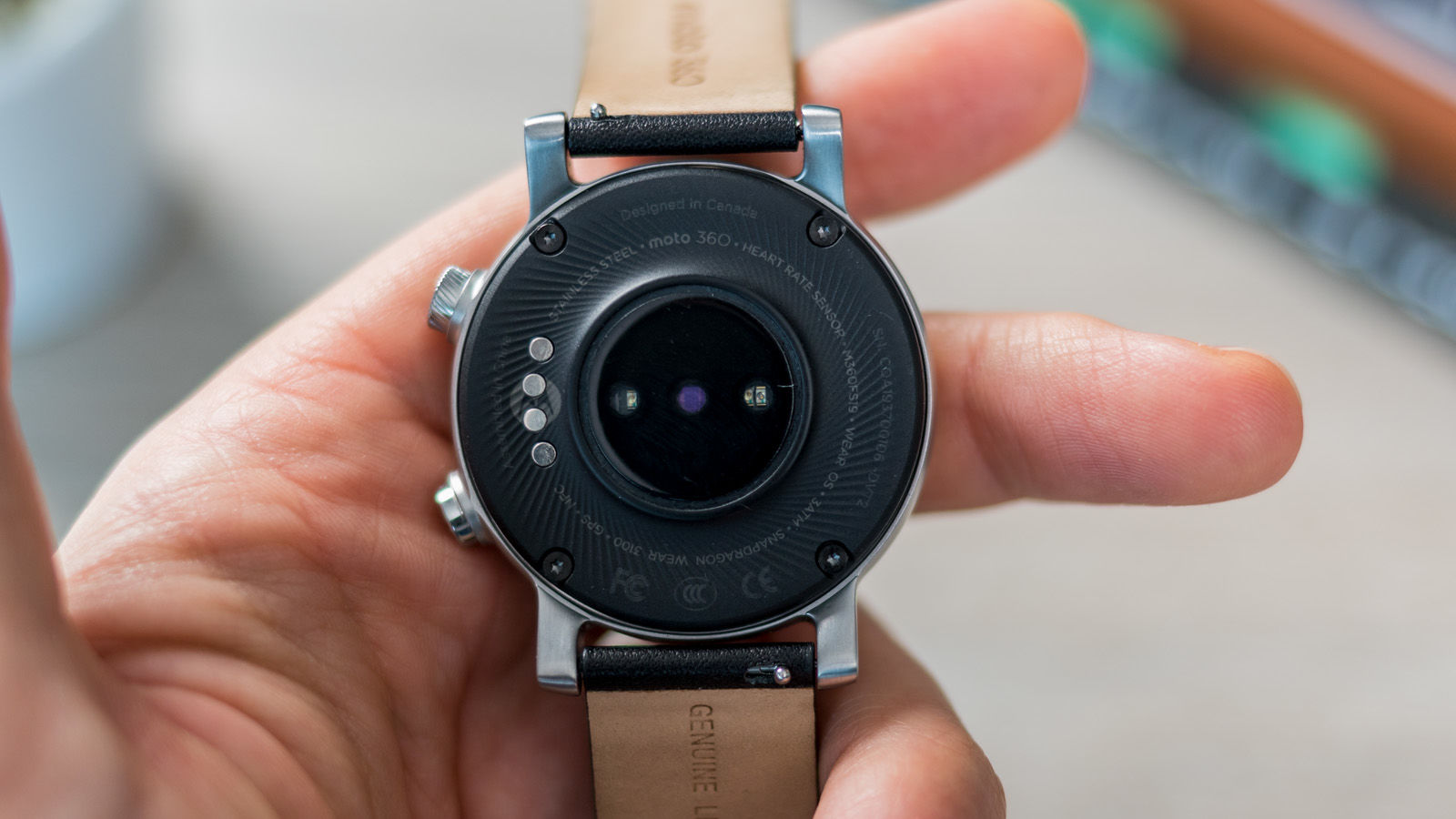 You’ve also got access to fitness tracking capabilities thanks to the combination of a built-in heart rate monitor and Google Fit. It’s not quite as advanced as some competitors, lacking key fitness-focused features built-in GPS to accurately measure exercise when your smartphone’s not nearby, but Google Fit does provide a wide range of exercise tracking options (including swimming, with 3ATM resistance) for casual fitness fans.

The exercise tracking isn’t quite as specialised as what’s on offer from the likes of the Huawei Watch GT 2 or the high-end Fitbits, but the Moto 360 gives you an overview of your workout along with fairly standard metrics like overall distance, heart rate, calories burned and more (workout dependent, of course).

With constant heart rate tracking and an always-on display, battery life could be a concern. Motorola claims an “all-day battery life” via the 355mAh battery, and generally speaking, that’s pretty bang-on.

Of course, it depends on what you’re doing – using the dedicated fitness tracking modes all day will likely drain the battery – but with casual fitness monitoring, it would comfortably last a day without seeing the low battery reminder. That’s a relief too, considering the battery life of the pre-production model I saw last year was one of its biggest problems.

Regardless of battery life, the good news is that when it does require a top-up, the contact charger that magnetically snaps into place provides a full charge in around an hour. 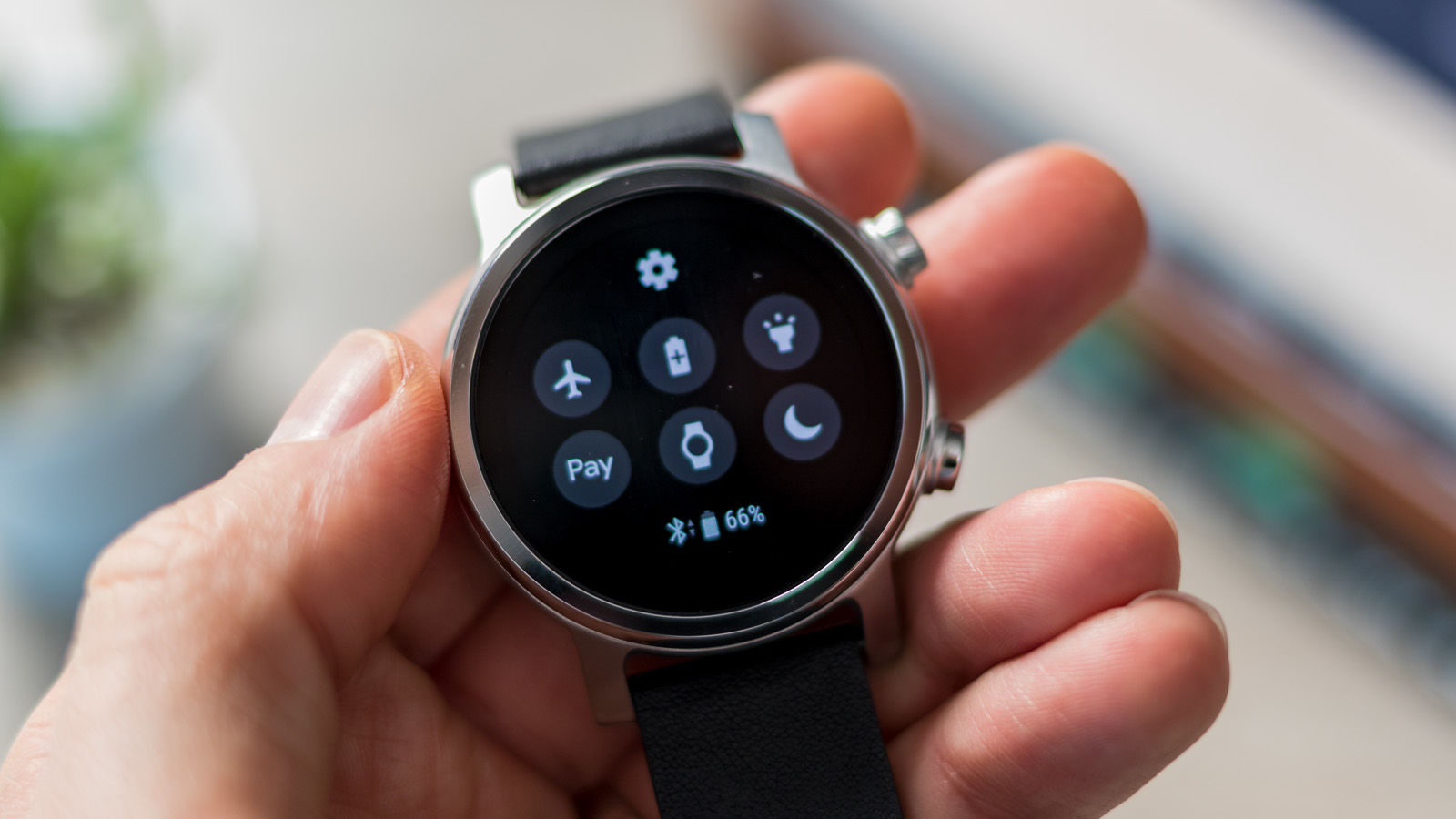 The Moto 360, like its predecessor, features Google’s Wear OS, bringing a variety of benefits and enhancements to the experience compared to smartwatch manufacturers like Samsung and Huawei that develop their own custom smartwatch operating systems.

The biggest plus of Wear OS is the Google Play Store; it’s built-in, requires no smartphone for the installation of apps and offers a wide range of apps whether you’re paired with an Android or iPhone (although there are a few omissions if you go down the iOS route). If you’re the kind of person that uses the likes of Google Maps or Citymapper to get around, the Moto 360 is a solid option.

Apps aside, you’ve got access to Google Assistant – whether paired with an iOS or Android device – along with with a variety of great-looking customisable watch faces, Google Fit integration and support for Google Pay too. There’s even a handwashing timer, although oddly, it’s set to 40 seconds and can’t be changed.

The Moto 360 is now available to buy in the UK, US and Europe following a staggered launch – it initially launched in December 2019, but wasn’t available in most countries until early 2020.

The downside is that it’s much more expensive than its predecessor in the UK, coming in at £299/$299 compared to £229/$299, putting it firmly in place at the high-end of the WearOS-enabled smartphone market.

If you want something a little more budget-friendly, take a look at our selection of the best smartwatches available right now.

The Moto 360 is a mixed bag; it’s a nice smartwatch with more features and a largely elevated design compared to the 2015 variant, but it’s not a cut-and-dry upgrade.

The display, while bright and detailed, features a noticeable bezel. Granted, it’s not the ‘flat tyre’ of the original, but we’d prefer the edge-to-edge display with a black bezel at the bottom to the circular bezel of the new display – especially with an increased £299/$299 price tag.

The good news is that the performance is strong, with no noticeable lag no matter what I demanded of the smartwatch, and the 8GB of storage is ideal for storing music for standalone use. You’ve also got the standalone Play Store at your disposal, but without cellular connectivity or GPS, you’ll need to be connected to a smartphone to use most apps.

Essentially, the Moto 360 is a great smartwatch with decent fitness tracking – you just need to look past the bezels.