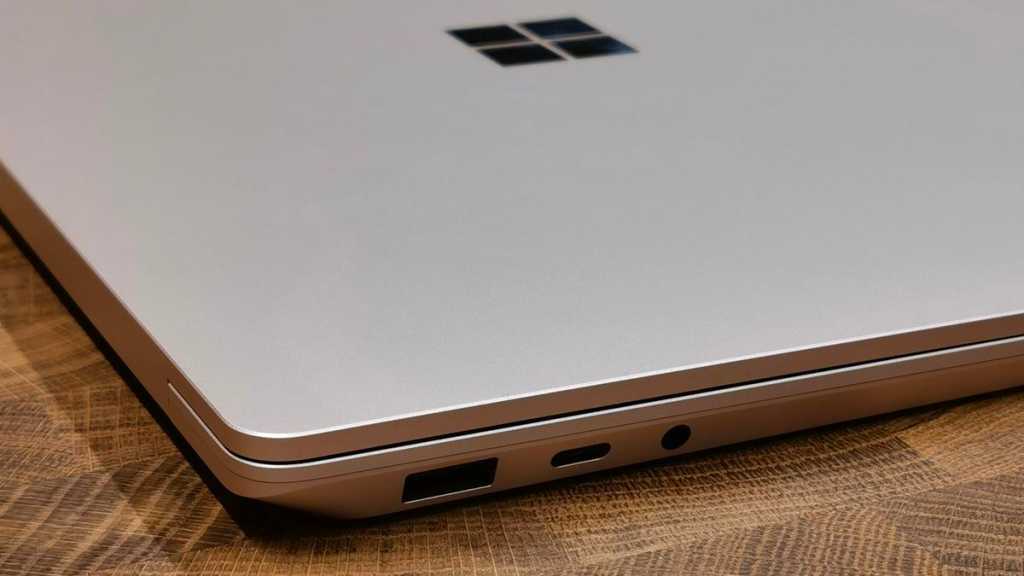 The new sizes, finishes, processor configurations and additional features like fast-charging all make this the most versatile generation of Surface Laptop yet. Long-term fans of the line will appreciate that Microsoft has finally embraced USB-C, albeit in a limited capacity. However, there are a few niggles that help competition from the likes of the MacBook Pro, stand out in front.

In the grand scheme of things, Microsoft is a relative novice when it comes to building laptops and yet the new Surface Laptop 3 makes a great first impression.

As the name implies, this is the third entry in Microsoft’s Laptop line in as many years but for the first time you now have the option of two sizes to choose between; a continuation of the 13.5in display size found on the previous two generations, and a new, larger 15in variant, which brings with it a number of differences beyond just dimensions to consider.

Microsoft unveiled the Surface Laptop 3 amidst a barrage of other announcements during its October 2019 presentation, which also saw the launch of the Surface Pro 7, Surface Pro X and more conceptual products like the Surface Neo and Surface Duo, expected to hit the market later in 2020.

In the UK, you can pick it up from Microsoft’s online store directly or other popular retailers, like PC World, John Lewis and Amazon.

Surface Laptop 3: What you C is what you get

First, let’s talk about some of the most visible changes. For the most part, the Laptop 3 looks like its two predecessors; the same precision-engineered slab of aluminium that we’ve seen before, albeit with some subtle but meaningful tweaks.

For one, the housing for the display has been machined in such a way that Microsoft hasn’t needed to fit a rubber bumper around its edge to protect the cover glass when you close the lid.

In fact, there aren’t any discernable screws anywhere on the Laptop’s body and yet this is also the first of the line to offer a replaceable SSD (although it looks like such a replacement needs to be carried out my a Microsoft-approved technician, if you don’t want to void your warranty, that is).

There’s also no lip around the seam between the display and the deck, to slip the tip of your finger in when the Laptop 3 is closed. Essentially, the design team pushed the needle towards form over function when refining the minimal aesthetics of this machine, only slightly though – the hardware here looks undeniably good and still functions as you’d expect without feeling cumbersome; especially the 15in model, which seems surprisingly light for its size.

When you open the Laptop 3 up, there’s a new, larger trackpad (sporting a size increase of about 20%, compared to its predecessor’s) and a refined backlit keyboard with nicely-spaced keys (1.9mm between each) and 1.3mm of key travel – actually less than the previous 1.5mm on the Laptop 2.

Microsoft hopes that despite the shorter travel, the typing feel is improved, thanks, in part, to new indented keys. Living with the Laptop 3’s keyboard, the typing experience is, for the most part, pleasing, although claims of a silent keyset seem a bit exaggerated, with minimal flex but a discernible, albeit dulled ‘clack’ as you type.

As before, the keyboard also conceals the laptop’s Dolby-certified Omnisonic speakers. It’s another move that prioritises a clean design over performance, but sound quality really isn’t terrible, despite what you might think for speakers that have to push through the keyboard arrangement itself.

They deliver sound with impressive clarity, albeit in a relatively narrow spread that dissuades enjoying media whilst off-angle to the Laptop 3. We just wish they were capable of pushing out better bass.

There’s far less to quibble about when it comes to visuals. The 2256×1504 PixelSense display employs the same 3:2 aspect ratio that’s characteristic of the Surface line (the 15in model sports a 2496×1664 resolution), making it great for written content and productivity purposes.

Colours, contrast and viewing angles are all promising and well-balanced too, meaning typical 16:9 media looks good, so long as you’re happy with the inherent letterboxing. Both versions sport a pixel density of 201ppi, not quite as sharp as the likes of the Surface Pro 7 (267ppi) or the MacBook Pro 16in 2019 (226ppi) but still more than enough for the use cases they’re tailored to.

The Laptop 3 is also one of the brightest Windows machines we’ve tested of late, falling just short of the max brightness output of the Huawei MateBook X Pro 2019, with a score of 413cd/m2 (compared to 460cd/m2 from the MateBook).

Having spent time with the new Sandstone treatment (which actually manifests as a pale gold colour), the other thing to note about the deck into which the keyboard is set is that it’s finished in colour-matched aluminium. You’ll still find the soft touch of Alcantara on the Cobalt Blue and Platinum finishes, as before, however, this year the black and the new Sandstone builds opt for a more traditional all-metal design.

It’s a simpler story with the larger 15in model, which only comes in black or Platinum and sports an all-aluminium finish, regardless of your preferred colour choice.

Elsewhere on the Laptop 3’s body, like the newly-unveiled Surface Pro 7, Microsoft has finally conceded to bringing USB-C to the range. While that in and of itself is an exciting prospect, it’s not without some pretty significant caveats.

For one, there’s only a single USB-C port on the left side of the Laptop 3, skirted by a 3.5mm headphone jack and a single USB-A port.

Worse still, while the port supports USB 3.1 (the USB-A port supports USB 3.0), it doesn’t support Thunderbolt 3, meaning, those in the market for a creative powerhouse with the option of external GPU support and the like won’t find what they’re looking for here.

Instead, such folk will likely swing towards the Laptop 3’s most closely-minded rival, the 2019 MacBook Pro (which comes in 13 and 16in variants), accommodating up to four USB-C ports, depending on the size of the machine you opt for.

The signature Surface Connect port remains on the Laptop 3’s right side, which means compatibility with the likes of the Surface Dock (which adds two Mini DisplayPorts, an Ethernet port, four USB-A USB 3.0 ports and an audio output) endures. Using this, the laptop’s improved 45.8Wh battery (which promises 11.5 hours of use across both sizes) supports fast charging, with the ability to replenish 80% of the machine’s charge after an hour plugged in.

Snap the machine’s new magnetically-attached deck off and underneath you’ll find an interesting array of silicon, depending on the size and SKU of Surface Laptop you opt for.

All of the 13.5in models are among the first on the market to employ 10th-generation quad-core Intel Ice Lake processors. Either the i5-1035G7 or the i7-1065G7, paired with the option of 8GB or 16GB of LPDDR4x RAM and up to 1TB of internal storage.

Making an i5 the lowest-tier of SoC you can pair with this year’s Laptop 3 seems smart, considering the performance disparity less-powerful chipsets would create, juxtaposed against the premium fit and finish that the Surface line is known for.

Not only is the heart of the 15in model different but the storage and RAM also vary.

For a start, similarly to its work with Qualcomm on the chip powering its new Surface Pro X, Microsoft teamed up with AMD to engineer custom Ryzen chipsets for the larger Laptop 3.

It’s unclear why Microsoft made such a distinction between the two sizes here, perhaps as a means of strengthening ties with partners. Interestingly, Intel-powered variants of the 15in model do exist but they’re only available to business customers.

The wider breadth and higher ceilings of RAM and storage available also suggest that Microsoft expects this year’s 13.5in model to take the cake, in terms of sales.

In testing both Intel and Ryzen models come across as comparable devices, based on benchmarking, however, the i7-based Surface Laptop 3 produced scores that were consistently 10% to 17% higher than its Ryzen-based counterpart – a small lead but an undeniable one.

The disparity may well be down to the older process on which these Ryzen chips is based (12nm vs 10nm+) – something that is already changing within AMD’s wider chip portfolio.

As for longevity – the gap between the two chipsets is far more pronounced. Our colleagues over at PCWorld.com discovered that, under test conditions, the power efficiency of the Ice Lake chip is undeniable when stacked up against the 15in model’s custom Ryzen framework.

With the brightness on both set to 250nits and earbuds set to 50% volume, a looping 4K video killed the Ryzen 7-powered model in 7 hours, 25 minutes, while the Ice Lake SKU threw in the towel at a far more promising 10 hours, 26 minutes.

In our own video loop test, the Intel-based Laptop 3 made it to 9 hours, 4 minutes – markedly less than front-runner, the MateBook X (2019), which broke the 14-hour mark.

Microsoft has built up the reputation of the Surface Laptop in an impressively short time and despite its checkered past, tainted by the likes of Windows 10 S, this third-generation shows far less of the uncertainty seen in its predecessors.

The starting price should appeal across both models too, considering the fit and finish on offer. However, the ‘future professionals’ that Microsoft is aiming at with these machines may find it hard to fall in love with the Laptop 3, despite its merits.

A lack of connectivity and ambiguation about its promised repairability and upgradability suggest that only those who are truly committed (or willing to commit) to the Surface experience specifically, need apply.

If you want a nice-looking laptop that’ll cover emails, web browsing, video streaming, spreadsheet work and perhaps some light gaming in style – choose one of the more affordable SKUs of Surface Laptop 3; for anything more demanding – your money will be better spent elsewhere.

Want to know what else to consider? Why not check out our Best Laptops roundup.