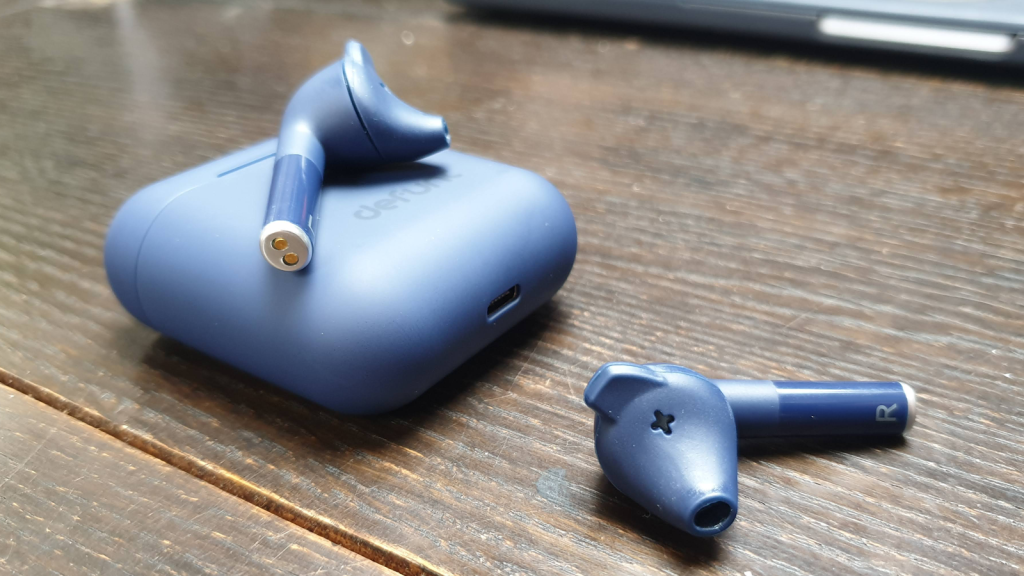 Although the Defunc True Go can deliver decent audio and sit comfortably in the ear, the experience is marred by overly sensitive controls and strangely loud status messages. These combine to frustrate the wearer and generally become annoying in no time at all. There are better devices out there, many of which are cheaper too.

A strange name and a slightly odd shape make the Defunc True Go something of a curiosity. We see if these new wireless earbuds from Sweden have more in their corner than just a quirky strain or whether they will give you the blues in our full review.

You can buy the Defunc True Go directly from Defunc for 499kr, which amounts to around £39.99. Alternatively, they are available on Amazon UK for £42.49.

US customers won’t find them on Amazon but can order direct from Defunct for $49.99.

They are among the cheapest wireless earbus on the market, then.

Ok, let’s start with that name. Maybe something has been lost in translation, as Defunc might sound groovy in Sweden, but elsewhere it’s easy to mistake for defunct, which is something you don’t want to brand your device.

If it’s more a Bootsy Collins-style ‘Bring Da Funk’ then maybe it makes sense, but from the outset this feels a bit, well, silly. Saying that, the multi-colour options suggest that Defunc could have a sense of fun, which is never a bad thing. They are available in four colours – black, white, red and blue. 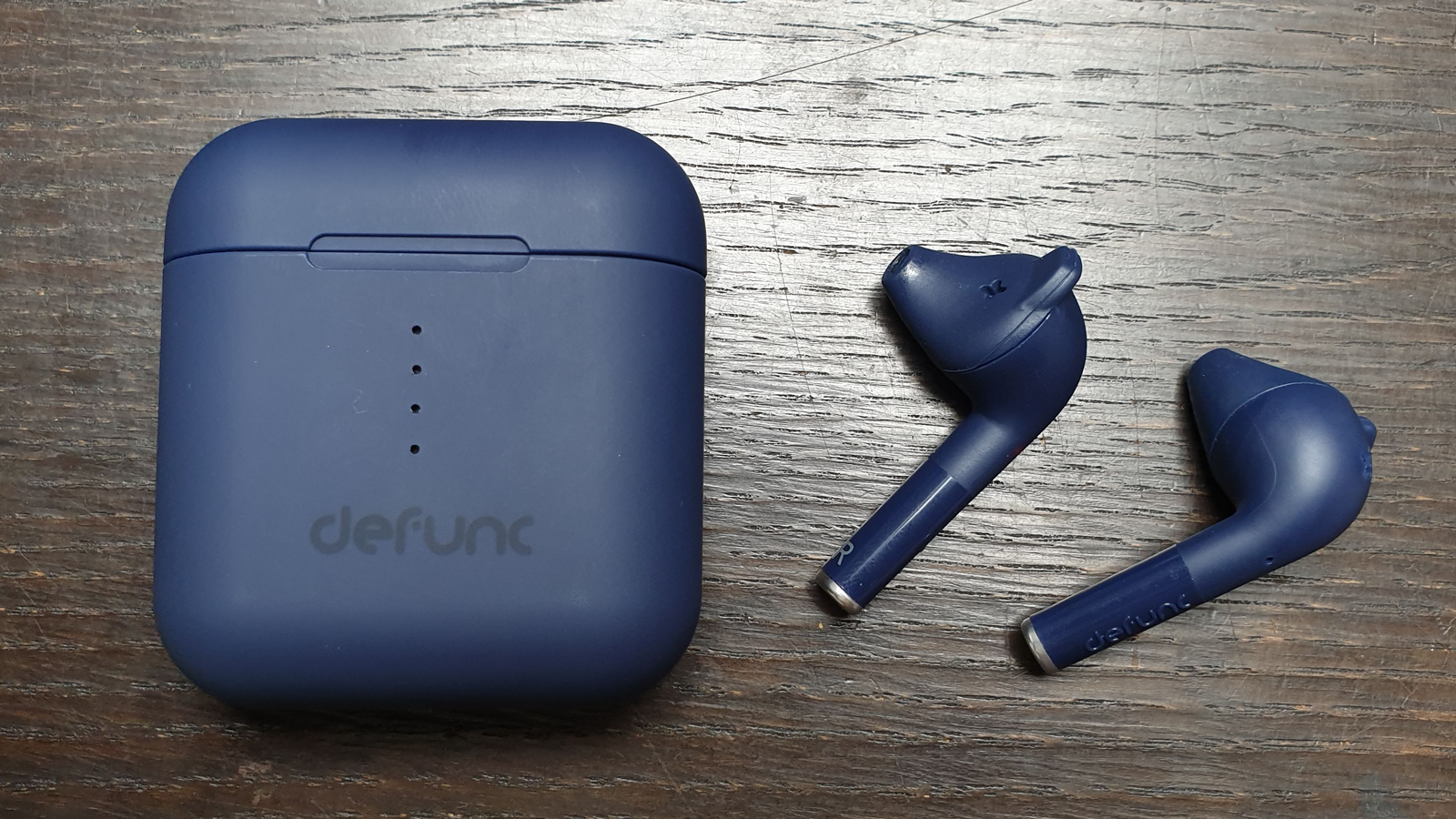 Our True Go review samples are a light navy blue that looks pretty cool and avoids the standard black or white livery that most earbuds adopt. Should you prefer tradition, then those colours are also available.

The same hue is found on the charging case which is also covered in the matt-plastic material adorning the upper part of the earphones. Four LEDs on the front panel let you know the current state of charge and should this need topping up then there’s a USB-C port on the bottom of the case.

Flipping the lid unveils the earphones themselves. At first glance they are not what we’d call pretty. The earbuds are attached to long stems reminiscent of Apple’s AirPods. But where Apple’s expensive earphones are elegantly crafted single pieces of shiny plastic, the True Go are something of a hodge-podge. Most of the stems are smooth plastic bearing the Defunc name, but the upper portion and speaker chambers are the aforementioned matt-plastic. Nothing wrong with that, but it’s the speaker covers that spoil the aesthetic.

These are rubber with a pointed tip for your ear canal and jutting out section to help the buds stay in your ears. The main issue is that they are obviously separate from the main body and the join is quite visible. We think this might be to allow the covers to be changed, say for a different size, but there are no additional covers in the box so in the end it just looks a bit cheap. 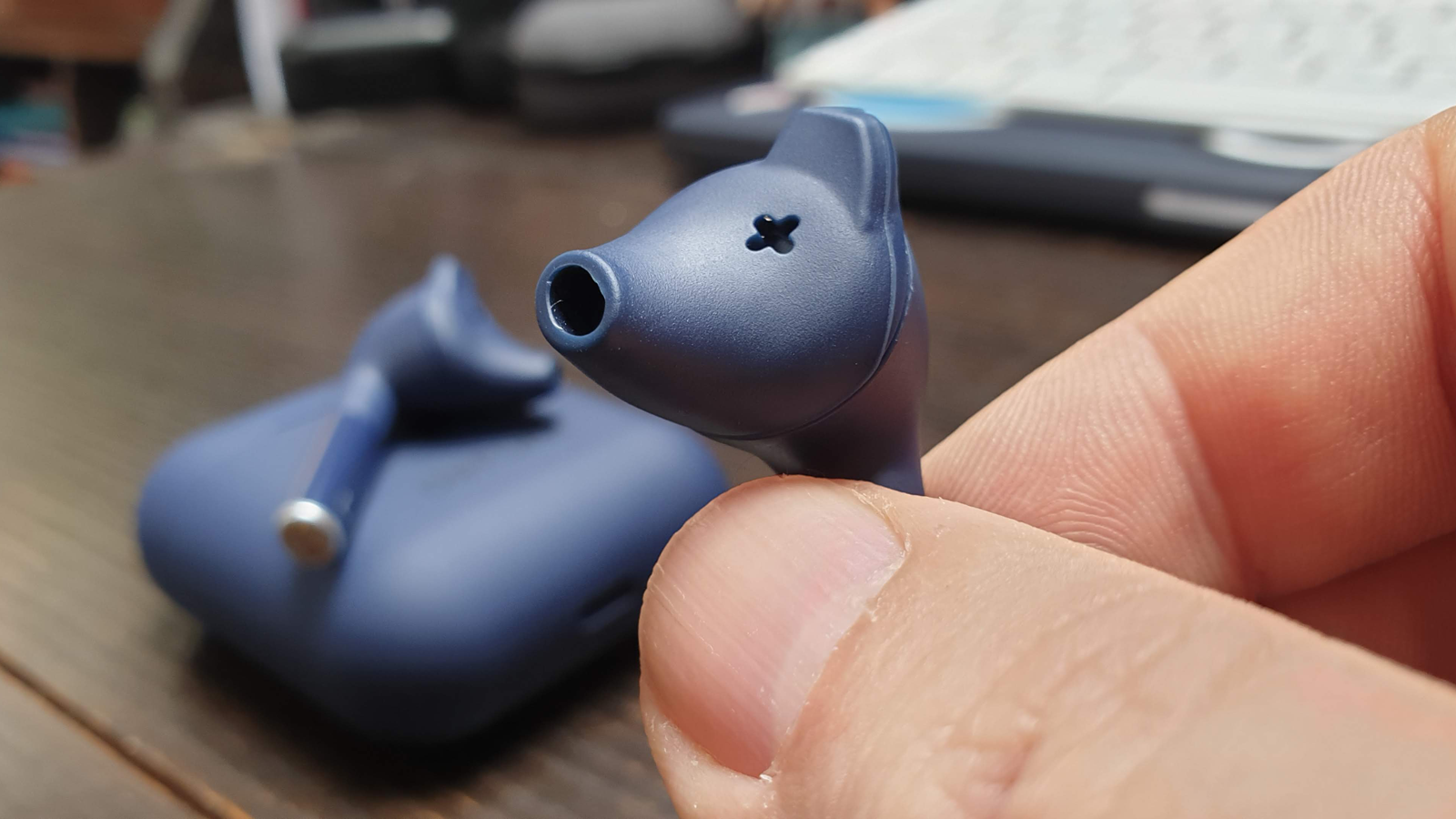 Defunc fits LEDs under the upper part of the stems, and these let you know when the headphones are in pairing mode, plus there are microphones for calls and voice commands. The main bulb at the top is where you’ll find the control buttons, albeit buried under the silicon. These are touch sensitive, requiring very little to play/pause along with various other commands.

Bluetooth 5 is the order of the day for connecting to your smartphone, tablet or other device, while an IPX4 waterproof rating means they’re fine to wear in the rain or while working out. Avoid taking them in the shower afterwards though.

It takes a few attempts to find a comfortable position for the True Go, as the pointed silicon earpiece or MultiTip design, doesn’t sit quite how you’d expect when you pop them in. With the stems pointing straight down, the earbuds feel loose and unseated, so we finally settled on the stems pointing almost horizontally out of our ears.

In this position the True Go are indeed quite comfy and feel secure. Audio quality is rich and balanced, albeit with a mid-range focus that takes a bit of sparkle out of the top-end. Bass is plentiful but lacks focus, bleeding into the mid-range hump at times. It’s perfectly acceptable for general use and feels full – particularly for spoken word content – but we’d say that the sound profile isn’t exactly neutral.

Volume can be deafening, so if you like your music loud then the True Go will deliver. Sadly, the built-in messages for connecting, low battery, or signing off when the battery runs out can be disproportionately loud when compared to the audio you’re listening to.

On more than one occasion we were given a nasty blast in our ears when the headphones were trying to be helpful, and we often found that the volume pushes up to maximum when re-connected to a device with once again the startling greeting message. Seriously Defunc, this needs to be addressed or your name will have to become Deaf-unc.

Another area of irritation is the controls. We like the idea of touch-sensitive areas rather than clickable buttons, as the latter can be uncomfortable to use. Defunc has gone a bit too far though, as the sensitivity of the True Go boarders on comedic at times. The instruction manual has a helpful tip to circumvent this, stating that you should try to hold the stems when placing the buds in your ear or adjusting their position.

The problem is that it doesn’t really work, so you need to touch the main body to ensure a tight fit. This almost always triggers a command, which becomes incredibly tiresome after a while. There’s often a delay too, so you can tap to start playing a track and find that nothing happens. So, you tap again only to hear the track start then immediately stop. The latter isn’t a problem unique to the True Go, but when added to the other control issues is become more pronounced. 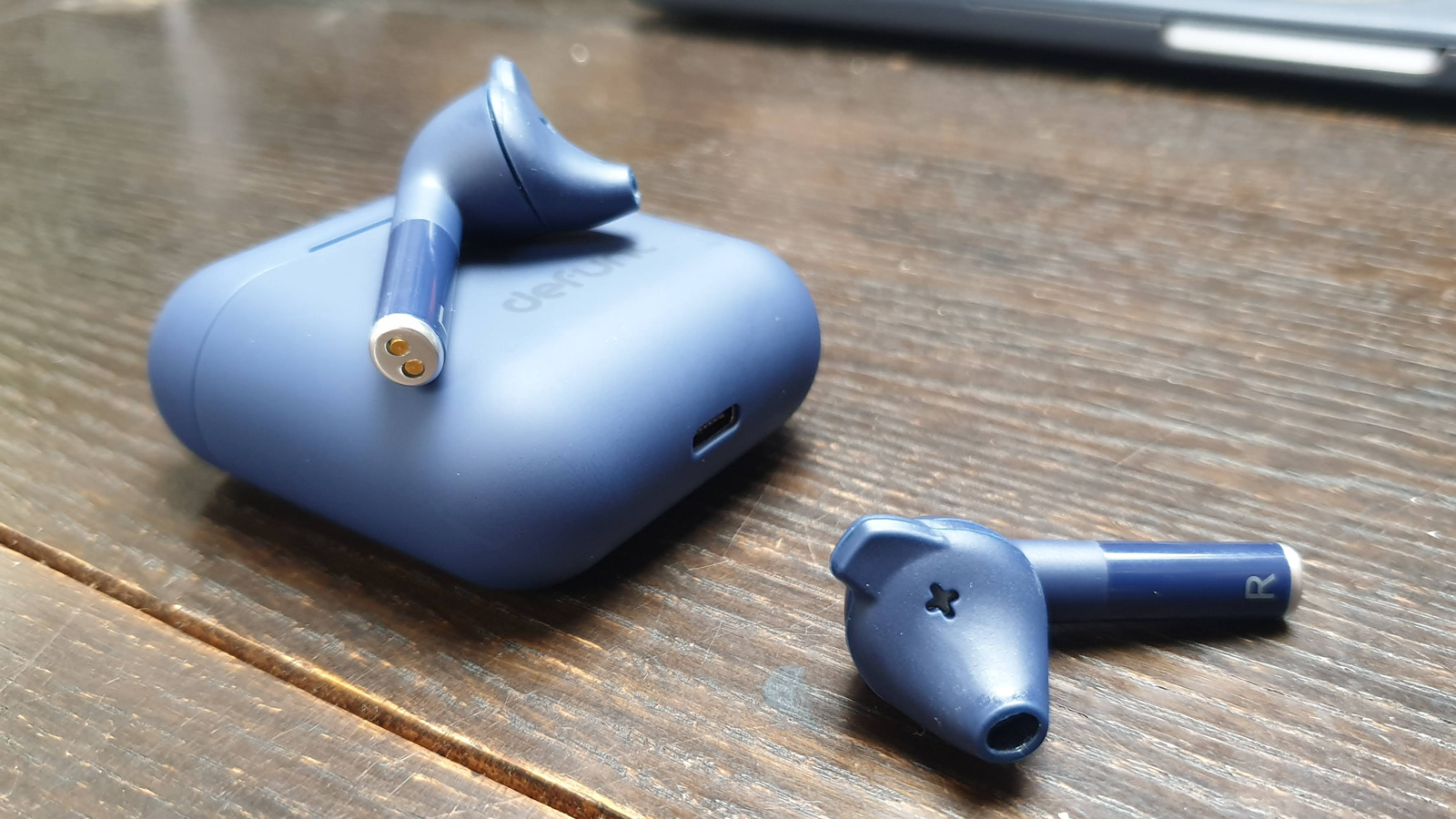 There are quite a few commands achievable through the touch-sensitive areas, with playing /pausing a track requiring a single tap on the right bud, skipping tracks is tapping twice, while skipping back is a double-tap on the left bud. Answering and ending calls is a single tap again, you can reject incoming calls by touching and holding any earbud for a few seconds, plus you can trigger the phone’s voice assistant with three taps.

There is a feature for redialling the previous number by holding any bud for a couple of seconds, but we struggled to get this to work and were frustrated again as holding for around three seconds turns the buds off. Holding the touch-area again turns them back on, but of course at maximum volume and with the shouty lady hollering in your ears.

Microphone quality is average, with the recipients of our calls reporting that our vocal tones were boomy and slightly muffled. Not terrible, just average. One thing that was good though was video syncing. Watching Netflix, YouTube and other content on our phones, tablets and PCs found stable and well-matched audio and video, with no obvious delay.

Finally, the battery life is pretty standard. Each charge gives around three hours or a little more, and the charging case can restore power up to five times, taking an hour and a half to do so.

It’s hard to recommend the Defunc True Go. The flaky controls are frustrating, and the sudden high-volume experiences are genuinely unpleasant. Also the design is unlikely to fit well with a broad range of ear shapes.

When the earphones are behaving themselves, they deliver good quality audio and feel comfortable in the ear, but it’s not enough to make up for the downsides.

At the £40/$40 mark there are plenty of other earbuds we’d suggest ahead of these, with the Redmi AirDots an obvious choice, and if you want AirPod-style design then there’s the Xiaomi Mi True Wireless Earphones although you’ll spend a bit more to get those. Either way, we’d give the Defunc True Go a miss.