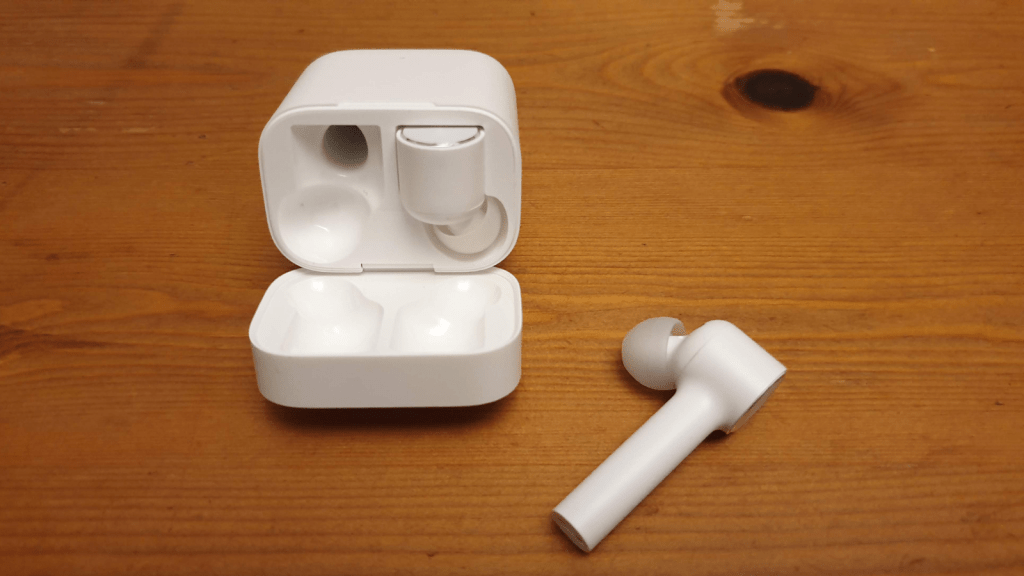 With their Apple-style design, the Mi True wear their inspiration firmly on their matt-white sleeves. That doesn’t mean they are pale imitations though, as the mixture of good sound, excellent call quality, fast recharging, and comfortable, reliable controls makes for an appealing all-round experience. The video syncing issue is a shame, and might rule these out for some, and the noise cancelling isn’t much to write home about either. But if audio is your main demand then the Mi True can deliver solid tones wirelessly for a lot less money than the AirPods they emulate.

In the last year or so, Xiaomi has made a habit of taking on the big brands with their own innovative devices, all at prices that often put the others to shame. Now the Chinese company has Apple’s ubiquitous AirPods in its sights, with an asking price that’s less than half of its rival. We see whether the value is True or not in our full review.

Xiaomi offers its Mi True Wireless Earphones directly from its own store for £79.99 in the UK. You can also pick them up for £65.49 from Amazon UK or £44.86 from Gearbest, although the latter may incur import costs.

Xiaomi doesn’t currently have the True earphones in its US catalogue, but you can import them via Gearbest for $75.99.

If you prefer not to have the stems sticking out then there’s also the excellent Redmi AirDots from Xiaomi which are available for around £25/$25.

Taking a rather large design cue from Apple’s AirPods, Xiaomi’s Mi True wireless earbuds feature speakers attached to short stems which hang out of your ears when wearing them. One major difference is that the buds are in-ear rather than resting on the opening of the ear canal like the Apple variant, meaning you can get a more secure fit when listening to music while out and about or at the gym.

The speaker chambers are also home to touch sensitive buttons that allow you to control audio playback, calls and your phone’s digital assistant by gently tapping the surface. This is preferable to the clicking buttons often found on cheaper models, as the bud isn’t forced deeper into your ear every time you want to pause or play a track.

On the inner edge of the speaker chambers are small black dots where the infrared sensors live. These, much like on Apple’s AirPods, mean that removing one of the buds from your ears causes playback to pause immediately. Great for when you want to answer someone’s question or hear a station announcement when travelling.

The speakers themselves have 7mm neodymium magnets and plated titanium coils, plus there’s an additional noise cancelling mode that can be activated by touching and holding the control button area for around three or four seconds.

The stems contain microphones which are aided by what Xiaomi claims is ‘beamforming +ENC technology’ that helps with background noises. IPX4 waterproofing makes the Mi True robust enough to endure splashing water and sweat, but don’t expect them to survive being submerged.

Finally, the carrying case is a matt white rectangular box with a hinged lid, small LED light to indicate the charging status, and USB-C port at the bottom for charging. It’s an attractive and simple design that allows the earphones to slide easily in and out, with the magnetised charging connectors holding them safely in place.

Pairing the Mi True is a simple task, as we’ve grown accustomed to with most devices in this category. The first time is a matter of charging them in the case then holding down the button on the side of box until the white light starts flashing. Then you just find the Mi True listing on your device’s Bluetooth list and connect them.

After that, they are meant to auto-connect whenever taken out of the case, but we often had to reselect them from the list once more. No big deal, but it’s an extra step that other devices manage to take by themselves with more reliability.

Sound quality is open and clean sounding. The bass tones are a little light, with the Mi True relying more on the mid and high frequencies, but it’s not always bad thing. Obviously if you’re looking for pounding low-end for dance music and the like then you’ll want to give these earphones a miss, but for the most part we enjoy the spacious audio these deliver, with a satisfying mix for a wide variety of music and spoken-word content.

Engaging the noise cancelling mode seems to make no real discernible difference apart from a slight adjustment to the mix. As these are in-ear devices, they do a pretty good job of cutting out extraneous noises as it is, so we’re not convinced that the reduction circuit is really needed anyway.

One disappointment is the very slight delay the earphones have when watching video. Be it YouTube, Netflix or any other service, there’s a noticeable lack of syncing. This is something that troubles some cheaper models, but we expect better at this price. The Lypertek TEVI we reviewed only cost a small amount more but ar rock solid in this department.

The controls can take a little getting used to, as they use a double-tap rather than single to play and pause audio or answer/hang up calls. The response is consistent, even when only gently brushing the surface, which is impressive. There are a few different sequences to remember, as double-tapping on the right earphone plays or pauses any audio you’re listening to, while the same command is also used to answer or end calls.

Activating the voice assistant on your smartphone is a double-tap on the left earphone and to toggle the noise cancellation feature you need to tap and hold either bud for a few seconds. Sadly, there’s no track change or volume control option, which is a shame as sliding a finger up or down on the surface seems like it would be the perfect solution for at least the volume. Perhaps something which may be added the next version of the Mi True or with a software update.

To test the microphones we called a few friends, all of whom were surprised when we told them we were using headphones, so that’s about as positive a review as you can ask for. Audio on our end was also bright and distinct, making it a fine performance all round.

From a single charge the Mi True lasts for just over three hours between charges and can be powered up again by the case for a maximum of three times before needing to plug in the charger. Popping the earphones into the case after they’re drained sees a return to full power in around an hour, but after just 15 minutes our Trues were back up to 60 percent, so you’ll be able to carry on with that podcast, album or audiobook with little interruption.

One nice touch is that the earphones give you gentle warning tones to inform that the percentage of charge has reached 30, 20 and 10 percent. Then, there’s a little melody as the units shut down when the battery is exhausted. It’s reminiscent of lift music, but we have to admit it’s strangely comforting and better than suddenly cutting out or beeping harshly.

At around £80/$80 the Mi True Wireless Earphones aren’t the cheapest wireless earbuds around, but they do offer excellent value when compared to the Apple AirPods that inform much of the design.

Audio is very good, if a little light on bass and call quality iss excellent. The controls perform consistently well, too, but we’re disappointed by the video syncing issues and the noise cancelling doesn’t do much.

On all other counts the Mi True are reliable, easy to use, and deliver enjoyable results.

In this price bracket they’re up against some tough competition though, as we think the Lypertek TEVI still offer more polish, but if you want Apple-style design and a solid pair of wireless earphones then the Mi True are a good choice.