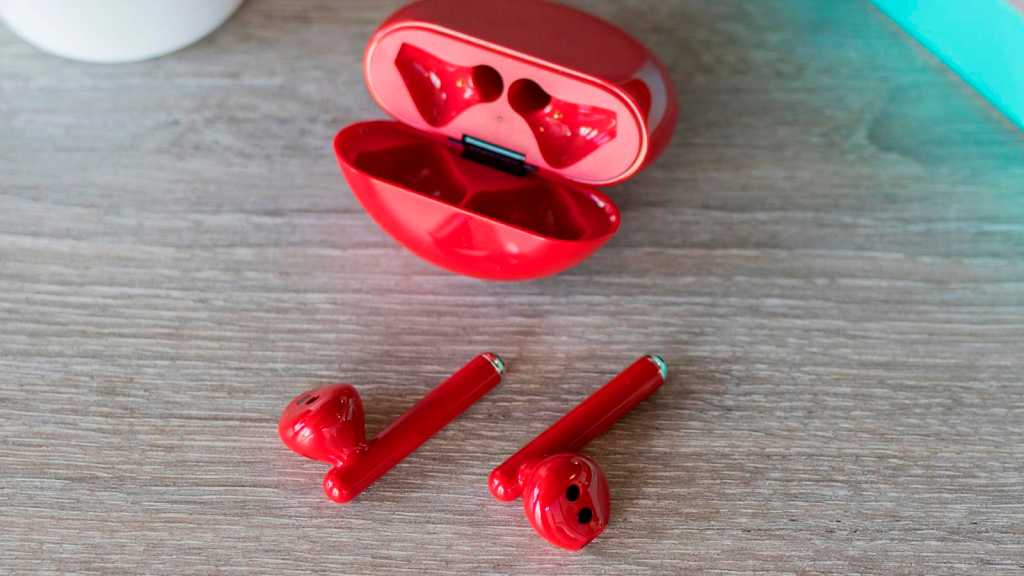 Offering great sound quality and active noise cancelling, the Freebuds 3 are good value at current prices. The noise cancelling isn’t effective in all situations though, so read the full review before buying.

The Freebuds 3 are Huawei’s third-gen true wireless earbuds and the world’s first open-fit versions to have active noise cancelling.

Others, such as Sony’s WF-1000XM3 and Apple’s AirPods Pro, use silicone tips for an airtight seal, and so aren’t an open design.

This review was originally written in October 2019 just before they launched, but since then a fetching red version has launched and the price has dropped dramatically.

You can buy the Freebuds 3 from  Amazon for £113.99, though the white version is a few pounds more expensive than red and black. 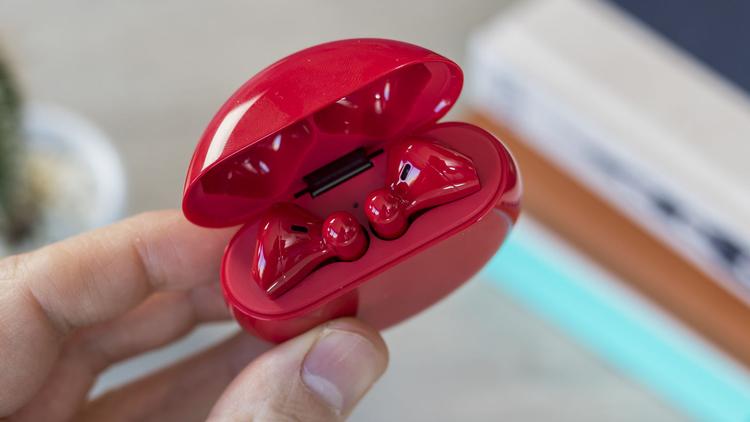 However, you can get the Freebuds 3 for free if you pre-order a Huawei P40 phone.

The new, lower price is a third less than the £169.99 RRP which already undercut the AirPods 2, which cost £199 from Apple with the wireless charging case, although you can find them for  under £160 from Amazon.

Of course, the Freebuds have a few advantages over the AirPods, including that active noise cancelling )(ANC).

In the intervening months since the Freebuds 3 launched, Apple released the AirPods Pro with ANC, but these are even more expensive and have a closed, not open, design.

If this is too steep for you, check out our roundup of the best true wireless earbuds for cheaper alternatives. Note that the FreeBuds 3i offer a cheaper version at £89.

There’s no hiding the fact that Huawei has taken inspiration from the AirPods in terms of design. The case, although circular, has a flip top and a little LED to indicate the charging status.

Opening the lid also causes the Freebuds to power on and connect to whichever device they’re paired with. 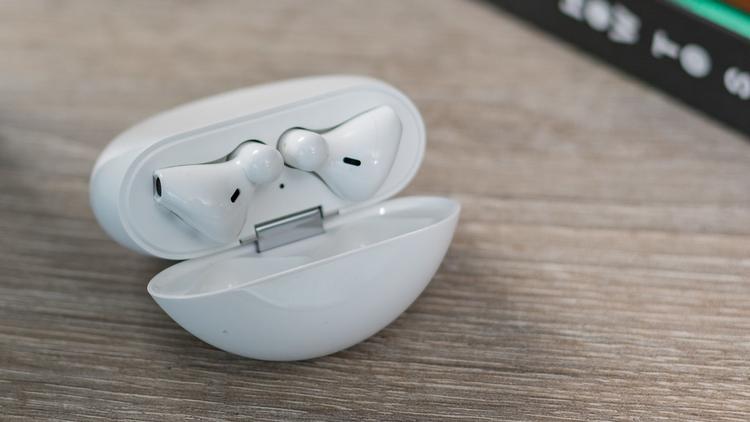 Designed to work with Huawei phones, particularly those running Android 10, the pairing process works exactly like AirPods on an iPhone. Bring the case near your phone and a window pops up asking if you want to pair them, a process which takes a second or two.

On other phones you can pair them in the traditional way by going to Bluetooth settings. However, it’s important to note that in order to adjust the active noise cancelling you need the Huawei AI Life app, which is accessed by scanning the QR code on the box.

In a bit of a U-turn, Huawei has released the AI Life app on the Google Play Store, after saying it would only be available in Huawei’s own app store, AppGallery. It isn’t available to iPhone users at all, but the Freebuds aren’t aimed at iPhone users.

In the AI Life app you’ll find a dial which you can turn to adjust the noise cancelling effect. Huawei says the effect varies for each person, which is why you have to turn the dial to the position that works best for you. 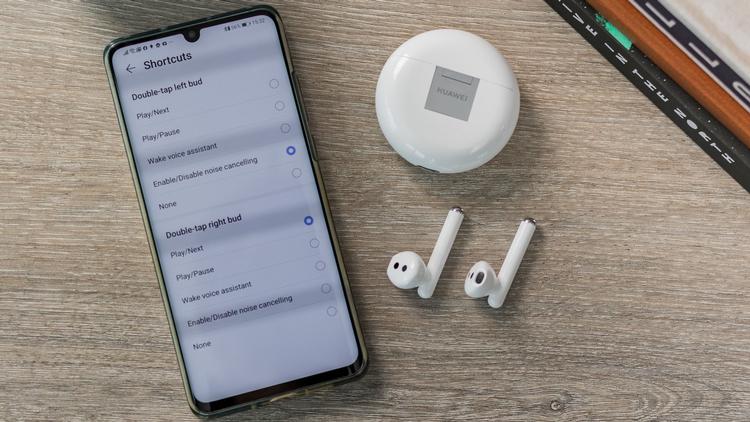 You can also change what happens when you double-tap each bud, but by default the left one is set to enable or disable active noise cancelling, and the right to play media or skip to the next track.

It’s also the only way to check on the battery level of each bud and the case.

The buds’ design is very like the AirPods and they’re a universal fit, so unless you have enormous or tiny ears, you should find they sit snugly in your ears.

There’s a microphone at the bottom of each one, and these are used for phone calls as well as talking to your phone’s assistant. When making a call, the recipient will benefit from the Bone Sensor Enhancement, which means your voice doesn’t only come from the microphones. It also uses bone conduction, so the vibrations made inside your ear when you speak are transmitted to whoever you’re calling and this results in a much clearer sound with less background noise. And it works, too.

Aerodynamic mic ducts attempts to shield the microphones from wind noise, and Huawei says you can cycle along at 20km/h and make a noise-free phone call.

Like the AirPods, Huawei has designed a chip specifically for the Freebuds. Called the Kirin A1, it integrates Bluetooth 5.1 and BLE 5.1 with a signal processor, sensors and power management hub.

Also note that the 2.3Mb/s transfer rate is high enough to support hi-res audio, while some rivals can’t even offer half that speed.

With noise cancelling enabled, the Freebuds 3 will last four hours. That might be too restrictive for some people, but once you factor in the battery in the case, you can have a total of 20 hours of playback before needing to recharge the case.

That can be done wirelessly (even from your P30 Pro or Mate 30 Pro using Reverse Wireless Charging) or by a USB-C cable. If you do use a wire, the case will charge twice as fast as the AirPods’ case, and wireless charging is 50% faster.

Despite being open-fit, the Freebuds 3 offer impressive sound quality with great bass levels, especially when you enable Dolby Atmos on a Huawei phone such as the P30 Pro. 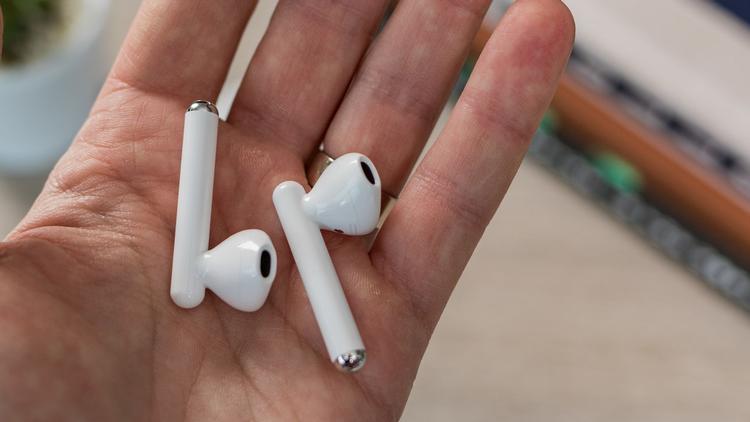 They’re also nice and loud, but you’ll struggle to hear music clearly when it’s noisy around you, such as when you’re walking along a busy road, say.

Vocals are crisp and clear, but the soundstage isn’t quite as wide or instruments as well defined as with the Sony WF-1000XM3.

We tested with a P30 Pro running Android 10, and were relatively impressed with the low latency when watching videos: lip sync issues weren’t too bad. This is a problem with all Bluetooth headphones, but the fact that audio is sent directly to the left and right buds independently does help.

If anything, the P30 Pro is at fault here, as we’ve found it to have worse Bluetooth lag when testing other wireless earbuds than when using other phones. Indeed, SoundGuys found that the Mate 20 Pro had an average latency of a staggering 484ms.

We also experienced some dropouts in busy environments such as on trains and buses, and had exactly the same issues when Huawei sent over a replacement set in the new red color.

Do note, though, that the ultra-low latency is only available if you pair the Freebuds 3 with a Huawei phone running EMUI 10. Yet, as we’ve said, this didn’t work amazingly well in our tests.

As mentioned, call quality is very good, both in terms of the clarity of the person speaking to you as well as your voice. We tested this in noisy environments and the recipient could still hear us clearly.

What about noise cancelling? Well, it’s far from perfect. In an office environment it does a decent job of removing air conditioning and general background noise, but didn’t noticeably reduce the volume of people talking or typing. It’s also good on public transport, except for the ridiculously noisy London Underground.

There, and wherever there are high levels of background noise, such as walking down a city street, the system less effective. However, a worse problem is the wind noise that appears to be picked up by the mics. This is easily noticeable even if you walk indoors at a brisk pace, not simply when there’s a strong breeze outside.

Sometimes this can be reduced by adjusting the dial in the AI Life app, but that’s inconvenient and shouldn’t really be necessary.

Finally, the Freebuds 3 weren’t always responsive to a double tap, and we’d have to try several times on occasion for it to register.

If you dislike noise-isolating earbuds and want to hear your surroundings, the Freebuds 3 are a decent choice. Huawei doesn’t hide the fact they’re designed to work best with its own smartphones, which is fair enough considering that’s the situation with AirPods.

Just bear in mind that the noise cancelling isn’t the most effective you can get.