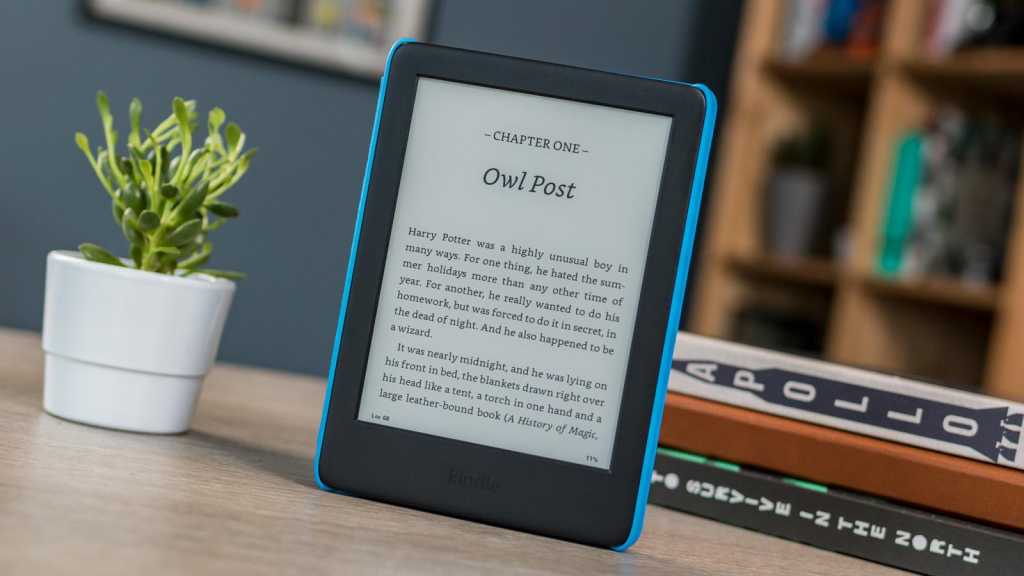 With a case, warranty against accidental damage and around a thousand books to read, the Kindle Kids Edition is good value. The interface hasn’t been changed much from the standard Kindle, but once your children know how to use it, they should be encouraged to read for hours and hours.

Having successfully cornered the kids’ tablet market with the Fire range, Amazon has decided to expand its focus by tailoring a Kindle for younger readers. It’s a wonder that it hasn’t done this before because it makes sense: a device that’s specifically for reading books means no distractions from games, other apps and the internet.

The bundle includes the 10th-gen Kindle – the one which now has a front light – a protective case and a two-year warranty that covers accidental damage, just like a Fire tablet Kids Edition.

You also get a year’s subscription to Fire For Kids Unlimited (FreeTime Unlimited in the US) which offers access to over a thousand books and – as of 5 December – one hundred audio books via Amazon’s Audible service. Since there’s no headphone jack, they’ll need a Bluetooth speaker or Bluetooth headphones to listen, though.

Given that the standard Kindle costs £79.99 / $109.99 if you opt for no lock screen offers, this makes the Kids Edition excellent value by comparison as by default it has no adverts.

As the Kindle itself is the same hardware you get if you buy the 10th-gen model, reviewed, there’s not a huge amount to say in terms of features and design, except that it’s not available in white. Just black.

It’s the latest evolution of the tried-and-trusted formula of a 6-inch e-ink screen that, if you haven’t already seen one, has the same sort of appearance and contrast as real paper, so it’s easy to see whether indoors or sat by the pool in the sun.

The built-in light means it remains easy to see in dim conditions, and so long as you don’t use it at maximum brightness all the time, the battery should last for a few weeks.

There’s enough storage for thousands of books and built-in Wi-Fi means you can browse the library and download books directly on the Kindle itself.

We expected the software to be redesigned for kids, but it has merely been tweaked a bit from the normal version. That means a home screen which helps them discover books more easily – via character and theme suggestions – and also a ‘fuzzy’ search that ensures they can find the books they want even if they can’t spell the title precisely.

Type Harry Potr, for example, and the J.K. Rowling books will appear in the list of results.

There’s also Word Wise (a feature that’s been on the Kindle since 2015) but which is appropriate here. Once enabled in the Reading Options menu, it will highlight difficult words so kids can tap on them to see a definition. They might need help pronouncing them correctly though as the Kindle can’t vocalise words.

Again, those familiar with the Kindle will already know about the built-in dictionary which means any word can be looked up. Long-press a word and it will be highlighted. A few seconds later the definition will appear in a box. Words are automatically added to the Vocabulary Builder, so kids or parents can review them and help their child learn the words, which can be removed from the list once they’re mastered.

However, it’s the gamification which is possibly the best addition. From the home screen, kids can tap on the Awards icon, then on Achievements to see what they have earned. There are various badges which light up when things such as the daily reading time goal has been met or a certain number of pages.

It’s a great idea and our eight-year-old tester loved the idea. However, she was disappointed that they didn’t appear while reading. Instead, you have to go and check manually to see if you have met the goal yet, or tap on the page number in the bottom left corner until it displays how long left until your reach your reading goal. Plus, the achievements simply turn from greyed-out to black, so the reality is much worse than the idea.

She did love the lock screen wallpapers which are displayed when you turn the Kindle off, however.

Compared to Amazon’s massive library of Kindle books you can buy, the selection available in Fire for Kids Unlimited is actually fairly limited. Yes, you can read all the Harry Potter books, plus The Princess Diaries, but when your first three searches for books you want to read come up empty, it’s quite disheartening.

Also, despite correctly setting up the child profile for an eight-year-old girl, too many of the suggested books were – as she put it – only interesting to boys.

Switching to an older child’s profile, the suggestions were significantly more attractive, and our 11-year-old immediately picked four books she wanted to read including Scarlet and Ivy, My Best Friend and Other Enemies and Pray for a Fire Drill.

She searched, and found no results, for Jacqueline Wilson, Roald Dahl and Jo Cotteril. On the fourth and final search a couple of David Walliams titles appeared, including Gansta Granny and Billionaire Boy.

Of course, for younger readers, it’s the discovery system they will use to find books to read rather than searching and so long as they are inclined to read, they will find at least a few things initially that pique their interest.

But there’s another problem here. The cover thumbnails are too small (and obviously in monochrome) so it’s difficult for them to read the title or really identify books or series by their cover art. Also, when you tap on a book the Kindle simply downloads it, where the child – and adult, to be fair – expects to be shown more information.

Really, it should let the child read a blurb so they can decide if the book is for them or not. Even with the book downloaded, you cannot read the back cover, where the blurb is usually located, and you’ll have to teach your child how to use the navigation mechanism to flip around the book beyond scrolling to the previous or next page.

It’s also worth noting that some kids books – especially those for younger children – are illustrated. This can mean that the text on every page is actually an image and therefore words cannot be selected and looked up, nor the font or size changed.

Fire for Kids – and Audible

If you happen to also own a Fire tablet, though, you can take advantage of the other stuff available in the Fire for Kids / FreeTime subscription such as apps, games and web videos.

One thing you might expect is to be able to listen to audiobooks via Audible on the Kindle Kids Edition. That feature has now been added in a software update which began rolling out on 5 December, but it wasn’t available at launch. The Fire for Kids subscription includes access to around 100 audiobooks including The Snow Queen, Aladdin and Other Stories, Grimm’s Fairy Stories, Peter Pan and more.

Thanks to the Amazon Parent Dashboard, you can add purchased Kindle books to your child’s account, and this can also be done from the Kindle itself. This means you can buy specific books for them without needing to allow them to use an adult’s account or have access to the full Kindle library.

The Dashboard also lets you keep an eye on reading activity, so you can see how much they have read, which books they’ve been reading and how much time they’ve spent on other activities (but only if they have a Fire tablet).

If you’d rather avoid buying a tablet for your child, but want them to read more, the Kindle Kids Edition might just do the job. The hardware itself is perhaps not perfectly suited to kids: it’s not quite as responsive as they will expect, but the screen is perfect for reading books.

The other issue – at least in the UK Fire for Kids subscription – is that there aren’t as many popular titles as our testers would have wanted, and our worry is that they’d have read everything they wanted to after a couple of months.