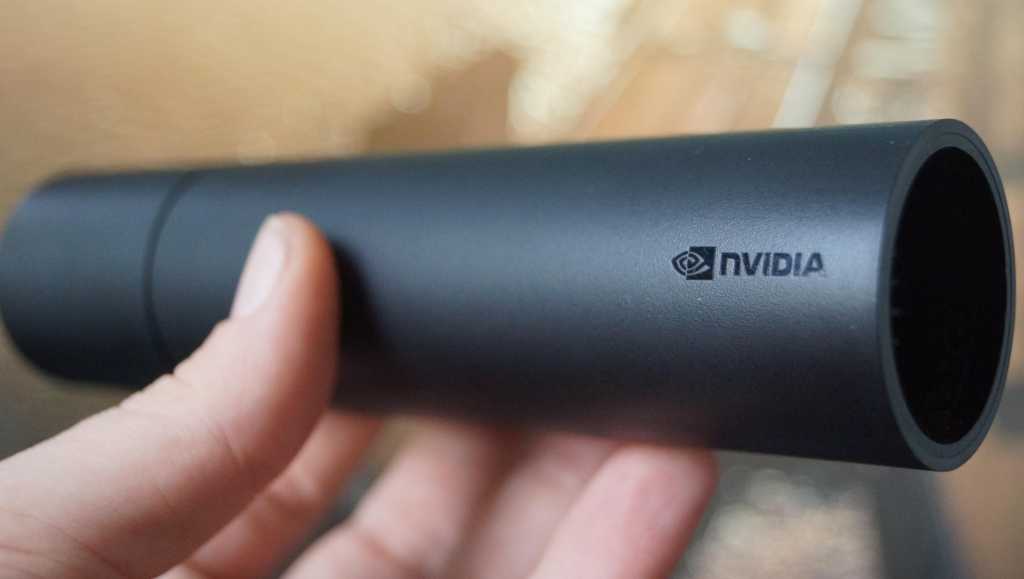 The Nvidia Shield TV offers the most complete media streamer experience on the market right now, complete with 4K HDR10 support alongside Dolby Atmos and Dolby Vision, AI-powered upscaling tech and all the Google smarts that come with Android TV. It’s expensive, but if you’ve got a high-end TV setup that can take advantage, this is the one to go for.

The Nvidia Shield TV has historically been a gaming-focused media streamer, but with the introduction of the new Shield TV, that has changed. While you’ve still got access to Android games and the cloud-based GeForce Now streaming service, the 2019 Shield TV is focused on streaming movies and TV shows – and it truly excels in doing so, offering one of the most complete audio-visual experiences available from any media streamer on the market right now.

Keep reading our review to find out why we’re so impressed with the Nvidia Shield TV.

The Nvidia Shield is available right now for £149/$149, a price reduction compared to the previous £179/$179 entry-level model, and it’s available to buy from Nvidia alongside third-party retailers like Newegg and Amazon.

That makes it cheaper than the Apple TV 4K with more features on offer, although it’s slightly more expensive than Amazon’s Fire TV Cube. Though it is a high price compared to a cheap Fire TV Stick, we think there’s more than enough on offer from the Shield TV to be worth the extra cash.

You can also pick up the Shield TV Pro for £199/$199, which offers more RAM and storage in the same form factor as the previous-gen Shield, and for more inspiration be sure to check out our list of the best media streamers.

A shift in focus

The new Nvidia Shield TV offers a complete overhaul compared to its predecessor, ditching the angular design for something more understated – and a bit bland, if we’re being honest. That’s because, unlike the eye-catching, LED-infused design of the previous Shield, the new Shield TV is intentionally designed to disappear.

It’s a lot smaller this time around, and you’ll find HDMI, Ethernet and MicroSD card slots ports hidden at either end of the tube, although you won’t find any USB ports to extend the functionality of the media streamer.

The redesign is in-line with the Shield TV’s shift away from gaming, with a new focus on media streaming. Don’t misunderstand us though; it’s still a gaming-capable streamer with the same access to Android games via the Google Play Store along with cloud-based gaming via Nvidia’s own GeForce Now streaming service, but enthusiast-level features, like the ability to stream to Twitch, are no longer available here.

Alongside the redesigned Shield TV, you’ll find a brand new remote that fixes just about every issue we had with the first-gen remote. The first thing you’ll notice is the size and general form factor; it’s chunky and triangular in shape. You might think that’s an odd choice for a remote, but surprisingly, it matches the curvature of your palm and fingers as it’s gripped.

The shape might be the most noticeable aspect of the new Shield TV remote, but it’s not the only change. There’s also a suite of media controls on the controller, allowing you to pause and fast-forward content quickly without having to use clunky on-screen controls. It’s admittedly a small addition, but one that makes a huge difference when binging series’ on Netflix.

You’ll also find a Quick Settings button that, as the name suggests, allows quick access to your most-used Settings. If that’s not something you’ll need very often, Nvidia also allows the ability to reprogram the button to a specific app or function.

With many more buttons now available, Nvidia knew it’d be a struggle to operate in the dark – and that’s why it features motion-activated button backlighting that makes it easier to see. There’s also a Lost Remote feature toggled via the Shield TV app for iOS and Android that makes the remote beep – something we’ve already used on multiple occasions.

Essentially, every aspect of the new Shield TV remote has been carefully considered by Nvidia. It’s an odd thing to say, but it really is an impressive remote.

The best streaming experience on the market

Under the hood of the Shield TV, you’ll find an upgraded 16nm Tegra 1X+ chipset alongside 2GB of RAM to power the 4K@60fps HDR experience, which Nvidia claims offers 25 percent better performance. It’s hard to benchmark those kinds of claims, but it’s safe to say we haven’t experienced any kind of lag during our time with the media streamer.

You’ll also find 8GB of built-in storage, which might not sound like much, but Nvidia claims it’s enough for 250 apps and is expandable via microSD if required.

The Shield TV uses a deep learning neural network to enhance the image in real-time, and it’s all done locally on the streamer. That’s a first for a media streamer, and it offers impressive results. It removes the softness on offer from the upscaling tech used by most media streamers and TVs, making details look sharper and clearer. It’s especially noticeable with animated series like Archer and Disenchantment, offering crisp, clear, defined lines.

It’s not going to replace native 4K content, of course, but for streaming services content is capped at 720p or 1080p, it’s a great improvement. It also allows you to enjoy series like Game of Thrones and The Walking Dead that aren’t usually streamed in 4K, and because the system is AI-based, the results should improve as time goes on.

The AI upscaling supports 360p, 480p, 720p and 1080p content at 30fps and is available in a variety of streaming apps like Netflix, Amazon Prime Video and YouTube. It even works with Kodi, improving the quality of your local library of video.

Aside from impressive 4K upscaling, the new Shield TV features both Dolby Vision and Atmos via Netflix and Amazon Prime Video – one of the most desired features of the media streamer. Dolby Vision and Dolby Atmos offer an incredible cinematic experience with enhanced detail and spatial audio, but you need a Vision and Atmos-supported TV and surround sound system to take advantage and they usually cost a pretty penny.

Those that want a more powerful streamer with the old-school design, 3GB of RAM and 16GB storage should consider the Shield TV Pro. It features twin USB ports, Smart Things Hub support and the ability to be used as a Plex media server. Oh, and you can even stream your gameplay to Twitch!

The Nvidia Shield TV features the latest version of Android TV, bringing with it all the bells and whistles of the Google-based operating system including Google Assistant. Using a microphone built into your remote, you can control smart home gadgets, get answers to queries, get information to the weather and just about anything else you’d get Google Assistant to do on your smartphone.

You’ve also got access to thousands of apps via the Google Play Store, including many of the most popular streaming services in the UK. You’ll find Netflix, Amazon Prime Video, BBC iPlayer, ITV Hub and My5 in the UK, and while it’s missing All4 and UKTV Play, you can always use the built-in Chromecast support to mirror it from the app on your smartphone.

While Google Assistant is the go-to virtual assistant when it comes to the Shield TV, Nvidia is currently working on an Alexa skill that’ll let you control many aspects of the media streamer with Amazon’s virtual assistant. It’s not something we were able to use during testing, but Nvidia claims you’ll be able to turn it on and off, open apps and more using Alexa.

The best part is that Nvidia tends to update the entire Shield TV collection with new features every now and again, so the Shield TV should keep improving over time.

The Nvidia Shield TV offers one of the best media streaming experiences on the market right now, there’s no doubt about it. The cylindrical body and triangular remote are a step away from the gaming-focused Shield that came before it, but we think it’s a welcome change. You’ve still got access to Android games and Nvidia’s cloud-based GeForce Now streaming service, so it still appeals to gamers, although the lack of USB ports may put some enthusiasts off.

But it’s the viewing experience where the Shield TV truly excels; it offers 4K@60Hz playback with HDR10 support, just like its predecessors, along with 4K AI upscaling truly makes the enhances the visual experience for 4K TV owners. It’s far superior to any other 4K upscaling tech we’ve seen, adding more detail to 360p, 480p, 720p and 1080p content. While it’s not as good as native 4K content, it’s as close to it that we’ve seen.

Android TV underpins the entire experience, offering a suite of apps and games for users to download, along with a content-focused Home menu and hands-free access to Google Assistant.

If you’re looking for a premium media streaming experience, the Shield TV really is the one to go for.