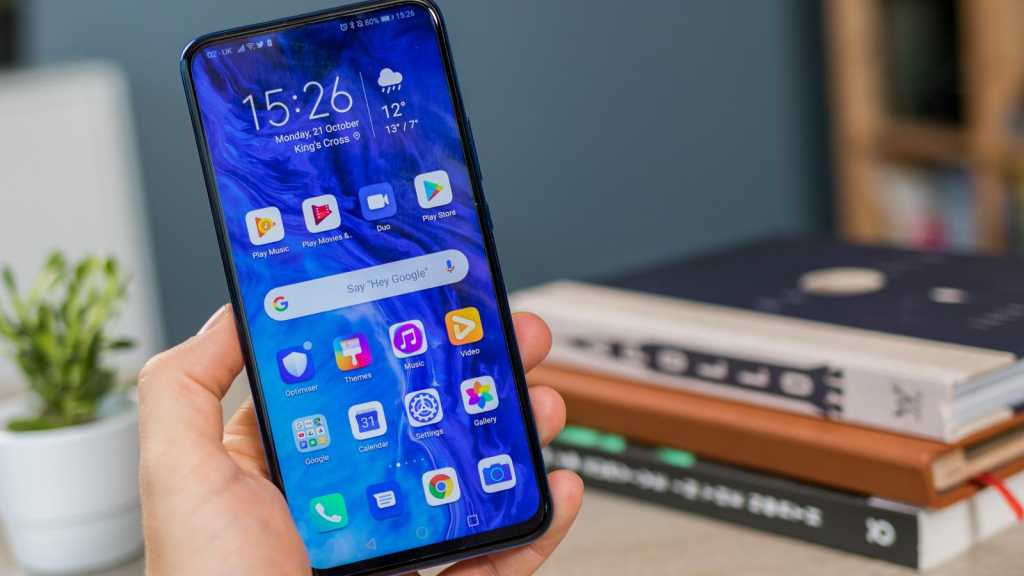 Honor has a record of producing phones that look like flagships, but are actually less than half the price, and the 9X is no exception. With no notch or bezels it delivers a massive full-screen experience, while the back of the phone is equally striking. The triple lens camera promises a lot on paper, but not everything is a winner – the night mode in particular is not very impressive. However, the price still makes this phone a contender.

Honor have yet again managed to produce a mid-range phone with a high-end feel in the 9X. The camera on this phone manages to match some of the specs that we’d see on other flagships, with a stand-out (and notch free) design that will catch anyone’s eye.

The phone doesn’t quite stack up to all flagship levels, but at this price it’s still quite a steal. Read on to find a further opinion on the specs, camera, battery and more.

The Honor 9X is available for £249.99/approx $320 in the UK. Considering some of the specs and features on this phone, that’s quite a deal.

You can get the Honor 9X  SIM-free from Carphone Warehouse, and Amazon UK will also stock the handset. Alternatively you can pick it up on contract from online retailers such as mobiles.co.uk and mobilephonesdirect.co.uk from £12.50 per month (£29.00 before cashback).

Honor don’t typically sell their phones in the US, so we don’t imagine to see it in US stores anytime soon. However, US readers can still get it imported from the likes of geekbuying.com for as little as $239.99.

If you’re interested in the rest of Honor’s lineup, take a look at our guide to the best Honor phones, or check out some of the other mid-range phones on the market around the same price.

Let’s be frank, the 9X is a pretty phone. At first glance you could mistake this handset for a flagship, as it looks and feels expensive with its dual 3D curved panel with a 8.8mm thick frame, an impressive 6.59in Full-HD+ LCD display and optically-pleasing glass back designed to mimic the appearance of diamonds.

The only thing that compromised the display on the 8X was the notch, something the 9X has done away with completely by making the selfie camera a motorised pop-up, similar to what is seen on the Xiaomi Mi 9T and OnePlus 7 Pro.

This is a big phone (163.1×77.2×8.8 mm to be exact), something quite characteristic for Honor. Whilst this is great for watching shows, I found it to be impractical for everyday use. I personally couldn’t reach the top of the phone one-handed, and it didn’t fit snugly in a pocket when moving out and about. Obviously this can come down to personal preference (you may be blessed with bigger hands than mine), but it’s something to be aware of if you’re looking at the 9X.

The back of the phone features a ‘Dynamic X Design’, with reflective geometric diamond-cut tiles. On the Sapphire Blue version that I tested, this exterior is extremely striking and really gives the phone a high-end feel, capturing different shades of blue as you move it.

Of course, having a glass back does mean that it smudges extremely easily. Even the slightest touch leaves your grubby fingerprints all over, a real shame considering how stunning the rear is. You still get the shimmer obviously, but the overall effect looks best untouched, so we’d recommend using a case if this a bother – Honor includes a transparent one with the phone.

This model has also finally moved to USB-C – keeping up with the times – but does keep the 3.5mm headphone jack.

Running on Huawei’s Kirin 710 processor the phone is reasonably responsive during most everyday tasks. There are a few apps that occasionally lagged or bugged, but nothing that became a major annoyance.

That’s something that’s not really reflected in our benchmark results, where the 9X tended to score lower than last year’s 8X. However, as stated above it’s still fairly fast during actual use, but if you’re wanting to get granular then it is something to keep in mind.

When you look at the results, we see it sits with the likes of the Pixel 3A and Nokia 7.2, which considering the price point and capabilities make it quite a good contender for the mid-range market. Take a look at our full testing results below:

The 9X makes impressive use of the new FullView 6.59in Display, with Honor’s largest display on a phone yet with a 91% screen-to-body ratio. Doing away with the notch has really opened up the screen entirely, and just gives an overall cleaner experience. It’s bright enough to hold up even under strong sunlight – I was still able to navigate easily and see the text without any strain.

It is worth noting that this screen is LCD, not OLED, which means that power consumption in theory isn’t as good if it had the latter. Personally I found the colour quality to be dynamic and contrast pretty decent, even in low light.

With the inclusion of a HiAce algorithm to enhance HD video, the phone displays media to its full capacity, meaning that you could happily sit and watch Netflix on your commute home without feeling like you’re squinting to see the details. Admittedly, there isn’t actually an option to turn this off, so I can’t tell how much of a difference this feature is having on overall video quality, but it seemed pretty good to me.

I’m also a massive fan of the inclusion of the blue-light filter, which you can either schedule or turn on full time. There’s also a slider to choose how warm or cool you’d like the screen to appear. The 9X goes quite orange in full warm mode, which is handy to use of a night to keep your screen less harsh. If that’s not your thing, you can also change the screen to a specific colour mode and temperature, should you want another level of customisation.

The biggest upgrade to the 9X is in the camera, which comes equipped with a camera that has has three lenses: a main 48Mp lens with a f/1.8 aperture and ½-inch sensor – along with the inclusion of an 8Mp 120° wide-angle lens, great for getting in those extra details, and a 2Mp depth assist lens for any portrait shots.

Colours on the main camera turned out bright and crisp, capturing smaller details really well even when zoomed in. You did lose this a little bit when in wide-angle mode, but that’s to be expected really. I was also a fan of the aperture mode – which allows you to change the focus on the image to where you want, great when trying to capture specific objects. However, this is actually a different mode to portrait, so it would be easier for future models to integrate the two.

The 9X doesn’t have the same sensor as what you would see on flagships, which means that the internal processor just won’t produce the same quality pictures on this phone. Nonetheless, you’d need a good eye to see the minute differences.

Honor has made a fuss about the night mode on the camera, but I didn’t have a great user experience with this. The phone can’t seem to handle any form of instability without blurring the quality of the picture, and even when it does manage to work the end result is over-exposed – as if you’d manually edited a photo from a standard camera.

Interestingly, although the pop-up selfie camera is 16Mp like its predecessor, it doesn’t feature HDR. This is particularly noticeable in bright-daylight, as the colours look washed out and muted, as if they’ve been filtered (spoiler, they haven’t). Otherwise though it does capture textures and other details quite clearly.

You don’t need to worry about damaging the pop-up lens at least, as the camera can auto-detect drops and will retract before it hits the ground. However, the motorisation is a little slow, so you can’t take a hurried selfie should the need arise.

Video is also something that Honor have chosen not to focus on with the 9X, keeping the same 1080p@30fps as seen on the 8X. More than that obviously isn’t a must-have for all phone-users, and something that you wouldn’t expect on a phone of this price, but it would have been nice to have.

Remember that 4,000mAh battery we mentioned before? Well surprisingly this didn’t hold up under our internal tests, only managing to last 6 hours and 52 minutes from full charge to flat. It ships with a 10W charger, which managed to top up 29% in 30 minutes whilst turned off, taking a few hours to be fully juiced.

Though this phone didn’t perform well in our benchmark testing, it still managed to last a day and a half under actual use, which is what really matters. The battery-saving mode definitely slowed things down and eked out a little more time. There’s also an ‘ultra power saving mode’ which I tried when I was in the dreaded below 10% zone, but to be honest, it didn’t make much of a difference.

Despite being released just after the Android 10 launch, this phone doesn’t come with the new OS. Instead, the 9X has Android 9 running through EMUI 9.1. In the past, Huawei phones have been criticised for having a clunky OS, but I mostly found it easy to navigate.

What I will say is that this phone boasts some extra features that don’t quite work as expected. For example, the security section has the option of certain motion controls – including a one-handed mode – which I couldn’t make work no matter how hard I tried. This could be an issue with the phone, or with me being misdirected. Either way, this feature should have either been made clearer and easier to use.

Another feature ditched from the previous iteration is the facial-recognition software – which is either a blessing or a curse depending on how mistrusting you are of the data overlords potentially spying on you (guess what my view is). You still get the fingerprint sensor of course, and other emergency and security features to keep your device secure.

Android 9 puts a big focus on digital wellbeing, and EMUI 9.1 has something similar. The digital balance feature records how much time you’ve spent on individual apps, your screen time and unlock time. You can also set parental controls for screen time, which will block a child from manually adjusting them.

Thankfully, this Honor phone has also managed to cling on to Google apps and the Play Store – but we’ll see what happens with future models. There are also equivalents to most of the Google-owned products, but they just don’t perform as seamlessly.

If we’re focusing on just the design and main camera, the 9X certainly delivers. The aesthetic is fantastic, the camera quality in daylight use is rather impressive and the notch-free display gives a bright and clean finish to the phone, making it a great media companion for videos, apps and games. The battery is also pretty decent, meaning that you won’t need to worry if you’re away from your charger for a night.

There are of course a few niggles. The night mode doesn’t produce great images and is generally hard to use, and some of the apps don’t quite work as directed and ideally need some tweaking. It also doesn’t charge quite as fast as some other phones can, and although it mimics some flagship features, it would be a lie to say that it’s an exact match.

But taking into account what you’re getting for your money, these low points don’t spoil what is a decent mid-range phone.