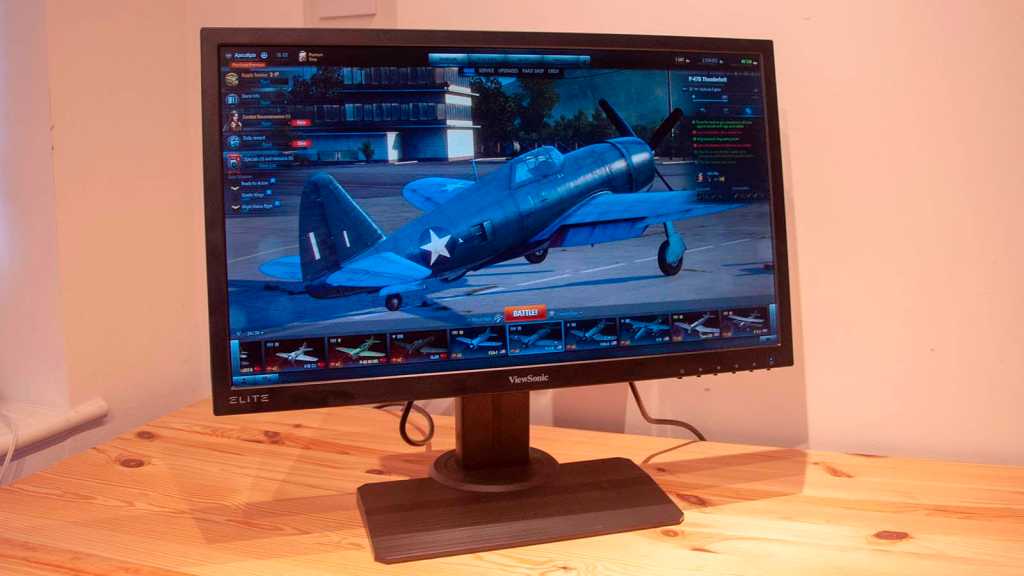 With both official FreeSync and unofficial G-Sync at 144Hz, the XG240R gives scope for medium powered GPUs to deliver smooth and high framerates without choppiness. It also has a solid design and drags more colours out of a TN panel than expected.  It lacks HDR and has weedy speakers, but nothing is perfect.

We’re living in interesting times, where the advent of cryptocurrency mining has turned the GPU market on its head. The resulting high price of latest generation video cards has made gamers think hard about what investments to make on their computers that return the greatest impact.

If a new graphics card is out of the question, maybe making the video card you already own produce higher quality output is a good alternative?

The new ViewSonic Elite XG240R gaming monitor taps directly into that mindset by enabling variable sync gaming on many discrete video cards that gamers already own, and delivering a fluid and colourful experience.

The price range of FreeSync 24-inch panels is huge, and the ViewSonic Elite XG240R falls somewhere in the middle with an MSRP of £269 or $259. We noticed that on Amazon US, it is available for only $233, a price that’s a bargain.

Check out our round-up of the best gaming monitors.

ViewSonic grades its panels using the first two letters to designate the series, and all XG coded parts are Gaming Series screens, made for ‘Enthusiasts, Diehards & Pros’ as ViewSonic defines them.

And, the very first rung on the XG ladder is the Elite XG240R, a flat 24in 1080p TN technology display with a fully adjustable support stand, mood lighting and variable sync via FreeSync and G-Sync technology.

When we assembled the XG240R out of its box, the first aspect that impressed us was the stand. At its core, this support is a metal box section encased in plastic and provides a very solid platform for the panel via an unobtrusive rectangular foot.

The available movement includes 12cm of vertical travel, 45 degrees of swivel, 5 degrees of forward tilt and 20 backwards. And, the amount of vertical movement is enough to allow 90 degrees of twist, enabling the screen to be used vertically in portrait mode. If you choose this to be the normal orientation, you can also change the OSD menus to be orientated to match.

Our only reservations about portrait mode are that the vertical viewing angle is only 160 degrees, and when this is rotated it would be more challenging to see the screen clearly from the side. And, the frame isn’t so thin that using three or more of these to create a panoramic would be seamless.

On some hardware, this type of support is a custom part physically integrated into the panel, but here you can remove it, and access VESA 100 holes to use any other compatible mounting if required. Overall, this monitor is more robust than we’ve come to expect from gaming orientated products and should see many long years of service for most owners.

Until recently FreeSync capable screens were derided by many because they wouldn’t work with Nvidia graphics cards to deliver variable sync, only AMD GPUs. This divide existed despite Nvidia using almost identical technology to FreeSync on its mobile platforms as if to underline that it was also technically possible on its discrete video cards.

Thankfully, all that has changed earlier in 2019. And, while this monitor is sold as FreeSync compatible, we discovered that with this feature activated through the OSD, it was possible to turn G-Sync on in the Nvidia control panel for our GTX 1060 video card on the test system.

This change isn’t an accident. Nvidia finally threw in the G-Sync towel in January, ending a very long and pointless exercise were its customers became collateral damage in its ambitions to dominate variable sync displays.

The imitations of this feature in this design are, as with official G-Sync displays, that you must use the DisplayPort input for it to be operational. Having this feature is amazing, and enhances the gaming experience for those that have an Nvidia GPU with G-Sync mode.

What impressed us much less was the tiny 2W speakers that ViewSonic engineers smuggled inside the XG240R. Most gamers will have speakers or headphones, enabling them to avoid the thin and overly trill sounds that these make. You won’t want to rely on these anyway.

Another feature that we questioned was the dynamic light show that comes with the XG240R via LED panels.

On the back of the case are two elongated chevrons that are backlit with RGB controllable LEDs, allowing them to be a wide range of colours, gradients and brightness. But what is very odd about this feature is the implementation, it uses USB from the computer to control the lights, and without the USB cable connected there are no party illuminations.

In addition to controlling the lights, the USB cable also provides two Type-A USB 3.0 ports via a hub, so it cleverly reuses this communication pathway for something all customers will appreciate.

ViewSonic can’t entirely take all the glory for this, because the lighting technology is a cooperative venture with other hardware makers, including CoolerMaster, Razor and Thermaltake. Each has custom software that you can download that the XG240R is supposedly compatible.

The thinking here that you can colour coordinate your fans, case, PSU and now, Elite Series monitors. But the software does much more than define colour or cycling sequences, it can even sync changes with other apps and devices.

As wonderful as this all sounds, the software from some vendors isn’t that stable and won’t warn you if the feature is disabled in the firmware. Thermaltake’s, for example, comes up with an error because it can’t find an LED fan that the software assumes you should have.

But the biggest issue and one that we’ve wrestled with on other gaming displays are that sat in front of the monitor you can’t see the cycling of RGB LEDs. As they are on the back and out of sight, unless they’re reflected off a mirror or close wall. If you like the idea of others seeing the pretty coloured lights on the back that’s fine, but for a gamer using the monitor, this all seems somewhat moot.

But don’t be distracted by the flashing lights, because the best aspects of this design are in the panel, and how it stretches what we’ve come to expect from TN technology.

Our Datacolor Spyder analysis of it reveals that this is a TN screen with a colour gamut of 99% sRGB. That it only manages 78% Adobe RGB means that it won’t be finding a use for those that work professionally with colour, but it has a bright saturated palette that’s perfect for gaming.

The distribution of light is marginally greater at the centre, but not so much that without a calibration gadget that you would be able to detect it. Colour uniformity is even better than luminosity, and generally within a 3% range across the panel.

In short, the colour accuracy, contrast, uniformity and brightness of this design are very good, bordering on excellent – especially for an affordable monitor.

Let’s talk first about where this design might have been better.

The button selections on the OSD seem very kludgy when compared with a design that uses a joystick. Buttons are less intuitive, and it takes longer to get to the deeper parts of the menus. The menu needs a usability rework we’d suggest because the seven button clicks needed to adjust brightness is a tedious exercise in the extreme.

Where we liked the support arm and its range of motion, that it doesn’t have any cable management is a little disappointing. With the potential for up to eight cables running to this screen, some system, even slots to put tie wraps through, would have been better than nothing.

Minor points aside, this is an excellent option for those that aren’t looking for silly frame rates and extreme resolutions. If you have a GeForce GTX 1050, GTX 1060 or similar spec GPU, like many according to the statistics of Steam, then this screen is exactly what you want.

Our final caveat is that 24in isn’t as big as it once was, and many gamers are gravitating towards 27- or even 32in panels. ViewSonic has the cheaper VX3211, a 1080p 32in display. Although that screen only goes up to 65Hz and doesn’t have an adjustable stand.

If you want 144Hz at a bigger screen size than this, you will normally pay more than the asking price here. The only brand we’ve seen consistently cheaper is AOC, and it’s AOC C27G1 27in curved panel.

Unless you specifically want an HDR IPS-based panel, or something bigger, the XG240R delivers a solid gaming experience on a wide range of possible PC specifications, and it won’t break the bank to own one.