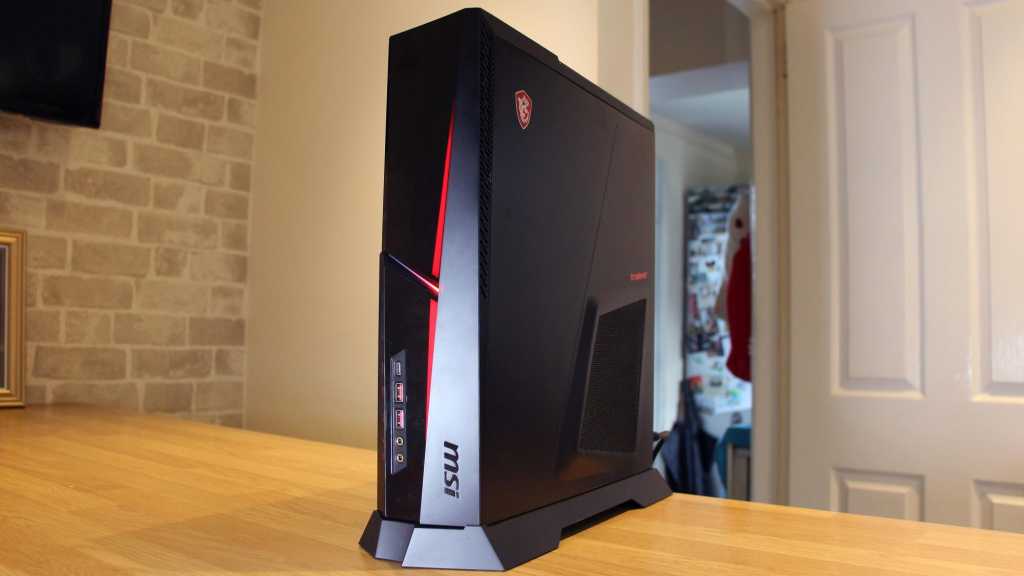 The MSI Trident A serves up solid gaming power inside a great case that keeps things neat, accessible and quiet. It’s a little expensive when compared to conventional towers but this balances space and specs with very few drawbacks.

This is the ninth iteration of Trident desktop from MSI, and the game-focussed brand has done a solid job of carving a niche for these small, tempting gaming desktops. There’s plenty to like about this eye-catching PC, but this big-brand machine also faces several challenges.

Other models are available, although they’re not always called the Trident A – the Trident X branding is used for beefier machines with RTX 2070, RTX 2080 and RTX 2080 Ti graphics cards, more powerful processors and RGB LED CPU coolers.

Check out our  best gaming PC chart for some more options.

The MSI Trident A 9th-gen is consistently impressive. The dimensions are a good starting point: this rig is just 130mm wide and 396mm tall, which makes it about half the size of a conventional tower. That makes this machine easier to stow into smaller spaces under desks and in cramped bedrooms – and easier to take to LAN events.

The top has slatted vents, the front has glossy plastic with red lights and there’s a flared base. Connectivity is solid: at the front you get a full-size USB 3.1 port and a Type-C connection, too. At the rear there are four more USB 3.1 ports.

The internals are divided into two halves – a necessary move to cram the hardware inside this machine.

On one side you get the motherboard, processor, memory, storage and power supply. The mini-ITX motherboard sits at the bottom with two storage bays above, and the cables are extremely neat – so the memory, M.2 SSD and storage bays are all accessible.

Of course, the mini-ITX motherboard means you don’t get spare memory slots or PCI sockets, but it’s still rare to see a system like this with such accessible components.

The smart design continues on the other side. A cutaway section reveals the back of the motherboard, which has a spare M.2 connector. Another cutaway allows air to reach the PSU and the top half of this side is given over to graphics card installation.

GPUs are installed using a riser that connects to the motherboard, which makes the graphics card easy to remove. There’s more space for longer GPUs, too, although no second power connector is supplied. You’ll be able to upgrade to an RTX 2060 Super, but nothing beyond that.

The MSI is half the size and twice as impressive as one of its key rivals – the Asus ROG Strix GL10CS. That machine is cheaper, and it shows: it has fewer USB ports, an untidy interior and less space for storage.

However, for the MSI’s price – or for a little more – you could buy a machine like the PC Specialist Vulcan S2. A larger ATX machine like that serves up more storage space, more extensive cooling and the ability to add extra memory and beefier graphics cards.

Not everyone is bothered about upgrading parts or getting inside their PC, and not everyone wants a full-size tower – if that’s you, the Trident A fits the bill.

Our only question mark concerns build quality. The MSI’s internal metal skeleton is rock-solid, but the front and side panels are flimsy. We’d be comfortable taking this machine outside, but be prepared for occasional scuff or scratch.

The Trident A 9th-gen’s key gaming component is the Nvidia GeForce RTX 2060. Naturally, the card is an MSI-made Ventus model – which means it’s got large fans and a small overclock, with the GPU’s original boost pace of 1,680MHz improved to 1,710MHz.

Elsewhere, the RTX 2060’s specification is solid with 1,920 stream processors, 30 Ray-Tracing cores and 6GB of memory.
It’s streets ahead of the GTX 1660 Ti you’ll find in cheaper machines, like the Asus – that card has no Ray-Tracing, and 1,536 stream processors.

However, big-brand lead times mean that the RTX 2060 isn’t the best graphics option now available. It’s recently been replaced by the RTX 2060 Super, which adds 2GB of memory, 256 stream processors and four Ray-Tracing cores. In the UK and the US, full-size PCs with the RTX 2060 Super can be had for the same price as the MSI Trident A.

And, if you’re willing to stretch your budget by a few hundred pounds or dollars, you can get a PC with the RTX 2070 Super – which wades in with 2,560 stream processors. That card is currently included in our award-winning PC Specialist Vulcan S2, which costs £1,600, and it’s possible to find PCs with that GPU for a little less.

Still, the RTX 2060 remains good – as benchmarks demonstrate. It rattled through Warhammer II, Ghost Recon and Deus Ex at 1080p with averages between 58fps and 82fps, and at 1440p it ran between 46fps and 57fps.

Nvidia’s card will play any esports game at more than 100fps, which means they’ll run smoothly on high refresh-rate panels. It’ll also just about manage widescreens with lower resolutions. However, the RTX 2060 isn’t powerful enough for 4K gaming, and it won’t run tough single-player games at 100fps unless graphics settings are reduced. You’ll need more grunt for VR, too.

Check out the scores below compared with machines including the  Overclockers Hoplite (RTX 2060) and  Yoyotech Warbird i7s (RTX 2070) as well as the PC Specialist and Asus ROG machines we’ve mentioned.

It’s a good turn of pace, but the RTX 2060 Super is quicker with around five-frames extra in Warhammer II. The RTX 2070 Super, if you can stretch to that, is around fifteen frames quicker still in Warhammer. The RTX 2060 Super offers more future headroom and smoother gaming now, while the RTX 2070 Super is essential for VR, widescreen and light 4K gaming.

Its Geekbench score of 18,750 beat the 17,065 scored by the cheaper Asus – that machine had memory that isn’t dual-channel and The MSI is a little faster in PC Mark 10, too.

However, a Core i7-9700 will score around 27,308 in the same test, which means it’s better for productivity tasks – and that chip is included in the PC Specialist. Pricier machines with AMD Ryzen 7 parts will score around 34,000 points, which makes them even better for work – but they offer no significant advantage in gaming.

Despite this, the Core i5-9400F is solid. It won’t cause 1080p or 1440p gaming bottlenecks, and it has enough power for day-to-day computing – web browsers, Office apps and photo-editing tools will run smoothly.

The rest of the specification is good, too: the memory allocation is fine at 16GB and the SSD’s speeds of 3,552MB/s and 1,530MB/s are excellent and ensure rapid loading and boot times. Wi-Fi is also included.

This rig is a great thermal performer, too, especially considering its compact size. Temperatures are fine and noise levels are consistently low. Fan noise is certainly present, but it’s easy to mask the audio by using speakers or a headset. If the MSI is beneath your desk you’ll be hard-pressed to hear it.

The MSI Trident A is an impressively balanced gaming PC.

The RTX 2060 graphics card offers solid pace for almost any 1080p or 1440p gaming situation, the Core i5 CPU is decent, and the memory and storage allocations are good. The case is great: it’s small, well-designed and keeps the internals quiet.

There’s more speed and refinement here than on cheaper full-size towers. Pricier PCs do offer more power and versatility, but at the expense of size – and often noise.

MSI’s machine isn’t perfect, though. Build quality is a little suspect in places and better graphics cards can be found for this price elsewhere, albeit in conventional ATX machines. The RTX 2060 can also be found for less inside larger towers.

It doesn’t have the best graphical bang-per-buck, then, but that’s no surprise – it’s the added cost of miniaturisation. However, if you’re looking for a small gaming PC for esports, 1080p titles or 1440p action, the MSI is the best example on the market.