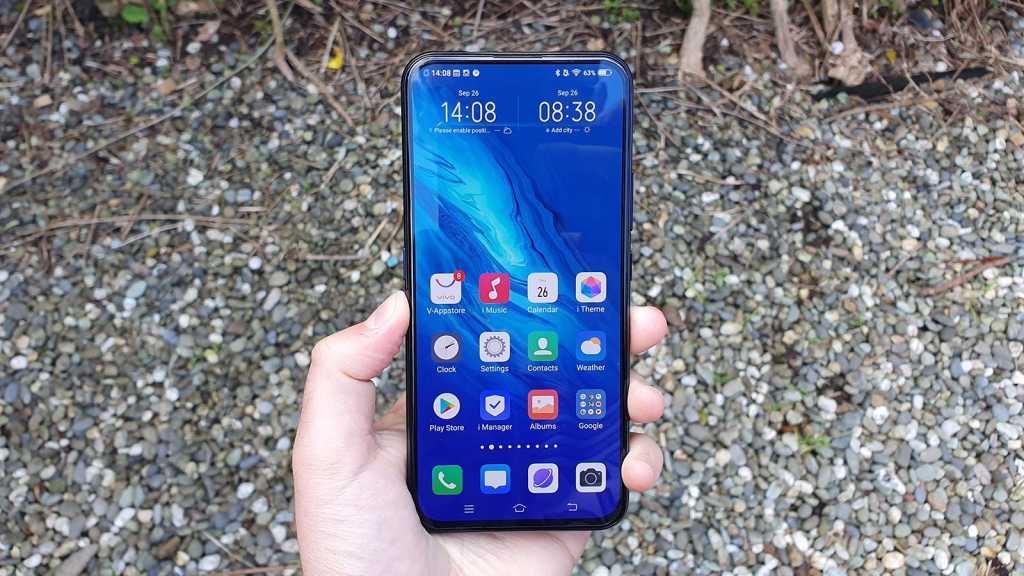 Even though it’s well priced and has six versatile cameras, the Vivo V17 Pro is very much geared towards the Chinese market. Its software is a high learning curve for western tastes and tries far too hard to be like iOS, making the phone feel less flexible than Android should. Its six versatile cameras are its saving grace, even if they are not class-leading.

Vivo has not officially made its way into the European smartphone market yet unlike fellow Chinese manufacturers OnePlus, Oppo, Huawei and Xiaomi. But that doesn’t mean you should avert your phone-buying gaze from Vivo phones.

The V17 Pro is an interesting mid-range option at the business end of 2019. It has premium features like a pop-up selfie camera, bezel-less display, in-screen fingerprint sensor and four rear cameras but sells for around half the price of default flagship phones like the iPhone 11, Samsung Galaxy S10 or the OnePlus 7T Pro.

This is a phone with some annoying quirks but if you want value for money and aren’t afraid of importing your tech then the V17 Pro is worth your consideration. Just bear in mind that there are better phones out there for around the same price.

This puts the phone in direct competition with the  £399/$399 Pixel 3a which is a better buy for most people. Google will give you a semblance of post-purchase support and the 3a has one of the best cameras on a smartphone ever. If you import a Vivo phone to the west, that becomes the wild west in terms of customer support – you’re on your own.

It’s also hard to justify buying over the exceptionally priced  circa-£350 Redmi K20 Pro that has better specs and build quality all round. The Oppo Reno 2 Z has also just been announced for £329 in the UK, making it strong competition against importing a Vivo phone. 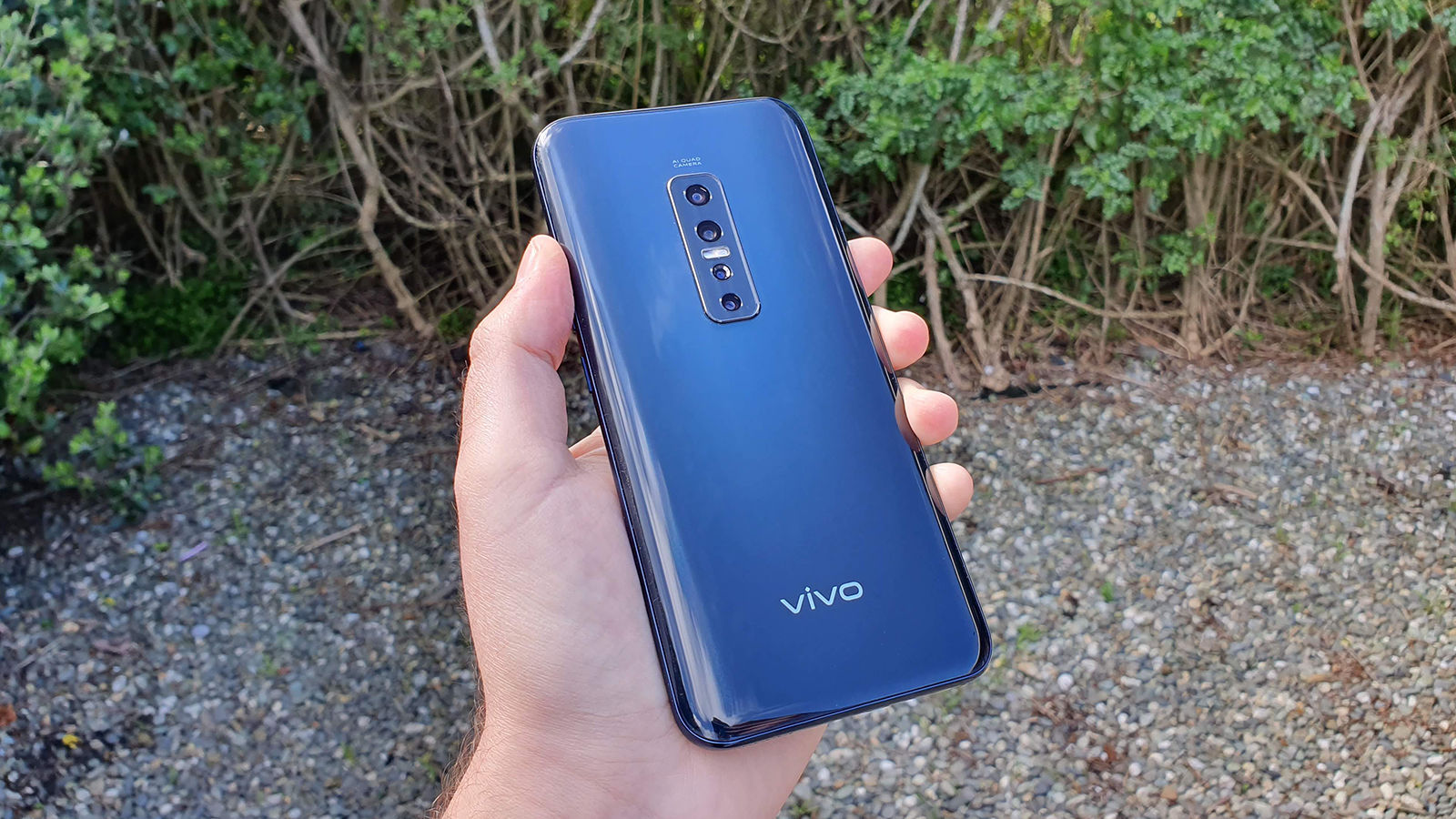 If 2019 had a smartphone trend, it probably be pop-up cameras. Or quad-rear camera. Or in-screen fingerprint sensors. If you can’t decide which is more important to have, fear not as the V17 Pro has them all. In smartphone terms, ‘pro’ doesn’t mean professional, it means ‘has more features’ or ‘is a bit better’.

The phone itself is a bit of a chonker, which is 2019-speak for thick and heavy. There’s nothing wrong with that per se but the phone is a far cry from the svelte Galaxy S10 or OnePlus 7T and is more akin to the Oppo Reno 10x Zoom, weighing a hefty 202g.

The main event here is the six-camera packed into the phone, with four on the back and two in the pop-up for selfies. Those two 32Mp f/2.0 wide and 2Mp f/2.4 lenses give you the option for wide-angle selfies and some bokeh blur effects. 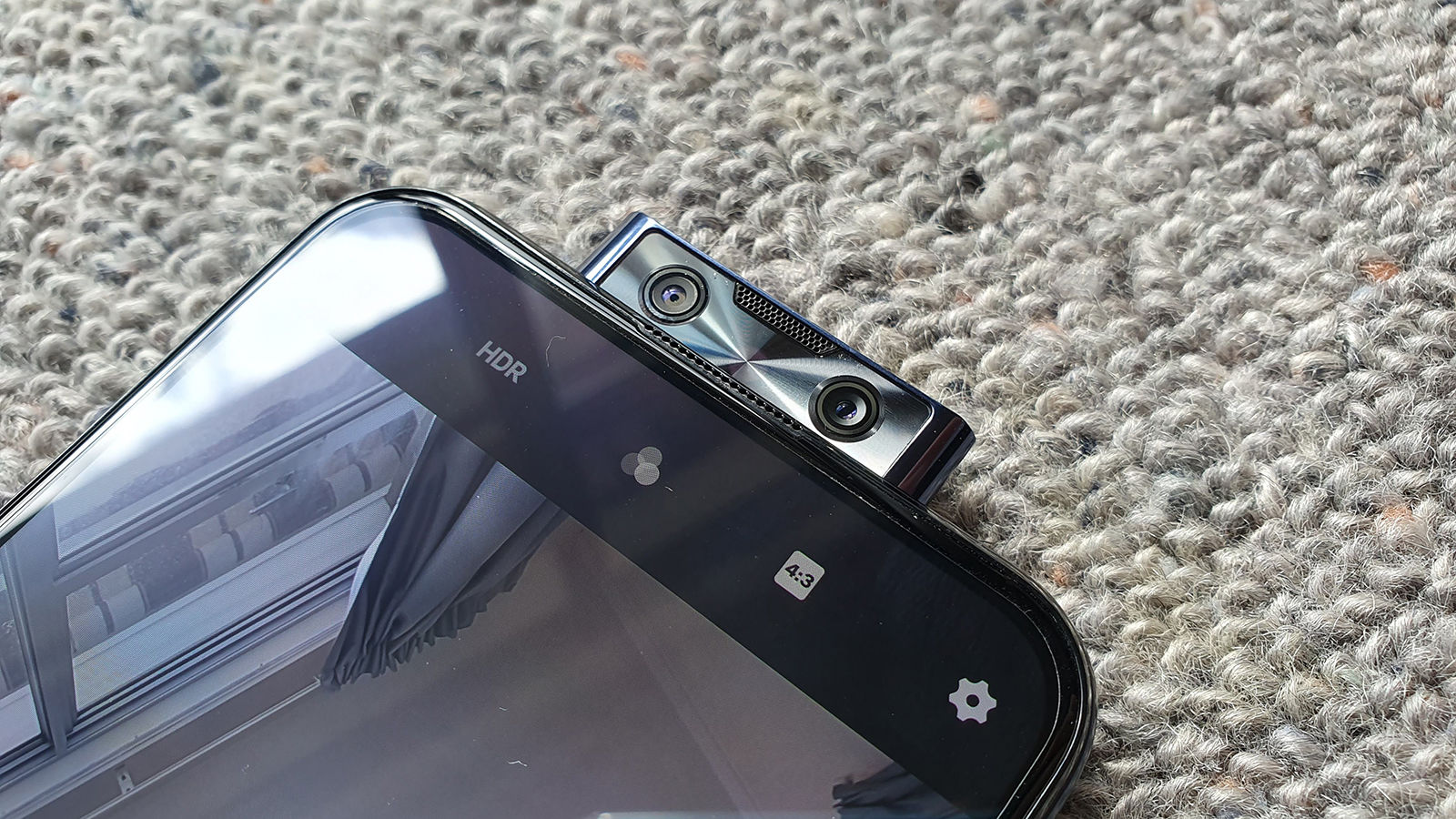 It means that the best part of this phone by far is the versatile photography setup. Four sensors on the back gives you a 48Mp f/1.8 main, 8Mp f/2.2 ultrawide, 13Mp telephoto and 2Mp f/2.4 depth sensor. It means you can be very adaptable depending on your subject, with 2x optical and 10x digital zoom. Vivo’s camera app is clean and simple to use but is an obvious rip off of the iPhone’s.

For a phone of this price it’s good to see camera features like this and the quad-cameras’ super-macro mode similar to that found on the OnePlus 7T. Results are great, even if there is a tiny bit of smoothing where the lens can’t cope. Experiment and you’ll get awesome results. Portraits of people on front and back cameras are acceptable so long as you disable the incredibly annoying beauty modes that are on by default.

There are some quirks though – if you want to take 48Mp shots then you must go to a specific mode, and there are odd options like gender detection hidden in the menus. 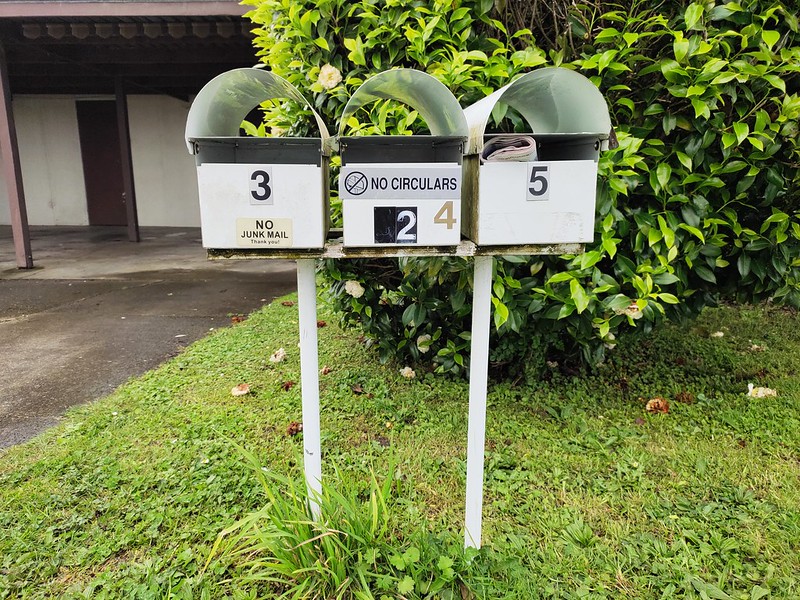 Aside from the pretty-decent-for-the-money cameras the V17 Pro has up to date specs. The power-efficient Snapdragon 675 chipset means the battery life for the 4,100mAh cell is on point – this is easily a two-day phone with general use, which we loved while using it. It thankfully has USB-C fast charging too, with the 18W charger doing a stellar job of topping it up fast.

Apps zip along at a great pace with 8GB RAM and 128GB storage being generous for the price. The display is a 6.44in OLED 1080p 20:9 panel with good brightness that, you guessed it, is good for the price. There are better, more vibrant OLEDs out there, but you’d have to spend more on something like a OnePlus 7T with its superior 90Hz refresh rate instead of the standard 60Hz to notice much of a difference.

The in-screen fingerprint sensor is great. It works reliably every time and I can confidently say it’s better than the one found in the Galaxy S10. It shouldn’t come as a surprise as Vivo was the first manufacturer to ship a phone with the technology, so it’s at the bleeding edge. You can also use the front facing cameras for 2D face unlock but the cameras have to pop up every time which I found annoying, as I have on other phones with pop up cameras. 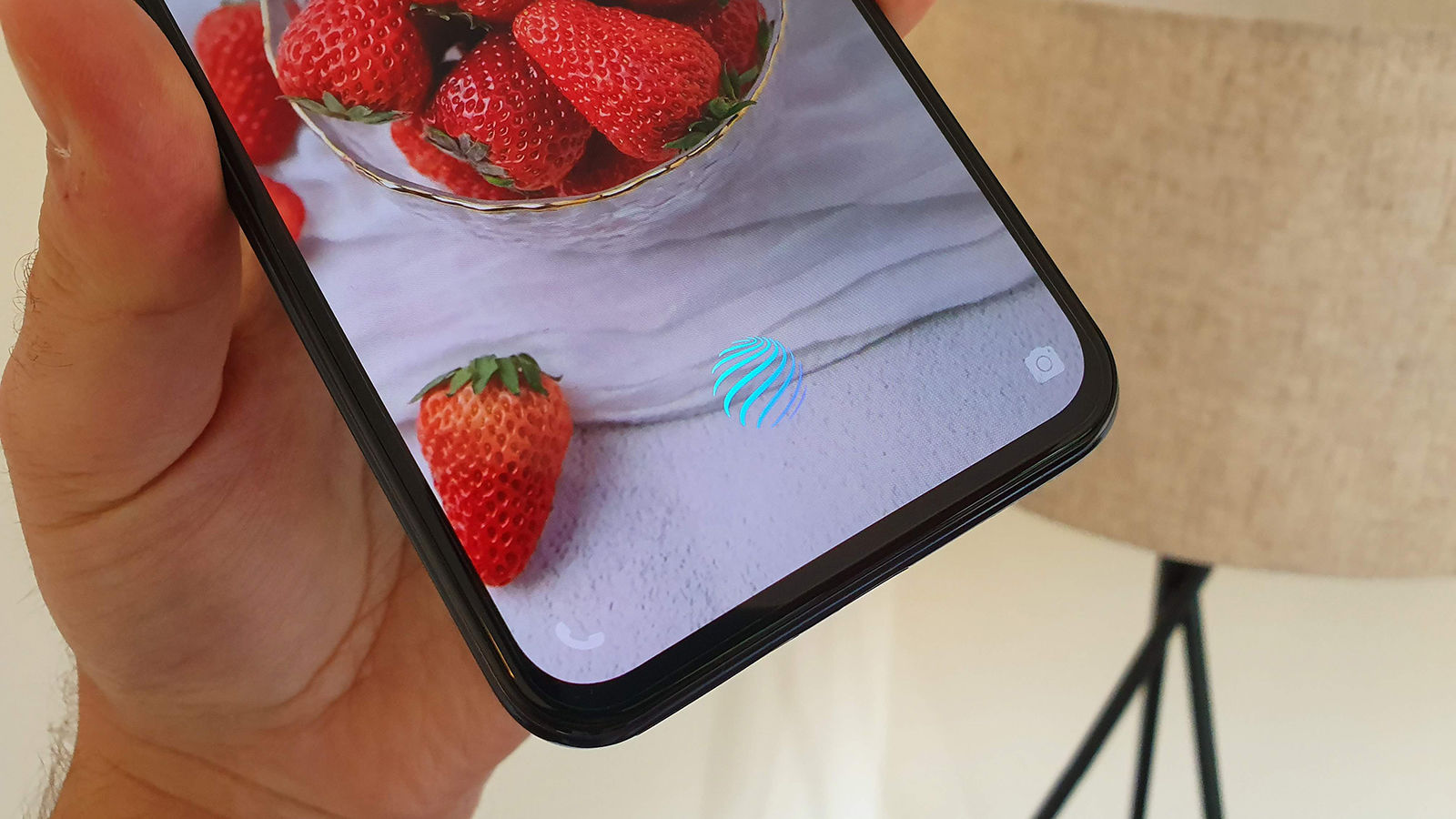 There’s a headphone jack here with some passable in-ear headphones in the box. Also included is a stark white plastic case that it is very difficult to get the phone out once it is on, but at least it’s protective.

It’s odd that there’s an assistant button on the side, and kind of annoying. On our global version it launches Google Assistant, though funny that it does considering it’s from China where Google has no presence. You can set it to launch Google Assistant or search or turn ot off completely for one press, two press or press and hold.

The phone scores 1647 on Geekbench 5’s multicore test compared to the Nokia 7.2’s 1480 and the Motorola One Zoom’s 1376. While the Moto is around the same price, the Nokia 7.2 is £100 cheaper than the V17 Pro, which is worth bearing in mind if performance for the price is your main concern.

Taking the fun out of Funtouch

The software is the Achilles’ Heel of the Vivo V17 Pro – but, we stress, from a western perspective. In China, Vivo’s Funtouch Android 9 Pie skin is clearly popular. It apes the iPhone a little too much and is perfectly functional, but if you’re used to Samsung or another popular Android OEM is the west, the V17 Pro will infuriate you as it often doesn’t feel like an Android phone.

Menus are all in different orders and the quick settings are a swipe up from the bottom of the display just like any iPhone with a home button, but unlike virtually any other Android phone. The pull-down shade is your notifications, and looks like an iPhone. You’ll also want to disable the tacky lockscreen wallpapers ASAP:

There is also no option for an app drawer, one of the best organisational features of practically any other Android phone out there. But there are navigation gestures akin to those found on Android 10 like swipe in from either side to go back, even though it’s a phone on Android 9.

Battery life is stellar, with the phone easily lasting two days use. In the Geekbench 4 battery test it went for 11 hours and four minutes before dying – an impressive score that is around as long as the Xiaomi Mi 9T lasted. 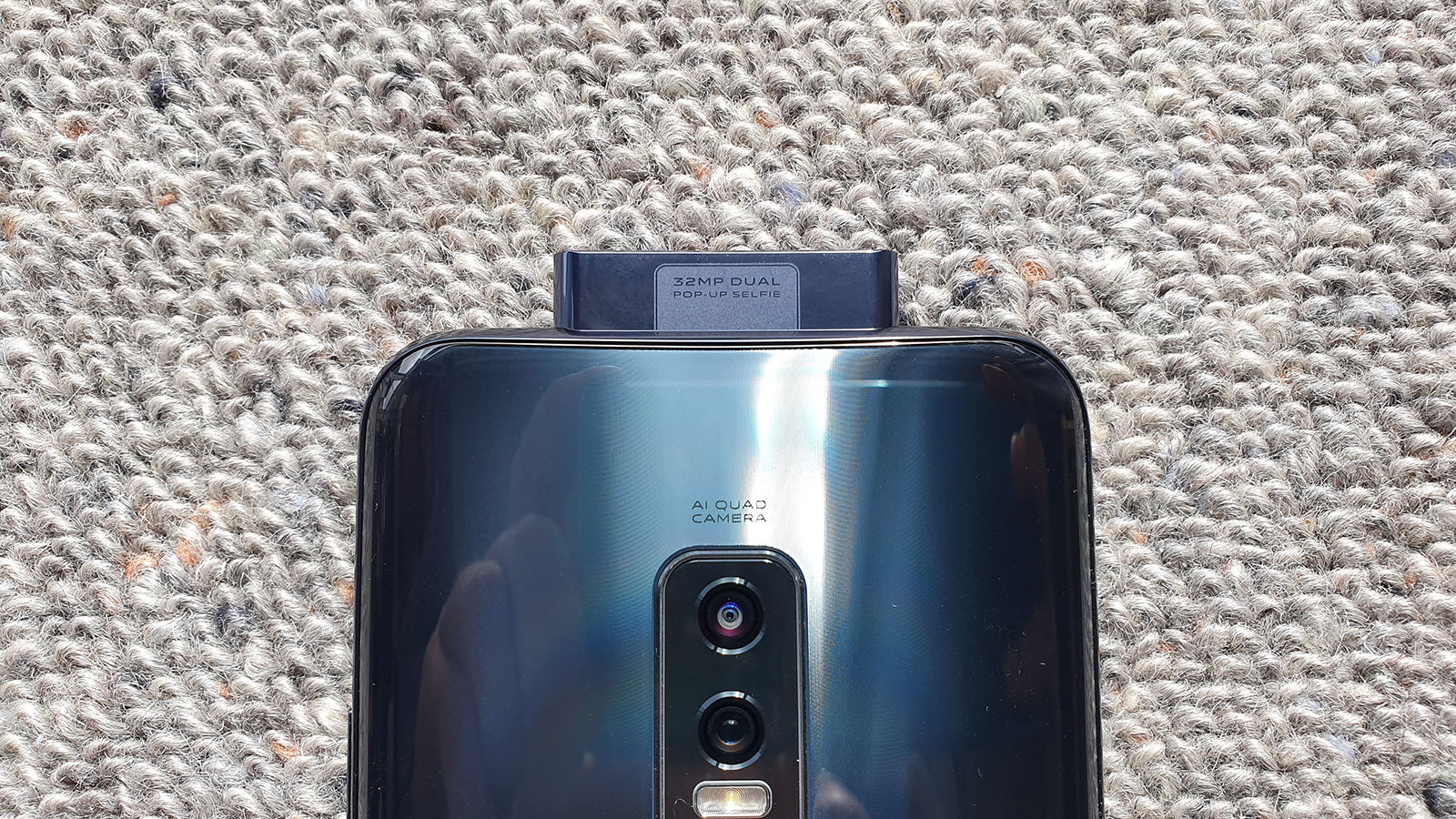 The Vivo V17 Pro is an odd phone to score – on the one hand for the price it has versatile, fun cameras with six in total giving you wide angle selfies and a surprisingly good macro mode.

On the other hand you’ll have to import it if you’re not in India and the software is amongst the most frustrating to use if you’re coming from a western Android phone. If you want a phone with six cameras, a headphone jack and great battery life then it’s a good option. But you might want to consider importing the Redmi K20 Pro instead, or perhaps opting for the Oppo Reno 2 Z.